The Big Quiz of Cats: Round one 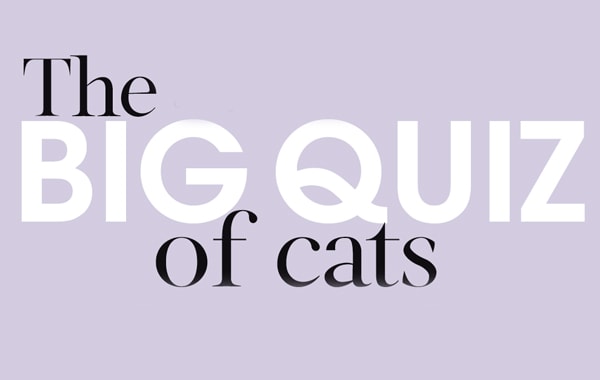 Put your knowledge of all things cat to the test...

2. In the hit movie of the musical ‘Cats’ which music star plays to the role of cat Bombalurina?

3. What is the name of the Downing Street cat who has often hit the headlines and is affectionately given the moniker of Chief Mouser to the Cabinet Office?

4. Complete the name of this hit film and book about a cat who befriends former homeless man James Bowen. ‘A Street Cat Named____’?

5. According to the English proverb, how many lives does a cat have?

6. There are lots of Guinness World Records for cats. What is the world record for the longest jump by a domestic cat?

7. What is the name of the pet cat of Argus Filch, the grumpy caretaker in the Harry Potter stories?

9. Which pedigree cat breed is described by the Great Cat Council Fancy (GCCF) as: “The ultimate glamour puss which can be found in a huge array of colours and patterns. Its long, luxuriant, flowing coat comes in a myriad of colours and its pansy-like face with big round copper, green, or blue eyes is open and sweet”?

10: Purrfect! You’re the cat that got the cream.

(Scroll down for the answers).