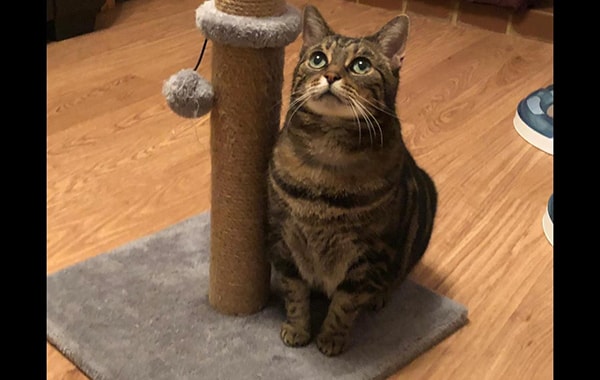 Whilst scores of cats have been adopted before her, tabby cat Honeybee has been waiting more than 200 days to find her forever home.

Eight-year-old Honeybee has been waiting patiently at the RSPCA Wimbledon, Wandsworth and Sutton branch where she has been since September last year, during which time 161 cats have been rehomed before her.

Staff at the London centre are really sad this friendly and affectionate cat who purrs incredibly loudly when she gets attention hasn’t been snapped up already.

Sarah Henderson, Animal Welfare Officer at the branch, said: “Honeybee is a really sweet and affectionate cat who loves a cuddle whilst chilling out on someone's lap. She will make someone a very loyal companion and she has the loudest, loveliest purr when she’s getting a fuss. She needs inexpensive medication to help manage an autoimmune allergic response on her tummy and sadly this means she is getting overlooked.

“Cats generally don’t tend to stay in our care for too long so for poor Honeybee to be waiting more than 200 days is really unusual. She’s such a friendly cat so hopefully someone will notice her and she won’t be the loneliest cat in Britain for much longer!”

The average rehoming time for a cat is 27 days so Honeybee has been in RSPCA care more than 80% longer than the average cat.

“She came in rather podgy and has been on a successful diet which has given her loads more energy.” Sarah explained. “The new owner will need to continue this diet and make sure she doesn’t put the pounds back on! Honeybee will ideally need an experienced owner who has had cats before and would suit a calm home where she is the only cat. She has been used to going outside and would ideally like a garden to enjoy once she's settled in.”

If you think you can give Honeybee a home, please contact RSPCA Wimbledon, Wandsworth and Sutton branch on 07944 308169 or rehoming@rspcawimbledonandsutton.org.uk