With a charming attitude, a penchant for adventure, and zero awareness of personal space, Ruben is the south west’s famous feline explorer.

If you live in the south west of England and you awaken in the night to a strange and unexpected presence, fear not, it’s very likely Ruben the cat — a fearless moggy with an unquenchable wanderlust and a flagrant disregard for personal space.

Over the years, Ruben has couch surfed his way into hearts, homes, schools, and care facilities across his hometown of Exeter, using little more than his feline allure and cunning to get by. You may already know him as ‘the cat that got arrested’ or ‘the feline with a bizarre fixation for beanbags’ from following his outlandish escapades and jaunts online.

You see, while many cats are content with simply sneaking in through the neighbour’s front gate, Ruben sees the city as his playground. His itchy feet can carry him for months at a time and the sheer volume of hilarious feats only serves to show that no door or window is safe — he’s even made it through locked cat flaps.

If there’s one thing this charismatic moggy is well-versed in, it’s wielding his charm, and his unannounced visits are usually welcomed by fans who only have to look as far as the tell-tale rip in his left ear to open their doors to him. 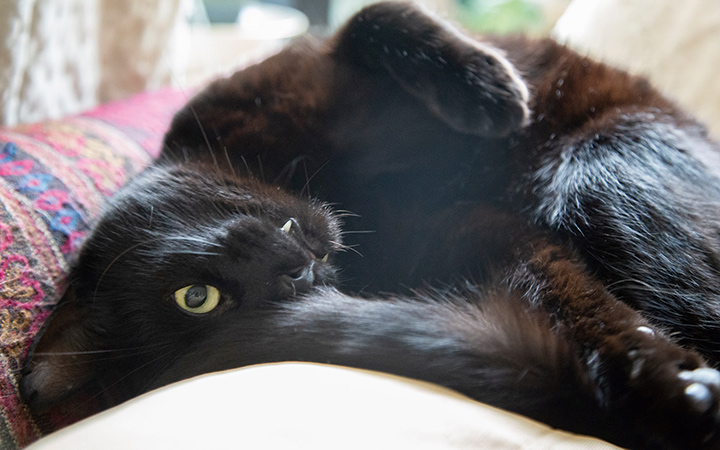 Ruben’s exploits first came to the attention of his owners, Jon and Charlotte Brammer, in 2017 when he hit the road for six weeks leaving no clues as to his destination. It was out of character for Ruben, who was previously solitary and rarely ventured far from his dinner bowl.

Yet, despite arriving home hungrier and far skinnier than before he had left, the feeling of wind in his fur was the catalyst for Ruben to realise his calling as an explorer.

“Before long, lost pet pages across the internet were littered with pictures of him,” said Jon. “We’d scroll through and it would just be pictures of Ruben in people’s houses. We couldn’t believe it at the time.”

With repeated enquiries from members of the public and ad-hoc disappearances mounting, Jon and Charlotte set up a Facebook page and website to keep track of Ruben’s whereabouts. Through his online channels, Ruben’s celebrity grew in Exeter. After overcoming the initial shock, the residents of the city who are fortunate enough to be a stop-off on the intrepid explorer’s travels are often very pleased to see Ruben — even those less familiar with cats report how they fall for his feline charm.

Photos of his sightings appear regularly with comments from those he has temporarily moved in with! Before he finds his way home to Jon and Charlotte again.

“There have been accounts of people waking up and finding Ruben staring at them in their bed,” said Jon. “We share it all on his Facebook page, along with an up-to-date map of all the places he’s been.”

Soon enough, his aimless wanderings and the uniquely witty tone of Ruben’s voice online catapulted him, along with his brother and fellow housemate Bryan, to online stardom, with fans as far as the United States.

Jon and Charlotte are keen to reassure people that Ruben isn’t in any danger.

“We tried to keep him inside,” continued Jon, “but it just became impossible to do so. He is a cat of his own free will and being indoors just made him miserable. Forcing him to be a housecat would simply do more harm than good.”

Thankfully, they describe Ruben as a cat with street smart. “He even looks both ways before crossing the street,” notes Charlotte.

In fact, exploration is in Ruben’s blood. His mother was an avid explorer who came into Jon and Charlotte’s lives when she arrived on the doorstep of a mutual friend’s house, unchipped and pregnant. Even childbirth wasn’t enough to dissuade her from her love for the open road and she had barely recovered before she began making routine trips out the house to smuggle food for her new-born kittens.

For Jon and Charlotte, seeing these audacious kitties in action is proof that felines may be shrewder than humans give them credit for. Jon said: “People will argue about animal intelligence but having cats has totally opened up my eyes. The bond that we have with them is incredible. Ruben can spot us a mile away and he never seems to have any trouble remembering his way home.” Jon and Charlotte also use Ruben’s fame to raise awareness and money for cat charities.

So, what of the future for Ruben? Ruben did enjoy a small hiatus from his explorations, which was perhaps something to do with the fluffy beanbag purchased in a desperate bid to coax him out of a stranger’s house. Recently though, Ruben’s wanderlust has returned with vigour and the adventure cat has been out on the road again. 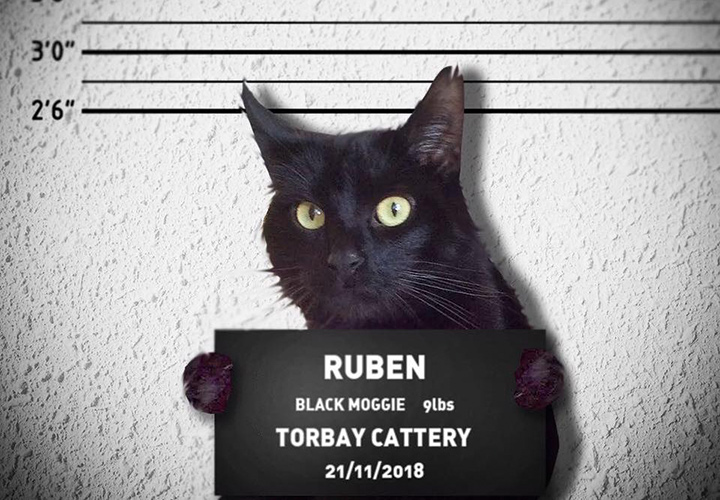 Ruben’s first big adventure happened at the age of five, after his paws carried him four miles away to a local primary school. Ruben whiled away the hours in the reception area, greeting students as they entered and left for the day, spending a total of six weeks on the school grounds. After his departure, the school held an assembly in his name — it was to be Ruben’s first taste of the spotlight.

Ruben’s farthest and most daring adventure yet took place in Torbay — a staggering 25 miles from his doorstep. But how did he get there? Ruben’s cat-like curiosity got the better of him one day when he wandered into a crime scene at a house not far from his own. His timing really could not have been more impeccable, for the police raided the house that very day. Amidst the confusion, he was swept up and taken to Torbay police station along with the occupant of the house. Thankfully, no charges were pressed against Ruben and he got away scot-free!

Given Ruben’s affection for children, it came as no surprise when he headed in the direction of the local children’s home. It didn’t take long for staff and residents to fall head over heels for the mischievous moggy. Soon enough, a quick stop for lunch and cuddles turned into temporary residence. Given the positive impact Ruben was having on the children, Jon and Charlotte gave their permission for him to stay until he was ready to come home, but owing to the amount of fuss he received, it was some time before he left. 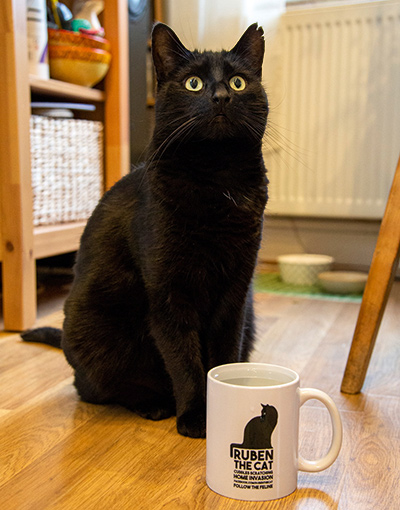 • Dislikes – being told what to do