When sociable cat Billy brought home a note to his owners from a friendly neighbour, it started an extraordinary lockdown friendship. Michael Hallam takes up the story.

Image: Billy with the note in his collar.

Social distancing has taken over our lives during the past year. The Coronavirus pandemic has forced us away from other people, as we show how much we care about each other by staying apart.

We’ve all had to find new ways of keeping in touch, and for one couple that way has remarkably become their cat. While cats get out more than we do these days, feline Billy has become a lockdown postman, delivering notes between an unknown friendly neighbour and his owners Zack King and Olga Shipunova, from Hackney in London. 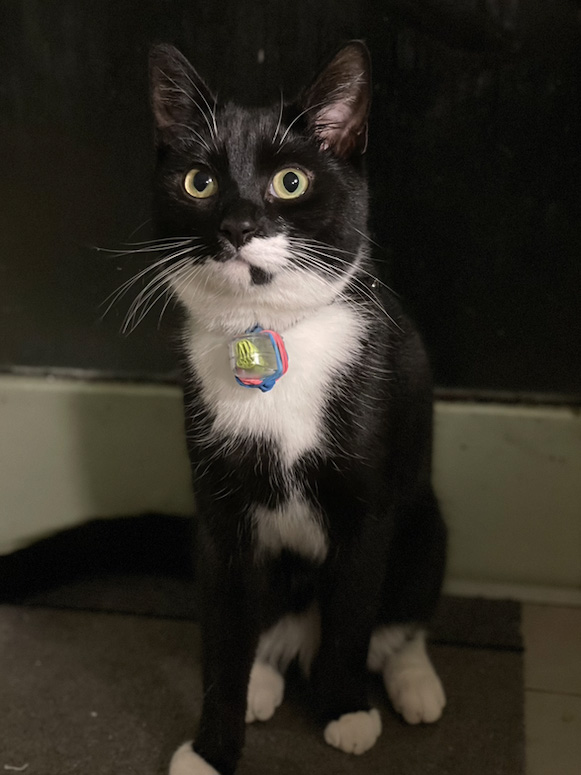 “One day, my girlfriend noticed that Billy had something attached to his collar,” explains Zack. “It was a small note, tightly folded up, wrapped in cling film, and attached with a wire tie that didn’t bother him. We opened it and it was a note from a neighbour just saying: ‘Hi neighbour, just want to let you know that your cat is always coming round mine, he’s really sweet, I love him, and just wanted to let you know he likes to come and say hello to people’.

“It was unexpected and quite delightful really, especially as the nights were drawing in and we were in lockdown — it was nice to have someone reaching out to you through your own cat.”

Zack and Olga replied with a note of their own, attaching it to Billy’s collar and waiting to see if their feline companion would visit their neighbour again. He did and from there, a penpal style relationship blossomed. Zack and Olga have exchanged regular notes with their neighbour, with Billy acting as a feline postman.

“At first, there was just a few niceties,” says Zack. “We can’t fit a big note to him, it’s just scribbles on paper, so it has been asking how you’re getting on with lockdown and a little bit about what we enjoy doing. So there were Netflix recommendations, podcasts (because Olga loves her podcasts), and the two of them shared home cooking suggestions.

“We tried out those recommendations. We did a squid stew which was actually really delicious and we let them know about using wasabi paste into mash potato, so it was just little things like that. Life can be a bit of a grind when we’re all going through this, so it was nice.” 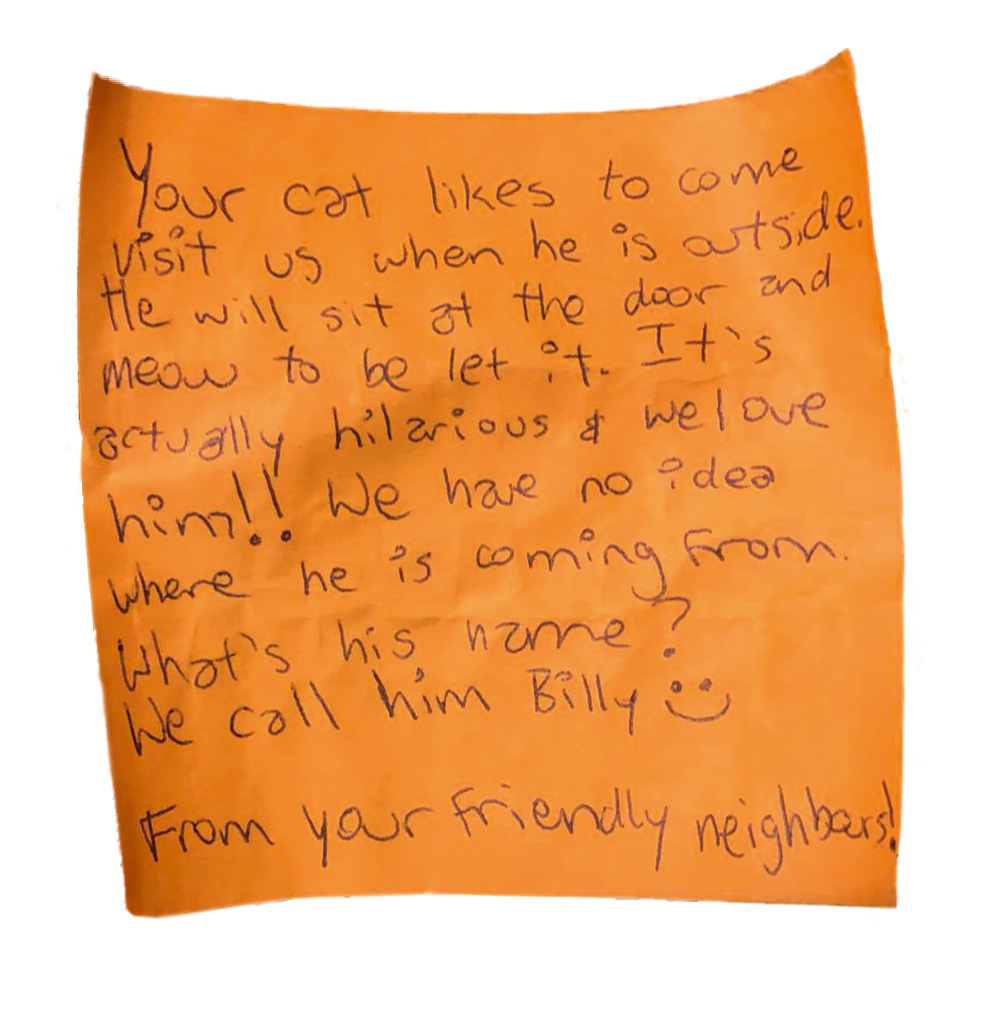 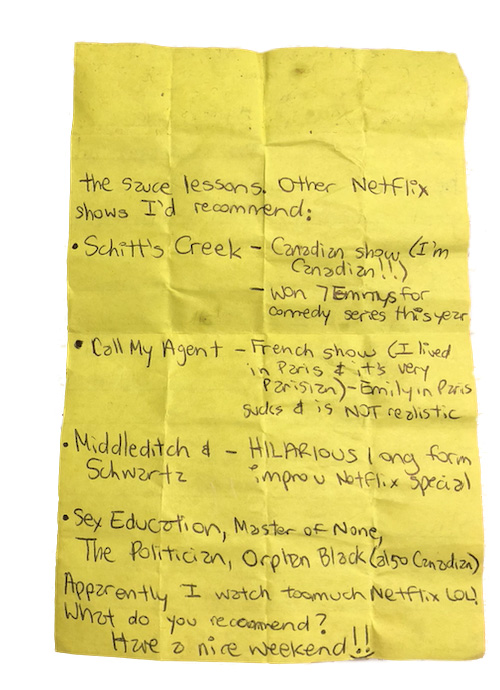 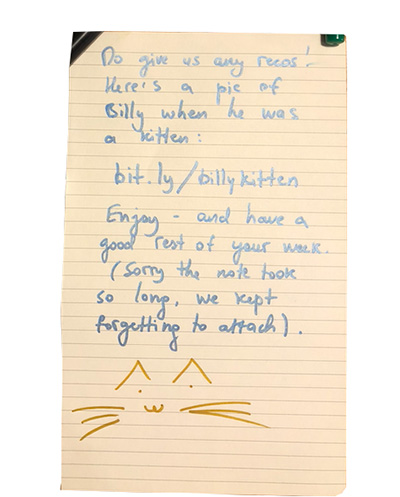 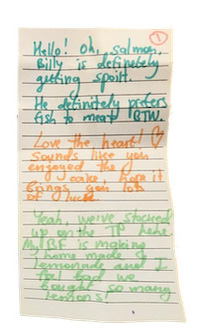 The original note (orange)  and then further notes where the couple have chatted and shared recommendations.

As their communication grew, Billy’s collar was even fitted with a device to make it even easier for him to carry the notes. While Zack and Olga don’t know who their neighbour is, they think this penpal style friendship has been a refreshing experience.

“We live in a world of instant communication but not knowing who this person is, where it is coming from, or if it is going to come, takes you back to a place of less expectation, which is nice as you saviour it more.

“We could of asked questions about who the person is, but they haven’t asked questions of us. We know they are Canadian and live with friends, possibly students but I don’t know, and we’ve told them a bit about us; Olga is originally from Russia and a few top line details, but it is nice not knowing who they are — if we knew where they lived and their phone number, there is not really a purpose for a delivery cat anymore!”

So, when the pandemic is over and people can meet up again, will Zack and Olga meet their friendly neighbour in person?

“We’re enjoying it in the moment, rather than planning to meet up, but you never know,” says Zack. “It would actually be quite nice to meet up, but there is no expectation there.” 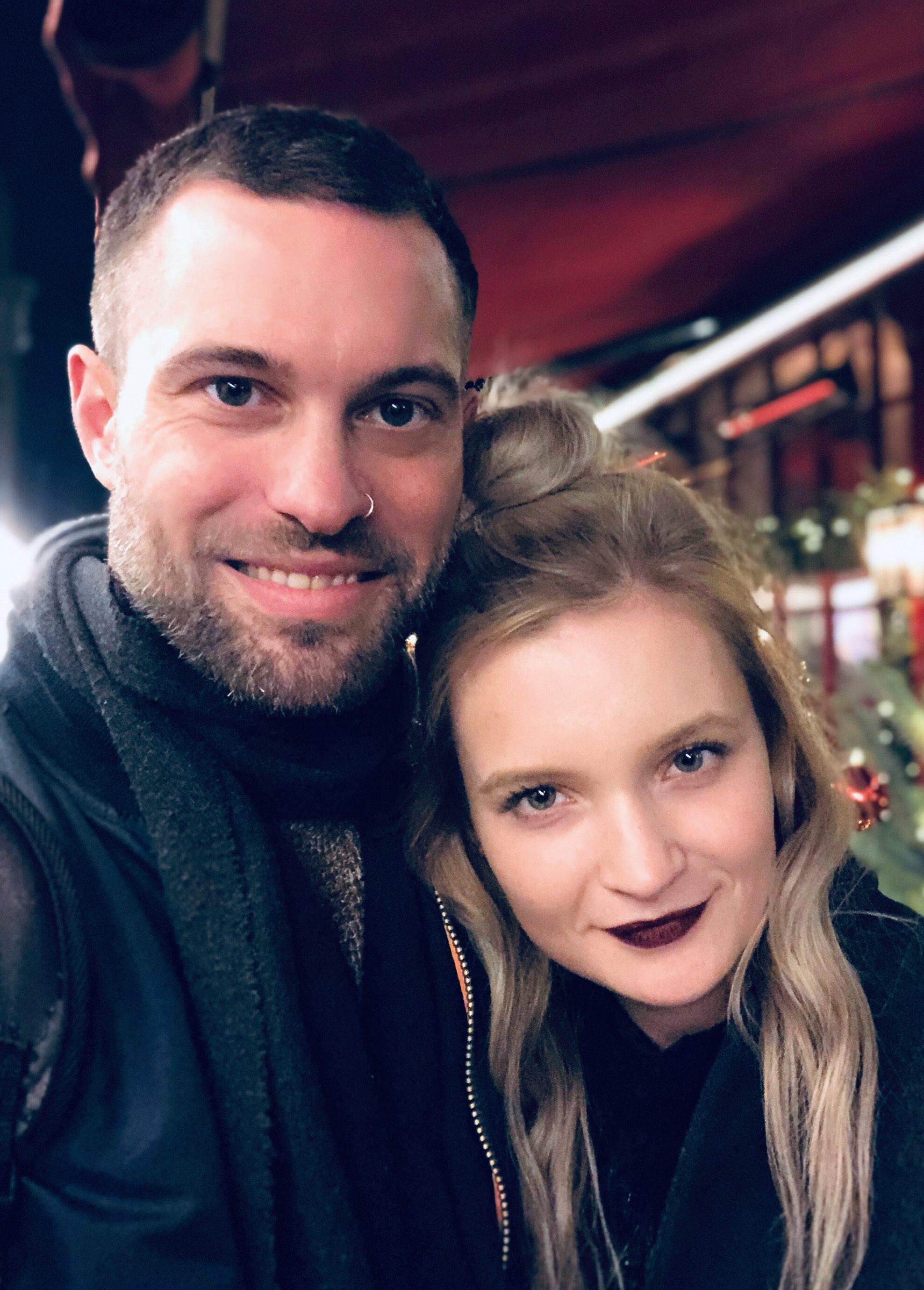 A love of cats

The story of Billy the postman captured the nation’s hearts when Zack shared it on social media and it went viral. There was an incredible reaction from people and it was picked up by the mainstream media with Zack appearing on BBC Radio 1 with Greg James and in national newspapers.

“It’s a bit mad to be honest!” says Zack. “It’s a flash in the pan, just a nice story, and I am happy for people to hear about it.

I would encourage it if people are in a similar situation; if they know their cat visits their neighbours and you can attach a little something in a way that won’t annoy or hinder the cat, it seems like a good idea.”

Zack and Olga rescued Billy in 2019 after he was part of a litter that was abandoned outside a veterinary practice. He has been with them throughout the lockdown period and, like so many cats throughout the country, has provided so much joy through these tough times to them both — and their neighbour, of course! 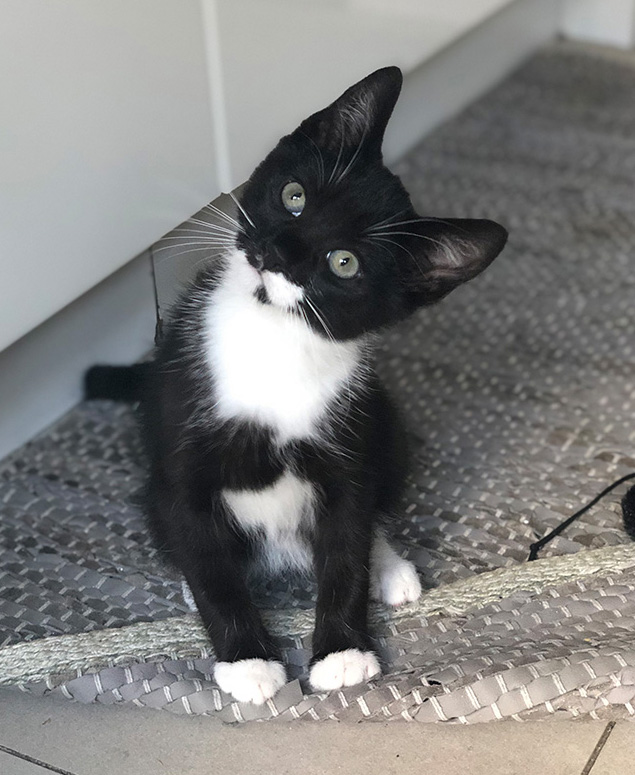 Billy as a kitten

“Billy has been absolutely great,” comments Zack. “Regardless of receiving the notes, he is such a joy. He’s an independent character, loving when he wants to be but it’s on his terms, and that’s what I love about Billy and cats in general. Cats have evolved to grow along with us. They like the look of us and hanging around with us. It’s all on their terms and that’s what I really like about cats — Billy really exemplifies that.

“He has been joyful and sweet. He loves to cock his head to the side and he gives you funny looks sometimes. It’s been a real lift having him during these times and he cheers me and Olga up — the sharing of the notes with a neighbour has just been the icing on the cake really.”