“Nala helps to keep the memory of Charlotte alive”

The fact that Nala is a very special cat has not gone unnoticed. In August last year, she won the Outstanding Rescue Cat honour at the National Cat Awards 2019.

The awards are organised by Cats Protection and celebrate the difference cats make to their owners’ lives. While there could not have been a more fitting or deserving winner, no award could ever fully capture what Nala means to Alex Eades and her family.

Nala was an inseparable companion and comfort for Alex’s daughter — Charlotte — as she fought the bravest of battles against a brain tumour for two and a half years. Tragically, Charlotte died aged just 19.

Still a cherished part of Alex’s family, Nala is a big part of Charlotte’s memory and legacy for the family, who saw the pair grow up together and develop a love that, even in the most awful of times, was a source of happiness and joy.

“Back in 2004, we went to the local RSPCA centre and Nala was this absolutely beautiful 10-month-old kitten,” says Alex, from Brighton. “So, all behind Charlotte’s back, we got checked out and a few days later, when we knew it was okay and we had got Nala, I said to Charlotte: ‘We’ll go up to the centre and see what pussycats are there’.

“She absolutely fell in love with Nala and I just said: ‘Well, she is ours! We’re going to be taking her home in the next few days.’ Charlotte was only seven at the time and she became besotted with her. They had many years together before Charlotte became ill. She bought Nala a pram and would wheel her round the garden — why the cat didn’t mind, I don’t know! They had a really, really close bond.”

It was at the age of 16 that the first signs of the disease appeared. 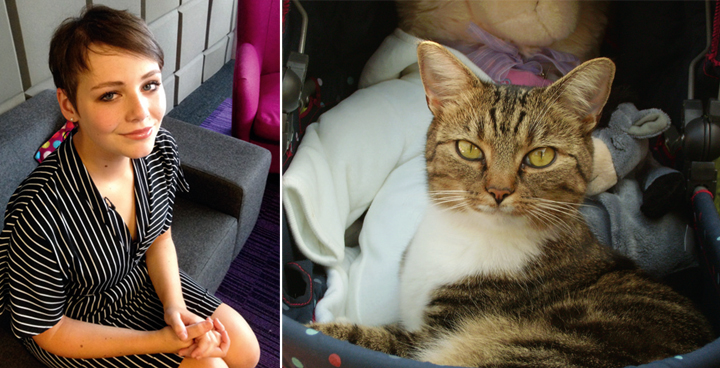 “Charlotte was diagnosed in July 2013 on the night of her prom with a brain tumour,” says Alex. “She lived for another two and a half years and Nala was just always there. Charlotte was so ill and in bed a lot, and Nala would lie there and comfort her — especially when we knew the end was coming.

“Even when Charlotte was paralysed, Nala would come on the bed every morning, even though Charlotte had difficulty trying to stroke her. They were just inseparable.”

Charlotte faced the disease with incredible courage and created a YouTube channel to share her story on video and provide inspiration and comfort to others — and her feline companion was there.

“Charlotte recorded her YouTube videos often with Nala featuring,” says Alex. “If I play Charlotte’s videos now and Nala is there, you can tell, as she sniffs at the screen, that she recognises Charlotte’s voice, which is a great comfort.”

“Nala helps to keep the memory of Charlotte alive. Even now, Nala will go and sit in Charlotte’s chair, which nobody really sits in out of respect more than anything. Obviously Nala will pass, as she is 16 this January, and that will be very difficult as she has always been there.”

The family have ensured that Charlotte will never be forgotten having set up a charity in her name to fight glioblastoma, the brain cancer that Charlotte suffered from. In a remarkable achievement, the charity has just hit the £200,000 mark for fundraising.

“That money goes direct to King’s College, where there is a lab named after Charlotte, and we negotiate what the money is spent on — we have recruited a biomedical scientist as what we’re trying to do is be able to turn test results around for people with brain tumours within five days.”

As they raise awareness, the family have kept Charlotte’s YouTube channel going.

“I remember Charlotte just before she died: ‘Mummy can you and Miles just do one final video and then close the channel down, as no one will be interested in that’. After she died, my son, Miles, said: ‘We’re not closing it down.’ The channel has over eight million views and even when Miles and I do videos now, Nala tries to get into the shot.”

After everything Nala has given to her family, Alex nominated her cat for the National Cat Awards last year and couldn’t believe it when Cats Protection awarded Nala the Outstanding Rescue Cat.

“When I sent the nomination off, I honestly didn’t think anything of it,” says Alex. “I couldn’t believe it when Nala won. The award ceremony was an incredible day out and my son is an Arsenal fan and David Seaman presented the award, so that made his day.”

Nala will never know that she won an award, but she couldn’t be more deserving. When it came to making a difference to a young woman facing terminal illness, and continuing to help her family cope over three years on, Nala’s love is very special indeed.

Set up in Charlotte’s memory, Charlotte’s Battle Against Glioblastoma (BAG) is a registered charity that raises funds for research into, and awareness of, this rare form of brain cancer. Watch Charlotte’s channel (search Charlotte Eades on YouTube) and to find out more about the great impact the charity is having, visit: www.charlottesbag.com 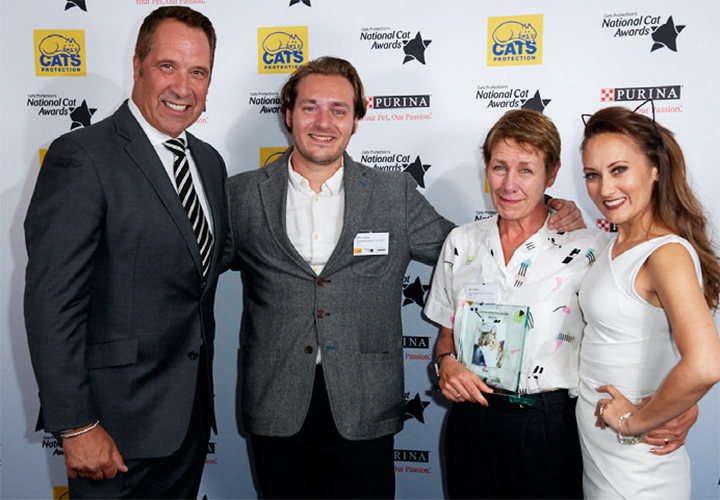 Cat lovers across the UK are being invited to nominate their incredible felines for the National Cat Awards 2020. Run by Cats Protection, the annual event celebrates amazing moggies with five categories: Hero Cat, Most Caring Cat, Furr-ever Friends, Outstanding Rescue Cat, and Purina Better Together award.

Nominations are now open and owners have until Thursday March 12, 2020, to submit their entries. Visit www.cats.org.uk/national-cat-awards