Charities urge owners to neuter their pets this kitten season March through to September sees a boom of kittens born in the UK. Charities are urging owners to neuter their pets to help put an end to this feline welfare crisis.

There’s no doubt about it, kittens are cute — but the very real, ongoing welfare crisis due to too many litters being born is not. From spring, and mainly through the summer months, cat charities find themselves inundated with unwanted litters and pregnant queens.

Georgina Costi, cat welfare coordinator at animal welfare charity Mayhew, says: “Of course kittens can be born all-year-round, but we see a marked rise in numbers through the spring and summer months, which is why it’s called ‘kitten season’.”

Georgina continues: “During kitten season, our shelters are jam-packed with litters, and we constantly receive phone calls reporting more. We often have litters born in our care, but the kittens don’t find homes until they are five to six months old as, sadly, there are just too many kittens and not enough homes.”

“Also, rehoming numbers really drop in the summer months due to people going away on holiday and wanting to wait until the school holidays are over before adopting. So, throughout the summer months, not only do we have a huge jump in admissions, but a drop in adoptions. If cats aren’t rehomed, we don’t have space for more. But, of course, if we get an emergency, we just have to cope.”

During the height of kitten season, litters are often found dumped or abandoned. “People are literally dumping kittens in bins,” says Georgina. “Sadly, too many people still believe that letting their cat have a litter of kittens is good for them, or raising kittens will be easy and a quick way to make some money. It’s not true; there are too many litters out there. Plus, raising them properly, ensuring they are vet-checked and up-to-date with treatments, is costly; you can’t make money out of kittens. This means, when people realise they can’t home their litters easily, they abandon them. It’s a very real, big, and ongoing problem.”

All pregnant cats and kittens that come into Mayhew’s care are vet-checked, treated for fleas and other parasites, and neutered. Georgina says: “Many of the kittens that come into our care are in really poor condition; they are often riddled with fleas, which, if not treated, can be fatal as it puts a strain on the heart, due to the amount of blood they lose due to the fleas feeding. Pregnant cats and nursing mothers are often not much better off as they struggle to eat enough to sustain themselves and a nursing litter.

“We also find ourselves having to hand-rear kittens as the mother has abandoned them. This is never easy; it’s touch-and-go, and there’s not always a successful outcome. It’s very sad and puts a big strain on charities.”

To combat the crisis, charities urge owners to neuter their cats. “It’s the way forward,” says Georgina. “At Mayhew, the vast majority of cats we take in are strays. Unfortunately, there are so many strays needing help that we are often unable to take in unwanted cats from family homes. We have to prioritise those most in need, which is usually strays. The vast majority of strays that come into our care are unneutered; this emphasises the point that, if you want your cat to stay at home with you and not wander, get him/her neutered!

“If you are thinking about having your cat neutered, don’t wait; mating season is already underway. If you are worried about the costs involved, many charities, including Mayhew, have programmes and initiatives available to help.”

Are you considering getting a kitten?

If you are thinking about bringing a kitten into your home, consider rehoming from a charity — there are so many kittens and young cats needing families. Don’t feed the kitten farming industry (which is just as big a problem as puppy farming) by purchasing from online buying/selling sites — you simply don’t know what you are getting.

Don’t be put off by a charity adoption fee — this supports the charity and helps ensure all kittens are health-checked, have had a behaviour assessment, are neutered, and have received up-to-date veterinary treatment. Plus, the charity will offer ongoing support and help you settle your family member into his new home. 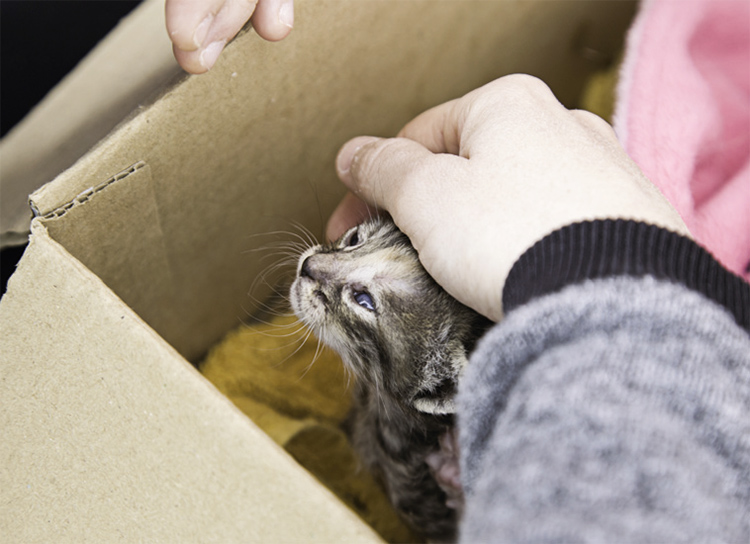 What to do if you find an abandoned litter

Mayhew offers some advice on the steps you should take if you find an abandoned litter of kittens: