Having to care for a newborn litter when you’re a stray cat is no mean feat, as poor Tuna recently found out when she and her kittens got themselves into somewhat of a pickle!

Two-year-old Tuna had settled down in a carefully chosen garden shed to give birth, where she was soon found by the owner of the house. All was going well until a stray male cat also discovered her hiding place, and attempted to chase her away.

In desperation, Tuna moved two of her kittens behind a garage wall, intending to create a safe space away from prying eyes and peeping Tom cats. However, the stray male continued to hang around the shed, preventing Tuna from returning to collect her two remaining kittens.

She was therefore only able to feed and care for the two kittens behind the wall, and was effectively forced to abandon the others. Luckily, the owner of the house soon noticed what was going on, and called Mayhew for help.

Animal welfare officer, Tania Mazzoni, went straight out to investigate, and found the two tiny kittens all alone in the shed. She carefully rescued them and placed them in her van before going to look for Tuna and the other two kittens, who were still hiding behind the garage wall. 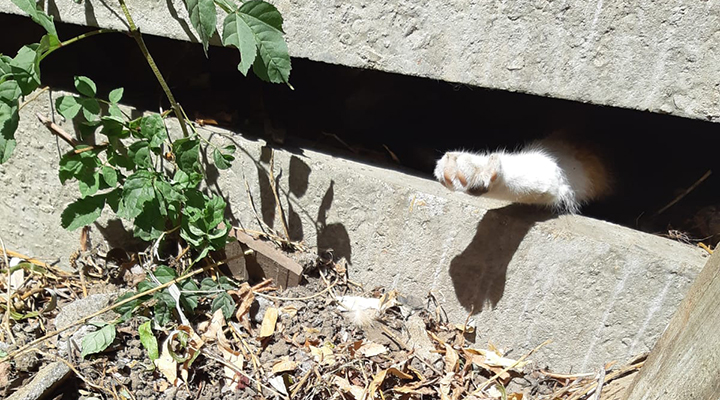 Despite Tuna’s obvious worry for her kittens, it took Tania over an hour to coax her out from under the wall. After many attempts, it was an open tin of tuna that finally proved too delicious to resist!

With Tuna out in the open and happily munching on her namesake, there was enough room for Tania to reach under the wall and scoop out the last two kittens. The litter were aptly named Mackerel, Anchovy, Sardine, and Koli, and were taken straight back to Mayhew, where Tuna was delighted to be reunited with all four of her babies.

The young family settled down in Mayhew's Kitten Block with some food and blankets to recover and refamiliarise themselves with each other, before having a gentle intake exam. Thankfully, apart from being extremely hungry, Tuna and all four kittens were in good health, and so after a couple of weeks being cared for by the expert Cattery team, they were ready to go to a foster home, in preparation for finding their forever homes.

The calico family’s foster carer has said that they have all settled in well, and that Tuna is an incredibly proud and affectionate mum now that she has all four charges back under her. When Tuna is ready and her kittens are old enough, they will be neutered before they are placed up for adoption.

If you are interested in giving Tuna, Mackerel, Anchovy, Sardine, or Koli a new home when the time is right, please keep an eye on Mayhew's Rehoming pages, where they will upload their profiles once they are available.

Please note, Mayhew are not able to take any adoption enquiries about any animals in advance of them being listed online, and cannot reserve an animal for anyone before the animal appears on the website.