Miraculously, Ollie escaped from his ordeal with no injuries and was happy to be reunited with his owner.

A member of the public spotted the cat perched on a small piece of concrete in the river at Priory Wharf near Woodside Ferry Terminal on Tuesday April 13 and alerted the RSPCA.

Animal rescuer, Inspector Leanne Cragg was sent to the scene and could see the frightened cat on a small wall in the river.

There was no access down to the area and as the light was fading and the tide was about to come in, she called Merseyside Fire and Rescue for help at about 8.30pm.

Firefighters decided to summon the help of their marine rescue unit and the team used a boat to get close to the cat, called Ollie. One of the firefighters then used a water sled to access the frightened feline which he managed to safely grab.

Ollie (aged one) was taken to shore and placed in a cage which was then winched up the river wall to Leanne - much to the delight of his owner Emma Tarpey (26).

Leanne said: “It was a fantastic team effort and I am so grateful to Merseyside Fire and Rescue for their help.

“I was concerned for the cat’s safety as I knew the tide was about to come in and it gets very high in that area and it was also getting dark.

“There was no safe route down to get to Ollie so the fire crew suggested using their specialist water team who did a great job.

“As the firefighter got close Ollie moved towards him and meowed and was happy to get into his arms - he knew he was going to be safe.

“Emma was delighted to have Ollie back and it was so nice to see the pair reunited.

“He is a very lucky cat - it was such a big fall and to come through the whole incident unscathed is amazing.” 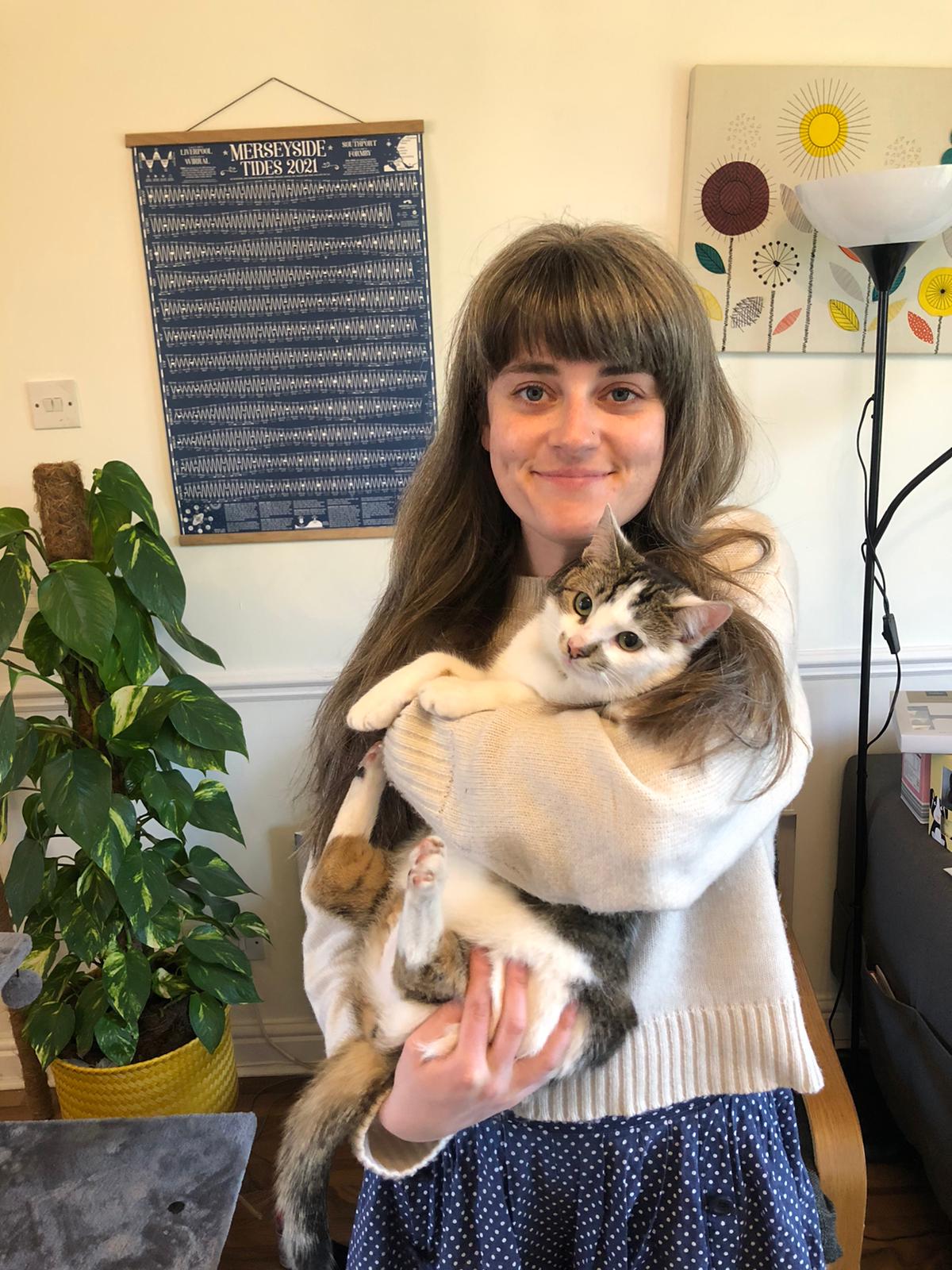 Emma (pictured), who lives nearby with partner Connor Grogan (25), said Ollie had been outside with his brother Parsley and tended not to wander far as he is deaf.

She was only aware of his predicament when a neighbour saw what was happening and went to tell her.

Emma said: “I was so shocked when I found out and I ran straight over to where he was and Parsley was nearby meowing to him. I was so happy when the fireman scooped him into his arms.

“I think he certainly lost one of his nine lives during this incident and as he doesn’t go out much, we are going to keep him as a house cat to protect him, especially as he is deaf.

“I am so grateful to everyone who helped in the rescue. The RSPCA and fire crews were fantastic and I am just grateful to the person who spotted him and reported the incident.”

Emma said Ollie is already back to his usual self-playing with his brother and his favourite ball and the first thing he did when he got home was eat food before having a long sleep.

Merseyside Fire and Rescue Station Manager Ronnie Duffy said: “This was a great – and very different - animal rescue. Our marine unit was instrumental in devising and carrying out a plan to lift the cat to safety.”

To help the RSPCA continue rescuing, rehabilitating and rehoming animals in desperate need of care please visit their website or call the donation line on 0300 123 8181.