Every stamp tells a story If you fancy a new hobby, why not try stamp collecting? Focusing on issues with a feline theme, you’ll find it anything but dull! It takes up little space and is fairly inexpensive with many stamps costing only a few pounds — some even less.

It’s generally accepted that the first postage stamps appeared in Great Britain in 1840. Other countries followed suit, often showing images of monarchs and rulers. However, Afghanistan’s first stamps, issued in 1871, had a lion’s head to represent Sher Ali, the ruler at that time, because, as a strict Muslim country, a human image was prohibited.

Another early set of definitive stamps to feature a big cat were issued by the Federated Malay States in 1901. The national animal, a Malaysian tiger, proudly took centre stage; different colours were used for different denominations but the image remained in use for the next 33 years. Sadly, the species — nicknamed ‘Uncle Stripes’ — is now one of the most endangered of all the tigers.

It wasn’t until 1930 that the first domesticated cat appeared on a postage stamp. A Spanish issue commemorating the record-breaking flight of Charles Lindbergh from New York to Paris three years earlier shows Patsy, the aviator’s pet, sitting in the bottom right-hand corner watching as his plane takes off. Patsy had accompanied Lindbergh in the air, but he made the decision to leave her at home on this occasion, saying: “It’s too dangerous a journey to risk the cat’s life.”

Since then, thousands of stamps featuring felines have appeared, including commemorative issues, breed studies, fictional felines, and cartoon cats. Even cats in art are celebrated, although it could be said that many of the stamps are miniature works of art in themselves. 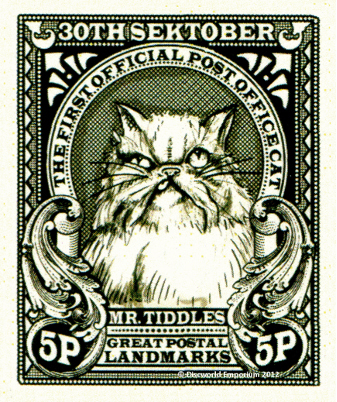 ‘Cinderellas’ — unofficial postage stamps such as this one, celebrating fictional feline character ‘Mister Tiddles’ can also be very collectable. 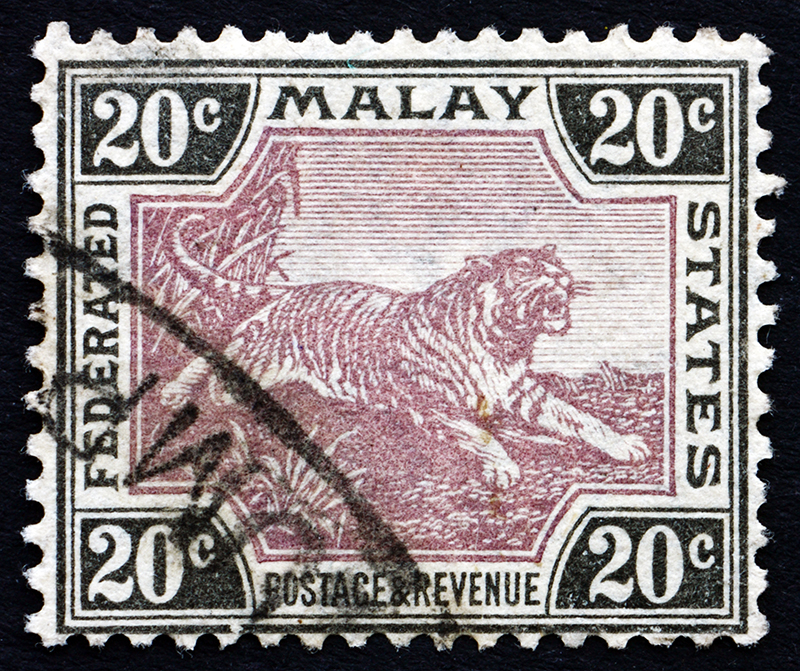 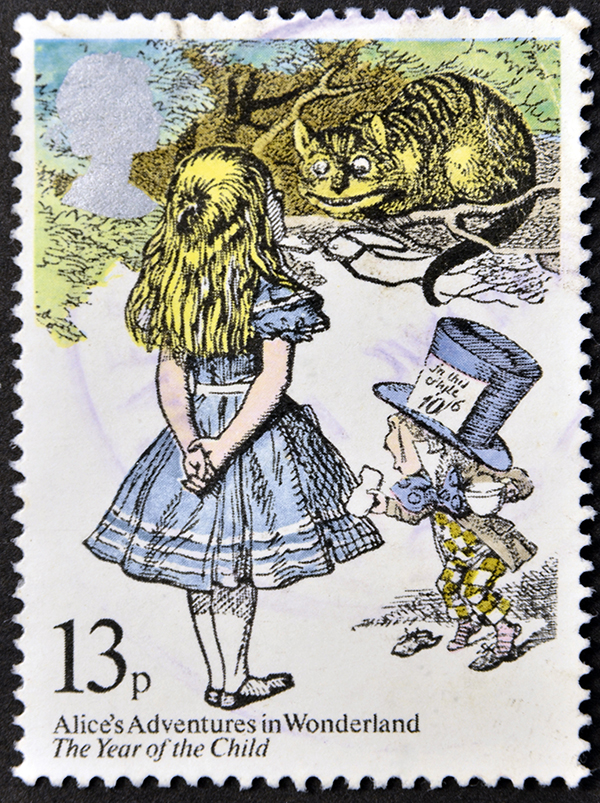 Starting your collection You don’t need a lot to get started on this absorbing hobby:

● A stamp album — this protects your  this protects your stamps and keeps them all in one place. Stamps should never be permanently attached to the pages; gummed hinges are still used, but a stockbook type album with transparent pockets and protective interleaves shows them off equally well, is less fiddly, and it’s much easier to move them around if you want to change their order.

● Tweezers — not the sort used to pluck eyebrows or remove splinters, but with flattened tips (‘spade’ ends) which won’t damage stamps when you pick them up.

● Stamps — you can kickstart your collection with a packet of 100 feline-themed stamps for around £10.

Adding to your collection

Stamp dealers still exist in high street shops; one of the biggest and most famous is Stanley Gibbons in London, with over a million stamps in store. There are also stamp fairs and auctions, and you’ll find lots of sellers online too, as well as plenty of information about collecting.

● In addition to official postage stamps, you can also collect ‘cinderellas.’ These are unofficial stamps not issued by an approved government postal service, such as that of ‘Mister Tiddles’ the Post Office cat in cat-loving author Terry Pratchett’s Discworld book ‘Going Postal.’

● Stamp catalogues can help in identifying your stamps but can be pricy to buy. Local libraries often have copies in their reference section, which you can consult for free.

Every stamp tells a story…

While tracking down stamps to add to your collection can be an entertaining challenge in itself, each one has a tale to tell, which can be equally fascinating to research. 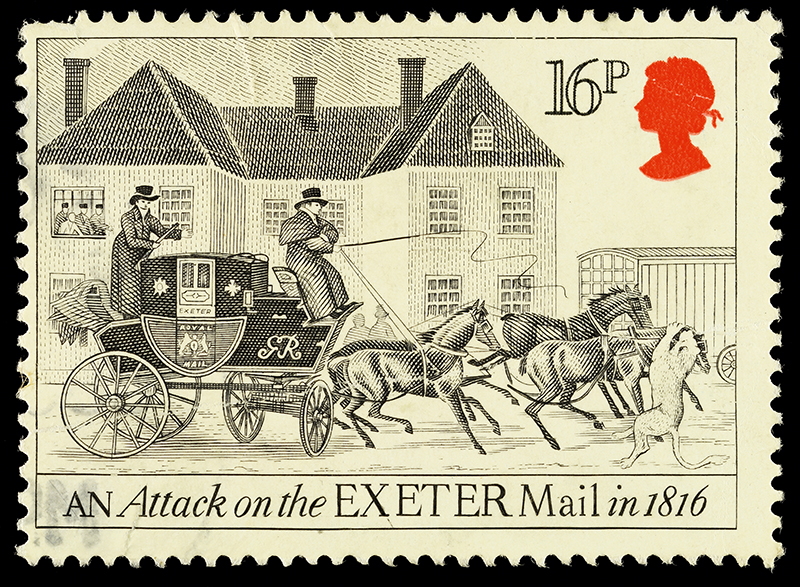 The attack on the Exeter mail coach.

● Lion at large
A 1984 set of stamps commemorating the introduction of the Mail Coach service shows dramatic scenes of coaches battling the elements; but surely the most bizarre incident is that of the attack on the Exeter Mail Coach in 1816. Passengers inside thought that the animal trotting alongside was a large calf; it was only when they pulled into an inn that they realised it was a hungry lioness that had escaped from a travelling menagerie. 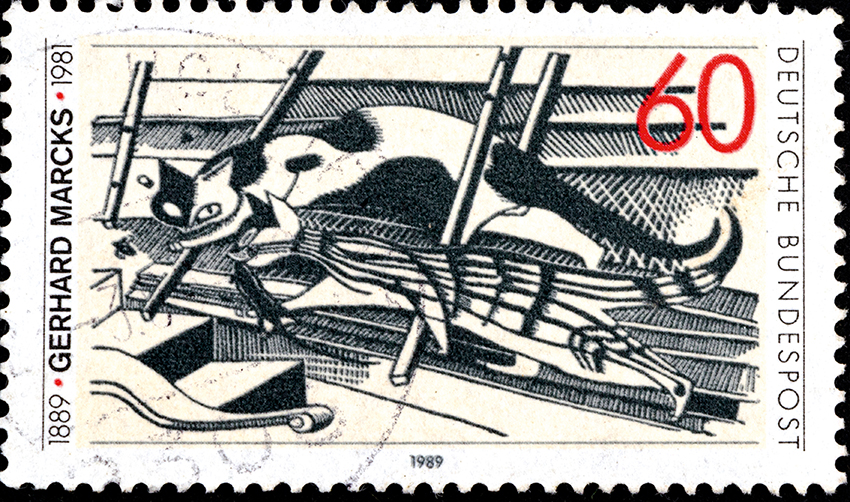 Marcks’ ‘Cats in the attic.’

● A-hunting we will go
It’s in the nature of cats to hunt; as predators, it’s all part and parcel of who they are. A 1989 German stamp commemorating the centenary of artist Gerhard Marcks’ birthday shows the 1921 woodcut ‘Cats in the Attic’; just one of his many artworks featuring cats, it captures perfectly their graceful sinuous movement and sense of satisfaction following a successful hunt.

An equally striking image of a cat that has been hunting appears on a 2012 stamp issued by the Togolese Republic, part of a set celebrating the art of Picasso. But ‘Cat Devouring Bird’ is far grimmer in tone and much fiercer than Marcks’ pair of delighted mousers, its tone doubtless owing much to the year it was painted, 1939. Madrid, Barcelona, and Valencia had fallen to Franco’s troops, Hitler was making inroads into Eastern Europe, and Picasso’s mother had died in January. Picasso is quoted as saying: “I want to create a cat like the real cats I see crossing the streets… The cat of the streets has bristling fur. It runs like a fiend, and if it looks at you, you think it is going to jump in your face.” Safe to say he caught that in this image! 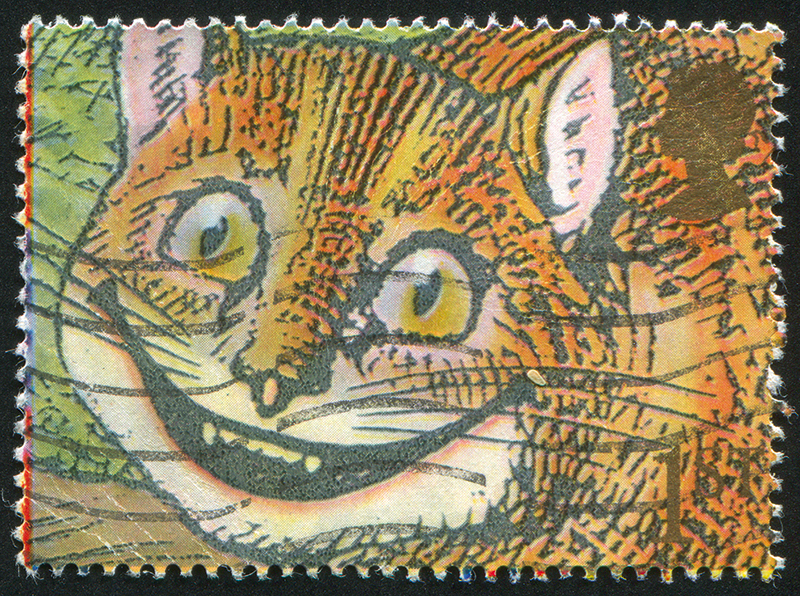 ● Smile!
No collection of feline stamps would be complete without a Cheshire Cat, especially as its creator, author Lewis Carroll, took a keen interest in letter writing and the postal service, even suggesting innovations such as a special cape to protect letters. One of the sets of GB stamps celebrating the Year of the Child in 1979 shows Alice with the Cheshire Cat, while a close-up of that famous grin appears in a 1990 set of themed ‘Smilers’ stamps.

● Hot off the press!
The Royal Mail has recently released eight new special stamps featuring different breeds in brilliant feline poses. You can get the new releases in a fantastic presentation pack. The pack examines the enduring bond between cats and humans, looks at behaviour characteristics, and includes a guide to the most popular cat breeds in the UK.