Getting a glimpse of the smallest wild cat in Africa is a rare phenomenon, but Peter and Andrew give us a glance on their safari tour!

I found myself on safari in the wide, dessicated country of south central South Africa known as the Karoo, otherwise known as ‘the great thirst.’ We were near a small town called Graaf Reinet, South Africa’s fourth oldest magisterial district.

We were exploring a huge reserve region called Samara, east of the town and at the foot of an impressive range of mountains known as the Sneeuberg (snow mountains in English) and that mid-July, they actually had a dusting of snow on their lofty peaks. The endless plains below are forever immortalised in a book by Eve Palmer and are called Camdeboo.

It was here one incredibly frosty evening on a game drive, as we swung a spotlight and sought out the nocturnal denizens of this wild country, that I first laid eyes on Africa’s smallest wild felid, the Black-footed Cat. He was perched on a termite mound and stared at us intently before carefully descending into the grass. I held my breath the entire time; he was my first one. I had heard of these rarely seen little cats and had seen several documentaries focusing on the species but had never had the pleasure until that night on the plains of Camdeboo.

It was a gorgeous little thing with huge eyes, a black flecked and striped coat, and large ears. They are known as wily and aggressive little predators and are referred to in Afrikaans as the  Miershooptier, which translates as ‘Anthill Tiger.’ 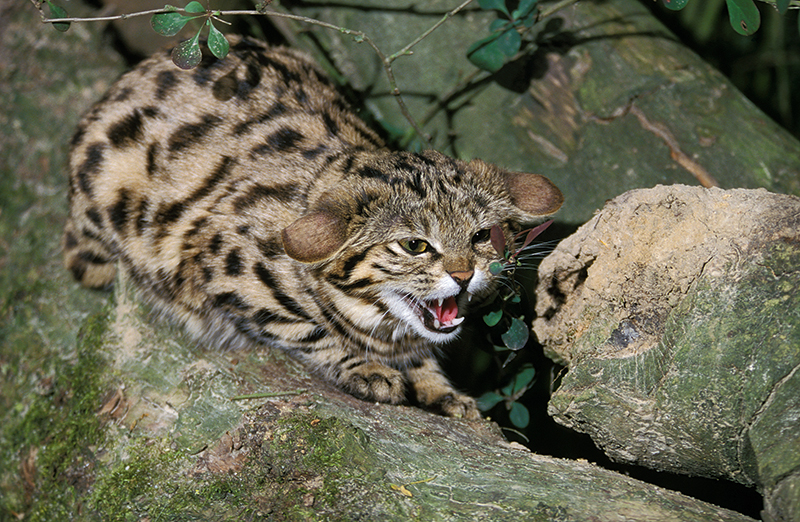 They defend themselves fiercely.

The Black-footed Cat (Felis nigripes), also called the Small-spotted Cat, is the smallest wild cat in Africa, having a head-and-body length of 35 — 52cm. Despite its name, only the soles of its feet are black or dark brown. With its bold, small spots and stripes on the tawny fur, it is well camouflaged, especially on moonlit nights. It bears black streaks running from the corners of the eyes along the cheeks, and its banded tail has a black tip.

The first Black-footed Cat known to science was discovered in the northern Karoo of South Africa and described in 1824. It is endemic to the arid steppes and grassland savannas of Southern Africa. Due to its restricted distribution, it has been listed as a vulnerable species on the IUCN Red List since 2002. The population is suspected to be declining due to poaching of prey species for human consumption.

The Black-footed Cat has been studied using radio telemetry since 1993. It usually rests in burrows during the day and hunts at night. It moves between 5 — 16km on average, in search of small rodents and birds, mostly moving in small circles and zig-zagging among bushes and termite mounds. It has been recorded feeding on 40 different species of vertebrate and kills up to 14 small animals per night. It can catch birds in flight, jumping up to 1.4m high, and also takes on prey much heavier than itself. A female usually gives birth to two kittens during the southern-hemisphere summer, between October and March. They are weaned at the age of two months and become independent after four months of age at the latest.

The Black-footed Cat is part of an evolutionary lineage that is believed to have genetically diverged from the common ancestor of all Felis species around 4.44 to 2.16 million years ago.

The African Wildcat (Felis lybica), that we described earlier in this series, is almost three times as large as the Black-footed Cat, has longer legs, a longer tail and a mostly plain grey fur with less distinct markings.

Read the rest of the feature in the February 2022 issue. Buy the latest digital edition and read instantly on your computer, mobile or tablet device.