"I can’t put into words how much Monty helped Dave" When Dave Willie became terminally ill at just 25, their amazing cat Monty helped him and his partner, Olivia, to cope through their darkest days.

Dave and Olivia met on a night out when they were just 18 and 19 years old, after knowing each other from afar when they worked at Waitrose together.

“There was definitely some Dutch courage involved,” Olivia recalled. “We hadn’t really spoken at work but Dave told me afterwards that he’d had his eye on me at work for a while but had been too shy to do anything!”

Dave was sadly diagnosed with chondrosarcoma, a rare form of bone cancer, in June 2016 and received 18 months of treatment. The couple married in March 2018, a couple of months after Dave received the devastating news that his illness had become incurable.  As Dave’s health deteriorated and the tumour was pressing on his spinal cord paralysing him from the chest down, Olivia felt it was the right time to adopt a feline companion.

“I’ve always loved cats and had been trying to convince Dave to adopt one for ages,” said Olivia.

“Dave had always said that one reason he didn’t want one was because we didn’t have a garden, but as our house at the time wasn’t able to be adapted for his disability, we moved into a flat with a garden.

“I think just days after we moved in I said: ‘There’s no excuse now, we’re going to Cats Protection!’”

The pair visited Cats Protection’s National Cat Adoption Centre in Sussex where they discussed their situation with the team and were introduced to a couple of cats. It was very important to them both that they adopted a cat who wouldn’t be nervous around Dave’s power chair.

“We met Monty and one other cat in the socialising room,” explained Olivia. “The first cat was very sweet but a little nervous — we were told she might need some time to adjust. Monty, however, was totally at ease with everything, jumping up for a cuddle on Dave’s lap straight away.

“Despite his previous reservations about getting a cat, Dave grinned and immediately said: ‘He’s the one.’ We were both totally in love with Monty from that first moment.” 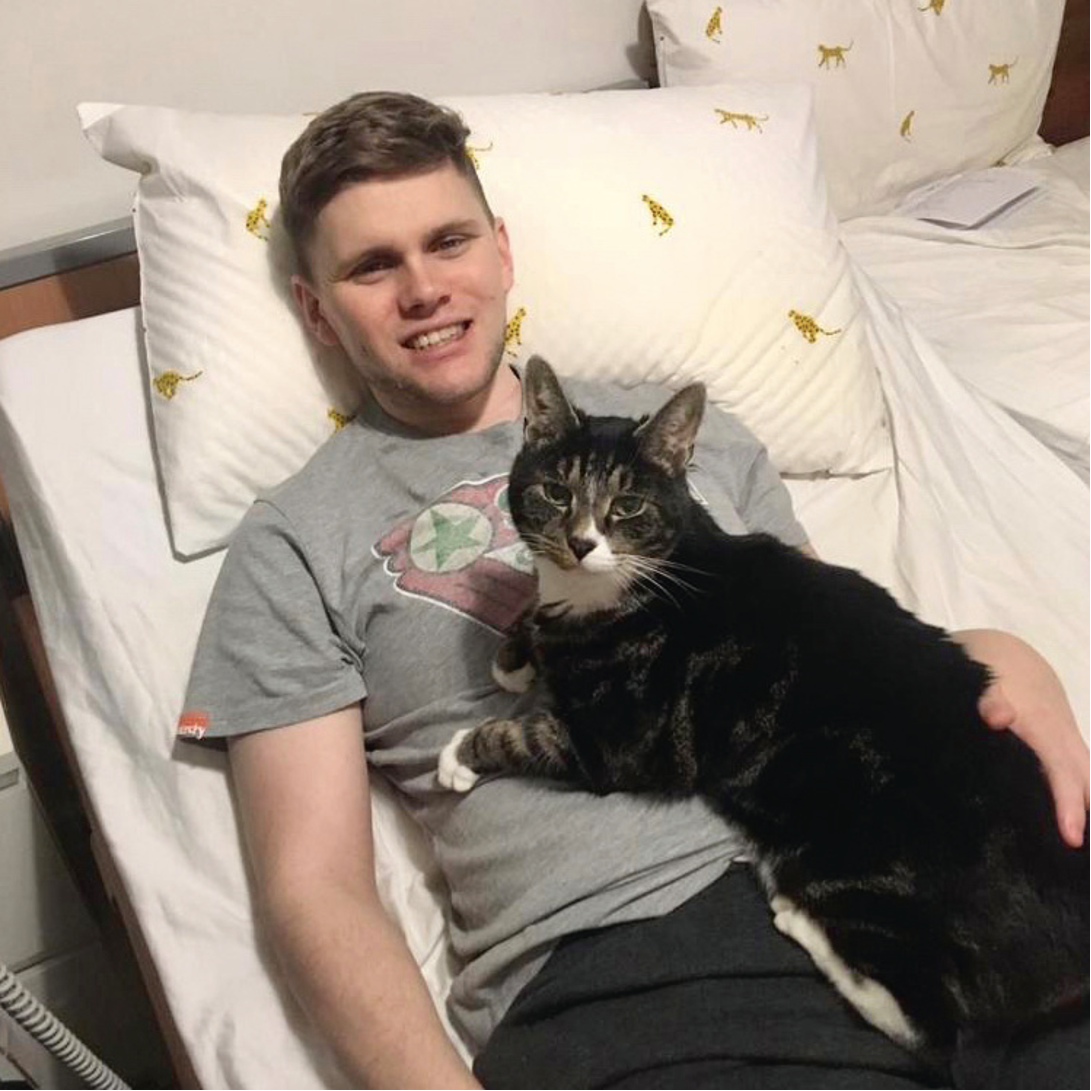 In October 2018, Dave and Olivia took Monty home where their bond with him only strengthened.

“I still can’t believe how lucky we got with Monty; he absolutely lives for cuddles and he was perfect for Dave,” Olivia said. One day, while Olivia was out, she received a text from Dave with a video attached in which Monty was grooming him.

“Monty is the most affectionate cat I have ever known. Dave had been lying in bed one day and Monty laid next to his face on the pillow and started licking Dave’s hair attentively — it was the first of many lovely moments. Monty also made us laugh so much at a time it would have been easy not to laugh at all.

“I remember one evening when we had a pizza takeaway, he tried to swipe a slice out of the box — it had us in stitches!

“I will be forever grateful for the friendship and fun Monty brought to our home during Dave’s final months.”

In March 2019, Dave was admitted to a hospice for end of life care. Monty was due to be taken in to visit Dave a few days later. However, sadly, Dave deteriorated more quickly than expected. When Olivia realised Dave had only hours to live, she was determined to reunite Dave with Monty as promised.

“I rang my mum at 5am and told her Dave didn’t have long,” she said. “She brought Monty straight into the hospice and he curled up on Dave’s chest, calmly licking his paws and simply being there for Dave in the wonderful, tender way he always was.

“That day was beyond heartbreaking but I take comfort in the special memory of our little family trio being together at the end of Dave’s life.”

Since Dave’s death, Monty has continued to offer Olivia much-needed comfort and support.

“In the first weeks after Dave died, I found it too painful being alone,” she said. “I tried to surround myself with people as much as possible, but during the times that couldn’t happen, Monty was always there and gave me a reason to get out of bed. To this day, he brings me so much comfort and affection. If I need a cuddle and a cry, I can scoop him up — he loves it!

“I also talk to him about Dave — his daddy — regularly. I can’t put into words how much Monty helped Dave and how much he has gone on to help me.”

Monty is now 14 years old and is still in fine fettle, even enjoying a walk on a lead with Olivia most days.

“He’s so chilled and has never had any problems with the lead,” she said. “And he’s a good boy who has never wanted to hunt. He’s happy to sleep most of the time and have lots of cuddles.”

Olivia had a change of career after losing Dave and now works in fundraising for disability charity Leonard Cheshire and has been working from home with most of the country during the Covid-19 pandemic. She has been conducting a lot of meetings via Zoom calls, which Monty is more than happy to join her on.

“We’ve also been doing a lot of choir rehearsals online and Monty likes to star in our Zoom videos there too. I think he wants to be the star!” Olivia laughed.

Cats Protection offers a Paws to Listen service which provides both practical and emotional support for those whose cat has passed away or is close to the end of their life.

Catherine Joyce heads up the Paws to Listen service. She said: “Dave and Monty’s experience is such a beautiful, heartbreaking story.

“There is still a stigma around cats being aloof but we hear of more people who say their cat provides them with such comfort.”

Olivia said that having a grief support service is reassuring. “Monty is an older boy and while I have a feeling he’ll be cuddling and swiping pizza for many years yet, there will of course come a time when the inevitable happens, which will be heartbreaking,” Olivia said.

“Not only is he the best cat in the world, but he’s also a tangible connection to the amazing life I shared with Dave. To know that Cats Protection offers Paws to Listen, a grief support service, is very reassuring. I can imagine it’d be a lifeline for someone like me.”