We speak to owner Clare Disano from Brighton, East Sussex, about her sassy sisters, Patsy and Eddie.

Favourite thing to do: Eddie — eating / Patsy — play hunting with her toys or playing with uncooked eggs! 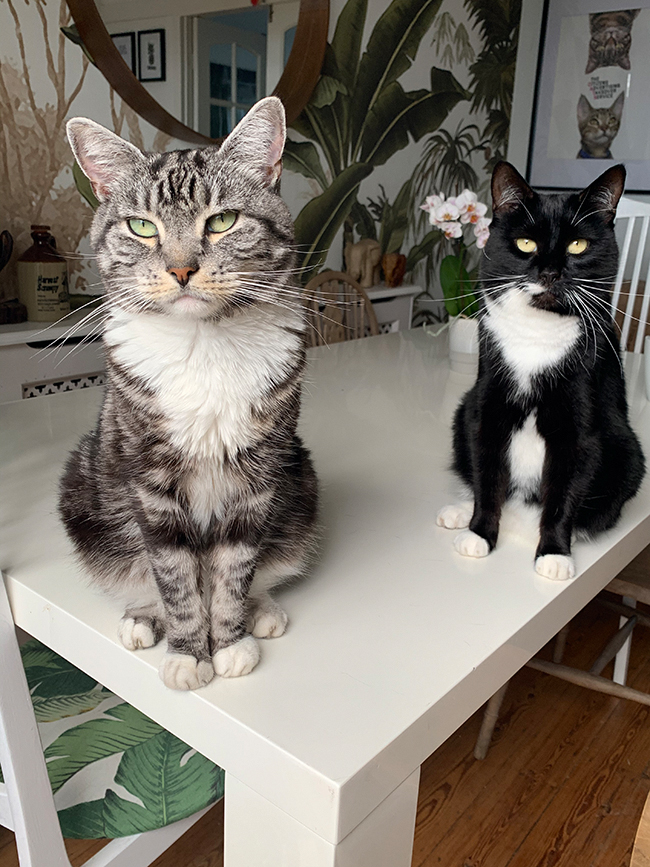 Q: Tell us the story of how you first met Patsy and Eddie…

A: We heard of an adoption service locally called City Cat Shelter, run by a husband and wife with a small team of volunteers. We made an appointment to visit with the intention of getting just one cat, ideally a younger one this time. However, we were introduced to a young pair of seven-month-old sisters who had been taken in along with their other siblings who, by this time, had all been adopted.

As you can imagine, we fell in love with them instantly and decided that actually two cats would be an exciting prospect! They were previously named Wayne and Rizzle at their previous home.

Q: Are they very similar, or do they have different personalities?

A: They are complete opposites to one another, which actually means we have the best of both worlds! Eddie is much lazier, has a ferocious appetite, and is more cuddly. We call her the diva! Patsy has the sweetest personality and is much more adventurous and playful than her sister. She’s also a bit smarter than Eddie, but a much fussier eater. The only similarities are that they have similar white tuxedo markings and long, gorgeous whiskers!

A: I had left my job to go freelance and had a lot of spare time on my hands a few years ago. I was new to Instagram but started an account for them having seen a few other cat accounts. It has grown organically, much more than I could have anticipated. I love the Cats of Instagram community. There is a lot of helpful advice out there if you want it, but mostly it’s all just good fun. I like the idea that we can put a smile on peoples’ faces. We have made so many wonderful friends through our account. I have never met any of them, but I feel like I know them personally — I know so much about them and their cats.

Q: They look like such a cheeky pair! What’s the naughtiest thing they’ve ever done?

A: They certainly are! Eddie is a sucker for a ‘cubby hole’ and we’ve lost her under the decking and the floorboards on a few occasions when we’ve been doing home improvements. She loved it so much under the floorboards that I couldn’t even coax her out with tuna — we just had to wait it out until she got bored! She also snuck into our elderly neighbour’s house through her kitchen window once and I had to go and bring her home.

We recently tiled our fireplace and Patsy suddenly had a fascination with it. It transpired that she wanted to explore the chimney late one night. Fortunately, I was up at the time and saw her go up, but didn’t realise how far up she could go. I called her down (thankfully) and she brought a whole ton of soot down with her! I had to try and wipe her down as much as possible, but she kept wriggling away from me. I was very concerned at first, but we laugh about it now and remember how her pristine white paws turned a not-so-fetching grey. We have since boarded up the chimney!