Is this the end of the 'no pet' policy? It can be difficult to keep cats if you live in rented accommodation  — but hopefully that is about to change. Jill Eckersley investigates.

If you are a cat lover, you probably find it difficult — if not impossible — to imagine your life and your home without a furry friend or two. Sadly though, that is just the reality for many families. They can’t even think about adopting a cat. Or, even worse, they are moving house and have to face the prospect of giving up their cat and handing it over to a rescue charity for rehoming.

That’s because they are going to be living in rented accommodation and their landlord does not allow pets. James Yeates, chief executive of Cats Protection, says that for many would-be cat owners, finding a home to rent is a distant dream.

The rising cost of house purchases, financial uncertainty, and the scarcity of Council Housing and Housing Association properties has meant that more and more families are having to rent privately. One in five UK homes are now privately rented. The number of privately-rented homes doubled between 2002 and 2016, and this figure continues to increase.

The lack of pet-friendly accommodation means that more and more cats are given up for rehoming, or are abandoned to become strays, putting considerable pressure on the resources of rehoming and rescue centres, like Mayhew in West London.

Mayhew’s head of animal welfare, Zoe Edwards, told us: “This situation certainly adds to the cat crisis we have to deal with on a daily basis. We are seeing people forced to abandon their cats when they are suddenly made homeless, or have been moved into temporary housing with a ‘no pets’ policy. Over 90 per cent of the cats that come into Mayhew are strays or abandoned. It costs charities like ours a fortune to tackle these issues. Although they aren’t always the fault of ‘no pets’ rules, they certainly don’t help!

“There are the mental health benefits to owning an animal to consider, with the resultant detrimental effect if owners and cats are forced to separate. That’s why we convinced our local Brent Housing Partnership to adopt a positive and responsible pets policy, allowing pets as long as they are properly cared for, neutered, and microchipped. This is the way forward and we highly recommend other councils follow suit!”

Councils do seem to have been more receptive than private landlords to the idea of allowing tenants to have pets. Cats Protection, which launched its Purr-fect Landlords campaign in 2018, found that more than half of ‘social landlords’ allowed pets, as compared to 7 — 13 per cent of private landlords.

Purr-fect Landlords aims to show those renting out houses and flats why allowing their tenants to have well-behaved pets can actually benefit them — as landlords — as well as benefiting the tenants and the animals themselves. The campaign says that:

Allowing pets means that landlords have a wider pool of tenants to choose from. Tenants with pets feel that their rented house or flat is their ‘real home’ and will be more likely to stay, saving the landlord the time and expense involved in finding new tenants.

So why are landlords reluctant to allow pets in their properties? Some, of course, must have heard horror stories about cat-hoarding or irresponsible tenants not taking care of a property. They might also be afraid of cats causing damage to furniture, toileting inappropriately, or shedding fur everywhere, making the property difficult to re-let to anyone with asthma or allergies. More often, though, a ‘no pets’ clause seems to be standard in tenancy agreements without landlords or their agents really thinking the issue through.

Accidents of all kinds can happen in the best-regulated households, whether they have pets or not! Cats Protection points out that properly cared-for cats cause very little damage. Fleas, mites, and other parasites can — indeed should — be treated by responsible owners.

An amount can be added to the rent to cover any possible damage, or to pay for thorough cleaning at the end of the tenancy. Any contract between landlord and tenant could specify the number of cats that can be kept, depending on the size of the property, and also that any pets should be neutered, microchipped, and vaccinated. Cats that are used to living indoors, or have medical conditions such as FIV which mean they shouldn’t come into contact with other cats, will be perfectly suitable for homes with no outside space.

Many of the organisations representing landlords’ interests recommend that landlords should consider requests for tenants to have pets on a case-by-case basis, depending on the nature of the property and the type of pet, and that ‘pet clauses’ should be included in tenancy agreements. Prospective tenants who already have a cat might consider producing a reference for their pet, as well as themselves, just to show that cats can be model tenants too.

There’s good news for renters with cats though. At the beginning of January, the Housing Secretary, Robert Jenrick, called on landlords to make it easier for responsible tenants to have well-behaved and properly cared-for pets.

“More young people and families than ever before are renting and should be able to enjoy the happiness that a pet can bring into their lives,” he said. “It’s a shame that thousands of animal-loving tenants and their children can’t experience this because they rent their homes instead of owning them. So, I’m overhauling our model tenancy agreement to encourage more landlords to open their doors to responsible pet owners.”

An update to this from the Department of Housing, Communities and Local Government in June said that the revised model tenancy agreement should be published this year, removing the restrictions on well-behaved pets.

Cats Protection, like other animal welfare charities, agrees that sensibly-drafted rental agreements, including clauses specifying the number of cats that can be kept and that they should be neutered, microchipped, and vaccinated, will not only benefit landlords and tenants…but cats as well!

Never try to sneak a pet into rented housing — be upfront and ask instead.

It is not only renters who may be affected by ‘no pets’ rules. Flats are regularly sold leasehold and prospective buyers may find there’s a clause in their lease which says ‘no pets allowed.’ Obviously, you need to check this before you buy. It is sometimes possible to make a change with the freeholder’s consent, using a ‘Deed of Variation’ which will need to be registered at the Land Registry. If you are buying a flat with a share of the freehold you and the other leaseholders may also be able to change the lease — ask your solicitor’s advice. 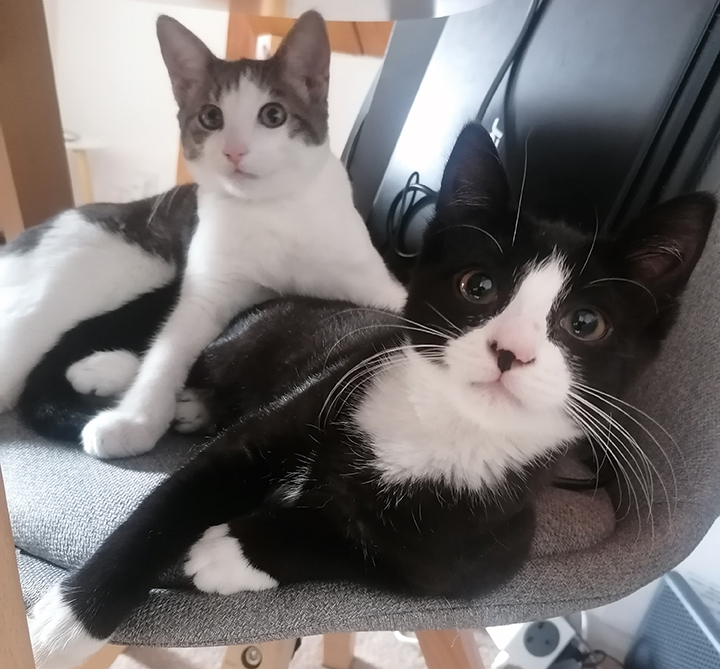 “Everywhere I looked for a house to rent, I was told ‘no pets!’” says Fabienne Beavers from Plymouth, who moved house last year with her two sons, Zayne and Mylo. “We had to rehome our dog, and were lucky to find a wonderful home for him in the country. A local parrot rescue took our parrot, and sadly our old cat had died the year before.

“Letting agencies all told me few landlords would allow pets but the boys and I all felt a house wasn’t a home without them. It seemed such a shame that people renting their homes couldn’t have a cat to keep them company, and the boys kept asking me why we couldn’t.

“We eventually found a house and then I waited six months before contacting the letting agency and asking about having a cat. I sent them photos of the house and the garden so that they could see we were looking after the place and it was clean and tidy. I’ve always paid the rent so they know we are good tenants! I said I was quite happy to pay for any damage a cat might cause, and even for professional cleaning when we eventually move out. And, of course, that I would make sure the cat was neutered, microchipped, and treated for fleas and worms and everything — in other words, it would be well looked after. The landlady agreed, though they are charging me a bit more rent.

“I then heard about a local family where there was a litter of kittens. I went to see them and there were two left from the litter, one black-and-white and the other grey-and-white. I collected them and kept them in the kitchen until the boys came home. I told Zayne and Mylo to sit on the sofa with their eyes closed as I had a surprise for them, then brought the kittens in!

“The boys were thrilled, absolutely overwhelmed, and seem so much happier now they have animals in the house again.

“I would advise anyone who wants a pet to speak to their landlord or the letting agency — don’t try to sneak a cat in. I’m so pleased to hear the Government are making it easier for families in rented homes to have pets like anyone else!”