Meet the hero cats who changed their owner’s lives A hero doesn’t always have to be brave, courageous, or undertake daring acts. Sometimes a hero can be a quiet, calm presence. These two cats are undoubtedly heroes because of the immeasurable care they brought to their families in extremely difficult times

When the world was very bleak and it looked like there was no way forward, a scruffy black cat found a way to break through the depression to save her owner.

Rachel Golding had had a very tough time which had brought her to the point of thinking about taking her own life. After her cousin had breast cancer, she had been diagnosed as positive with the BRCA gene, which meant she had an 80 per cent chance of developing cancer. She underwent dramatic surgery to remove her ovaries. But the operation had left her hormones unbalanced and Rachel was struggling to get the drug treatment needed to correct the levels.

She was depressed and felt alone. What’s more, Rachel, 48, had a broken heart. In 2017, the physiotherapist had adopted an abandoned cat found wandering in a friend’s garden. But Yuki, a stunning fluffy British blue, did not cope well with life in Rachel’s home in St Albans, Hertfordshire.

Rachel said: “Although beautiful, Yuki had a lot of issues — she was terrified of everything and everyone except me. As soon as my son would come home from school, she would hide under my bed and not come out until he was in bed.

“She then started weeing around the house because she was so unhappy. We spent hundreds of pounds on vet bills, behaviourists, special anti-depressant cat food — which as a typical cat she refused to eat, obviously — and moving our furniture around, but it was increasingly obvious that our home was not right for her, and it was unfair for her to stay in a home where she felt scared and unsafe.”

After more than a year of trying to make it work, Rachel, with a heavy heart and tears streaming down her face, took Yuki to Oxfordshire Animal Sanctuary, hoping that this would be a way of giving Yuki the life she deserved.

“I cried the whole way there and back, and then every day for three months. It was like a bereavement and still hurts my heart."

With her unsettled hormones and her feeling of overwhelming sadness, Rachel struggled to cope with her everyday life.

“It took ages to get the hormone replacement therapy (HRT) right and Yuki’s departure was in the middle of that nightmare, and for months, I was mentally in a very bad place.”​

One day, things got so bad that when she was in the bath, it crossed her mind that she could go under the water and never come back up. Luckily, at that moment her husband came in and asked her: “If we got another cat would that help you?”

Immediately, Rachel felt that there was some hope left for herself. She went online and as she scrolled through the cats needing a home, her eyes fell on an older black cat with a torn ear, and she felt a connection. That very same day, they drove to the National Animal Welfare Trust in Watford to meet her. Vet checks and home checks followed and then three weeks later, on Valentine’s Day, her husband collected her.

“Instead of bringing flowers home, he brought this special cat home,” says Rachel. “She had been called Pretty but we renamed her Rosie to mark the date.” 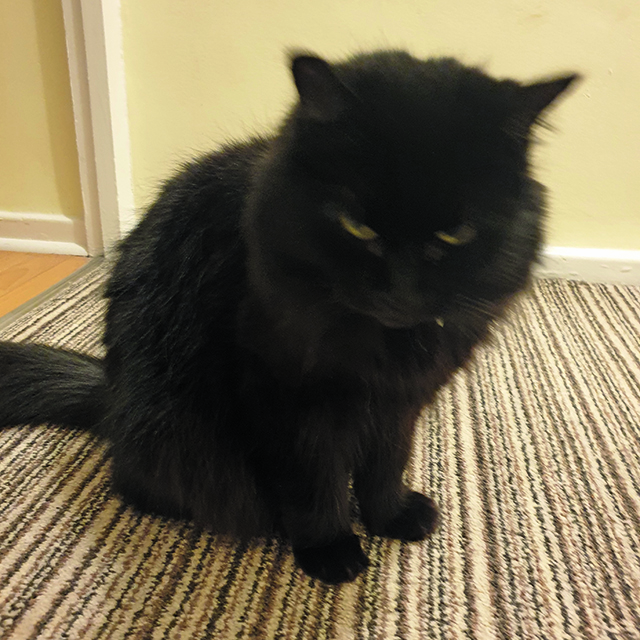 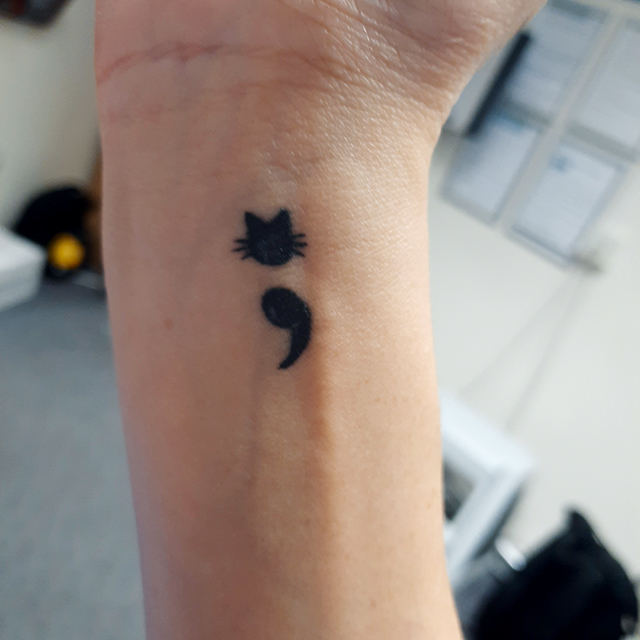 Aged about eight, Rosie, jet black with yellow eyes and a slit in her right ear, soon settled in — loving the comfort of a home to call her own where she can curl up and sleep the day away, especially if she can snuggle into her favourite person, Rachel’s son.

In July, Rachel had a fitting tribute to show how grateful she was to Rosie: a tattoo. The inking is the traditional semicolon design used to raise awareness of mental health issues, but adapted to look like a little black cat.

“We might have rescued her from her cage at the rehoming centre,” said Rachel, “but she rescued me from my mental cage. She filled a cat-shaped hole in my life, and seeing her sitting waiting on the stairs when I come home has helped more than antidepressants! She really is a cat hero for all the joy and love she has brought to my family and for helping me through a time when life was very difficult indeed.”

For one boy, his gorgeous Birman cat turned out to not only be a faithful friend but helped him to cope with severe anxiety.​ When Lorcan Dillon started nursery at three, his anxiety was so bad he was not able to speak to his teachers or classmates — a condition known as selective mutism.

“He literally couldn’t speak,” said his mum Jayne Dillon, of Davyhulme in Greater Manchester. “He would chat away at home, but as soon as he got to the nursery gate his anxiety disorder meant he went totally silent.” 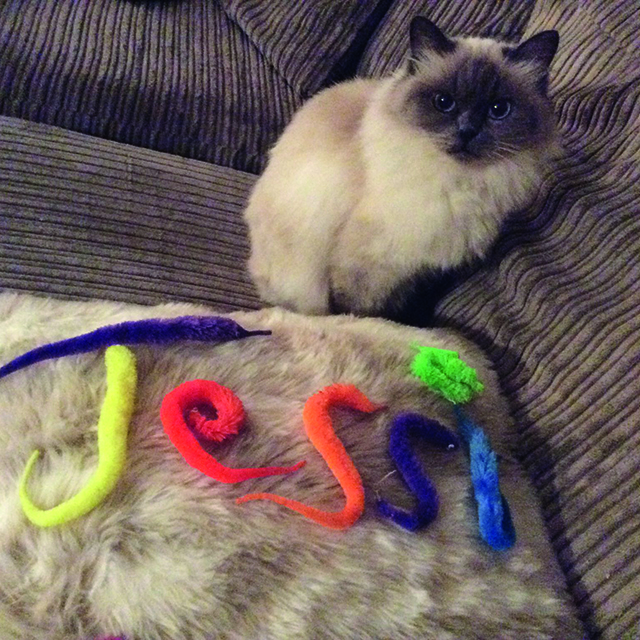 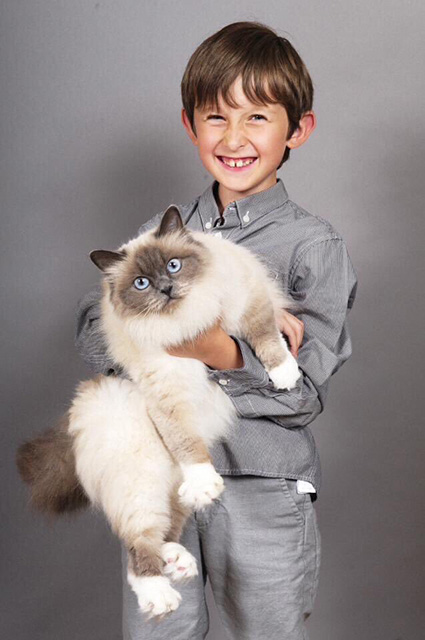 The family’s cat died when Lorcan was six in 2010 and Jayne chose a kitten to join the family — a blue point Birman they called Jessi-cat.

“Very gradually, we noticed a bond building up between Lorcan and the kitten,” says Jayne. “Wherever he was, Jessi-cat would be there too.

“They would be playing with figures or building things together and Lorcan never got upset if she knocked them over — and she was very placid with him. Jessi-cat was a constant companion to Lorcan. They became inseparable.”

Lorcan, like one of his older brothers, has autism which meant he was not a fan of displays of affection such as hugging or kissing, and had never told anyone, not even his mum or dad, that he loved them.

Jayne, 52, said: “One day, Lorcan was playing and the cat was with him as usual and I heard him say, ‘I love you Jessi-cat.’ It was unbelievable — it was as if she had opened his heart to emotions.” 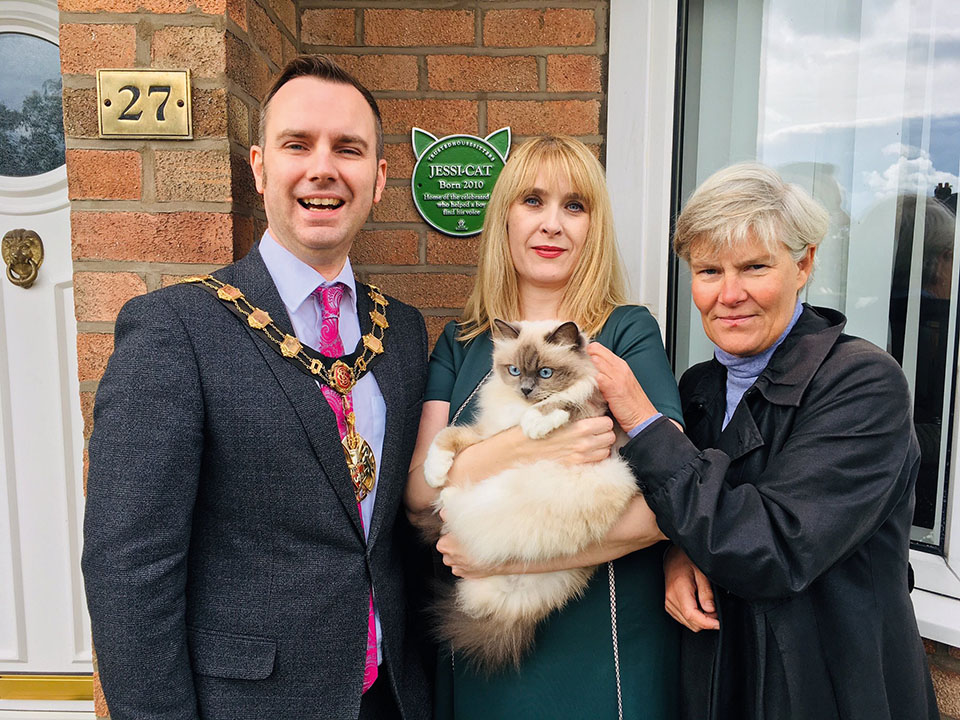 With the green plaque.

Their relationship went from strength to strength, with their relationship being so inspiring that Jessi-cat was named Best Friend and National Cat of the Year in the Cats Protection Awards. Jayne then went on to write a best-selling book, ‘Jessi-cat: The cat that unlocked a boy’s heart’, and Jessi-cat was the first cat in the UK to be honoured with a green commemorative plaque, celebrating exceptional pets. Sadly, Jessi-cat died very suddenly last year.

Jayne added: “Jessi-cat was a hero to us. We miss her terribly. She helped build up Lorcan’s confidence and calm down his anxiety. She changed his life in an incredible way.”