“My cat gave blood — and saved another cat’s life”

Humans can regularly give blood and save many lives in the process, but did you know that cats can also be life-saving donors?

One cat and his owner who know the importance of feline blood donors are Susan Smith and her cat Smokey, as the kitten became very ill after eating some sour cream and onion crisps.

Smokey first came to live with Susan in May as a 10-week-old kitten and made himself at home straight away. Susan noticed that one morning, Smokey was very clingy and lethargic, and didn’t want to play at all, which was very unlike him.

When he didn’t improve the next day, she phoned the local vet and Smokey was admitted for blood tests. It was found that he had developed Heinz body anaemia, possibly caused by ingesting toxins found in crisps or paracetamol.

Smokey was then sent to the Royal Veterinary College (RVC), where it was discovered that his red cell count was only 10 per cent, and he was in urgent need of a blood transfusion.

Thankfully for Smokey, a feline blood donor was already ready and waiting to offer him life-saving blood.

Theo, a Maine Coon, lives with Kat Pearson and her family, and his three feline housemates, in Potters Bar; he is something of a gentle giant.

“We’ve got four cats and he’s by far the most chilled of all of them,” Kat said. “He’s a bit of a giant, but he’s so placid and even from when he was tiny, the children would pick him up and carry him around and he couldn’t care less!”

Kat first had the idea of signing the ever-chilled Theo up to be a blood donor after reading about the outbreak of feline pancytopenia earlier this year. She said: “I contacted the RVC to ask if he could give it a try. There are a lot of criteria that need to be met for a cat to give blood, but luckily Theo met all of them so he was called in for blood tests and a heart scan to make sure he was as fit and healthy as possible.”

After passing the tests with flying colours, just five days later Theo was booked in to give blood and Kat dropped him off at the clinic in the morning and picked him up just four hours later. “I came to pick him up and the nurses told me he was purring throughout because he was so happy he was getting lots of attention!” she said.

After Smokey received Theo’s blood, his red cell count went up to 14 per cent, and then 19 per cent a few days later, and he was able to go home after 12 days in the care of the RVC.

He was booked in for further blood tests a couple of weeks later to make sure he was recovering well, but it was found that his red cell count had gone back down to 14 again, so he was given another blood test to see if he still had the toxins in his system, which thankfully came back clear.

Poor Smokey didn’t enjoy having blood tests at all, as Susan said: “He had to be given gavapentin to calm him down as he was so anxious, and we were worried that after 12 days in the vet’s he’d have forgotten us, but thankfully he hadn’t.”

When the results hadn’t improved a few days later, the RVC recommended a bone marrow sample be taken if he hadn’t improved in the next couple of weeks, but thankfully his red cell count went back up to 19 per cent and he was back to his normal, lively self. 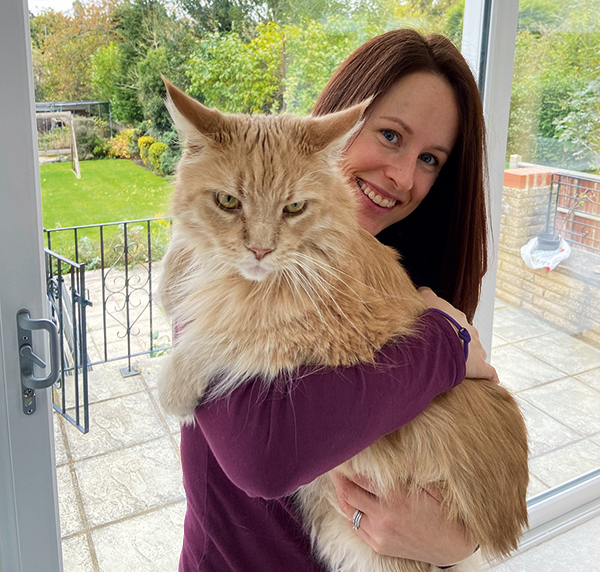 Theo with his owner Kat Pearson.

The family has been left with vet bills of nearly £5,000 and have set up a GoFundMe page to ask for help with his vet fees. You can make  a donation at https://gofund.me/3501444e

Susan said: “We can’t thank the RVC enough for all they did for Smokey, and we’re so grateful to Theo’s owners for allowing him to give blood — there’s no doubt Smokey wouldn’t be here without him.”

Theo is now on the register to give blood regularly, which is every three months and he is also down as a registered emergency donor. Kat lives five minutes away from the clinic, so if a cat comes in and needs blood urgently, she can take Theo straight in. Kat said: “We will definitely take him regularly, as long as he’s happy with it.

“It’s really nice to hear that he has already saved a life, especially as the cat was nearly poisoned by sour cream and onion crisps — I didn’t even know that could happen. I bet not many other people did either.” 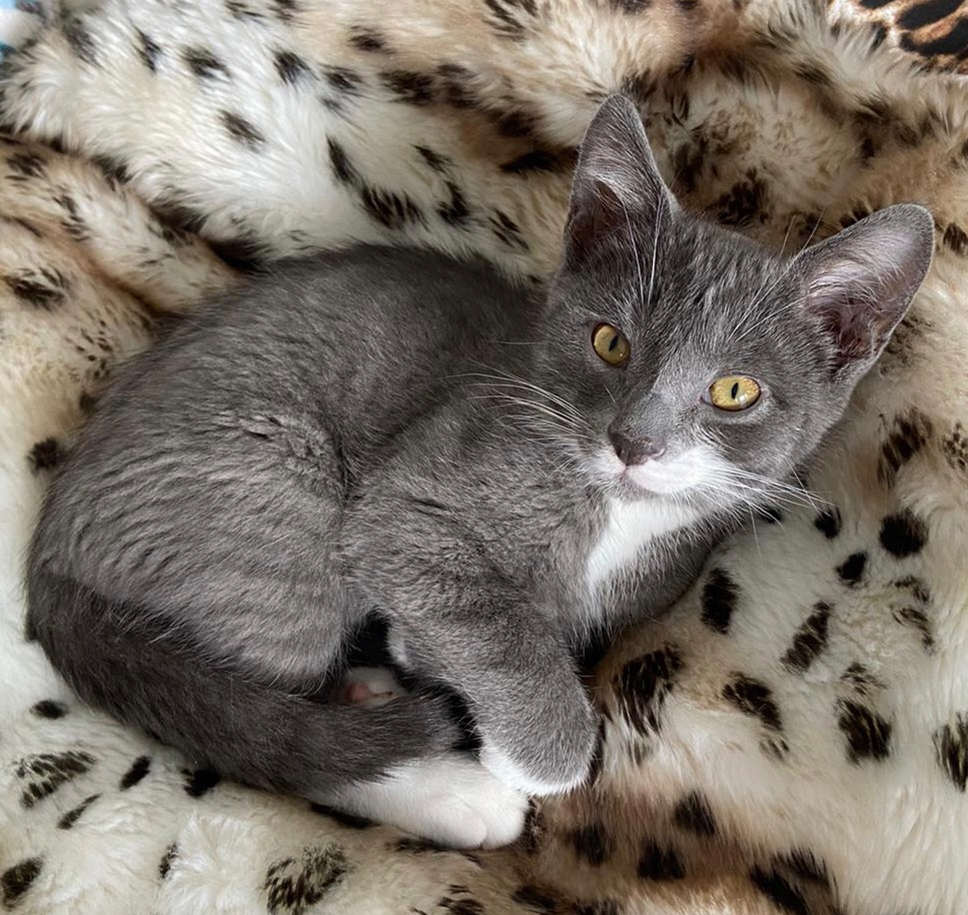 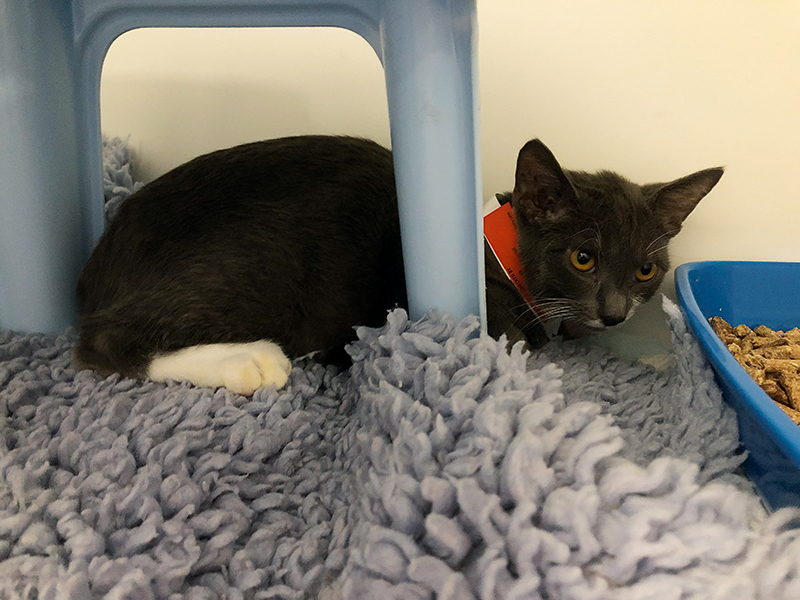 We spoke to Charlotte Russo, head of transfusion medicine RVN at the Royal Veterinary College, about the process of cats giving blood, and which cats make suitable donors.

There are a number of criteria that cats need to meet in order to be considered. They must be between one and 10 years old; up to date with their vaccinations, flea, and worm treatments; and have no illnesses or medical conditions.
The cat should weigh more than 4kg, with 5kg being the ideal.

Charlotte said: “The most important criteria is that the cat has the right temperament; we need cats to be naturally placid and chilled out and not bothered by a vet setting.

“Our cats give blood in a designated room, which is very quiet and non-clinical to make it calm and relaxing. We play classical music for them and make sure they’re as happy as possible.”

The donation process takes roughly four hours. The donating cat is given time to settle into the room and given plenty of treats. A numbing cream is applied so that he won’t feel the needle, and he is given plenty of fuss while the donation is taken, which is around 15 minutes. Afterwards, the cat is given some fluid therapy and some food, and monitored to make sure there are no after effects.

“We consider the cats as an extension of our own family and we want to make sure they are in the best of health, and we look out for them,” said Charlotte. “The cat is doing something extraordinary, and we really appreciate the owner agreeing to do this in their own time.”

More Info: To find out more about your cat becoming a feline blood donor, call 01707 666511 or email [email protected]