Cat owners are the most concerned about the cost of living and how it will impact the care they’re able to provide to their pets, according to a ground-breaking new report by the RSPCA and Scottish SPCA.

Latest news from the RSPCA.

The ground-breaking inaugural report* - the Animal Kindness Index - is based on a YouGov survey of more than 4,000 UK adults**, which looks at the nation’s attitude towards animals.

The report found that while animal welfare is one of the top most important social issues people were asked about - with over two-thirds (69%) of the public describing themselves as ‘animal-lovers’ and 75% of people saying they’d carried out an act of kindness for animals in the past, the rising cost of living is threatening the care of our pets.

The report revealed that 72% of pet owners think the cost of living will have a negative impact on animals in the UK. The study also showed that cat owners seem to be most impacted and concerned about cost of living pressures.

Emma Slawinski, director of advocacy and policy at the RSPCA, said: “It’s great that our research has confirmed we are a nation of animal lovers, however we cannot ignore the stark suggestion that the cost of living crisis is the biggest single threat to pets in the UK today.

“We are on the brink of an animal welfare crisis due to the rise in pet ownership during the pandemic, coupled with the cost of living pressures biting - especially those on lower incomes. It’s absolutely heartbreaking.

The RSPCA is seeing a year-on-year rise in some pets coming into its care; and in the first five months of 2022, the charity took in 14% more cats than the same period in 2021.

RSPCA cat welfare expert Samantha Watson added: “With an estimated 12 million cats*** being kept as pets in the UK, it’s incredibly concerning to hear that so many cat owners are concerned about being able to care for their pets properly due to the rising cost of paying for things such as food and vet bills.

“We would urge anybody who is struggling to pay for their cat to reach out to friends or family for help, or to speak to their vet about possible options. There are also lots of organisations and charities, such as local food banks and rescue centres, who will help if they can.” 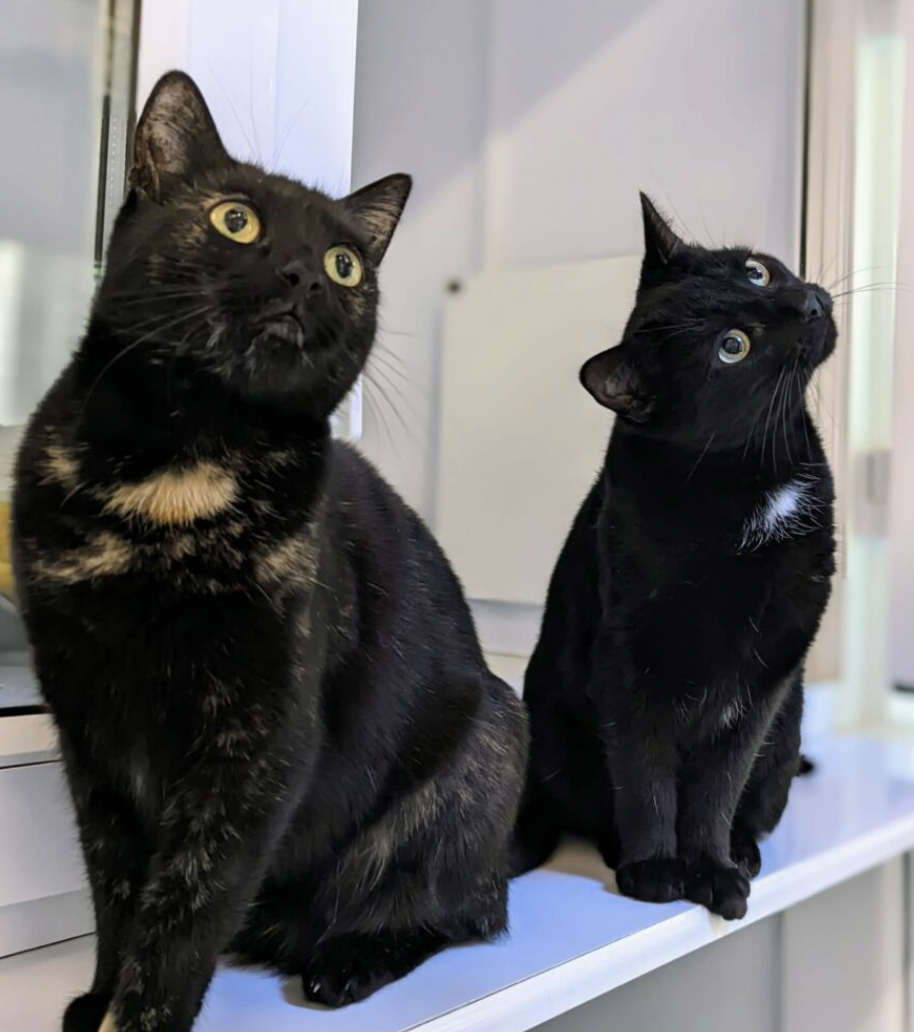 RSPCA Macclesfield, South East Cheshire & Buxton branch, Cheshire, took in three-year-old sisters Rosie and Daisy in February when their owner could sadly no longer afford their care following a change in personal circumstances. They are sweet, affectionate and friendly cats who can be a little nervous at first and would suit a family home with older children. 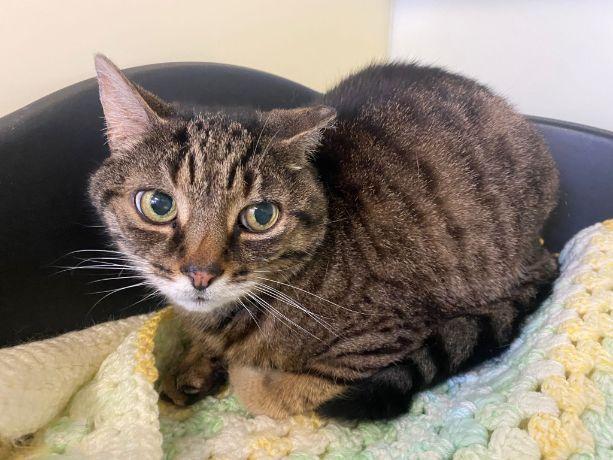 Stripes the cat came into the care of the Scottish SPCA’s Lanarkshire centre after his owner sadly became unwell and could no longer provide the care he needed. At first, Stripes found cattery life very stressful and would hiss and swipe at staff. However, once he finally settled and got to know the team, he showed his true personality. He is very affectionate and loves to play! 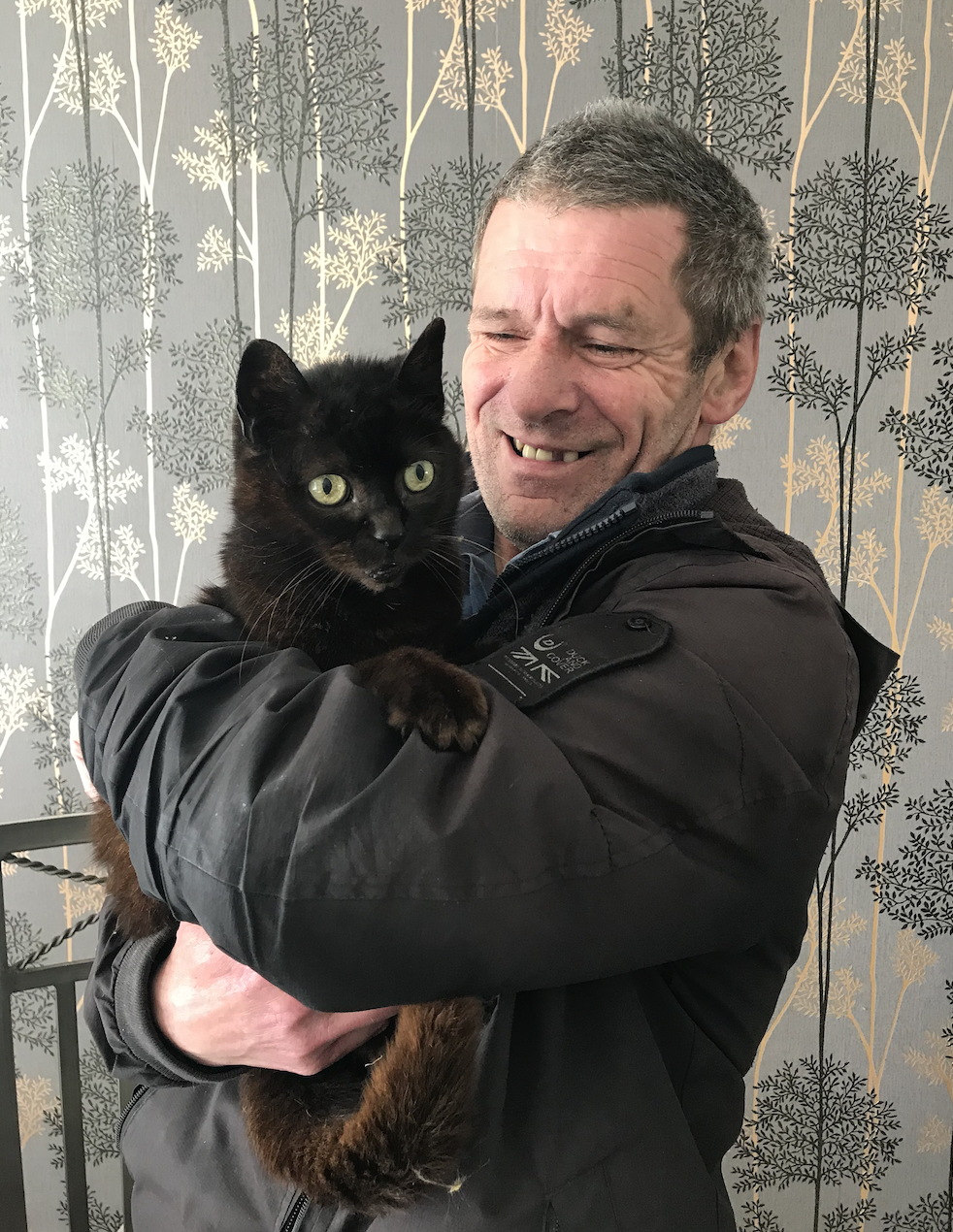 The RSPCA has expanded its food bank scheme in England to help more pet owners who are struggling. Many centres and branches have teamed up with their local food banks to help support families who may be struggling.

Paul Cardwell (pictured above), 55, from Preston in Lancashire, has had eight-year-old cat Lucky since she was a kitten. He started using his local food bank in 2020 and also helps as a volunteer with deliveries.

He said: “The food bank makes a huge difference to my life as my food and pet food keeps going up in cost. Getting food from the food bank means we have enough for both of us and I don't have to choose between cat food and my food, although I would choose to feed Lucky over myself any day.

“The cost of living has made life much harder and losing my dad made life a struggle. Lucky helps me through hard times.

“I have never considered giving Lucky up as she is my life, my family; she is my sole source of company. It doesn't matter what happens in life, we will always be together.

“Lucky means everything to me; she is a great pet, family member and my companion. She cuddles up on my bed and always cheers me up when I have bad days. I could never be without her.”

The RSPCA and the Scottish SPCA’s emergency cruelty lines are under growing pressure as calls have returned to pre-pandemic levels and as we enter the busy summer season. Sadly, we are not able to help with cost of living problems.

There are lots of ways to show kindness to animals this summer:

*This is based on findings from the YouGov survey, information from RSPCA frontline officers, search data, and data from our own sources and other charities.

**The total sample was 4,102 UK adults and the results have been weighted to be representative of the UK population aged 18+, the survey was carried out  by YouGov13 April - 25 April.