A rescue cat has defied the odds and bounced back to health — despite his owners fearing the worst — after the removal of a large brain tumour.

Thirteen-year-old Codo has been a faithful companion to Simon Bowes and his wife, Tess, since they rehomed him from Cats Protection eight years ago.

Simon, from Newbury, Berkshire, who is in the RAF, says: “We are not sure how he ended up in rescue; we were surprised to see him there. He is a gorgeous British Blue, although he had a bad hip and jaw, but he was beautiful, very relaxed and calm, but also talkative, so he came home with us.

“Codo is a big boy, and a very unusual and intelligent cat. He has been so patient, because he has had to move around various air bases with us over the years.”

In autumn 2019, Simon started noticing that Codo didn’t seem quite himself. “It started when he seemed to struggle getting on and off my lap,” says Simon. “However, I did think this could be due to his bad hip.

“Then, one day, I noticed him sitting outside beside his cat flap in the pouring rain, meowing to get in. This was odd as the cat flap was open. Codo was soaking wet and it was almost as if he had forgotten how to use the cat flap.

“Tess and I knew at this point that he wasn’t quite right and we were monitoring him closely. Our once very playful cat, who loved chasing bouncy balls around the kitchen, suddenly didn’t seem interested in playing at all, and had taken to curling up under a chair in our spare bedroom, which he never did.”

Then, one morning, Codo took a dramatic turn for the worse. “It was almost like he was sleep walking,” explains Simon. “He simply wasn’t there. He was not responsive at all and he kept bumping into walls — his vision had completely gone.

“We took him straight to the vet’s, where it was our friend, Aaron, on duty. He told us Codo was almost certainly suffering from a brain tumour and that he would need an MRI immediately.” Codo stayed at the vet’s overnight where he received steroids, and seemed much better the next morning. However, Codo’s prognosis was bleak. “Aaron told us that, with the symptoms displaying at this degree, Codo likely had less than a month to live if we didn’t act immediately,” says Simon. 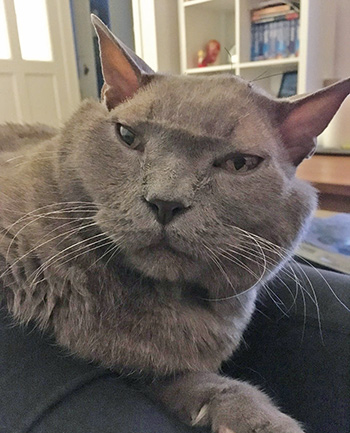 Codo was booked in to Davies Veterinary Specialists a couple of days later. At Davies, Codo underwent a neurological examination, which revealed all might not be well. Subsequently, an MRI scan was performed revealing a large growth on the brain, causing dramatic compression on Codo’s occipital and temporal lobes.

Despite Codo’s age and the surgery carrying significant risks, Simon and Tess opted to go ahead.

“We couldn’t not do it,” says Simon. “Despite the treatment going well beyond what our insurance would pay out, we had to do it. With Tess and I both having jobs that mean one of us is often working away [Tess is an engineer working offshore in Norway], Codo is our constant.

“As a society, we are crazy about our animals, aren’t we — and we are incredibly bonded to Codo.

“Prior to Codo’s surgery, Tess and I both said our goodbyes. I had seen the tumour and I didn’t expect him to come out the other side. Tess was going to be working away when he had his surgery and had also said her goodbyes to him. We had a lovely day with him in the sunshine, where we took what we believed would be the last photos of him.”

After a gruelling six-hour surgery to remove the tumour, Codo went to recovery.

“It is amazing he came through it,” says Simon. “What the team at Davies achieved, and their skills sets are incredible. The tumour was fused to healthy brain matter, so removing it without causing damage was no mean feat.

“Of course, the next worry was would he survive post op, then the question of whether he would still be our Codo.

“The early days post surgery were a worry. He didn’t look as swollen as I expected, but he had a bald head which looked at odds with the rest of his thick coat. His first night home he weed all over my lap. I remember taking him out to toilet in the dark, wearing a hoody and head torch. The police even stopped one night to see what I was up to.”

Miraculously, Codo has recovered with no complications and his prognosis is much brighter.

“His hair has almost completely grown back now and he is back to normal, which we weren’t expecting at all,” says Simon.

“Davies can’t guarantee they got all of the tumour, but the outlook is positive. The weird thing is, before all this happened, I had commissioned a painting of Codo in military wear for Tess’s birthday. There came a point when I thought this would be his last ever picture. We are so thankful it wasn’t.”

A WORD FROM THE SPECIALISTS 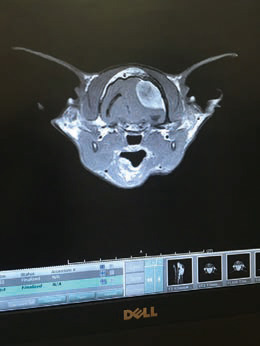 Pete Smith, head of neurology and diagnostic imaging at Davies, who carried out the surgery on Codo, says: “Although it’s impossible to be certain without taking a sample, this [Codo’s growth] had the typical appearance of a meningioma, a tumour of the membranes that surround the brain.

“Meningiomas in cats are typically slow-growing, and, if they can be successfully removed, the outlook for the affected patient is very good.

He continues: “The tumour was very closely attached to the normal brain, and to a shelf of bone within the skull running between the brain and cerebellum — the tentorium. However, by using a thulium laser directed along an optic fibre to aid dissection, it was possible to break down the connections between the normal and abnormal tissue, allowing the tumour to be removed en bloc [all together].”Codo received expert anaesthetic care from Davies anaesthetist Heide Klöppel throughout his operation, and recovered from the procedure without any significant complications.

The tumour was sent for histopathological analysis and was confirmed as a meningioma, with a very low rate of cell division.