The electrical life of cats Inspired by the recent Louis Wain film, Peter reminisces about a selection of his most memorable feline friends.

I was delighted to get back on board a plane at the beginning of April and head down to my other home; the continent of Africa, and get out and about again with my colleague Andrew Rae of Rae Safaris. We have a very full safari season ahead, catching up on all those postponed trips from the last two years, including our Big Cats focus trip where we hope to view as many of the cats, large and small, that we wrote about in our recent series in Your Cat.

Sure enough, as I scrolled through the many film choices to watch on the plane, I hit upon a film from last year that I had very much been meaning to watch: ‘The Electrical Life of Louis Wain’, and what a wonderful film it turned out to be with Benedict Cumberbatch playing a superbly sensitive and
multi-faceted role, perhaps one of his best ever, as the much beleaguered and very unique Louis.

Of course, Louis Wain is very well known to most feline enthusiasts as an amazing illustrator of cats, and perhaps as a past chairman of the National Cat Club, but also to psychologists and psychiatrists as a famous and much studied example of the progression of neurosis.

Everyone should watch this sensitive film and refer to the several books about him, or simply google Louis Wain and have fun for an hour or two exploring. As I watched the film, I was struck by one passage in particular:

I think that you are the first person ever to see that they (cats) are in fact ridiculous. They're silly and cuddly and lonely, frightened and brave. Like us."

I love this line, not just in the context of the film, but because of its inherent truth. Cats are indeed all of those things, as are we all at various points in our lives. It prompted me to think of a best example of a cat I have met, observed, lived with, admired, or laughed at or with throughout my rather less than electrical, but nonetheless very lucky, life shared with cats. So here, briefly, are the cats that I came to recall, and with such fondness and empathy. Perhaps that is what cats actually do best for us all. They help us relate better to the world, to feel life across a broad emotional range and become energised as a result. Perhaps it was this connection that Louis Wain experienced in such vivid and, to him, electrical colour.

I had been taming a good old London black and white feral kitten for just a couple of weeks when we moved to the rolling countryside of Wiltshire. So, instead of being passed on to a new home, we decided to adopt him permanently and named him Bullet, for the sheer speed at which he continued to run away from us, unless it was dinner time!

Soon he became increasingly tame and affectionate and revelled in his change of circumstances from scratching a living in the concrete grey city to the glorious hunting grounds of Wiltshire fields. He became a masterful top of the food chain predator but, like so many cats, would often bring his prey home through the cat flap to eat in more comfortable surroundings.

One night, we were woken at 3am by a constant banging and clattering of the cat flap door. And there he was, bum on the inside, four paws balanced on the flap threshold, his entire mind, teeth, and body focussed, and repeatedly trying to haul his greatest trophy ever — a large dead male pheasant — sideways through the flap from the outdoors. Utterly ridiculous! 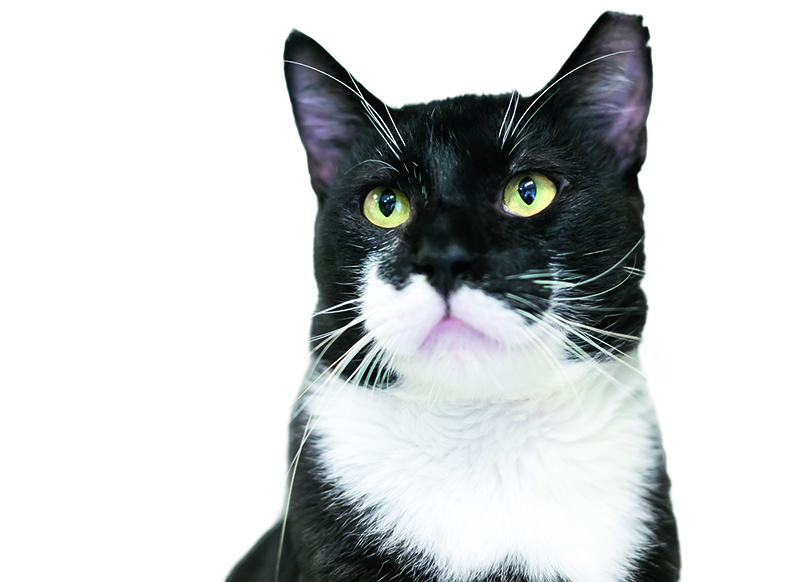 Neutered cats will often have their ears tipped.

I was busy all hours conducting a trap, neuter, release programme on a series of beach hotels in Tunisia back in the 1980s, and as ever, had quickly caught the first 90 per cent of a population of about 21 cats at one rather posh place and duly packed them off to the conveyor belt sterilisation clinic a few miles away.

The traps were of the automatic variety and so I would patrol them every couple of hours through the night and transfer the cats to separate ‘squeeze-back’ cages in the truck ready for transport and then reset the trap again.

Over the course of five days and four nights, one tom, one of the very first to be neutered and returned at the start of the programme, clearly had learned nothing from the experience and re-entered the trap over and over again! His ear was tipped to show that he had already been castrated and therefore spared any subsequent pointless time-wasting trips to the vet’s.

One night, I caught him four times and released him four times and formed the view that this was indeed the silliest cat I had ever encountered. But finally, when I noticed how plump and glossy he was becoming, the penny dropped. That penny being that I was by far the silliest person he had ever encountered. Freshly baited trap equalled yet another free dinner, and having eaten the lot, all he had to do was have a snooze while he waited to be released. And then wait nearby in the bushes while the trap was re-baited and go in again to enjoy a nice dessert.

In the end, I had to keep him caged while I mopped up the final few cats of his colony but I left him a final tasty meal when I released him for the last time for showing me that a cat could always be expected to outwit me given half a chance! 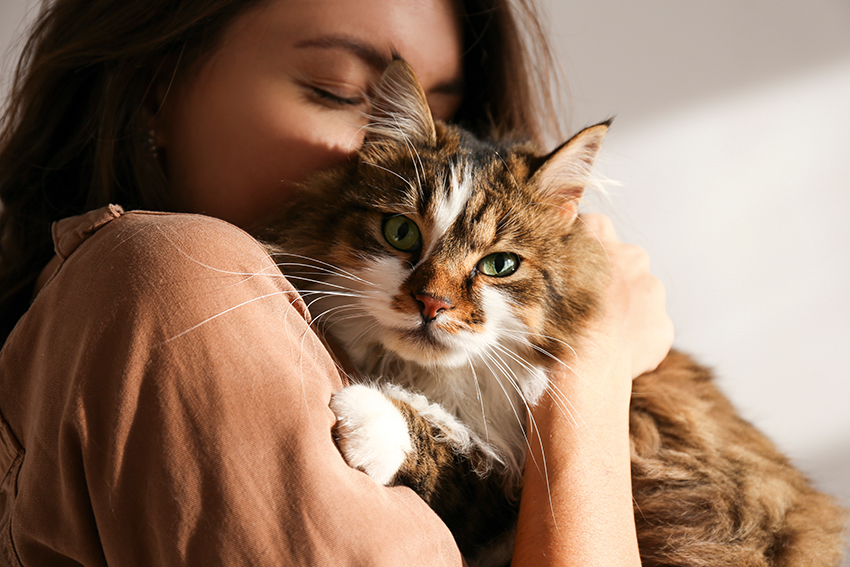 Not as cuddly a cat as the champion Persian!

It was my first time visiting the National Cat Show in London where Louis Wain was once chair. My book ‘Do Cats Need Shrinks?’ was drawing all sorts of attention and I was being taken around by the current chair to meet some of the exhibitors and their cats. A rather ‘well structured’ lady in a very colourful flowery dress proudly showed me her champion, a Persian I think, and brought me up to speed about the breed and her particular lineage. Suddenly, she reached down into her wobbling cleavage and pulled out a kitten, squinting and blinking in the sudden exposure to the light! I didn’t know quite what to say or where to look, but managed to splutter out that this must be the most intensely cuddled kitten on the planet, and ushered myself along to meet a safer exhibitor in the Siamese section!

There are but few lion prides who learn how, or become brave enough, to take down an elephant but any predator will take a fresh free meal. And so, lady luck certainly shone on a pride of a dozen or so lions and their cubs in the Madikwe Reserve last year as we discovered them feasting on one hapless old female elephant that had died of old age right in their patch! There was far more meat than they could consume and after several face-stuffing meals they had decided to abandon the now fast-rotting carcass to the next raft of diners. Except for one pot bellied wee cub, who decided that she was going to sit on top of the dead behemoth and keep eating until it was all gone.

Her mother and her pride were not going to wait, and sloped off into the bush, and quite some distance to sleep off their final meal. And so there she sat, the loneliest lion cub in the world, alternating between chewing off another mouthful of rotting flesh and mewing pitifully to her long-departed family. It was going to be a long haul, this battle between gluttony and loneliness, but she was still there the following morning, but now far too stuffed to move anywhere anyway.

As the sun got ever hotter and the elephant ever stinkier, and the hyenas bolder and bolder, she finally fell down off her perch and waddled off in what she hoped was the direction of her pride and chose not to be lonely anymore. 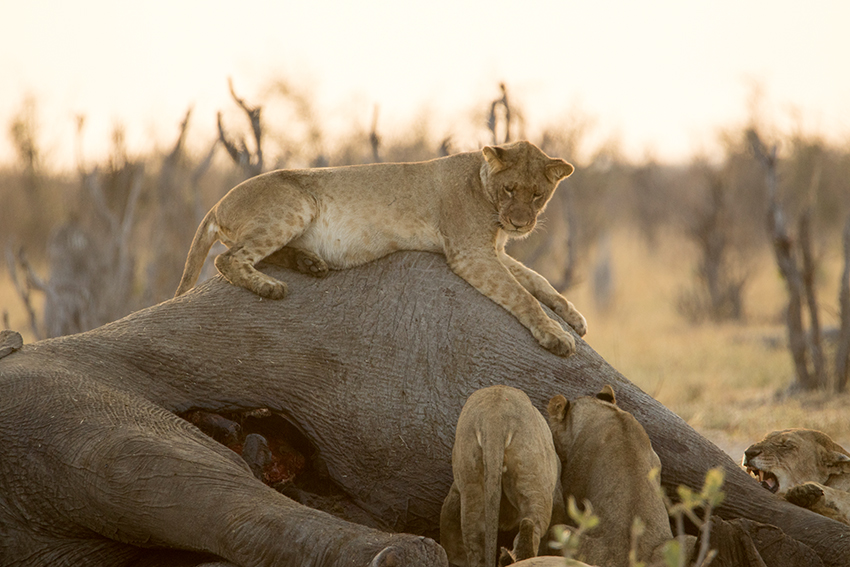 Elephants are usually too big a meal for even a pride of lions!

I was trapping another group of feral cats in Regent’s Park, London and while the healthy adults were all to be returned to the site after surgery by agreement with the Park authorities, kittens were to be removed and found new homes. Out of the corner of my eye, I saw a grey kitten dart into a drain pipe by the leaf yard of the park. Unwisely, but by necessity, I pursued and stuck my hand down the pipe in the hope of grabbing her. Actually, she grabbed me, biting right through my little finger and thus catching herself.

I pulled her out, doing my best to ignore the pain, and prised her off my finger and into a carrying pen. By chance, she was a beautiful blue (grey) colour, exactly what my brother and his family had been looking for. They named her Mimi and tamed her very quickly into a lovely family pet, with a glorious fluffy coat who was friendly to everyone — except me.

She never forgot me and every time I went to visit, I would barely step into the house than Mimi was gone at lightning speed out of the cat flap, frightened to death! I tried not to take it personally, after all, I had given her this lovely new life and it was she who had bitten through my finger, but there we are. For nineteen years until she died, she remained frightened, nay terrified, of me. 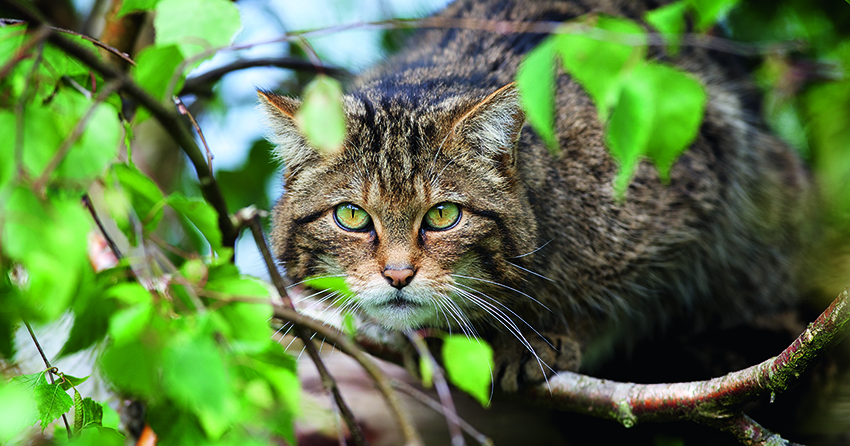 Campbell was a Scottish Wild Cat.

I once took in a Scottish Wild Cat kitten called Campbell because he had been found soaking wet and abandoned in Glencoe, Scotland. He had had a littermate called Macgregor but sadly he didn’t survive the first night.

Campbell joined a house of one other cat and three dogs for his rehabilitation and preparation for his intended release back into the wild when he was older. The household dog pack included a huge but delightfully sweet-natured Bullmastiff called Cassie whose size and enormous deep bark was of no concern at all to our young clansman. Having recovered from his ordeal in the protected pen, Campbell set about asserting his wilder nature into the family upon being allowed the freedom of the house.

So it was that one early morning when he was no more than about six weeks old, I came into the kitchen to make a first cup of tea to find a rather chilly, worried, and distraught Cassie lying on the cold tiles looking plaintifully up at me. And there, right in the middle of her equally huge beanbag bed was one fast asleep tiny little kitten who had bravely stared poor sweet Cassie off her bed and taken up sole cosy occupancy. From that moment onwards, we knew that young Campbell would have no problems at all with the challenges of life that lay ahead! Bravery was his middle name, or should that have been Braveheart perhaps?

Maybe after reading this, you too would like to assemble your list of favourite felines under these gentle and carefully observed headings, and then revel all the more in the legacy of the vastly increased popularity of cats engendered by Louis Wain’s life and talents.