In a life spent working with cats of all sizes, Peter tells of a special encounter with a wild cat in Africa.

I’ve been so very lucky to have spent so much of my professional life working with cats of all sizes. It all started in childhood with our glorious long-haired ginger and white tomcat called Thumper that my parents acquired as a kitten from one of the guys who installed our central heating (funny the details one can remember, even as a three-year old, when there is a cat involved!).

He lived to a ripe old age, with me all through school and still at home as I journeyed on into university and beyond, finally passing just as I began my first work with cats — the humane control of feral cats in London’s Regent’s Park to be precise. It’s as if he had been sent to chaperone me into some kind of feline destiny.

I have ended up studying and working with lots of feral cats, wild cats, cats in zoos, pet cats, and homeless cats in over thirty years of behaviour practice. I’ve spent an awful lot of time teaching and lecturing about cats and their behaviour all over the world in the company of cat lovers and professionals.

I’ve also been lucky enough to observe so many cats in the wild, especially in Africa where I now help run safaris, including an annual ‘Big Cat’ special, (see details of this year’s trip by visiting raesafaris.co.za/set-departures/big-cats/). I especially delight in trying to track down the big three on this safari — lion, leopard, and cheetah — in the amazing Manyaleti concession in the Low Veld of South Africa — we have never failed. 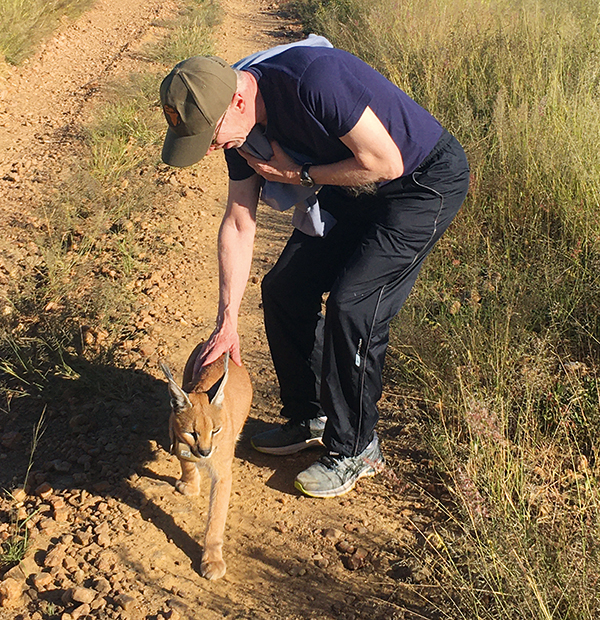 A special meeting with a Caracal.

There is, however, a cat we have seen elsewhere across Africa but never seen there, even though he ranges well across the region, and he is a ginger! Well, more orange or sandy ochre, depending on the light, but close enough for me to be instantly attracted to him because of his glorious colouration. He is the Caracal, or African Lynx as he is sometimes known.

We explored the Caracal’s behaviour and biology in our recent series on African felids in Your Cat. Just as that was going to press, my safari colleagues and I found ourselves in the amazing wildlife habitat that is Namibia. And at one of our favourite wildlife reserves where the management are 100 per cent dedicated to the protection of wildlife, education about its conservation, and the treatment and rehabilitation of individual animals injured on roads or in other accidents.

To the delight of us all, the rangers invited us to see Missy, their beautiful-beyond-belief Caracal who was undergoing long-term rehabilitation after being rescued as a kitten from a local farm where the Caracal, and just about every wild predator, is regarded as vermin to be shot and poisoned. Missy was orphaned in this process but the farmer at least called the reserve and offered her up if they would care to come and collect her.

The team had done a great job and reared Missy to adulthood, and tamed her in much of the necessary handling and feeding process. So, we not only got to meet Missy, we got to fuss and stroke her, providing she came and rubbed round us, which she did! I was in raptures, as was my partner, Stella. We would have forgotten all the rules and abandoned common sense for Missy’s welfare if we could have been allowed to simply take her home to Finland! Once again, I had been gingered! What a glorious animal.

Out In the wild

I have seen quite a few in the wild, usually just quick glimpses as they are usually secretive and well camouflaged. While a tame Caracal is not the same as a wild one in its natural habitat, we got a taste of not only being in that habitat with Missy, but also to go hunting with her as she went searching for her breakfast.

We met the guy in charge of Missy’s care on the side of a dusty track in the middle of nowhere in a perfect spot of half open grassy savannah, with odd clumps of bush for a Caracal to hunt in. Missy was let out of her travelling pen and fitted with a radio collar so that she could be tracked and found if she wandered out of sight. She didn’t seem bothered by it at all and instead came to greet all her guests in total confidence, rubbing around our legs, purring loudly, and raising her head like some big soppy pet cat to be stroked. That done, she set off into the long grass, listening and looking for the slightest sign of some prey, most likely birds at that time of the morning.

We followed as quietly as we could, and she seemed entirely unperturbed by the admiring audience. Every so often she stopped, sniffed the air, and backtracked, sometimes walking right back to us, pausing to say hello and purr on the way. It was a fantastic experience. We walked for half an hour, totally engrossed in the wilds of Africa, in the company of a perfectly adapted predator doing what predators are designed to do. Suddenly, she simply set off at high speed into a thick broad clump of long grass. She ran at top speed right through it, and we lost sight of her, but on the other side, a flock of startled guinea fowl shot noisily straight in to the air, screaming their alarm call. Missy had heard them and had decided instantly to blindly crash ambush the source of the sound and hope for success. She got one, a young guinea fowl in the wrong place at the wrong time became a Caracal’s breakfast.

Our guides took the bird away from her at that point and she happily gave it up. Wise to the situation, they knew that a well-fed Missy was less likely to be enticed back into her pen and taken back to her enclosure. But once we had walked with her back to the truck, now a good 20 minutes away, her radio collar was removed and she was safely back in her pen. They carefully bagged her trophy and took it back to give to her for breakfast later.

For all my experiences with cats, I found myself spellbound, hugely better informed about the ways cats think and behave, and even more appreciative of the evolutionary pinnacle that cats occupy, in all their sizes. Nothing had ever before so finally brought home to me how vital it is for a cat’s well-being to fulfil that hunting purpose. For Missy, it was an absolutely vital part of her rehabilitation that she learned to apply her inbuilt hunting behaviours, out there in her natural habitat.

She had already learned to ignore any surrounding distractions, including us, but this was only a part of the programme. While the aim was ultimately to release her to a suitable hunting territory, she would have to learn to protect herself from bigger threats. Other larger predators kill smaller ones just to take out any form of competition. Caracals are solitary hunters and so all other caracals are threats, except at breeding time and when mothers raise kittens.

This would be a long and patient process, and soon Missy would not be able to be accompanied on her morning hunts. We had been fortunate to be there to share in that dramatic moment that was part of her rehabilitation and integration into the wild.

No Finland for her, her home is Africa, and she is well on the way to being where she was born to be, with Man’s help, and appropriately so, after Man had displaced her from it.

The cost of such rehabilitation in any programme is not cheap, but, of course worth every penny. It is to support projects such as this that Stella, Andrew Rae, and I have formed a not for profit conservation organisation: WorthWildAfrica. And guess what, the next project that we are aiming to help is by purchasing a radio collar and a year’s worth of satellite tracking for another Caracal on her release into a protected reserve in South Africa. She can thank Missy for our support and that incredible hands-on experience of hunting.

The sole aim of WorthWildAfrica (WWA) is very simple: to raise funds to assist small projects involved in the study, monitoring, and/or conservation of animal species or those that help build positive relations and understanding between wildlife and local people. The distribution of funds is in the shape of equipment, never cash. The aim is to support existing projects and enable them to acquire useful items that their main support or other funds don’t cover but which would enable them to get better results.

WWA operates a totally transparent, constantly updated account of all money received and the value of all equipment purchased and distributed, with reports and records of the equipment being used. WWA’s office management and staff costs are funded by entirely separate private donations of money, time, and office space by Peter, his partner Stella Grgic, and Andrew via Rae Safaris. WWA’s Advisory Panel of expert volunteer advisors help us assess the validity of any application for support according to their individual professional capacity, skill sets, and national location.

With your help, donations, advice, and involvement, WWA can make a huge difference across a wide range of supported projects.