We discover the hidden Pet Cemetery Gillian Carrick uncovers a hidden feline attraction in the heart of the capital.

In the Your Cat Tourist Guide, we’re introducing our readers to some cat-inspired tourist hotspots around the UK and beyond. In this issue, Gillian takes us to this country’s original pet cemetery.

Tucked away in a corner of one of London’s top parks is a rather special graveyard: The Secret Pet Cemetery of Hyde Park. It also happens to be the UK’s first public pet burial ground and a treasure trove of Victorian pet life.

Some of us might have walked past Victoria Lodge, with its imposing wrought iron gate leading to the little garden cemetery beyond, and been unaware of its hidden delights. So, for a real insight into this dedicated spot to long-lost pets, it’s worth taking one of the monthly tours organised by the Royal Parks, which manages the graveyard. You won’t be disappointed.

I joined a group as we gingerly weaved our way through the pet-sized headstones (some listing heavily as time’s gone by) of Pansy, Wobbles, Topsy, Wee, and Tum, to name but a few. Some of the inscriptions — such as ‘Darling Dolly’, ‘My Sunbeam’, ‘My Consolation’, ‘My Joy’ — really tug at the heartstrings. And they serve to remind us of the deep sense of loss, comparable to how we feel today, felt by so many Victorian owners faced with the prospect of life without their precious pet.

Some of the gravestones are shaped as beds, suggesting how many held a hope in their hearts that one day they and their pet would be reunited. ‘I’m only sleeping master’ says one poignant message. 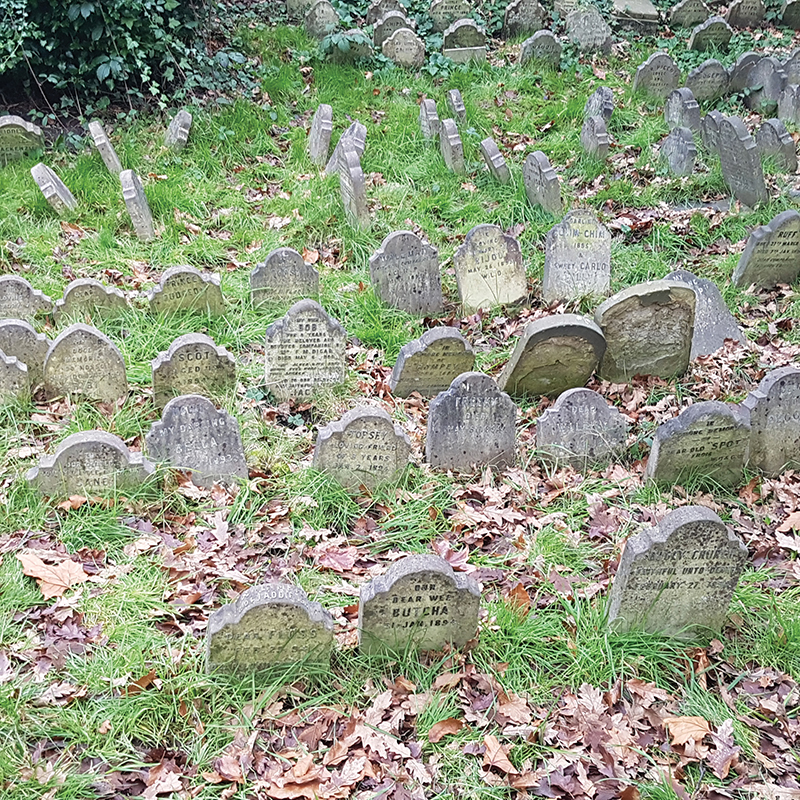 You can take a guided tour.

The writer George Orwell described the cemetery as “perhaps the most horrible spectacle in Britain.” A view Jonathan Grun, the cemetery’s volunteer guide, unsurprisingly doesn’t support. He said: “Visitors are generally surprised, astonished, and charmed when they come here. It’s arguably the happiest cemetery in the world, which speaks of the wonderful relationship we have with our pets and the happy hours spent in their company.”

The impressive headstone of one Ginger Blyth, ‘A King of Pussies’, greets you with a purr (or I’d like to think so). Ginger was one of the later burials (strings were pulled to get him a place here) and as his name suggests, he was a ginger tom cat, who lived in nearby Westbourne Terrace. Mercifully, he avoided getting into any scrapes with carriages or cars and managed to live to the ripe old age of 24 years and 7 months, finally dying in March 1946 (roughly 116 in cat years).

The Shakespearian quote on his headstone —’His little life was rounded with a sleep’ (from ‘The Tempest’) — suggests he had a good run at being a contented cat. He would have been oblivious to the global events he was living through, as he no doubt enjoyed endless cat naps in a sunny spot in the garden, as king of a clowder of cats.

Opening of the cemetery

The cemetery opened in 1881 and closed in 1976, and evolved really by accident, courtesy of the lodge’s gatekeeper. There’s no official register and it’s not easy to tell exactly who’s buried here, whether cat or dog, and how many animals lie together in each grave.

The first pet to be buried here was Cherry, owned by the Barned family who often visited Hyde Park, and by befriending the keeper of Victoria Lodge, managed to secure a plot in the garden for their beloved Maltese Terrier.

Next in line for burial was the precious pet of the wife of Prince George, Duke of Cambridge. Also called Prince, he sadly met a sorry end under a carriage wheel.

This matchless graveyard of a bygone age clearly reflects the changing human-pet relationship of the Victorian era, when new animal welfare laws were introduced, animal shelters sprung up, and the RSPCA was formed.

There are 475 visible graves (some are believed to have toppled over and been buried under vegetation), with an estimated 1,000 animals, including cats, dogs, monkeys, and birds, interred here.

It’s been said there’s a 38-year-old cat among them. 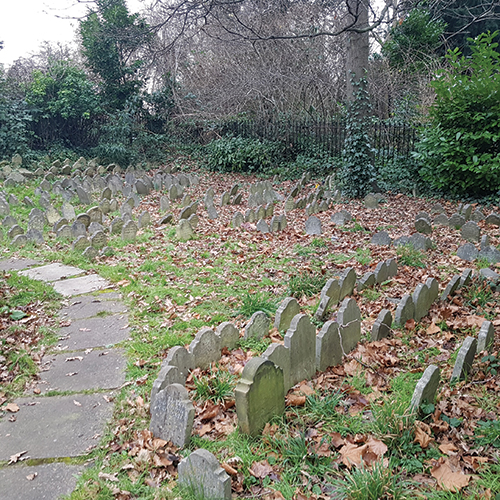 You can take a guided tour.

Eric Tourigny, a lecturer in the archaeology of pet cemeteries at Newcastle University, has identified other cats among the graves. These include Yum-Yum (who clearly had a discerning palate) and notched up 12 years, before dying in 1895. His gravestone reads: ‘A most gentle…. A most loving….Persian Cat.’

Eric has also located some graves of cats buried together: Snow, who made it to 15 in December 1924, and Smut who joined him in cat heaven two years later in February 1926, aged 10. “As they are both commemorated on the same stone, they’re probably from the same household,” he says. Felis and White Kitty are also buried together.

There’s another grave with a Portuguese inscription which translates to ‘In sweet memory of our dear kitten Bibi…also Crocodile.’ As cat names go, this is an unusual one! Kim, who died at 15 in July 1953, was one of the last burials.

It’s hard to say if all the cats were as local as Ginger. The likelihood is that some came from further afield, as this prestigious burial ground quickly became the pet cemetery of choice (at a price) for the well-to-do looking for an appropriate final resting place for their sorely missed cat. 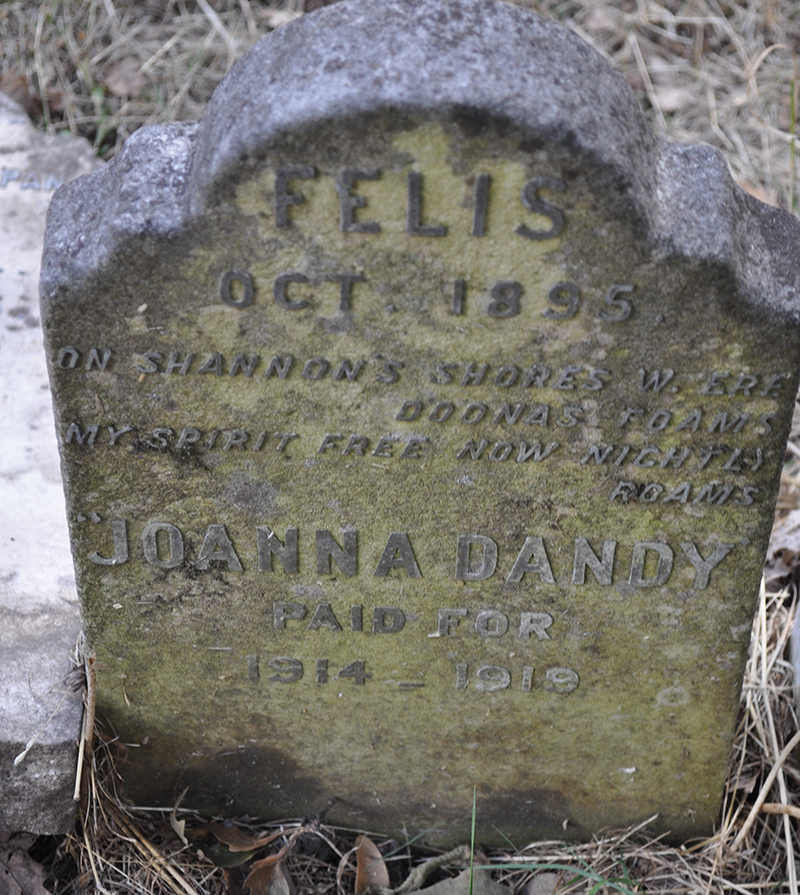 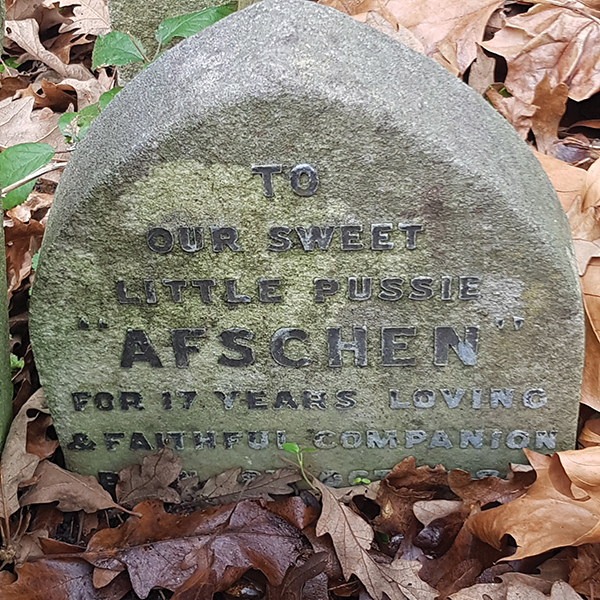 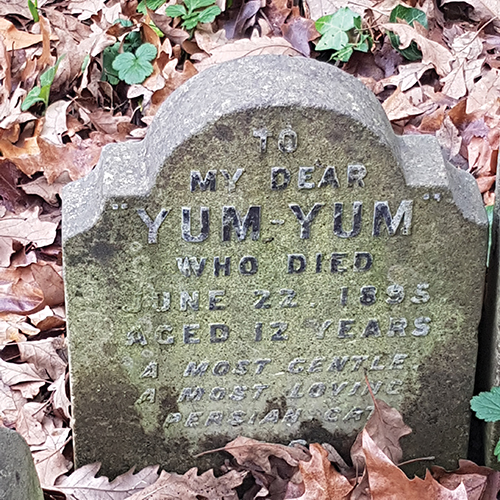 After all, Victorian felines were starting to be seen less as vermin catchers and more as welcome additions to the family. Their star began rising with the inception of the first cat show in London in 1871.

The popular Victorian artist Louis Wain (whose life has been celebrated in a recent film) also did his bit to change the public’s perception of cats. His wonderful paintings of lovely felines playing cricket, dressing up, wearing spectacles no less, and having fun in the ‘Perfect Paradise of Purrs’, made a real impact.

I hope the cats of The Secret Pet Cemetery are still purring away in their heavenly playground in the park.

For further information and to book for the next guided tour, please contact the Royal Parks. Visit https://www.royalparks.org.uk/