Cats as therapy pets are not that common but they have an incredible impact.

Not all heroes wear capes — some have fur. And it’s not always great dramatic feats that are heroic, it can be small acts of kindness and calmness. Therapy animals do just this, visiting people in stressful environments and  helping them cope. Dogs are  well-known as being support animals, but cats are also great at this, bringing their feline charm to work some magic. 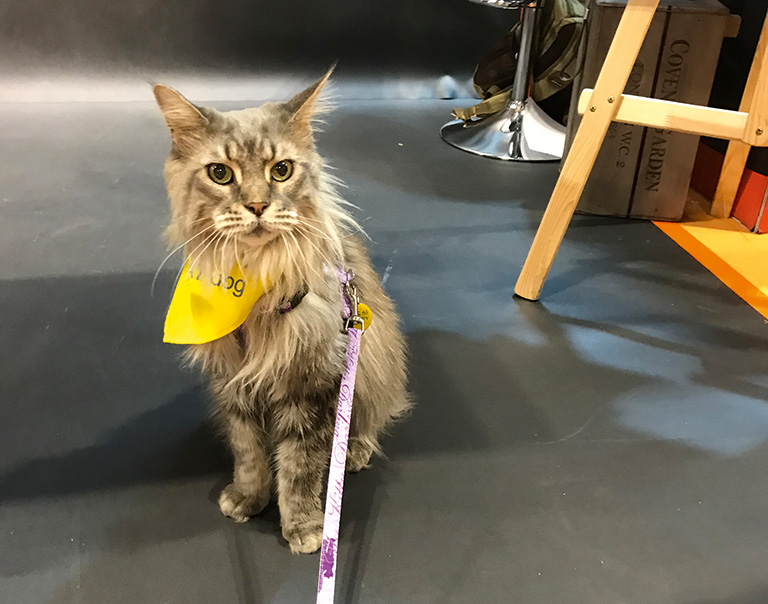 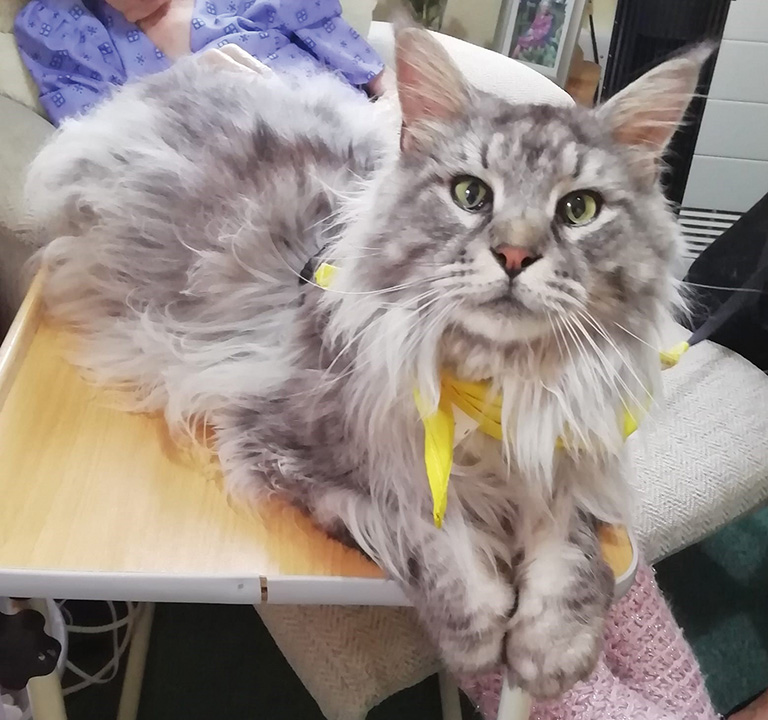 Beautiful Maine Coons Allie and Benjen aren’t just pretty faces — they’re specially trained therapy cats and regular visitors to Collingtree Care Home in Northampton. The furry felines, who are grandma and grandson, make a real difference to the lives of the residents, spreading joy, bringing comfort, and breaking up the days.

Their owner, Josie Hughes, said that each visit was different; sometimes the cats would go between quite a few residents, letting them stroke them and purring, and, at other times, they would focus on individuals, curling up next to them.

“I take one cat at a time, on a harness, and we split our visit between the residents who are more able and those with dementia,” she said.

“The residents absolutely love it and the difference the cats make to people is unbelievable. As soon as
I bring the cat carrier into the home, the word goes round that the cat is visiting and there’s a real buzz.”

Unfortunately, their visits have been put on hold during the pandemic to protect the residents, but will resume as soon as it’s safely possible.

Josie, who works for the Open University, added: “I think the cats are complete heroes as their presence can be transformative to people. Just spending half an hour with someone with dementia can mean so much — having a cat to cuddle makes such a difference to someone’s mental health and their outlook.”

The cats needed to each pass a stringent assessment to be registered as a therapy cat and Josie had to have security and health checks.

Allie, a blue silver tabby, was a show cat so was used to being in strange environments and visiting new places. Black silver tabby Benjen had been returned to Josie as his owners had split up and she knew that his gentle nature would make him perfect as a therapy cat.

Josie, from Hartwell in south Northamptonshire, said the cats really enjoy all the attention that they get: “Maine Coons are very sociable cats. Allie is very laid back and Benjen is simply a sweetheart.”

She said that as well as the physical side of being able to stroke the cats, the residents liked to ask questions about them and often it sparked memories and tales of cats they’ve had in the past.

Josie said: “They cuddle up to some residents and if their family are with them, they might sit with them for a while. They seem to gravitate to people who are cat lovers or those who could do with cheering up.” 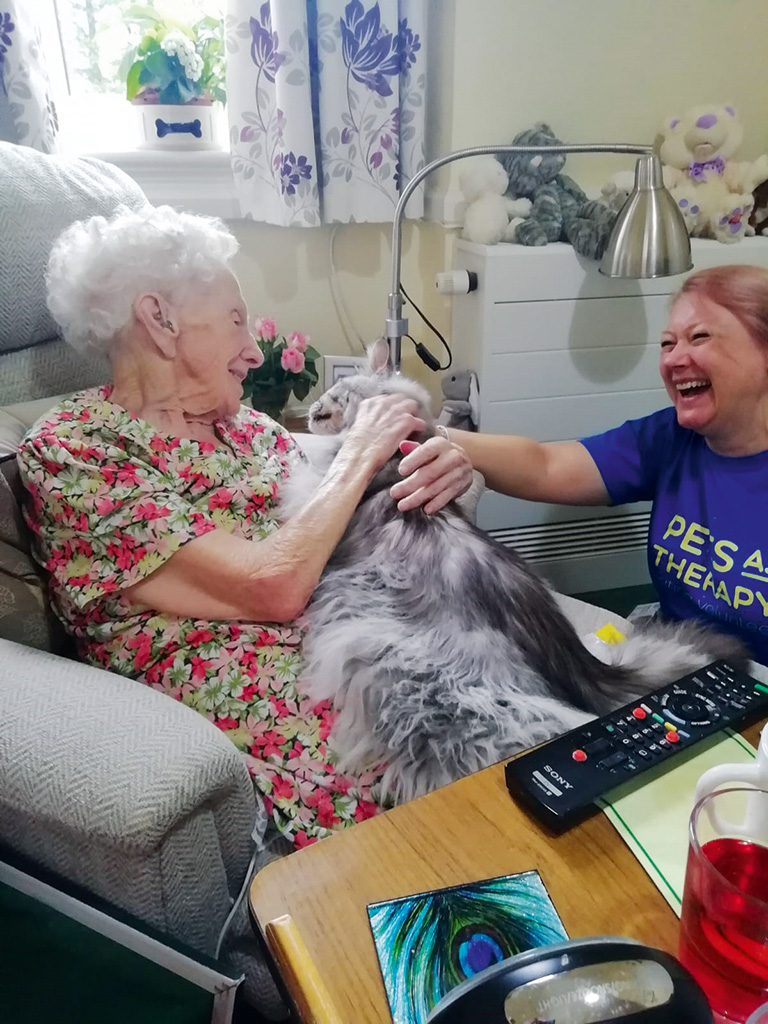 As well as visiting the home, Benjen had been making monthly visits to 104-year-old Margaret Jeffs who missed having a cat and adored these visits. Josie said that at one time they were asked to go for what looked like one final visit as the elderly woman was unwell, but when she knew he was coming, she perked up, got dressed and out of bed specifically to see Benjen.

“A cat on your bed or nestled on your lap for a cuddle can bring real calm and a feeling of peace to the resident. They cheer them up when they need it and the residents definitely feel a sense of well-being when they are around. They are heroes because they are so good-natured and show the residents such love.”

The home also has its own resident cat, Bella, and a life-like interactive robot cat. Natalie added: “These cats make our rooms feel like home for many of our residents who have had pets all their lives. They become part of the family and give residents something to focus on and care for. They provide laughter and entertainment, as well as comfort and warmth. They are heroes through and through.” 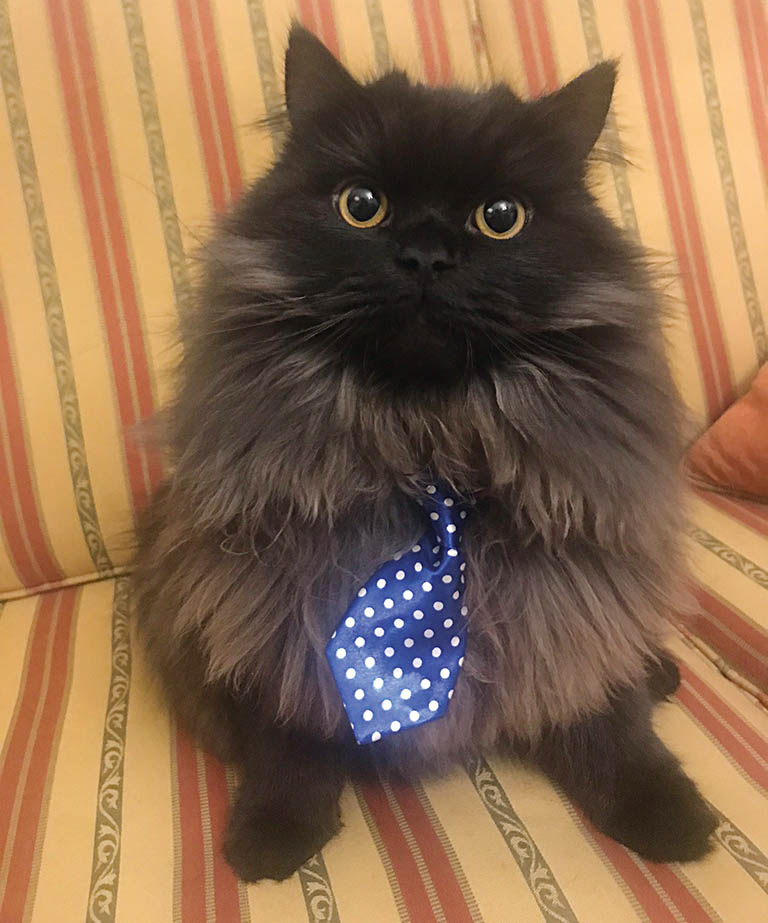 London with a tie, of course! 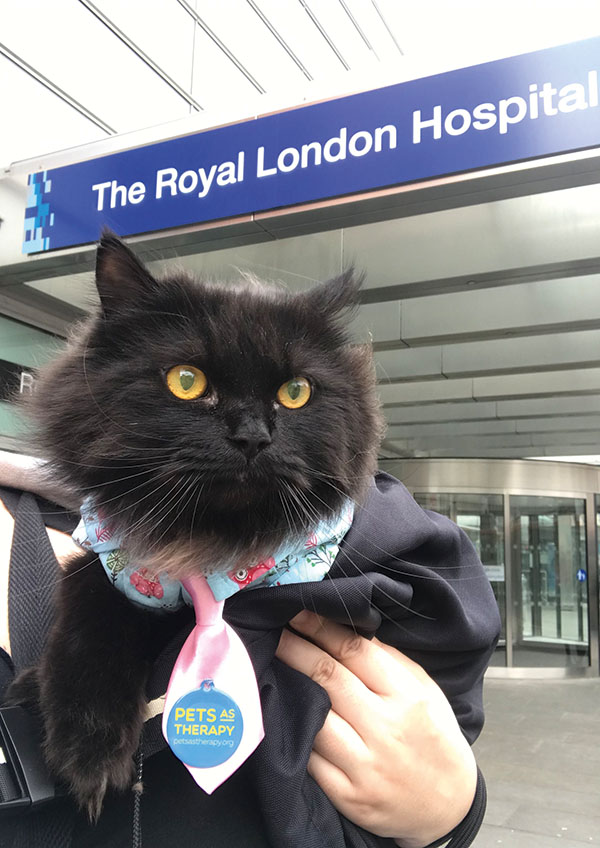 Hospital can be a scary place, but one cat is on a mission to calm and comfort patients. Mr London Meow — or London for short — is a trained therapy cat who visits the Royal London and Whipps Cross hospitals in the capital.

The half-Ragdoll and half-Persian’s sunny disposition, his curiosity for new things, and the fact he loves being out and about (even travelling around the world) makes him perfect for the role.

“When London walks into a ward, you can feel the excitement build up,” says his owner Isabel Serafim. “It gives the patients something positive to think about during what can be a very difficult period of their lives.

“Some people may be recovering from a car accident, an amputation, being stabbed or shot; sometimes the police are present — and London’s visit gives them the chance to escape their pain. Stroking him or having him sit on their lap can transport patients from the four walls of the ward and remind them of happy times.”

London is one of the 65 registered cats with the charity Pets as Therapy (as opposed to about 6,000 dogs) and the charity is always on the lookout for new colleagues.

“We know first-hand the joy some whiskers can give,” said Isabel. “Therapy cats like London are definitely heroes — not in the rescuing people from burning buildings sort of way — but these days the definition of a hero could be doing small acts of kindness every day, and that’s what London does.”

Isabel, an IT city worker, said that London really enjoyed visiting patients, often anticipating who needed comfort. “One day London was pulling at his harness to go to a particular patient in a side-room. She was so happy to see him and he lay alongside her like a stuffed toy and she cuddled him for a good 10 minutes. Afterwards, the nurse told me that she had had very sad news and was struggling to cope. I could see that being close to London gave her some comfort and solace.”

His trips to the children’s ward always raise smiles in the young patients, who are excited to see him and talk about their own pets and ask questions about London. Isabel said that on one Sunday, London made a beeline for a six-year-old, who was captivated by him, stroking his long fur and listening to him purr as he lay next to her. All the while, her mother fed the girl spoonfuls of pasta.

“Later, the patient’s mother came up to me and gave me a hug,” said Isabel, who lives near the hospitals. “It turned out that the little girl hadn’t eaten in days, until London came along.”

The black two-year-old is a real character, always wearing a tie and often wearing full costumes, for example dressing up as a doctor, the Easter bunny or wearing a jaunty jumper to match his gorgeous yellow eyes. “People may wonder why he’s dressed up,” said Isabel, 42, “but I spray calming product on his clothes when he’s working and that can help him stay relaxed if anything out of the ordinary happens.”

The welfare of patients’ always comes first and at the moment his visits have been curtailed due to Covid-19. But Isabel and London are looking forward to the day when they can resume their trips.

“Therapy animals are amazing,” added Isabel. “London does one act of kindness after another, spreading love and bringing some comfort to people who can be at their lowest point. He’s a fluffy hero with four paws and a bow tie!”