Colours With so many different colours and patterns to choose from, it's worth visiting cat shows to take a look at what's available and to talk to owners

Grooming The high-maintenance Persian needs to be groomed regularly. Eyes and ears also need to be wiped

Often considered to be the most glamorous of all the pedigree cat breeds, the beautiful Persian was said to have originated from cats imported into Italy from Iran in around 1620 by the Italian composer and author, Pietro della Valle, and into France at about the same time from Ankara, Turkey by the French astronomer, Nicholas-Claude Fabri de Peiresc. However, recent genetic research indicates that today’s Persian is related to cats from Western Europe rather than the Near East.

Whatever the historical ancestry of the breed, Persian longhair cats were exhibited at the first ever cat show held at the Crystal Palace on July 13, 1871 (this year is the 150th anniversary of this event). If you could get into a time machine and travel back to that day in south London and visit the show (which I would love to do!), it is doubtful that you would recognise the Persian of Victorian times as the same cat that appears at today’s cat shows.  Illustrations of the time show that it was rounder headed and shorter faced than a domestic cat, but had larger ears and was longer nosed than the modern Persian, which is the result of selective breeding over decades. 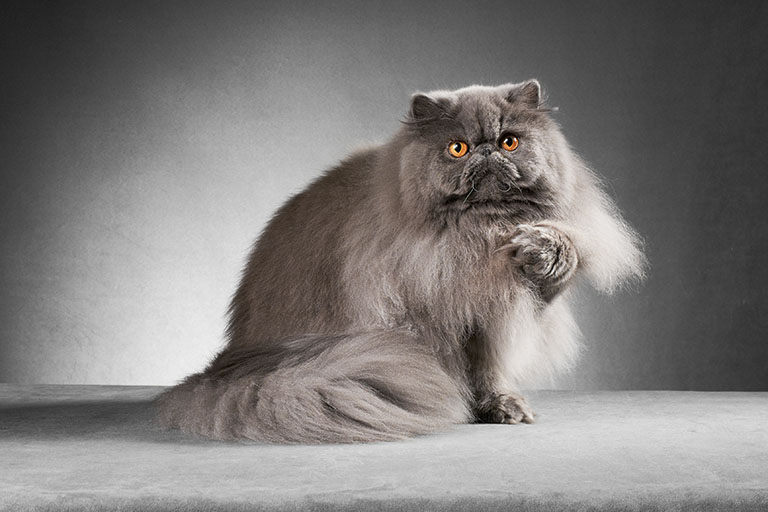 The Persian is a medium to large-sized cat, heavily boned. The head is round with a broad skull, which should be smooth to the touch without depressions or protrusions. The ears are small and round tipped, fitting into the rounded contours of the head, with long furnishings.

The large round eyes are set wide apart lending a sweet, open expression to the face. The nose is short and broad with a definite stop. The nose break should be wide and the nose leather fully formed with open nostrils, allowing free passage of air. The cheeks should be round and full, and the muzzle wide and the chin firm.

A short, thick neck leads to a short, cobby shaped body, low on the legs, with a broad chest, shoulders, and rump. The legs are thick and the paws large and round. To balance this rounded shape, the tail is short and well furnished, in proportion with the body.

Their crowning glory is its long, thick coat, which is fine and soft in texture. When in full coat, during the colder months, a full frill will frame the face and cover the shoulders, continuing into a deep frill between the front legs.

The Persian comes in many different colours and patterns. There are five different pattern groups:

● Self (or Solid): black, white, blue, red, cream, chocolate, and lilac. These all have orange or copper eyes, with the exception of the white which can have orange/copper/blue eyes, or be odd-eyed (one orange and one blue eye).

● Tabby: There are three different patterns allowed; classic (or blotched), mackerel, and spotted, in silver and standard colours and including tortie tabbies; all are orange-eyed.

● Tortoiseshell, Tortie and White, and Bi-Colours: The torties can be both patched and intermingled, and come in black and red, blue-cream, chocolate and red, and lilac-tortie. The tortie and white comes in standard colours and tabby.  The Bi-Colours come in most of the above colours and patterns and can be high white (colour only on the face and a fully coloured tail), or low white, with just some white to the face, all four limbs, the underbelly and chest, and some white to the face; again, they are orange-eyed.

● Colourpoint: This pattern is pointed, with the mask, legs, and tail in a contrasting colour to the body. A wide range of colours is accepted, including tabby and tortie points, and the eye colour is blue. 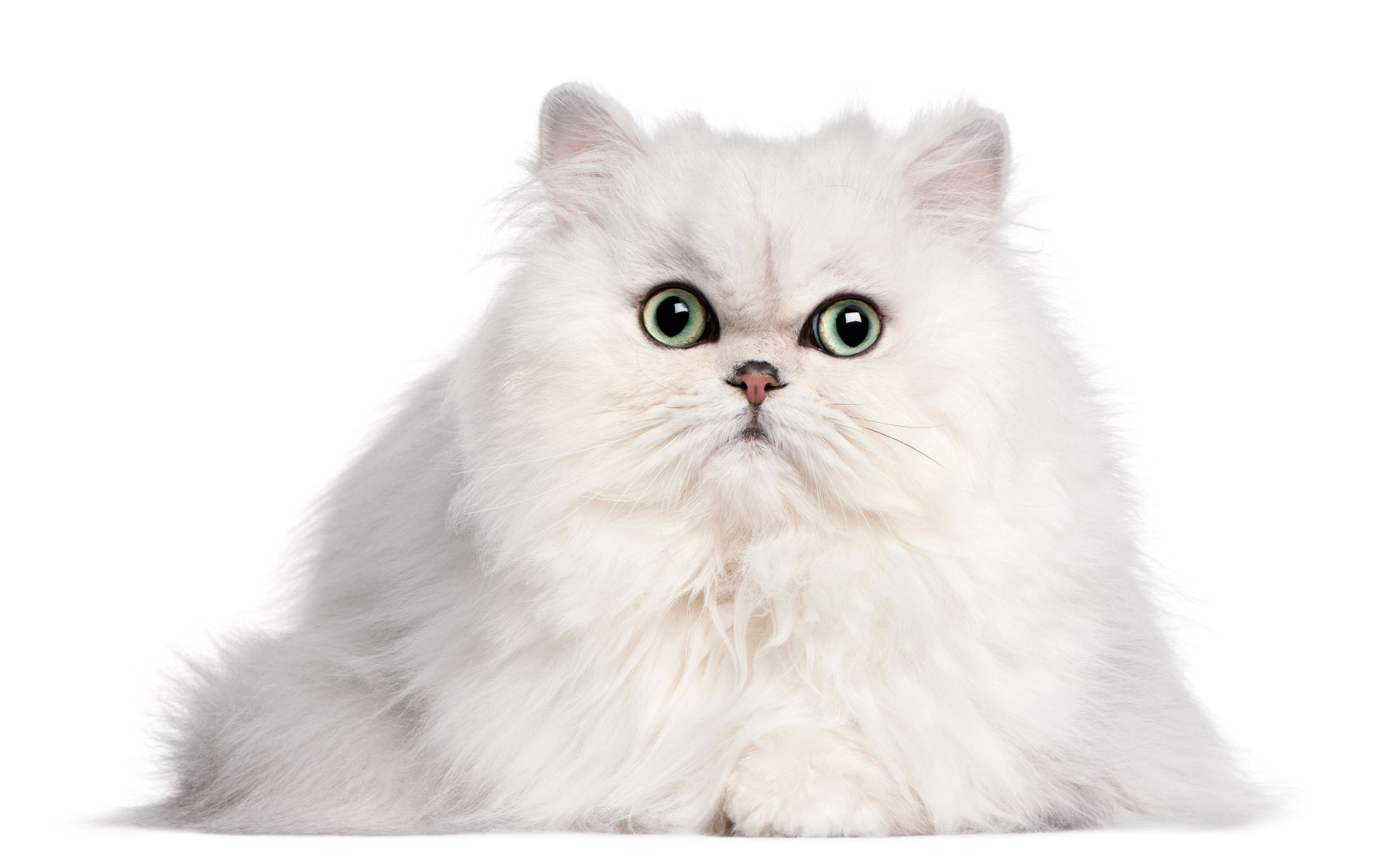 They are noted for their sweet, gentle temperament and fits in well with most households, making excellent family pets.

They are tolerant of each other and most other cats and dogs, but may find the more boisterous nature of foreign breeds a bit too much to cope with. They like routine and a calm atmosphere, and won’t be found leaping on to high places, although they are playful and enjoy interaction with their human family.

Affectionate and tactile, they enjoy being gently handled and to sit on your lap or beside you. They have quiet voices, but know how to get your attention, usually by gazing at you with their large, lustrous eyes. 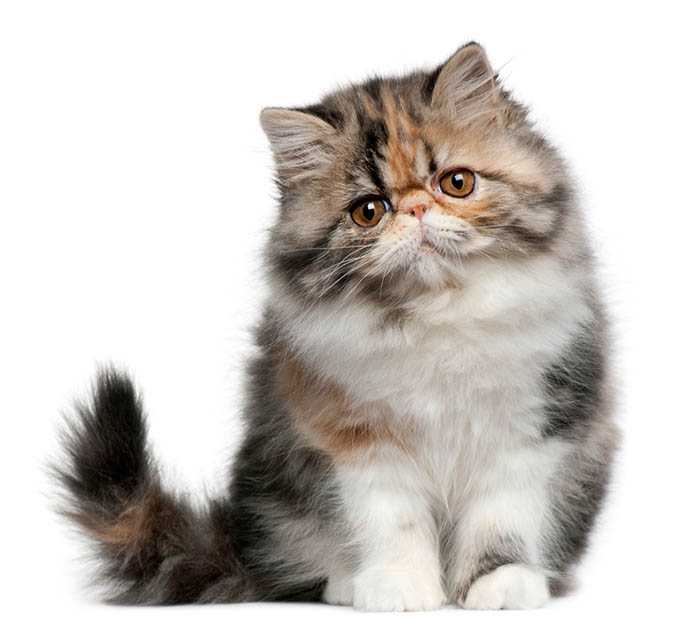 The coat of a Persian requires daily care but this should not be onerous. Depending on the time of year and length and thickness of the coat, a regular 10-minute grooming session will keep your Persian looking beautiful and feeling comfortable.

The best tools for this are combs, rather than brushes, and a wide-toothed comb, plus a smaller comb for the face and legs are all that are required. Particular attention should be paid to the areas under the front legs, the trousers, and under the tail; also check ears and claws.

If you are buying a Persian kitten, your breeder should show you how the kitten has been used to being groomed and the best way to continue the routine. The eyes can be cleaned with cotton wool and warm, boiled water to help avoid staining.

As the Persian is a brachycephalic breed (having a relatively broad, short skull), care should be taken that the type is not too extreme for the health and comfort of the cat.

All Persians used for breeding should be DNA tested to ensure they are free of Polycystic Kidney Disease (PKD) and Progressive Retinal Atrophy (PRApd). If you are purchasing a Persian kitten, always ensure the breeder includes copies of the parents’ DNA negative tests, along with the other necessary paperwork.

Persians are generally healthy and live to around 14 — 15 years, many much longer.