You could think of the Russian Blue as a dapper gentleman of a cat - they are known for their quiet voices and gentle natures, while possessing a lot of intelligence, and their serene faces give them the air of one deep in thought. It's these very qualities which breeders agree make them a good choice for families or elderly owners - or pretty much anyone!

Elisabeth Stark, chairman of the Russian and Abyssinian Cat Club of Scotland, adores these sedate and chilled-out beauties: "We call the Russian Blue a 'natural' breed as they aren't an extreme or flashy breed, they're very elegant and graceful, generally very calm and good companions. They might be shy when they are with strangers but they are very home loving and get very attached to their humans. One of the things I love about them is that when I watch TV they sit and watch it with me! They need to have their own humans and like to suss new people out who come into the house - but when they've decided they like you, they love you!"

It's true - Russian Blues get very attached their humans and become devoted to their owners. They can be shy with new people but once they've decided you're a 'good one', they will lavish you with love and affection.

Russians are excellent family pets as they get on very well with dogs and most other cats and breeders say it is very rare for a Russian to bite or scratch. Caroline Moore of the Russian Blue Breeders Association says: "They're extremely loving, some will want to be on you and others will simply want to be next to you. I've found that my males tend to be more loving and females love you when they need you, they're a bit more independent!" 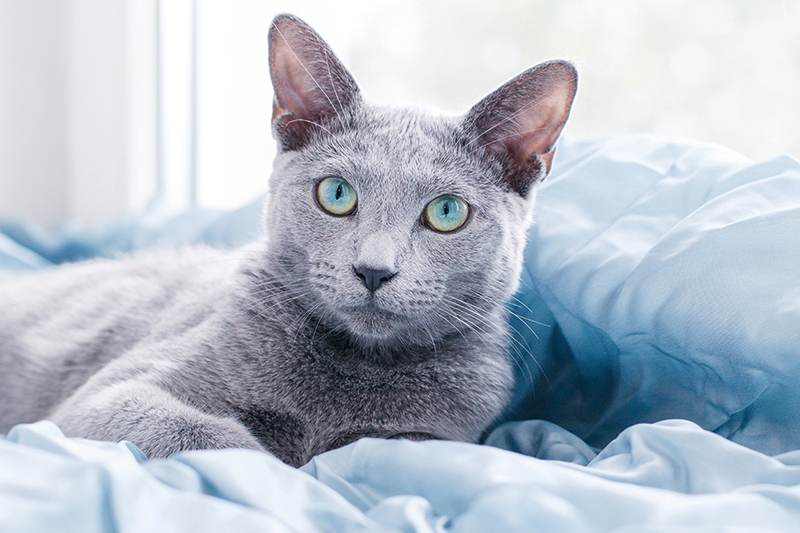 As the name suggests, Russian Blues have beautiful silvery-blue fur which is easy to groom. It's short but thick and velvety soft with a dense undercoat. They have stunning, almond-shaped green eyes in a short, wedge-shaped head topped with large, pointed, high set ears. The body is long and graceful with long legs, small oval paws and a long, tapering tail.

It is thought that the Russian Blue was first shipped to the UK back in 1860 by British sailors returning from the Russian port of Archangel, so they were known as Archangel cats. The breed was given its own class in 1912 and was renamed Russian Revolution five years later, finally given the name Russian Blue in 1948. Originally, the breed was outcrossed with Siamese (this was discontinued in the 1960s) and British Shorthairs to expand the gene pool.

The elegant Russian is usually thought of as a blue cat only, but the Governing Council of the Cat Fancy (GCCF) also recognises this breed in white and black.

Although there is no definitive history of the origins of the breed, it has certainly been known about for at least the last 150 years and did, in fact, appear at a show held at the Crystal Palace, London in 1875.  Until 1912, when it was given its own class, it competed in a class including all other blue cats.

It is generally accepted that the Russian Blue is a naturally occurring breed that originated from the Archangel Isles in northern Russia, and it is most likely that it arrived in England and northern Europe via ships travelling from that region. Many of the first Russian Blues were acquired from sailors, and it is documented that one, called Kola, was swapped for a leg of mutton in 1890 at the London Docks.

Development of the breed took place in England in the early years of the 20th century, but was inevitably interrupted by the advent of the Second World War. Lack of available cats after the war meant that out-crossing had to be undertaken, and this was usually to Siamese, although the influence of the Siamese pattern has now mostly been bred out. A breeder called Frances MacLeod registered a white kitten born in 1961 with the GCCF that was said to have come from a Russian boat, and its name was Arctic Chumvi. It was registered as AOV (Any Other Variety) Foreign Type.

During the 1960s, some limited out-crossing of Russian Blues to blue point Siamese and domestic short-haired cats took place, and Chumvi was also mated to a Russian Blue stud, Meadliam Lupun. This mating produced both white and blue kittens and, in a third litter, a black kitten also. This proved that Chumvi’s white coat masked her true colour of black and that she also carried the gene for dilution (blue). One of Chumvi’s sons, Arctic Sumairki, was mated to a Russian Blue female called Harvees Amanda Too, and a daughter from this litter, called Osmunda, was registered as a Russian White in 1968.

Frances MacLeod eventually relocated to Australia, where she continued to breed Russian cats. In due course, Russian Whites and Russian Blacks were accepted by Australian cat registering bodies, and also in South Africa. However, two major registering bodies, the Cat Fanciers’ Association (United States) and the International Feline Federation (Europe) does not recognise any colour other than blue in the Russian breed.

Most breeders and judges of Russian cats would say that its defining feature is its coat, which is a double coat with a very dense undercoat that stands away from the body. The texture is soft and very different from any other breed.

The Russian is a medium to large cat of elegant foreign type, but is not exaggerated. Its ears are large and pointed, wide at the base and set vertically on the head. The eyes are almond shaped and should be a vivid green. The face has an angled profile and prominent whisker pads which lend the face a gentle expression.

It is a medium to large sized cat, but should appear graceful at all times. A Cobby or heavy build is undesirable. It stands on long legs and small, oval-shaped paws with a moderately long, tapering tail.

In the blue variety, the colour should be clear, even, medium blue throughout the coat with a distinct silvery sheen. The nose leather and paw pads should also be blue. The black variety should be jet black with a high, glossy shine and be sound in colour to the roots. The white variety should be pure white with no yellow tinge, and in certain lights the coat will appear to ‘sparkle’.  Like other white varieties of cat, white kittens may have a coloured spot or cap at the top of their head, but this usually disappears by their first birthday. 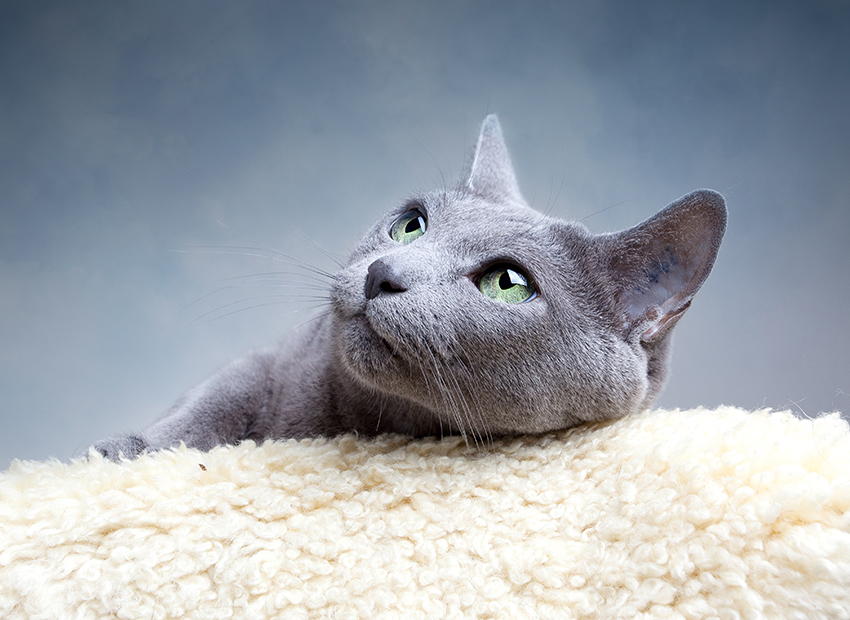 Intelligent and gentle, the Russian is an affectionate but undemanding companion. They are usually devoted to their owners and this makes them especially suitable for older people or those living alone. They are quietly vocal and happy to be with their human companions, tolerant of children and other family pets. For those who are at work during the day, your Russian will stay contentedly at home, and be happy to greet you and spend time with you when you arrive back.

Russian Blues have featured in literature and films. The 2001 Warner Brothers film ‘Cats & Dogs’ depicts the relationship between the two species in which both sides use tactics akin to those used in human espionage. It features a Russian Blue, playing a baddy. In the 2004 film ‘Garfield The Movie,’ the fat, loveable ginger cat’s girlfriend, Arlene, is depicted as a Russian Blue and voiced by American actress Debra Messing.

Finding a Russian Blue kitten shouldn't be too difficult as there are now quite a few breeders in the country. Expect to pay between £400 and £500 for a pet kitten depending on location and make sure your kitten looks well and healthy with bright eyes, a shiny coat and mite-free ears. 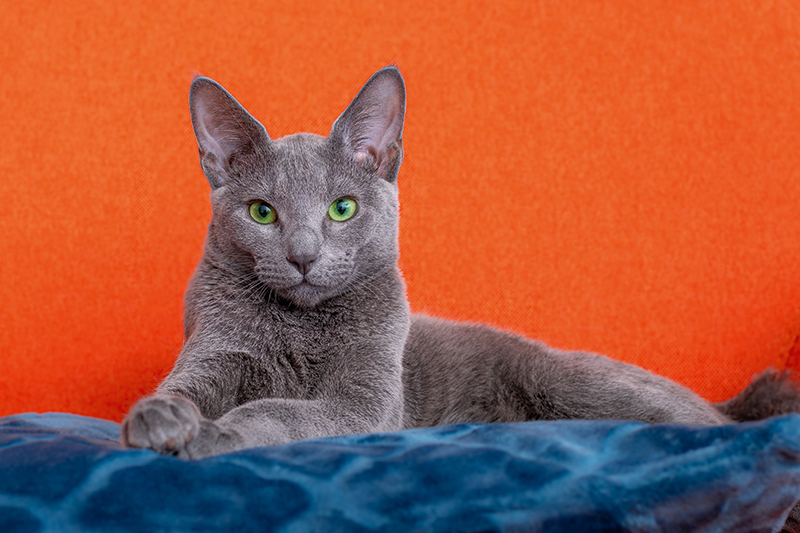 The Russian Blue is one of the more robust breeds in the fancy and they aren't known to suffer from any recurring health conditions.They also are one of the most low maintenance breeds in terms of grooming as their lovely thick fur rarely knots, and excessive grooming can take the thickness out of the coat, leaving it looking flat. A good brushing once a week is enough to keep them looking their glamorous best. Remember to keep an eye on their eyes and ears as well.

Russians are low maintenance cats and tend to keep themselves looking immaculate.  However, loose hair should be carefully combed out and to enhance the silky sheen, the coat can be buffed with a chamois leather or silk scarf. Be careful not to overgroom which will remove some of the plushiness from the coat and make it appear flat.

The large ears should be inspected once a week, and carefully cleaned with damp cotton wool if they are greasy.

The Russian is generally a very healthy breed and no major genetic problems have been reported. They are quite long lived, often living well into their late teens. Males are typically larger than females and an average weight would be 8 – 15lbs (3.6kg —6.8kg) when fully grown.

In common with other white cats, White Russians registered with GCCF on the active register and used for breeding must have undergone a BAER (Brainstem Auditory Evoked Response) test to detect deafness. As Russian Whites have green eyes, the incidence of deafness is usually low.

If you have searched for Russian Blues online, you may have come across cats that look slightly different to the GCCF-standard felines in this feature - these are most likely Russian Blues that meet CFA and TICA standards, more often found across the rest of the world and thus slightly more expensive and tricky to get hold of in the UK.

Whilst the solely-shorthaired CFA and TICA Russian Blues are only available in blue and are more gracile than their GCCF cousins (females can reach 3.2kg while the boys barely tip the scales at up to 4.3kg), the differences extend to beyond just size.

Jeannine Parfitt of Wychwood Russian Blue Cats, the sole breeder of this standard in the UK, explains: "Their heads are a completely different shape - their eyes are rounder and their heads have a wider wedge shape, with their ears set further apart."

These Russian Blues differ in personalities too: they are more outgoing, inquisitive and accepting of newcomers, but this does make them more of a handful.

Jeannine adds: "They're very playful and love children, but they have no real focus on just one special person. They're funny little people and they're a fun breed to have. They just want to be with you all the time, but they're not destructive when you're out at work."