Temperament Bengals are friendly and affectionate, intelligent and lively; playful into adulthood

Colours brown spotted, brown marble and snow spotted Bengals can be shown at championship status with the Governing Council of the Cat Fancy (GCCF).

Although now considered a domestic breed, the Bengal was originally a hybrid, created in the early 1960s by Jean Mill (the founder of the breed) in the United States by crossing an Asian Leopard Cat, Prionailurus bengalensis bengalensis, with a domestic cat. The small and very beautiful Leopard Cat is similar in size to a domestic cat and is widely distributed throughout Asia. It is not an endangered species.

As well as domestic cats, other breeds used in the foundation of the Bengal include the Burmese, Egyptian Mau, Ocicat, Abyssinian, and American Shorthair. Jean Mill’s intended to breed a cat with the stunning markings of the Leopard Cat but, by selective breeding, to breed out the wild temperament to produce a variety that could live happily as a family pet.

Jean Mill’s project was not an easy one, as the males from a first generation cross (F1) are sterile, and males may have fertility issues in the second and third generations. The females from the original litters were, therefore, mated back to domestic cats. The first-generation cats could be problematic as domestic pets but, by the fourth generation, can be considered a domestic cat rather than a hybrid. The GCCF ceased registering F1 generation Bengals on June 1, 2002, and, from June 1, 2008, stopped registering F3 generation. 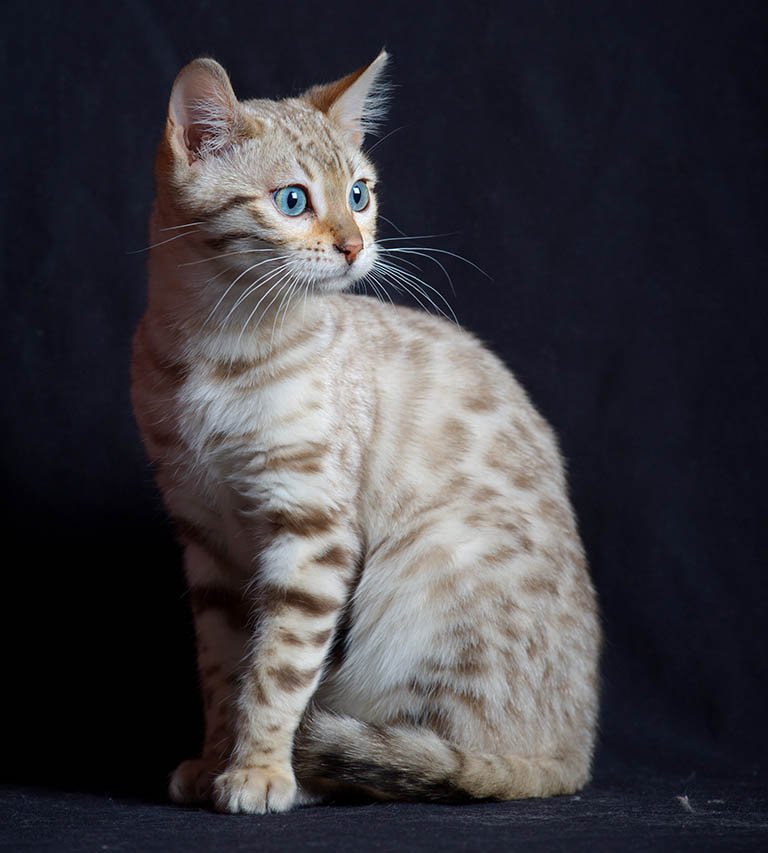 The shape and build of a Bengal is similar to its wild ancestor, with a broad head which is slightly longer than it is wide, with high cheekbones and medium-sized broad-based ears. The nose should be large and broad with a slightly puffed leather, and the muzzle broad and rounded with prominent whisker pads created by the widely set canine teeth.

Large oval eyes are set on a slight slant and may be deep shades of gold, green, or hazel, and include blue and blue-green in the case of the ‘Snow’ varieties (those carrying the Siamese, Burmese, or Tonkinese coat pattern or colour restriction).

The body is long, sleek, and muscular with strong legs — the hind legs being a little longer — and the paws large and rounded. The tail should be medium length and thick. The short, dense, plush coat should feel soft and very luxurious and is unlike the feel of any other cat coat. 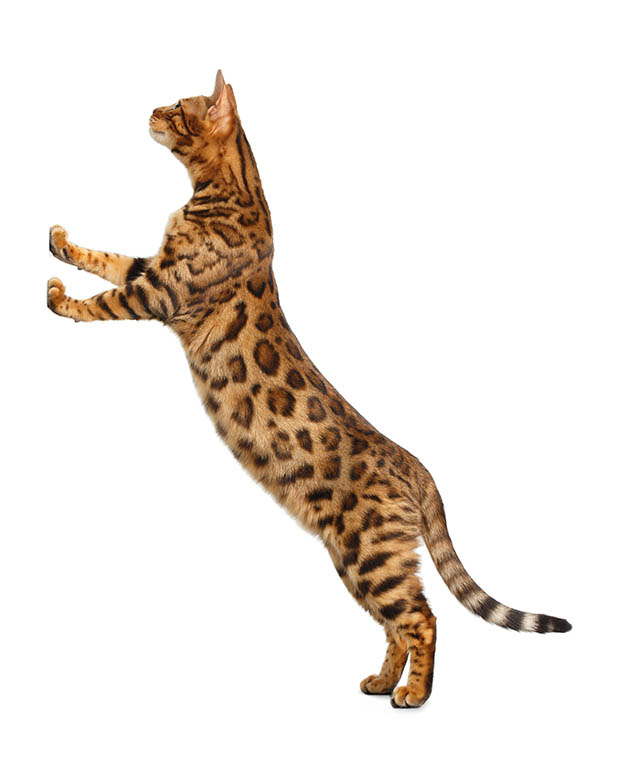 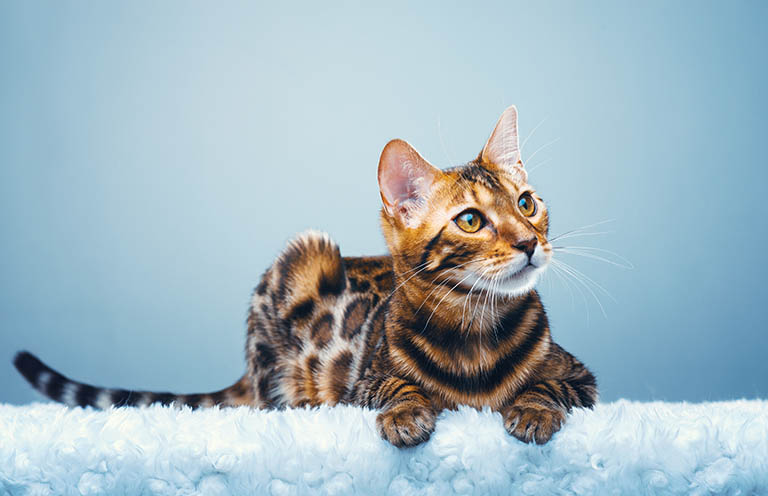 There’s no denying how striking these cats are.

Bengals come in two coat patterns — spotted and marbled. The face and head is dramatically patterned with ‘spectacles’ around the eyes, an ‘M’ on the forehead, and streaks and spots running over the head onto the shoulders.

In the spotted variety, the spots may vary in size and shape but should be large and well formed, distributed at random or in horizontal alignment. They may also consist of rosettes formed by a circle around a lighter centre. The spots should contrast well with the ground colour, giving a sharp outline to the spots. The legs may have broken horizontal lines and spots (sometimes right down to spotted toes), and the tail should have rings, streaks, and/or spots along its length, ending in a solid tip.

In the marbled variety, the body pattern shows swirled patches or streaks that are not symmetrical and give the impression of marble, and should not be similar to a normal classic or mackerel tabby. As with the spotted variety, the contrast of the markings with the ground colour should be well defined.

In the brown spotted and marbled varieties, the ground colour may be yellow, buff, golden, or orange with the marking colours varying from black to shades of brown. In the light, you can often see gold dusting or glittering in the coat.

The Bengal is a cat with personality plus! It is confident, active, curious, athletic, and energetic. It goes without saying that, given its background, it will need to be kept engaged and amused with toys and cat activity centres, including boxes, tunnels, and high-level shelves. Bengals also seem to like using cat exercise wheels (unlike some more lazy breeds).

It is not wise to let Bengals go out and roam free, but they can be trained to walk on a harness. It’s also widely reported that Bengals enjoy playing with water, not even seeming to mind if they get wet. They are very sociable and enjoy the company of their human family, and get on well with children and cat-friendly dogs. They are very vocal and can be quite strident, but this shouldn’t be confused with aggression. 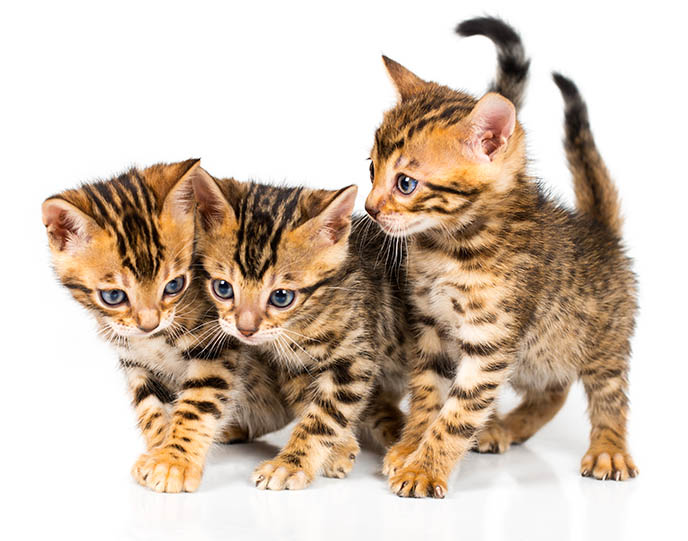 The Bengal is generally very healthy, with no breed-specific diseases or health problems relating to their conformation; they have the same susceptibility to infectious diseases as other cats.

From June 2016, all Bengals registered on the Active Register with the GCCF must have been genetically tested as normal for both PRA B (an issue in the eye) and PK Def (resulting in anaemia), or from parents or ancestors tested clear; so, if you are thinking of acquiring a Bengal kitten, ask the breeder if its parents have been tested.

They don’t require a special diet and are not fussy eaters — always follow the diet sheet given by the breeder with any new Bengal kitten. They require only minimal grooming by brushing once a week to remove any loose hair.