Be prepared as your life will never be the same again once you open your door - and your heart - to a Siamese! Owners and breeders of this loud and loveable breed cannot speak highly enough of them, and promise that while a Siamese will change your life, it will certainly be for the better.

Ross Davis of the Siamese Cat Association simply adores these graceful beauties: "They are more intelligent than most other breeds - they are very outgoing and friendly and love human company. They're very doglike and will even play fetch with you!"

Niki Hill of the Siamese Cat Club agrees: "There is no doubt that Siamese are very vocal and individual, often displaying idiosyncrasies which can be funny, endearing and very naughty. If you like your cats to be loyal, loving and sometimes challenging, a Siamese may be for you."

While Siamese are very affectionate lap cats who enjoy having cuddles, they are also one of the liveliest (and nosiest) breeds. They can open doors, drawers and even windows as Ross once found, and he has taken to putting child locks on his cupboards to keep out inquisitive Siamese noses!

Niki adds: "Siamese are not cats for everyone but if you want an active, determined cat with a distinctive yowl and conversation you may be ready to lose your heart to a Siamese, but remember once you fall for a Siamese it can be a life time obsession!"

All Siamese are 'pointed', which means that they have colour on their faces, tails and legs, while the rest of their body is cream or white. While the seal-point is the most well-known pattern in the Siamese, there are now more than 34 different colours and patterns in the breed, including chocolate, blue and lilac points, caramel, red, cinnamon and fawn, as well as tortie and tabby.

They are famous for their beautiful blue eyes and large, bat-like ears, with long, lithe bodies and thin, whip-like tails with soft shorthaired coats. Old Fashioned or Traditional Siamese cats have more rounded faces than their modern counterparts and have shorter bodies. Many breeders are devoted to keeping the old look going.

In the past, some Siamese were prone to having lymphosarcoma, a common cat cancer, and Progressive retinal atrophy (PRA) was also detected in earlier lines. But breeders have worked hard over the years to screen their cats from these diseases.

While they may be a high maintenance breed to keep up with, to compensate they have a very low maintenance grooming routine with just hand groom needed to keep their shorthaired coats smooth.

Niki says: "Siamese have an ill-founded reputation for being delicate in constitution and in need of special food. Nowadays we know that Siamese do best on simple, good cat food, and in fact they are often better on the less rich brands." 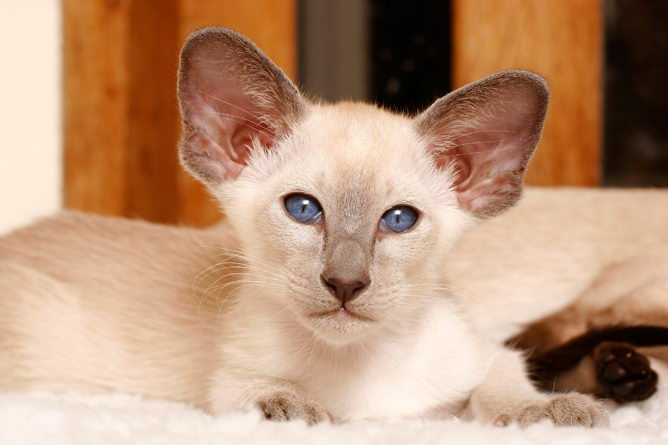 The Siamese is one of the oldest breeds in the fancy, and there are several myths and legends about them. It is believed that the cats belonged to the Royal Family of Siam and were used as guards of the ancient temples.

Siamese originate from Thailand and a British diplomat working there in the 1800s discovered the cat. In 1884 the departing British Consul, General Gould, was given a Siamese as a leaving present and the cat's kittens were were shown by his sister at the 17th Chelsea Palace Show in 1885. At that time there were four main colours - seal, chocolate, blue and lilac point - and over the years breeders have introduced many other colours.

Siamese kittens Kittens vary in price depending on the part of the country, but on average you can expect to pay between £350 and £500. Most breeders specialise in specific types and colours of Siamese and you may have to travel if you are after a specific colour.

Ross advises buying from a registered breeder and make sure you visit them in their home: "Look for outgoing, friendly kittens that show no signs of illness. Never buy a kitten that is not well. The breeder should complete any treatment before the kitten leaves home."

Named after their country of origin, Siam (renamed Thailand in 1939), the Siamese cat has always exuded an aura of mystery.

They are a natural breed and cats with their distinctive pointed pattern of dark mask, ears, legs, and tail contrasting with a paler body, and with deep blue eyes, have been known for centuries and are derived from the Thai or Wichien Maat, an old cat breed. They are described and illustrated in the ‘Tamra Maew’ book of cat poems, written between the 14th and 18th centuries, copies of which are still kept in the National Library of Thailand.

The first Siamese cats to arrive in the UK were brought back by the British Consul-General in Bangkok, Edward Blencowe Gould, as a gift for his sister, Lilian, in 1884. They were a breeding pair named Pho and Mia. They duly produced a litter of three kittens in 1885 which were shown, along with their parents, at the Crystal Palace Show. Sadly, shortly after the show, all three kittens died. In 1886, another pair of Siamese, together with their kittens, were imported to the UK by Eva Forestier Walker,and her sister, Ada. The distinctive look of these cats was very different to the native shorthair and longhair cats that were familiar to the British, and they were originally called the ‘Royal Cat of Siam’ — although, there is no evidence that they were kept by Siamese royalty. Further imports arrived over the ensuing years and most of today’s Siamese are descended from around 11 of the original imports. Lilian Gould, the recipient of the very first pair of Siamese cats, went on to co-found the Siamese Cat Club in 1901. The first Siamese cat to become a Champion in the UK in 1898 was Wankee, born in Hong Kong in 1895.

The modern Siamese cat that you will see at a show looks rather different to its original ancestors from Thailand. The original cats were medium-sized with long bodies and moderately wedge-shaped heads and comparatively large-sized ears. As Siamese became increasingly popular in the middle of the 20th century, a more slender version was favoured, and today the standard describes the breed as beautifully balanced with head, ears, and neck carried on a long svelte body, supported on fine legs and feet, with a long, tapering tail in proportion. The head is long and well proportioned with width between the ears, narrowing in perfectly straight lines to a fine muzzle, a straight profile, and strong chin. The ears are large and wide at the base, and set to follow the lines of the wedge-shaped head. The eyes, a deep, brilliant blue, which are one of the great beauties of the Siamese, must be Oriental in shape and slant towards the nose. The points — mask, ears, feet ,and tail — should show a clearly defined colour that matches on all points, and there should be a clear contrast between the points and body colour. The coat is very short and fine in texture, and should be glossy and close lying.

The cats originally arriving in the UK were seal point, but occasionally other colours: blue, chocolate, and lilac were born. Siamese kittens are born light cream or white and the point colours start to develop after a week or two. Siamese have a genetic mutation, similar to albinism, which affects enzymes that control the colour of the fur. Areas of the body that are cooler allow the enzymes to function and they develop more pigmentation, making them darker. In cold climates, the Siamese cat’s fur will be darker on its body than a cat living in a warm climate.  Today, Siamese come in 32 colours and points patterns — the solid points colours are: seal, blue, chocolate, lilac, cinnamon, caramel, fawn, apricot, red, and cream. There are also tabby points in the same colours, tortie points, and tortie tabby points.

The original Siamese had eye squints and tail kinks which are now considered serious faults. Siamese have been known to ingest non-edible items, such as woollen garments and plastic. This is known as pica but the reason for this is not understood. Progressive retinal atrophy (PRA) has been identified in the breed, as has systemic amyloidosis.

The Siamese has a personality as distinctive as its looks. Affectionate and intelligent, they are extroverts and bond strongly with their human family. They are active cats, sometimes described as dog-like, and will enjoy interactive play with you. They can be extremely vocal with quite a loud voice. Because they are social creatures, they can suffer from separation anxiety if left alone for long periods, and it is often a good idea if you are thinking of acquiring a Siamese to consider a pair to keep each other company, although they will get up to double mischief! They will live happily with a family dog and older children.

Remember! All breed profiles are general and every cat is individual.