Temperament Home loving, friendly and affectionate, intelligent, lively; playful into adulthood, and good with children and other animals

Colours Numerous colours and patterns are available, including red, black, cream, tabbies, torties, black and white, chocolate, lilac, cinnamon, fawn?and caramel, plus dilutes (creams, blues), silvers and smokes. The Siamese-style pattern is known as the Si-Rex, and there are also van-patterned Cornish with markings similar to the Turkish Van

Grooming A hand groom will help remove any loose hairs

This distinctive cat, with a silky soft coat is very affectionate and loves human company. Could the Cornish Rex be the cat for you?

Some cat breeds are very ancient, with their origins traced back centuries, but the Cornish Rex can be traced definitively to the mid 20th century. The very first Cornish Rex kitten appeared in a litter of non-pedigree kittens, born on a farm in a small village on Bodmin Moor in Cornwall on 21 July 1950.

A tortie and white shorthair female called Serena, belonging to Mrs Nina Ennismore and Miss Winifred Macalister, gave birth to a litter of five kittens, four of the kittens were typical, normal-coated, short-haired farm kittens; but the fifth, a cream male, had an unusual fine, curled, and wavy coat. As he developed and grew, he was obviously very different from his littermates in shape, with a slender body and long legs, a narrow head, large ears, and a long, whippy tail. He was named Kallibunker and is the original Cornish Rex.

The sire of Kallibunker and his siblings is unknown, but is likely to have been Serena’s litter brother ‘Ginger’, a short-haired red tabby. The Cornish Rex is the result of a spontaneous natural mutation and the gene is inherited recessively, so it was most likely to appear when two closely related cats bred together.

By a quirk of fate, Mrs Ennismore had bred and exhibited rex rabbits, and when Kallibunker was taken to be neutered, Mrs Ennismore’s vet realised Kallibunker was a significant cat, and advised her to contact the geneticist, AC Jude. At Dr Jude’s suggestion, Kallibunker was bred back to his mother, who produced two further curly coated kittens and one straight-coated kitten, including a male named Poldhu (a fertile blue tortie), who, in turn, sired a blue female called Lamorna Cove, who went to the US to establish the breed there.

The first curly kittens that were produced as a result of close matings were then bred with Burmese, Siamese, and domestic shorthair cats, resulting in a broad genetic base for the breed. Further test matings between Kallibunker’s offspring confirmed two curly coated cats would produce only curly kittens. 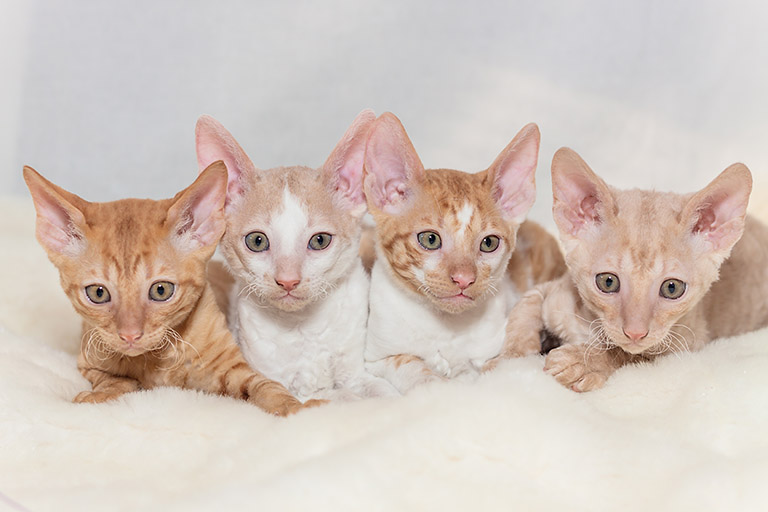 All colours are acceptable in the breed.

The Standard of Points for the Cornish Rex describes an elegant, foreign-type cat, medium-sized, with long, slender legs, and small oval paws, looking as if they are standing on tiptoe.

The Cornish head is a medium wedge, egg-shaped, with gentle lines, and high cheekbones, narrowing to a gently rounded muzzle, and firm chin. Their ears are very distinctive; large and ‘mussel shell-shaped’, with rounded tips, set rather high, but not vertically.

Their eyes are oval-shaped and medium in size, with the top line set almost straight, with a slight slant to the outer edge of the ear; any eye colour is acceptable in the standard. The neck should be elegant and the body slender, hard and muscular, and the tail long, fine, and tapering. Although slender, they feel surprisingly heavy when picked up.

The coat is very distinctive; short, dense, and silky, without guard hairs, and should have neat, even, and well-defined waves (sometimes described as Marcel waves), especially over the back, sides, and tail; coats are at their best once the cat is fully mature. The whiskers and eyebrows will also be crinkled.

There are no points for colour for the Cornish Rex; all are acceptable, including self-coloured (solid), tortoiseshell, tabby (with or without white), smoke, and pointed. 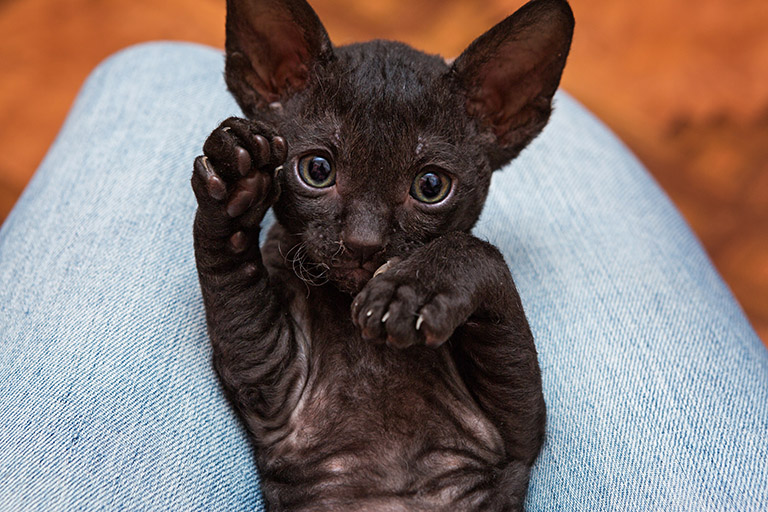 These cats love a cuddle and a lap to sit on.

The Cornish Rex is a high-activity level breed, with their muscular hind legs enabling them to run very fast and jump high. They are fun-loving and require space to play, including vertically. 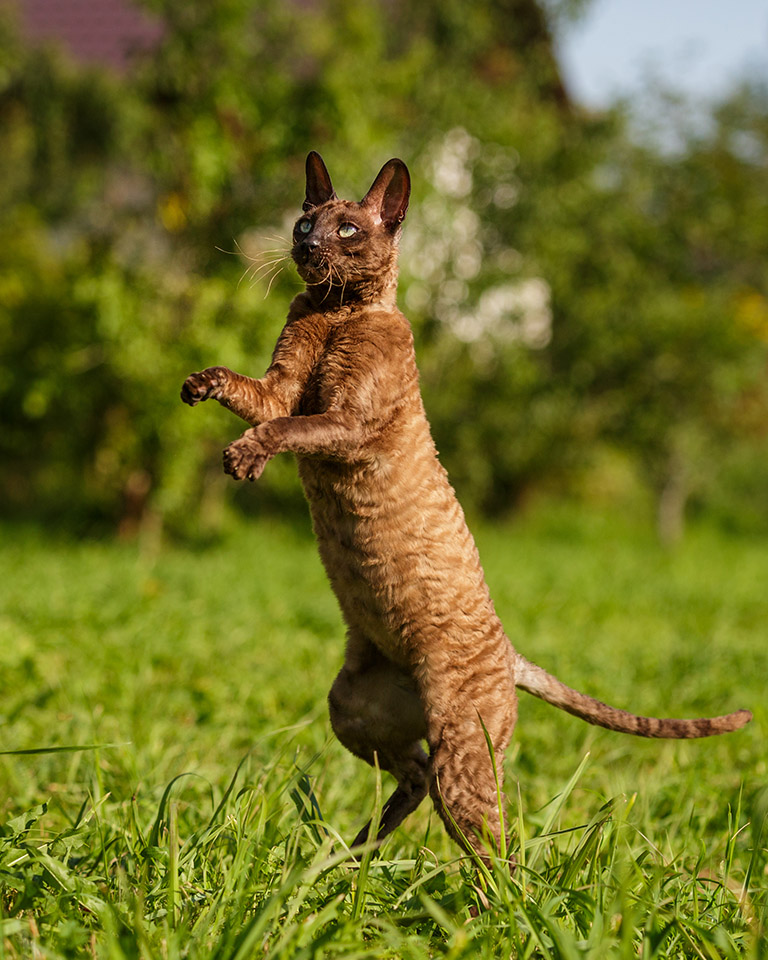 They have an endearing personality, are extremely affectionate, and make wonderful companions; bonding with and positively seeking the companionship of their human family.  They are a good choice for families with children or other pets, and they enjoy a snuggle and a lap to sit on.

They are intelligent, curious, and tolerant. They are not particularly vocal, but communicate with their eyes and their body language, and make excellent therapy cats. 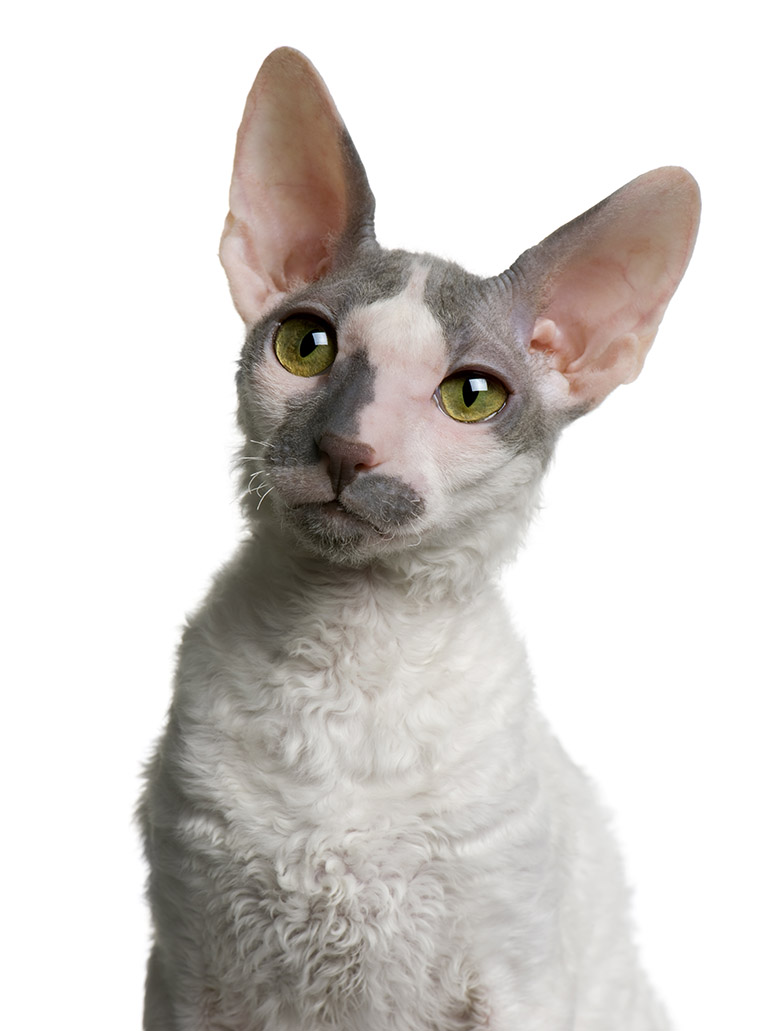 White cats may require sun protection in the warmer months.

They are generally a very hardy and long-lived breed, and don’t require a lot of special care, but should not be allowed to go out in the rain because they can become saturated due to the lack of guard hairs in their coat.

They do moult and, contrary to some reports, they are not hypoallergenic. A gentle hand grooming is all their coat requires to keep it in good condition, although they do tend to have greasy ears and toes.

They have very good appetites, and care should be taken to ensure they don’t overfeed and become too plump.

White cats and cats with white ears, may require sun protection in the summer months if they are allowed outside. Their body temperature is the same as that of any other cat, but because of their light coat they feel especially warm to the touch.

If you want to breed your Cornish Rex, the recommendation of the Rex Breed Advisory Committee is to blood type test your cat as Cornish Rex can have either blood type A or B, and the cats should be compatible to avoid problems with fading kittens.

The lifespan for a Cornish Rex is around 16-plus years, although it is not unusual for them to live up to 20 years. They remain playful and energetic well into old age.