Temperament Devon Rex cats are home loving, friendly and affectionate, intelligent, loyal and devoted, playful into adulthood, good with children and other pets

Colours Can be bred in any colour or colour combination, with or without white markings, so the choice is endless

Grooming Apart from regular ear cleaning, they don't need to be groomed

863eb1ed-90a5-469e-b6ee-bdd773c4860d
Devon Rex cat breed information and advice. Cheeky and charming, the Devon Rex loves to be part of the family. Could it be the breed for you?
Content continues after advertisements

Nature can produce some odd coincidences and the appearance of the first Devon Rex is one such.

Last month, we featured the Cornish Rex breed, a natural mutation that first appeared on Bodmin Moor in 1950.

A few years later, on July 15, 1959, the first Devon Rex kitten was born to a non-pedigree mother. He was black smoke in colour and the only curly coated kitten in the litter. His sire was assumed to be a large black cat, with ringlets hanging from his tail, that lived in a local tin mine. This unusual kitten was adopted by Miss Beryl Cox and Miss Margaret Croll of Buckfastleigh, Devon, and was named Kirlee.

As Cornwall and Devon are adjoining counties, it was assumed that Kirlee arose from the same mutation as the Cornish Rex. Consequently, Kirlee was purchased by the well-known judge and breeder, Mr Brian Sterling-Webb, and was mated to two Cornish Rex variant (normal coated, carrying the Cornish Rex gene) queens. The resulting normal short and semi-longhaired-coated kittens raised the suspicion that Kirlee was the result of a different gene. In 1961, Kirlee was mated to a full Cornish Rex queen, Broughton Purly Queen, who went on to deliver a litter of normal-coated kittens. This proved that Kirlee was, indeed, the result of a separate and incompatible mutation.

The two Rex mutations were then developed independently; the Cornish Rex being known as gene 1, and the Devons as gene 2. The Devon Rex was recognised by the Governing Council of the Cat Fancy (GCCF) in 1967, and reached the United States in 1968. In 1972, the American Cat Fanciers Association (ACFA) recognised the breed and it also became eligible for ACFA championship. In 1983, the Cat Fanciers’ Association (CFA) recognised the Devon Rex for championship status. 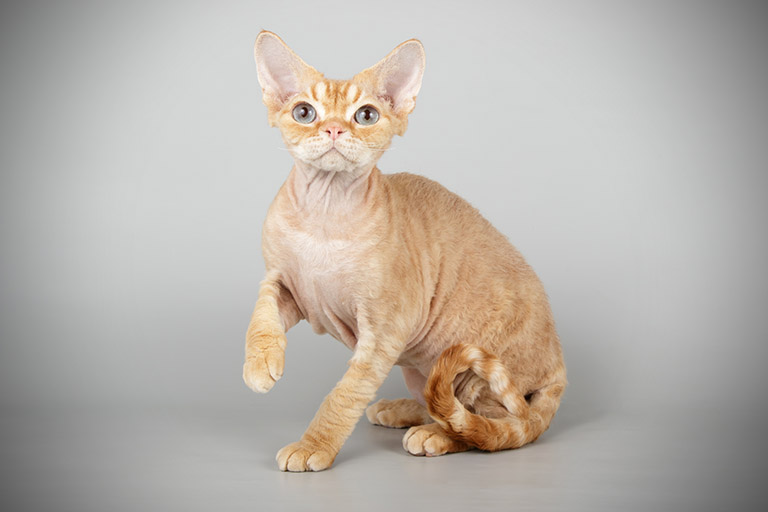 The appearance of the Devon Rex is like no other breed. It’s sometimes called the pixie of the Cat Fancy. The head is formed by a short, broad wedge with high cheekbones. Their ears are large and wide at the base, and set low on the head. Their eyes, which can be any colour, are large and oval-shaped, with what is sometimes described as an ‘impish’ expression.

A slender neck leads to a muscular body of medium length, with a broad chest, and they look as though they are standing on tiptoe with slim legs and small oval paws. The tail should be long and tapering. The coat, which is waved or rippled, should be short, dense and soft, and an even length on the body. The coat on the head and neck, over the shoulders, and on the legs and paws is sometimes too short to be waved.

Cats have three types of hair: guard hair, awn hair, and down hair; the Devon Rex coat is unusual because there is little guard hair. The whiskers and eyebrows are crinkled, and may sometimes be stubbly. All colours and patterns are recognised. The coat may vary over the life of the cat; kittens may drop their coat during development and adult coats can change seasonally. The coat looks its best at full maturity, from 18 months of age onwards. 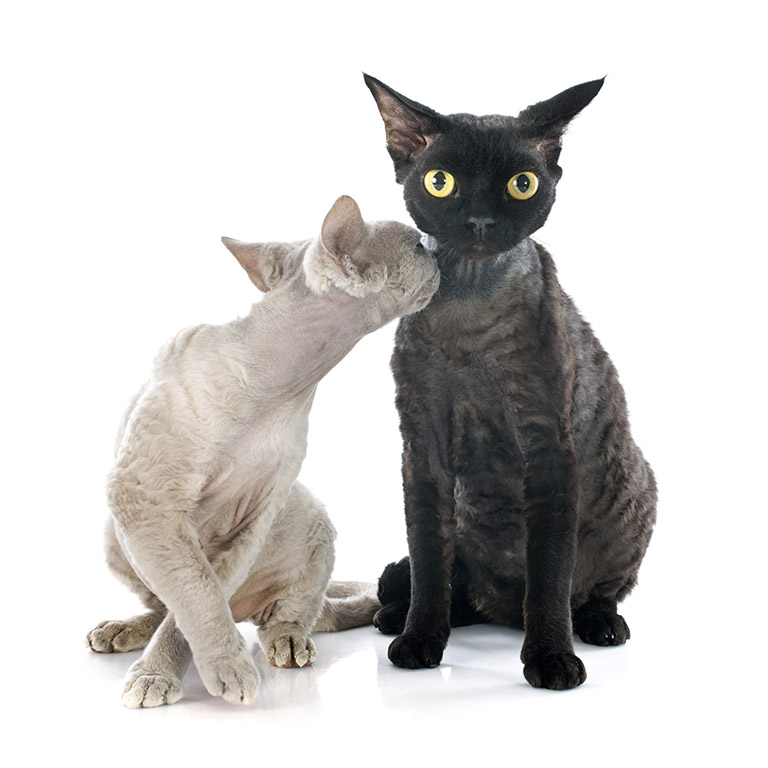 All colours are recognised.

Although not a large breed, the Devon Rex has a huge personality. They are extremely playful, active, and fun loving — they will keep you amused with their antics. They are inquisitive and interested in everything around them, so can get into mischief, especially if left alone for long periods when they can get bored.

A word of caution, they are greedy and inclined to pinch food if they can, even off your dinner plate — they are so quick and clever that a piece of chicken will disappear before you can say knife! They are powerful jumpers so will easily access the top of kitchen cupboards or doors.

Devons are intelligent and can learn tricks and enjoy games with their human or feline companions. Very people orientated, they enjoy being part of the human family and like being on a lap or cuddled under your duvet at night. They thrive in an active household with plenty of company — they’re great with children and happy to share their home with other family pets.

Be aware that mischievousness is all part of the Devon charm! 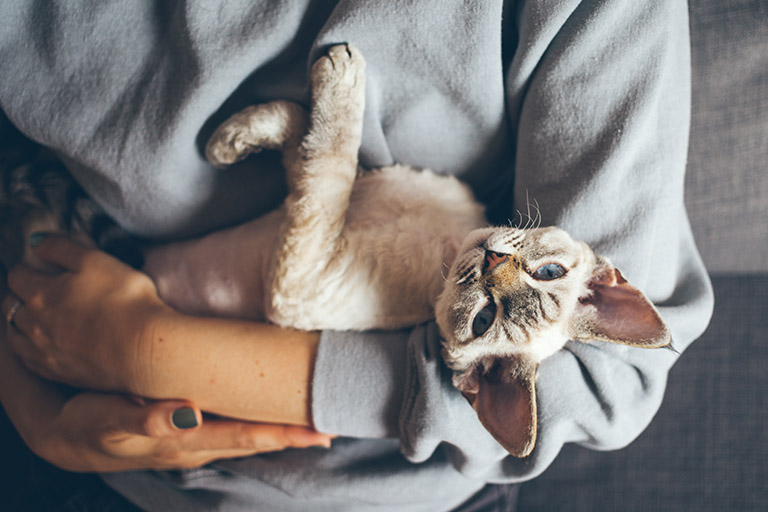 They thrive with human company.

Devon Rex are generally a very healthy breed, but the limited gene pool in the past led to the development of an inherited muscle disease called Devon Rex myopathy or spasticity. This is a recessive gene trait meaning a cat can be: affected (has two copies of the abnormal gene), a carrier (with one abnormal gene so does not suffer, but can pass the faulty gene on) or clear (with no copies of the mutated gene). A DNA test is available, so getting a kitten from a breeder who screens their breeding stock will make it almost certain your cat will not be affected.

Luxating patellar, where the patella (kneecap) dislocates or moves out of its normal location, appears more common in the breed. The lifespan of the Devon Rex is 10–15 years, but most will live into their mid-teens.

Devons are muscular cats, weighing 6-9lbs, with the males being larger than the females.  They are low maintenance with their wavy coats needing just a light hand groom, so as not to damage the delicate coat.

They feel very warm to the touch; their body temperature is the same as any other cat, but their short, fine coat does not provide much insulation. Devons enjoy warm surroundings so may make the airing cupboard or a sunny window ledge their favourite spot. Their ears may be prone to being greasy so will require regular cleaning, and cats with paler coat colours may require sun block on their ears in the summer months.