Cats were an integral part of life for ancient Egyptians and spotted cats, very similar in appearance to today’s Egyptian Maus, were depicted in their art as far back as three thousand years ago. The Egyptian goddess Bastet, also called Bast, was worshipped in the form of a lioness and later a cat. The word ‘Mau’ is Egyptian for cat.

Unfortunately, there is little information about the breeding of pedigree Egyptian cats in Europe before the Second World War. Although, they were bred in France, Italy, and Switzerland in the early 20th century, presumably from cats imported from Egypt and the Middle East. A French publication of 1940, ‘Nos Amis Les Chats’, describes an Egyptian foreign shorthair as a tall, slim cat with a modified long head and resilient coat with a spotted tabby pattern; which is not dissimilar to the standard for today’s Egyptian Mau. Similar to many other pedigree cat breeds, the number of Egyptian Maus was severely depleted after the Second World War.

The survival of the modern-day Egyptian Mau is thanks to an exiled Russian Princess, Nathalie Troubetskoy. In the early 1950s, while living in Rome, Troubetskoy acquired a silver spotted female kitten from a young boy who had been given it by a diplomat working at one of the Middle East embassies. Struck by its appearance, Troubetskoy researched the kitten’s origins, and concluded that it was an Egyptian Mau.

Determined to save the breed, she set about acquiring more cats and obtained Gregorio, a black male, and Lulu, a silver spotted female. Using diplomatic contacts, Troubetskoy imported more cats from the Middle East, including a black smoke male, Geppa. The first litters from these cats were born in Italy in 1953 and 1954.

In 1956, Troubetskoy emigrated to the United States, taking three of her Maus with her and registered her cattery name of Fatima. Traditional Maus trace their ancestry back to two of these foundation cats, a silver female called Fatima Baba (bred from Geppa and Lulu) and her bronze son, Fatima Jojo (sired by Gregorio). The Egyptian Mau gradually gained popularity in the USA, and they were granted championship status with the Cat Fanciers’ Association in 1977.

In the UK, it was a rather different story. There was an attempt to create Egyptian Maus using Siamese, but they looked very different from traditional Maus. To avoid confusion, these oriental type cats are now called Oriental Spotted Tabbies. The first traditional Maus were brought to the UK by Dr Melissa Bateson in 1998. The breed name Egyptian Mau was approved by the Governing Council of the Cat Fancy (GCCF) in January 1999, with championship status being granted in 2006.  They are still a relatively rare breed, with less than 70 being registered by the Governing Council of the Cat Fancy in 2019. 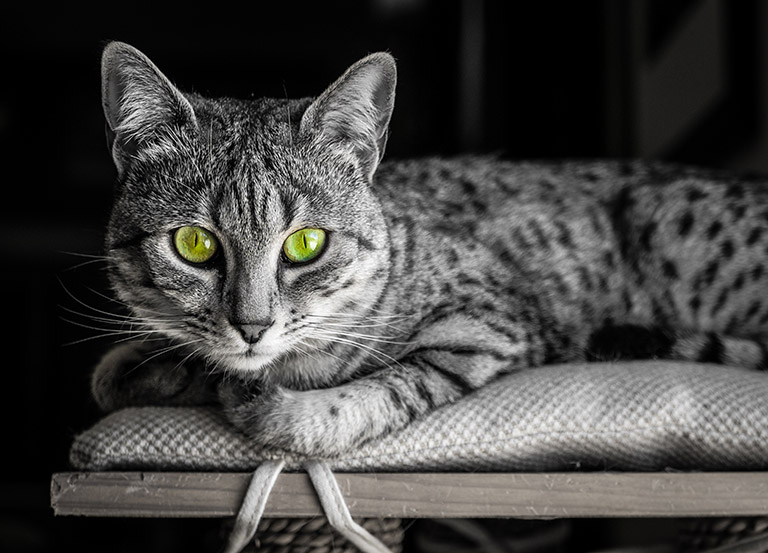 They have beautiful eyes.

The standard for the Egyptian Mau describes an elegant cat of moderate foreign type with a unique “worried” look. This facial expression is generated by large, gooseberry-green eyes shaped like large rounded almonds, set beneath a level brow, either side of the parallel lines of the nose. The head is a slightly-rounded wedge of medium length with flowing muzzle lines. The ears are medium to moderately large and are broad based, set well back on the head and cupped forward and alert.

The Mau is a graceful, medium-sized cat with strength and a hard, muscular feel to its body. It has elegant proportional limbs and small dainty paws almost round in shape. The tail should be medium length, moderately thick at the base and taper slightly to the tip.

The GCCF standard allocates 40 points (out of 100) for the coat pattern and colour, emphasising its importance.  The Egyptian Mau is recognised in three colours for show purposes with the GCCF:

● Bronze: Warm, coppery brown ground colour with the underside fading to a paler tone. The markings are dark brown or black with paler roots, showing good contrast against the ground colour.

● Silver: Pale silver ground colour with the underside fading to a brilliant pale, silvery white. The markings are black or charcoal grey with pale silver roots, showing good contrast against the ground colour.

Colours not accepted for showing with GCCF include solid black, or dilute (blue). Classic Tabby Maus can also sometimes occur but cannot be shown or bred from, but do, of course, make lovely pets. 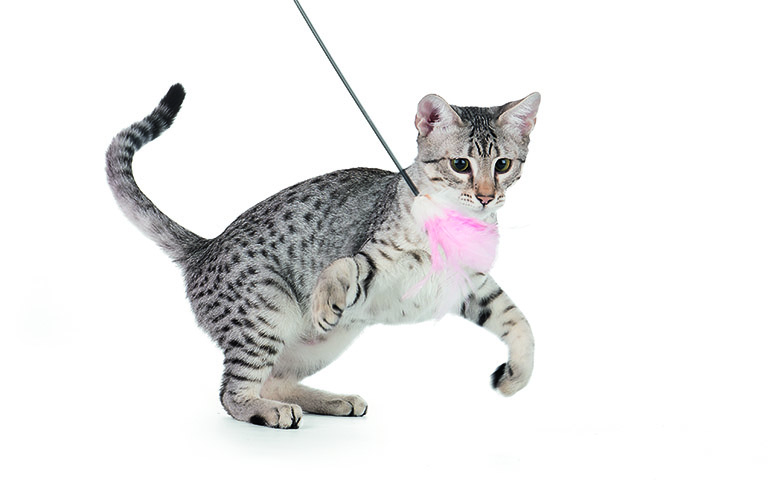 A Mau will love to play with you.

The Mau makes a wonderful pet. They are energetic and athletic, and love to climb, play, and chase toys — often learning to retrieve toys which are thrown for them. They will enjoy a high activity centre on to which they can jump.

Reflective of the Mau’s naturally playful nature, some in the breed will also have an unusual enjoyment of water and will happily put their head under taps. If given access to a safe environment, the Mau will also enjoy the outdoors.

To go with their active instincts, the Mau also has a gentle and loving side too. Intelligent and communicative, they thrive on human affection and company, relishing the attention of owners. 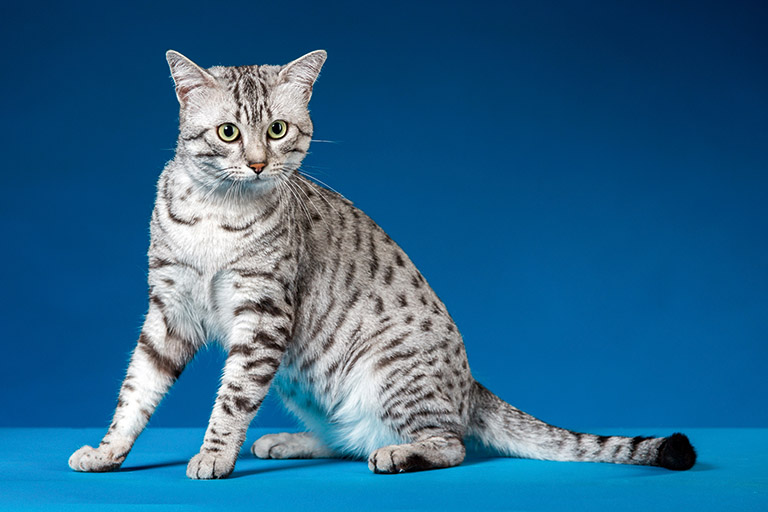 The Mau is still quite rare in the UK. 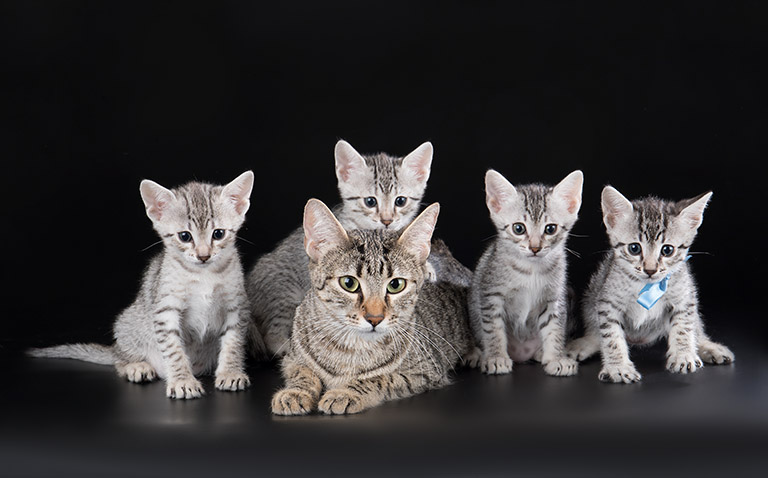 The average weight of a Mau is 7–9 lbs, and they are low maintenance from the point of  view of grooming.

Pyruvate kinase (PK) deficiency is a hereditary disease which has been identified in the breed. This is a lack of an enzyme in the red blood cells which helps to produce energy for the cells to survive. The deficiency can lead to anaemia, which can lead to symptoms of lethargy and lack of appetite, or, at very worst, can be more rapid and life threatening.

Fortunately, there is a simple DNA test for this condition which breeders can use as a tool to avoid breeding carriers together. The disease is a recessive gene trait, meaning a cat needs to inherit two faulty genes to be affected. Veterinary laboratories provide the test on blood samples or cheek swabs.

In general, the Egyptian Mau is a healthy breed.