The rare and beautiful Korat is known as Si-Sawat (which means greyish-blue) in its native country of Thailand. Its name comes from the Korat province in the northern part of the country.

The breed is considered a symbol of good fortune, and is the national cat of Thailand. It is still associated with ceremonies to bring vital rain to the rice crop; Korats are paraded around villages in the north east of the country and sprinkled with water to ensure the paddies are filled with water. A Korat was a traditional gift at a Thai wedding, to bring good luck and fertility to the newlyweds, and was never sold but only ever presented as a gift.

The history of the Korat can be traced back centuries; the earliest record appearing in ‘The Cat-Book of Poems’ or ‘Smud Khoi of Cats’, produced between 1350 and 1767. The book presents the seventeen ‘good luck’ cats of Thailand, including the Korat, and is presently located at the National Library in Bangkok. The pictures and poems in the book show that the Korat has changed little since the original illustrations which record their almost 700-year history.

The first Korats to arrive in the west were a pair of cats called Nara and Darra. They were imported into the United States in 1959, and were given by a breeder in Bangkok to Jean Johnson of the Cedar Glen cattery. Because of Korats’ mixed backgrounds (including Siamese and Thong Daeng), the offspring were named according to their colour by their Thai breeders, so it would be possible to have Siamese, copper, and Korat kittens in one litter.

Nara and Darra were mated to imported Thai Siamese in the US, but only the blue offspring were registered as Korat. The Korat Cat Fanciers’ Association was formed in 1965 in the US by a group of owners and breeders to protect the development of the Korat and produce a breed standard of points. It was accepted for Championship status by the Cat Fanciers’ Association in 1966.

The first Korats to arrive in the UK were Brandywood Saeng Duan, Samelko Sahm, and Saang Jahn’s Tee Rahk, who were imported in 1972. Korats were granted Championship status by the Governing Council of the Cat Fancy in 1984. 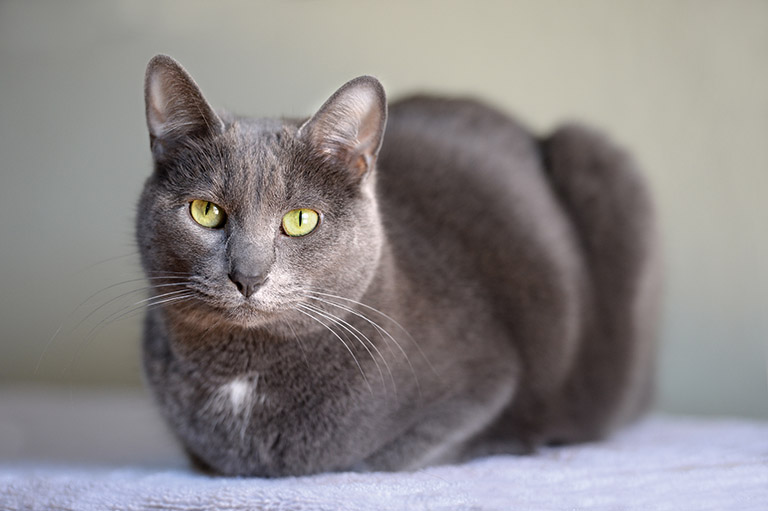 Korats have a distinctive look.

The Korat is a foreign-type cat, medium in size and should be firm, lithe, muscular, and unusually heavy for its size, weighing around 6 — 10lbs.

They are quite slow to mature, reaching full physical development at around four years of age. When viewed from the front, the Korat has a heart-shaped head; its large ears are round tipped, wide at the base, and set high on the head.

The eyes of the Korat are one of its distinctive features; they should be oversized for the face and round when fully opened — with a slant when closed or partially closed — and brilliant green in colour.  The eyes of a Korat have been described “as sparkling as the dew drops on a lotus leaf.”

The muzzle should be well developed, neither pointed nor square. The nose is short with a slight downward curve and a slight stop when viewed in profile. The females are smaller and more dainty than the males, which should be medium boned and powerful. The limbs should be well proportioned and the paws oval. The tail is medium in length, thicker at the base and tapering to a rounded tip.

The coat is single, with the hair short to medium in length, glossy and fine, and lying close to the body. The coat may be any shade of blue all over, and must be tipped with silver — the more silver tipping the better, without shading or tabby markings. Korat kittens have the silver-blue colour from birth; the silver tipping continues to develop throughout kittenhood and adolescence to achieve full intensity at around two years of age. Kittens may have ghost tabby markings, but these disappear with maturity.  The fine single coat requires very little grooming, apart from occasional combing to remove dead hairs.  The nose leather, lips, and paw pads range from dark blue to lavender. 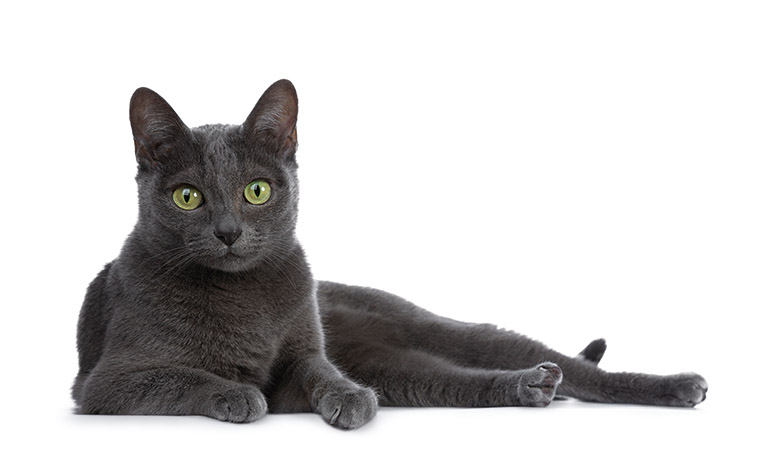 They have brilliant green eyes.

There is no doubt that the Korat is a very intelligent breed. They form strong bonds with their human family and thrive on companionship and affection — they do not like to be left alone or ignored, and will follow you around.

Korats can be possessive with their toys and stubborn with their likes and dislikes, but they are generally placid cats and prefer a quiet environment. Having said that, they are athletic and enjoy playtime, so should be provided with toys and areas for climbing. When they have worn themselves out, they will seek you out for a restful lap and some bonding time. They are comfortable with respectful children and enjoy playing and learning tricks.

Like other cats of Asian origin, they prefer cats of the same breed. They will get along with other cats and with dogs, but expect to be top of the pecking order. However, they enjoy company so it is possible they will form close friendships with other family pets. 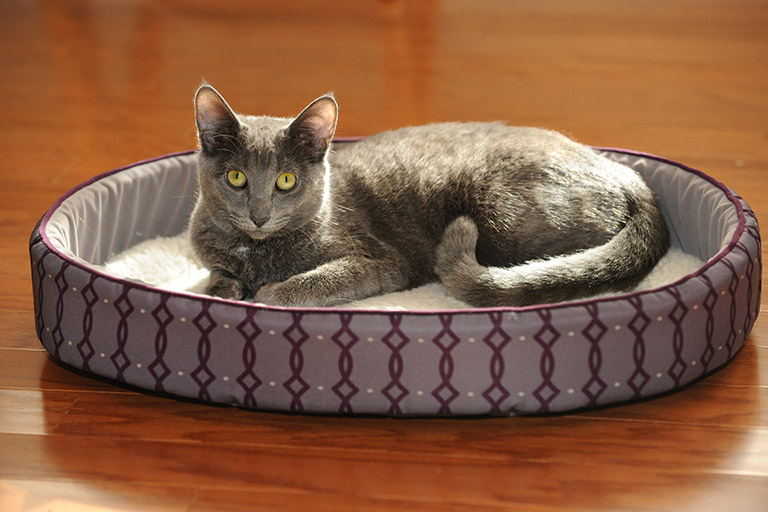 Korats are generally a very healthy and long-lived breed, often reaching their late teens. They were the first breed to be DNA screened for two forms of a genetic disease: GM1 and GM2 gangliosidosis.  This disease is when cats lack particular enzymes that are necessary for the proper functioning of the nervous system and usually kills cats before their first birthday. All UK lines were tested in 1998 and found to be clear. From that time, all GCCF registered Korats will have been tested or have parents known to be clear, before they are registered.

Korats typically have a low percentage of body fat, so vets should take this into account when determining how much and what type of anaesthesia is to be given when a Korat is undergoing any type of surgery.