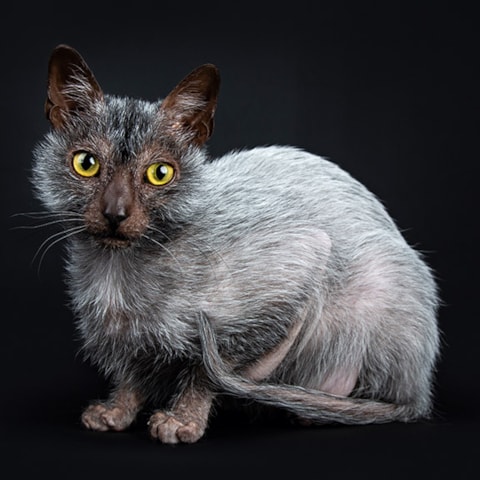 Temperament The Lykoi is usually good with everyone and can be very affectionate towards them.

Grooming Lykoi do require some maintenance such as occasional bathing to remove excess oil from the skin and ears.

It isn’t often that a completely new, natural breed of cat is recognised, but on February 26, 2020, the Governing Council of the Cat Fancy (GCCF) Council of Delegates gave Preliminary Recognition to the Lykoi breed. Here’s what you need to know about the newest breed on the block…

The name Lykoi comes from the Greek word ‘lykos’, meaning wolf, and the breed is sometimes referred to as the werewolf cat. This alludes to its appearance as the skin around the cat’s eyes, nose, muzzle, and chin is hairless, giving the appearance of a mask. Lykoi cats are also partially hairless on their legs and paws as well, which means the cat looks like the popular image of a werewolf.

The Lykoi is a natural mutation that occurred randomly in the feral feline population. It was discovered relatively recently when in 2010, Patti Thomas in Virginia, USA, was given a litter of two kittens from a normal black domestic shorthair. It was thought from their appearance, that they may be a possible Sphynx mutation. The kittens were named Silver Lining and Ray of Hope.  The kittens and their mother were given to veterinarian, Dr Johnny Gobble and his wife, Brittney, of Vonore, Tennessee. DNA testing by Dr Leslie Lyons at the University of California proved that the gene responsible for their partial hairlessness and unique (in the cat world) ‘roan’ patterned coat — meaning having a base coloured coat, such as black or red, interspersed with white hairs — is a recessive gene, and not related to any other known hairless mutations, such as the Sphynx.

At the same time, dermatologists at the University of Tennessee undertook a variety of tests to rule out the possibility that the unusual hair growth patterns were a result of disease or infection. In another of the quirks of fate that occasionally happen, a second pair of kittens appeared in 2010 in Tennessee and these too went to live with the Gobble family. As the foundation cats were shown to be healthy, two of the unrelated cats were mated, and produced the first intentionally bred Lykoi, with the first kittens arriving on September 14, 2011. Since breeding began with the first foundation cats, an outcrossing programme was undertaken by Dr Gobble, using solid black domestic cats. Natural mutation Lykoi have also been located in other areas of the USA and Canada.

The first Lykoi variants — normal-coated cats carrying the Lykoi gene — to be exported to the UK were brought into the country by Mrs Perviz Alexander in 2013, with the first full Lykoi in the UK born in May 2015.

Once the breed name had been agreed, Dr Gobble asked The International Cat Association (TICA) in 2012 to have the Lykoi listed as an experimental breed (for registration only); it was subsequently granted championship status in May 2017. The Cat Fanciers Association accepted Lykoi for showing as Miscellaneous Status from May 2018. 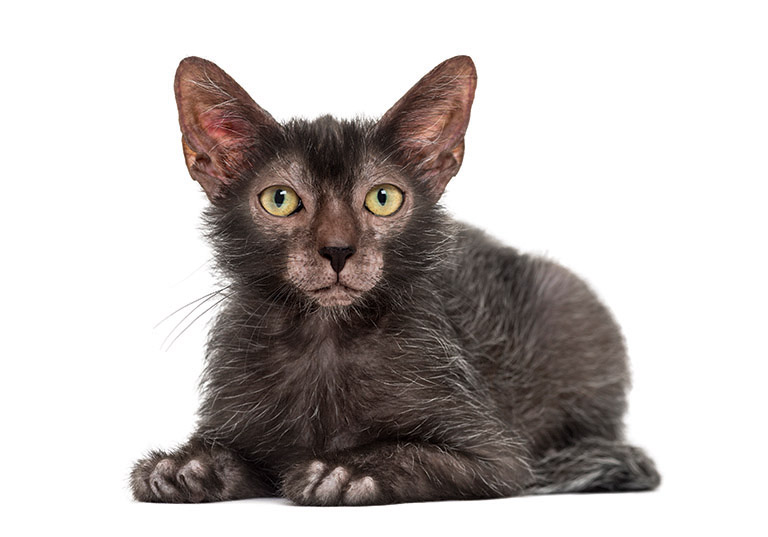 The Lykoi is a healthy breed

The Lykoi is striking and rather fascinating. It is a partially hairless breed of cat with a unique coat.
A combination of three distinct traits sets the Lykoi apart from all other breeds:

● Roaning — a pattern of intermixed white and coloured guard hairs. This pattern is found in other animals, such as horses, but has not been found in any other breed of cat.

● A lack of undercoat.

● Sparse hair on legs, feet, and face mask which gives the appearance of a werewolf.

The head of a Lykoi should be a modified wedge with rounded contours, slightly longer than wide.  The ears are tall and open at the base, set high on the head, vertical and erect. The eyes are large, walnut shaped, and slant upwards — hairless rims are desirable. The nose is hairless and leathery to the touch and gives the impression of a mask when connecting with the area around the eyes. The muzzle is medium in length with fleshy,gently-rounded hairless whisker pads with a definite whisker break.

They have an elegant,foreign-type body and should feel muscular. The legs are medium length and sparsely haired, the paws are oval shaped with long toes. The tail is shorter than the body and tapers to a point.

The coat is what sets the Lykoi apart; undercoat should be lacking over the entire body. Guard hairs cover the body, but are very sparse or completely lacking on the legs, feet, back of ears, and mask (eyes, nose, muzzle, and chin.) Lykoi have a grizzled appearance due to the amelanistic guard hairs intermixed with coloured. The texture is soft to the touch and the length short to medium; longer guard hairs cover the body with the coat coverage varying depending on the cycle of hair growth. Coloured hairs and amelanistic white hairs are intermixed throughout the coat, with each hair either coloured or white, from root to tip. The accepted range of coloured hair percentage is 30 — 70 per cent, with 50 per cent being ideal. The roan pattern will vary in appearance depending on the colour (black is probably the most striking). It is the unique pattern of reduced hair and roan pigmentation that gives their faces the characteristic look. 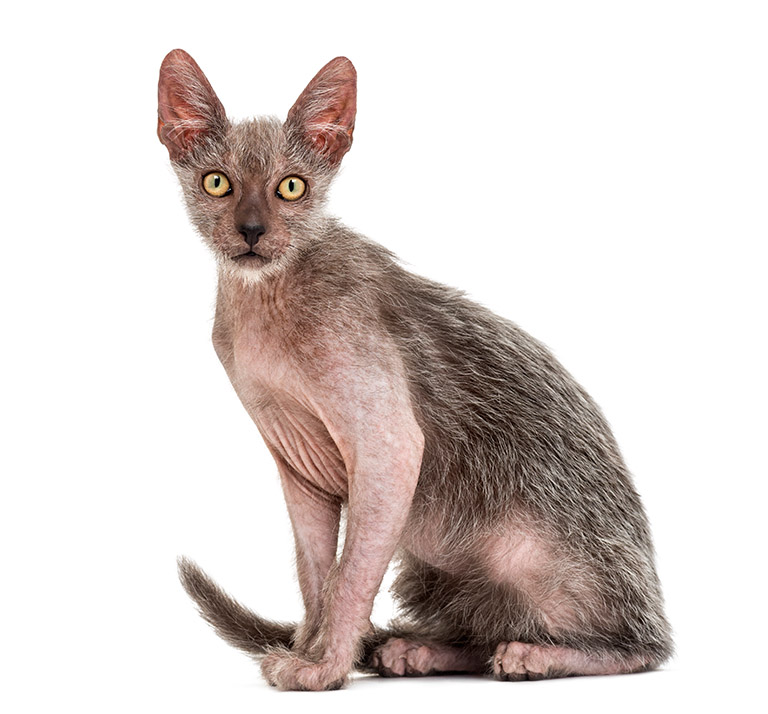 Said to be very dog-like, Lykoi are friendly, affectionate, extrovert, and active. They are intelligent and enjoy toys that enable them to use their problem-solving skills and high prey drive.  They bond well with humans, making them ideal for a family with children, as well as other cats.

Lykoi are happy to play hunt and fetch and if they are kept together, it is said they will hunt down their toys like a little pack of wolves. After all the games though, Lykoi will have burned off their energy and, being naturally affectionate, will enjoy a spot in the sun or a cosy lap to snooze on. 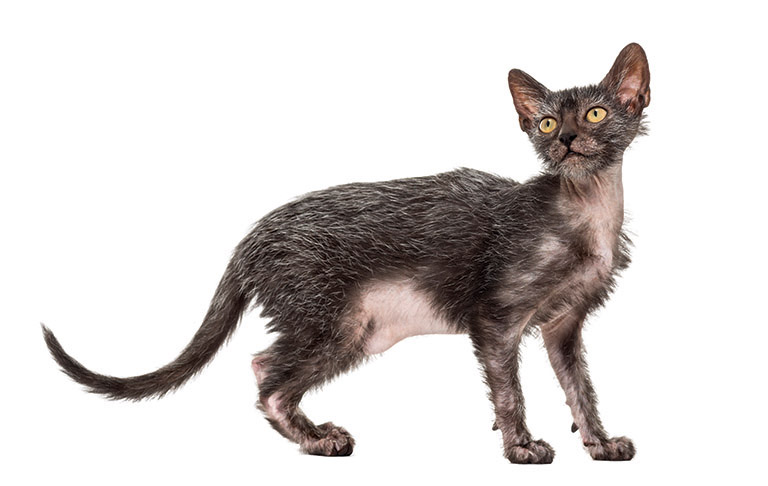 The breed comes from a natural genetic mutation.

The Lykoi does not have an undercoat and, therefore, coat care will be minimal — a light brushing once a week will be sufficient, plus the usual check on eyes, ears, and claws to check if they need clipping. They can moult some or all of their coat, making them appear more naked than usual; this is quite normal for Lykoi cats, and the coat will grow back again later.

Thanks to the careful selection and testing of foundation cats by the original breeders, Lykoi
are a robust and healthy breed, with no known breed–specific health issues. The breeding policy allows for outcrossing to domestic cats, ensuring the continuation of a diverse gene pool.