The Isle of Man is situated in the Irish Sea, between England and Ireland, and has a history of habitation dating back 11,000 years. The island abounds with legend and folklore, including stories about the island’s native cat, the Manx, and its defining feature of the lack of a tail.

One legend has it that the cat was late for the sailing of Noah’s Ark and was separated from its tail by the closing doors. Another that it is the result of cross breeding between cats and rabbits. There are several versions of
a legend blaming invading Vikings or Irish soldiers for the missing tail; these intruders were said to kill cats believing their tails to be lucky charms, so feline mothers bit off their kittens’ tails to save them.

It is not known for sure when the breed arrived on the Isle of Man. Small, isolated populations of tailless cats are also found in other parts of Europe, including Denmark and Crimea. Although, whether they are genetically related to Manx cats (Manx have always been highly favoured as ships’ cats and so could have visited foreign shores) or are simply a similar result of insular genetic diversity is unknown.

What is known for sure is that the Manx is an ancient natural breed, and its taillessness is caused by a mutation that probably originated among the island’s cat population and, being a dominant gene, it spread to other cats on the island. Manx were one of the first show cats, the first recorded exhibit appearing at Olympia in 1885, with the first breed standard published in 1903. It was also one of the first breeds recognised by the Cat Fanciers’ Association (CFA) when it was founded in 1906. 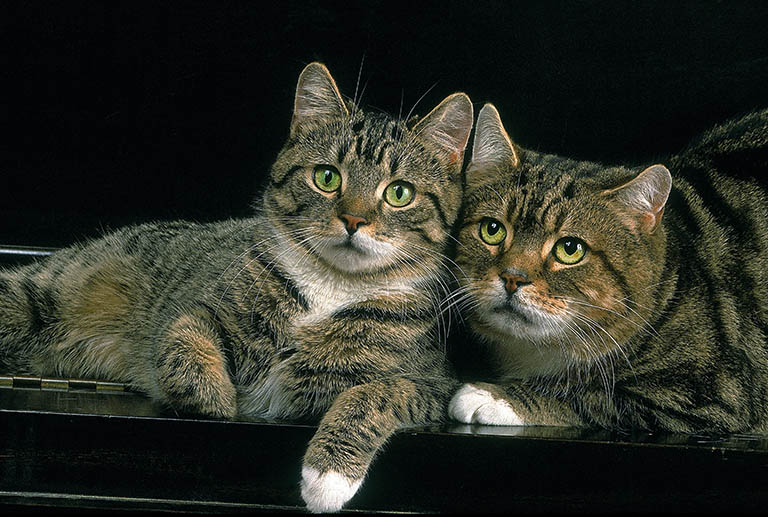 The Manx has a fairly round, large head with prominent cheeks. The nose should be broad and medium length with a gentle dip from the forehead to nose. The muzzle should be strong and there should be a definite whisker break, and the chin should be firm and the bite level.

The ears are fairly tall, set rather high on the head and angled slightly outwards so that they are gently flared. The eyes are large and round and set obliquely, with the colour in keeping with the coat colour.

The body should be solid with breadth across the chest; the back should be short, but not overly shortened, as this may pose a greater risk of associated health defects. The flanks should be deep and the legs well-boned, with the back legs longer than the front with powerful, deep thighs.

A Manx should appear tailless, with a rounded rump with no substantial extension of tail bone or cartilage, although minor rises are permitted if these do not interfere with the roundness of the rump. The overall impression should be of balance for roundness of rump to back and hind leg length.

The Manx has a double coat and should appear well padded, with the quality arising from a short, very thick undercoat and slightly longer overcoat. The double quality of the coat is of more importance than the colour or markings. All colours and patterns are acceptable with the exception of colourpointed (Himalayan/Siamese colour restriction), chocolate or cinnamon, and their dilute derivatives, lilac or fawn. 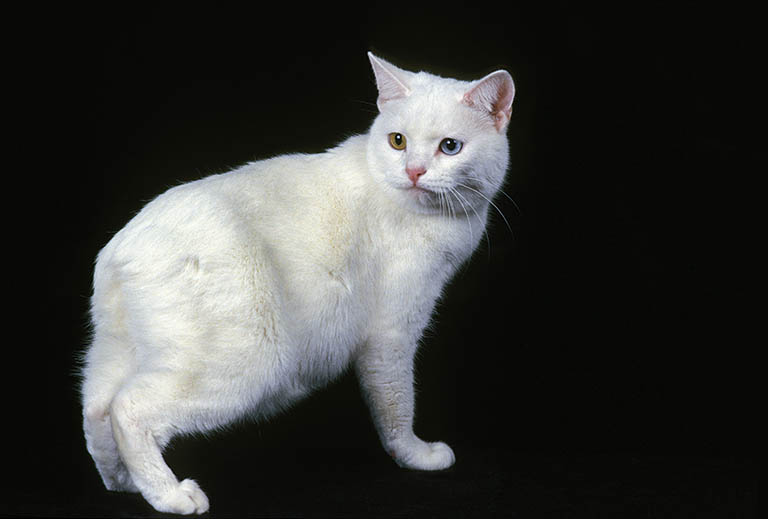 Manx are well-known for having no tail.

As a family pet, the Manx is playful and intelligent, bonding well with their human family. Their powerful hind quarters means that they can jump to great heights, accelerate quickly, and turn sharply. They are not as territorial as other cats and will actively avoid conflict.

They are sometimes referred to as ‘dog-like’ in both their loyalty to their human companions and their love of interactive play. They are generally laidback individuals, and happy to be part of a family with children and other
pets. Although, they can be shy with strangers.

They are noted as great hunters — a legacy of their working origins — so if allowed outdoor access, you will probably be presented with ‘gifts’ in the form of mice, voles, or birds — so it is worth considering a catio for your Manx friend! 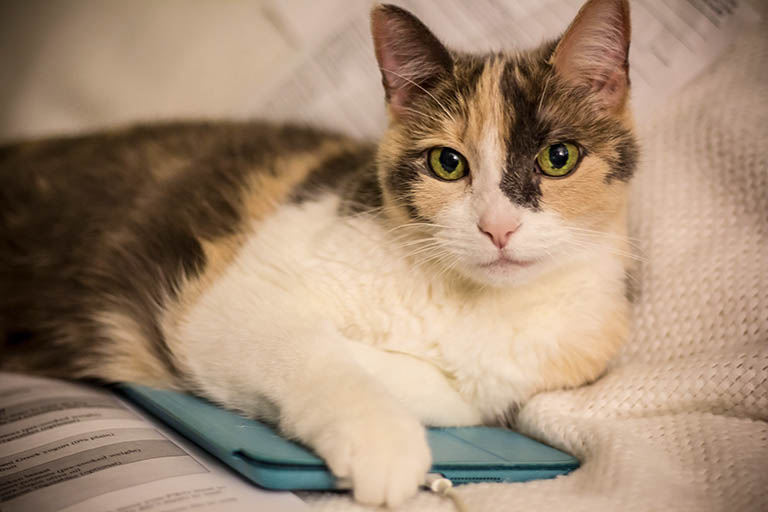 The Manx enjoys being part of the family.

The Manx can suffer with health issues. The Manx gene can overshorten the spine which can result in many negative side effects including: weak hind legs and difficulty in walking, damage to the spinal cord, and defects in supply of nerves with associated problems with the bowels, bladder, and digestion. Breeders must scrutinise kittens and adults closely for any of these defects and this information used in determining ongoing breeding practices. Any adults displaying any of the above symptoms must not be used for breeding.

Breeding from tailed Manx and minimising mating of two Manx with shorter than average backs, can help minimise these adverse occurrences in Manx breeding. The GCCF registration policy for Manx requires that breeding cats must be given a health screening by a veterinary practitioner and certified free of any overt physical or health defects, such as intestinal or neurological defects. So if you’re looking to get a Manx kitten, be sure to ask in detail about this and see the evidence — a good breeder will be more than happy to discuss it.