Temperament Nebelungs are intelligent and affectionate but shy of strangers

Sometimes referred to (incorrectly) as a semi-longhaired Russian Blue, the Nebelung is a completely separate breed — although it bears a close physical resemblance.

The development of the breed began in the early 1980s. The foundation was a short-haired black female belonging to the son of Cora Cobb, a computer programmer from Denver, Colorado; the cat was named Elsa. In August 1984, Elsa produced a litter of kittens, sired by a short-haired blue male. Both cats obviously carried the recessive longhair gene as one of the litter of six kittens was a blue longhair male.

Cora Cobb kept this kitten and named him Siegfried, after the German warrior character in the Wagner opera, the ‘Ring of the Nibelung’. The following year, Elsa produced another litter to the same male, this time producing a longhaired blue female who was duly named Brunhilde, after the Icelandic heroine queen of the opera.

Cora Cobb moved to El Paso, Texas in 1985 taking Siegfried and Brunhilde with her, and in 1986 the two siblings duly mated and produced a litter of three blue longhairs. Wishing to develop a breed from her cats, Cora Cobb took advice from the geneticist Dr Solveig Pflueger, who felt the breed was best described as a semi-longhaired Russian Blue. She named the breed Nebelung, which in German means ‘creature of the mist’, and wrote a standard based on that of the Russian Blue, with the only difference being the hair length. Russian Blue breeders in The International Cat Association (TICA) objected to this, and the standard was revised to describe a unique breed resembling blue-grey cats that had been imported from Russia in the nineteenth and early twentieth centuries.

First appearing at a TICA show in Paris in 1989, the Nebelung was granted championship status by TICA in May 1997. Nebelungs are now recognised by several registration bodies around the world, and were first presented to the Governing Council of the Cat Fancy (GCCF) in the UK at a special exhibition at a Russian Blue Show in October 2011.

The Nebelung is still a rarity in the UK, with only six being registered with GCCF in 2019. 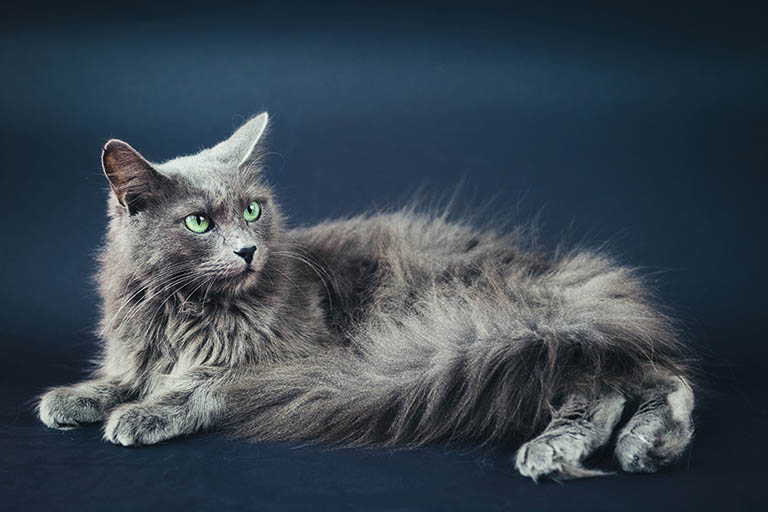 The Nebelung is one of the more recently recognised breeds.

The Nebelung is an elegant cat of foreign type with a semi-longhair coat which is soft and silky in texture and medium blue in colour with a silvery sheen.

The body should be long and medium to large in build with a firm, muscular feel. The legs should be long, slender, and elegant but not fine boned, with neat, rounded paws with generous tufting between the toes and the pads.

The tail is rather thick at the base and tapers, and should be well-furnished to form a brush, and it should be long enough to reach the shoulder blades.

The Nebelung’s head is a modified wedge with width at the eye level, and high, broad cheekbones. The ears are as wide at the base as they are tall, and appear pointed. The eyes are rather large, almond shaped, and set wide apart. The eye colour in adults should be green, as vivid as possible, although eye colour can be yellow in kittens. A Nebelung should have a soft and gentle expression.

In profile, the nose has such a shallow concave curve that it appears virtually straight; there must be no stop, break, or nose bump; the tip of the chin should line up with the tip of the nose. The chin should be strong and deep, the bite level, and the whisker pads prominent. The neck should be long and slender; it may seem heavier than it actually is because of the density of the small ruff.

The lovely coat is semi-long, with a fine undercoat covered with thicker guard hairs; it is dense but soft and silky to the touch. Males may have a more developed ruff than females. Breeches are desirable, as are ear tufts. Feathering behind the ears of a lighter shade of blue is desirable. The length of the coat and density of the undercoat can vary with the seasons and adult coats may take up to two years to fully develop. The colour should be an even, clear, medium blue, although kittens may show ghost tabby markings. The guard hairs should be tipped with silver giving the overall appearance of light silver dusting. The nose leather and paw pads should be blue, although pinkish lavender is acceptable in kittens. 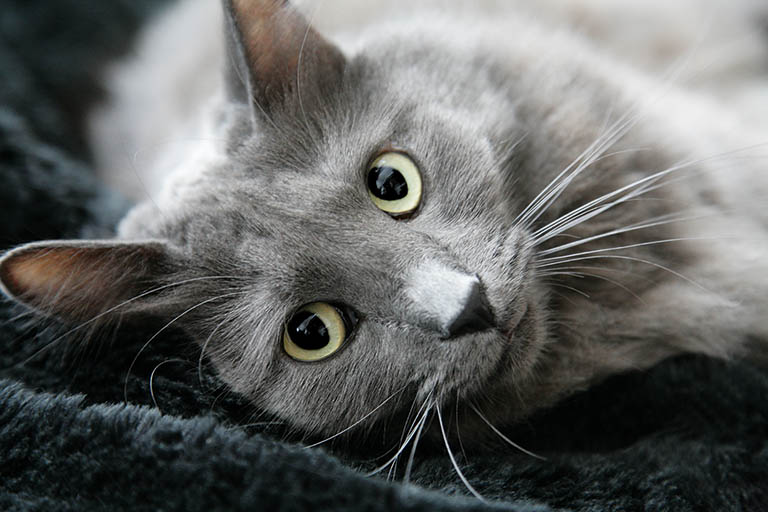 Nebelungs are noted for their affectionate, sweet temperament and soft voice. They can appear shy at first and may take a little while to fully settle, so they do need to be given time to allow them to explore and feel confident in new surroundings. Therefore, early socialisation is very important for this breed.

Once fully at home, they form strong bonds with their human families, enjoying their company and being fussed and petted, and interactive games, such as fetch. However, they can be shy around strangers.

They are a highly intelligent breed and quite energetic, so if living as indoor cats only, they will require space to explore and toys and activities to keep them amused and stimulated.  They don’t like being left alone for long periods, although they do enjoy their own space to relax. This good-natured breed will happily accept younger family members and cat-friendly dogs, and will soon become a much valued family member, wanting to spend time with you. 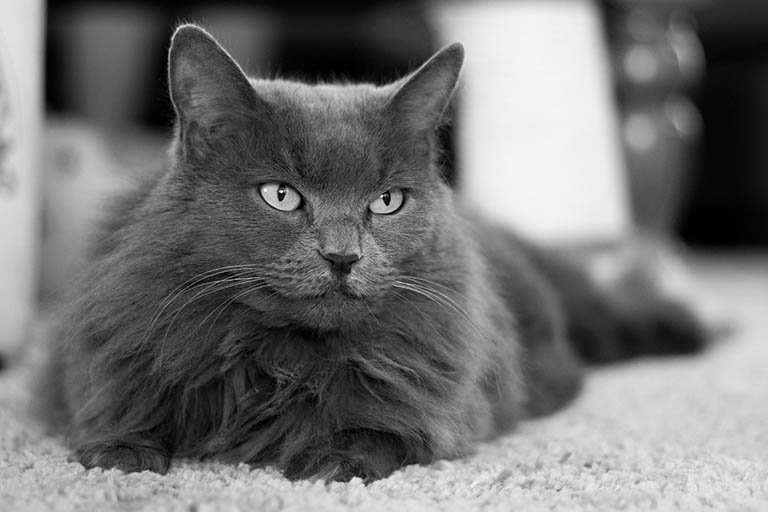 It is a rare breed.

The Nebelung is a healthy breed with no known breed related hereditary health issues.  Their life expectancy is 15 — 18 years.

The main issue is to ensure they do not become overweight, as they do enjoy their food, so their diet must be carefully managed. A Nebelung weighs between 8 – 16 lbs with the males being noticeably heavier than the females.

Although they have a semi-longhair coat, the texture is silky, and it is not onerous to maintain, and should be groomed weekly with a wide-toothed steel comb to ensure it doesn’t knot or mat. They will shed in the spring, and possibly autumn, when care must be taken to remove any old or dead coat.