Colours They are available in all colours

056f0210-ebed-4960-b4ab-9a6dd5078fed
Norwegian Forest cat breed information and advice. Norwegian Forests are a delight to have around too.
Content continues after advertisements 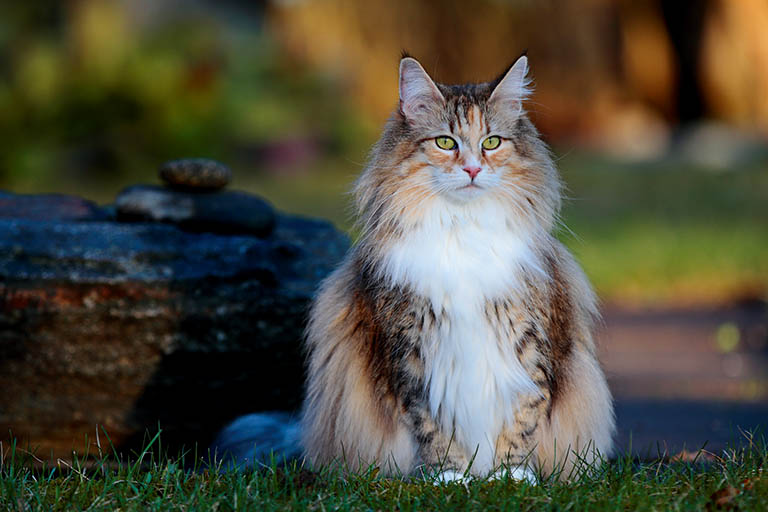 Affectionately known as ‘Wegies’, the Norwegian Forest Cat is an ancient, natural breed of domestic cat, originating in Norway. It is very likely that these cats travelled with Vikings to help keep their ships free of vermin, the same service they provided for human settlements in Norway. They are thought to have arrived on the east coast of North America with Norse explorer Leif Erickson in the late 900s.

The breed was almost lost over the centuries through hybridisation with free-roaming domestic shorthairs. By the early 20th century, the Norwegian Forest Cat was becoming a rarity in its homeland, and in 1938, Norwegian cat fanciers became interested in the breed and determined to save it from extinction. The Norwegian Forest Cat Club was formed in Oslo, but the Second World War put a temporary stop to their efforts.

In the 1950s, the late King Olaf V designated them the official cat of Norway. In the 1970s, the work was started again to protect the breed by the Norwegian Forest Cat Club by creating an official breeding programme.

The Norwegian Forest Cat was first registered as a breed by FIFe (Fédération International Féline) in 1976, thanks to the efforts of Norwegian cat fancier Carl-Fredrik Nordane. It was recognised as an official breed in Sweden in 1978, and gained championship status with Cat Fanciers’ Association in the United States in 1993, having been granted registration acceptance in 1987.

In the UK, the breed gained preliminary recognition with the Governing Councial of the Cat Fancy in 1989, with the first cats exhibited at the Supreme Show in May 1990, and the breed was finally granted championship status in 1997. 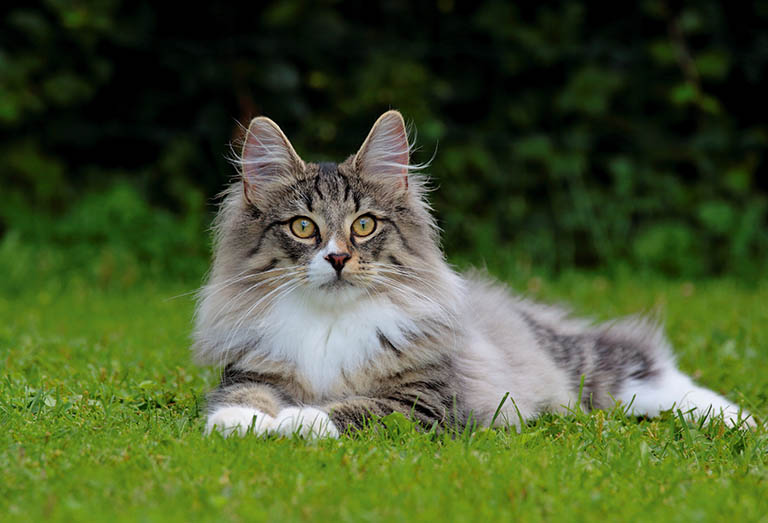 As you would expect from their origins as outdoor working cats in harsh weather conditions on Norwegian farms, their appearance reflects their heritage.

They are large and heavy boned, but still elegant. The head should be a good size and form an equilateral triangle, with a slightly rounded forehead. The profile should be long and straight from the tip of the nose to the brow without a break, and the chin should be firm.

They have large ears with lynx-like tufts at the tips and furnishings. They are wide at the base and should be placed high on the head so that the lines of the ears follow the line of the head down to the chin. The eyes are large and oval with an oblique set and an alert expression — all eye colours are allowed.

The body of a Norwegian Forest Cat should be big and well built, long and muscular with solid bone structure; the chest should be deep and the neck powerful. The cat should stand high on the leg, with back legs longer than the front legs; the paws are large and round with tufts of fur between the toes.

The long bushy tail should be well furnished and in length should reach at least to the shoulder blades and be in balance with the body size.

The coat is semi-long, with a dense woolly undercoat covered by a smooth, water-repellent overcoat consisting of long, coarser guard hairs covering the back, flanks, and tail.  When in full coat, a Norwegian will have a full ruff and knickerbockers, although a shorter coat is acceptable in the summer months. There are no points allocated for coat colour, but the following colours are not allowed: chocolate, lilac, apricot, caramel, cinnamon, fawn, and Siamese pattern. Any amount of white is allowed including on the paws, chest, underbody, or a blaze.

The breed was saved from possible extinction.

The Norwegian Forest Cat is generally a robust and healthy breed.

There is some anecdotal evidence that the breed is susceptible to Feline Urinary Syndrome (FUS) which can cause pain when urinating, and care should be taken with diet in this respect.

Glycogen storage disease type IV is an inherited disorder of the breed, and affected kittens are stillborn or die shortly after birth, although they may develop normally until four or five months of age. The disorder is autosomal recessive, meaning that both parents must be carriers of the gene for their offspring to be affected. Fortunately, there is a DNA test available for diagnosis of affected kittens or detection of carrier cats, and the Breed Advisory Committee recommends that where a breeder is aware of the potential presence of this disease, then all entire cats are tested and any that are positive removed from the breeding programme.

Although semi-longhaired, they are fairly low maintenance. The thicker winter coat will require more attention and in the spring, when moulting, you need to ensure dead coat is removed to avoid knotting.

They are slow to mature and are not considered fully grown until they are around 4 — 5 years of age. Males can weigh from 12 — 16 pounds, and females 9 — 12 pounds. The lifespan of the Norwegian Forest Cat is usually 14 — 16 years of age. 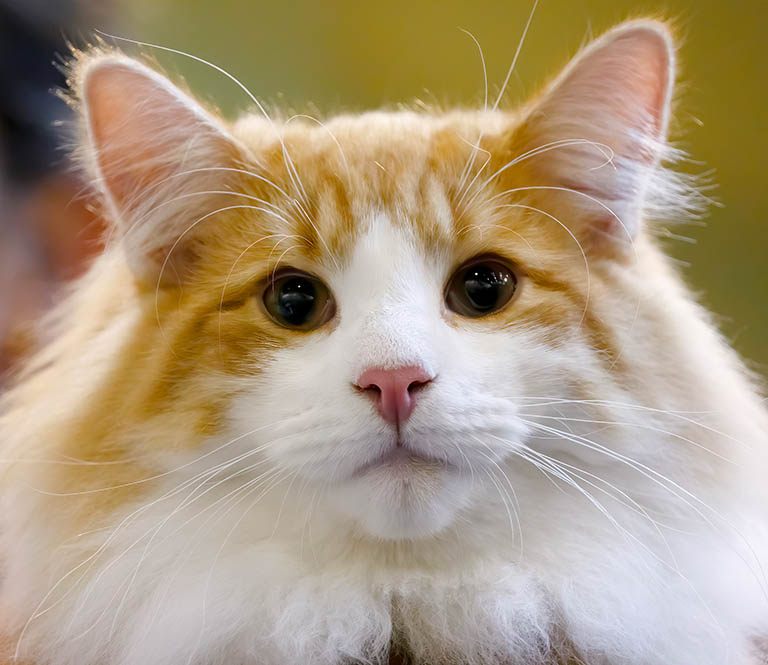 They are friendly cats.

Although large, athletic, and imposing, the Norwegian Forest Cat is gentle and friendly. They enjoy being part of a family environment, but are not demanding of attention.

They have a lot of energy and enjoy interactive games, and think nothing of climbing trees and descending head first. They will entertain themselves with games if you are not at home during the day, so should be provided with plenty of toys and a strong climbing frame designed to hold the weight of a large cat.

Although enjoying human company, they can be reserved with strangers. They have a quiet voice, except when it comes to dinnertime. They have a penchant for fishing, so make sure the aquarium or fish pond is protected!

They are intelligent, independent, and love the outdoors, but equally enjoy a quiet home life too. If you are looking for a family friendly pet, then the Norwegian could be the breed for you, as they are tolerant of respectful children, other cats, and cat-friendly dogs.

With its handsome looks and kind disposition, it’s not surprising that the Norwegian Forest Cat is a popular pet and among the top 10 breeds registered by Governing Council of the Cat Fancy.

Supporting the Norwegian Forest Cat in Britain since 1987.

The Norwegian Forest Cat is truly a natural breed and really does originate from Norway.  The exact origins of the Forest Cats will never be precisely established, but one thing is certain: NFCs can be found in Norwegian folklore, where it is said that these cats were the family pets of the Vikings.

The Norwegian Forest Cat Club is affiliated to the GCCF (Governing Council of the Cat Fancy) , which is the largest cat registration body in the UK.