6ddc6f5f-3106-4d93-88b9-76868232285b
Ocicat cat breed information and advice. Ocicats are a domestic breed that have been selectively bred to have the exotic looks of a wild cat.
Content continues after advertisements

The descriptive breed name of Ocicat was given to a spotted kitten called Tonga, born in the 1960s and bred by Virginia Daly in Berkeley, Michigan. Her daughter, also called Virginia, nicknamed Tonga ‘Ocicat’ because of his resemblance to the wild species of Ocelot. However, the Ocicat is a completely domestic breed and contains no wild DNA.

Tonga arose as a result of an attempt to breed Abyssinian-pointed Siamese. The first generation of kittens from the cross between a seal point Siamese female to a usual Abyssinian male all resembled Abyssinians, but also carried the Siamese gene. The second generation, mated back to Siamese, produced Abyssinian pointed Siamese — but also Tonga, described as having golden spots on an ivory background.

Tonga was neutered and sold as a pet, so did not contribute directly to the breeding programme. However, further matings between his parents produced more spotted kittens that became the foundation of the Ocicat breeding programme.

Other breeders used the same combination of matings of Siamese to Abyssinian, mated back to Siamese. The American Shorthair breed was also used in some of the original foundation cats of the breed and introduced silver to the recognised colours.

The Ocicat was eventually given breed recognition by the Cat Fanciers’ Association in 1986, and championship status in May 1987.

The Ocicat first appeared in the UK in 1988 with the importation of two cats from the Catoninetail cattery in the US, followed by a further four in 1989. More imports and outcross matings to Abyssinians have been undertaken to establish the breed fully, with preliminary recognition granted by Governing Council of the Cat Fancy in 1997 and, thanks to the dedicated work of enthusiastic breeders, the Ocicat achieved championship status in 2006. 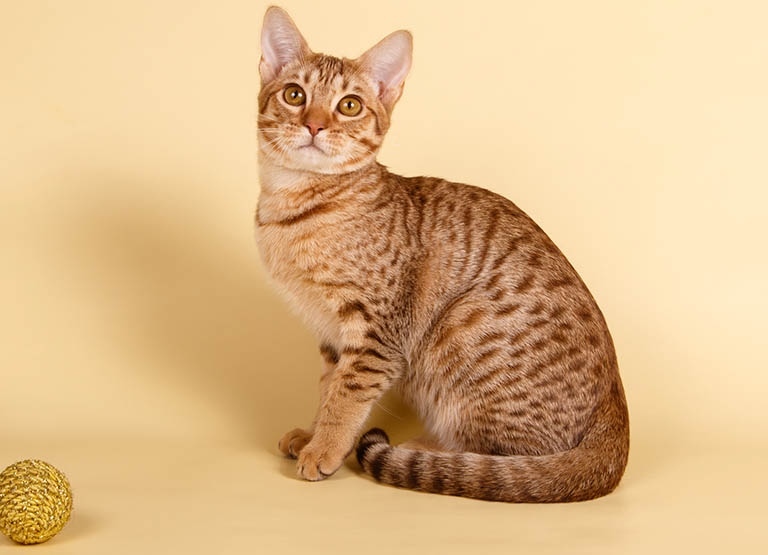 The Ocicat is a medium to large-sized spotted cat of moderate type, noted for its ‘wild’ appearance. It is athletic and powerful, yet graceful and lithe. The spots are well-scattered in a distinctive pattern on the sides of the body, across the shoulders and hindquarters, and extending down the legs, with a well-spotted belly.

The head accentuates the wild appearance and is carried gracefully on an arching neck. It is a modified wedge, longer than it is wide, with a slight dip in profile.
The muzzle is broad with a suggestion of squareness. The chin should be strong, and the jaw firm with a broad, level bite.  The ears are moderately large and wide at the base, and the eyes should be large, expressive, and almond-shaped. All eye colours, except blue, are allowed.

The body is solid, rather long, with a well-muscled chest, while still being elegant. The tail is fairly long and the lovely coat is short, satiny in texture with a lustrous sheen and should be sleek and close lying.

The standard for the pattern is very specific. The eyes should be rimmed with the darkest coat colour and surrounded by the lightest colour, giving a ‘mascara’ effect. There should be dark markings on the cheeks and an intricate tabby ‘M’ on the forehead, with markings extending up over the head between the ears and breaking into small spots on the lower neck and shoulders, and rows of spots along the spine from shoulder blades to tail.

The tail should have rings of darker colour, ideally alternating with spots, and must have a dark tip. There should be scattered spots across the shoulders and hindquarters, extending as far as possible down the legs, with broken bracelets on the lower legs and often broken necklaces at the throat.

There should be larger well-scattered thumbprint shaped spots on the sides of the body, forming a ‘bull’s eye’ pattern of a spot circled by spots. The belly should be well-spotted, and dark markings should be found at the backs of the hind legs.

The Ocicat is bred in twelve different colours:

● Tawny — Black or dark brown spotting on a tawny ground.

● Blue — Blue spotting on a mushroom or pale blue ground.

● Lilac — Lilac spotting on a pale oatmeal or dove-grey ground. 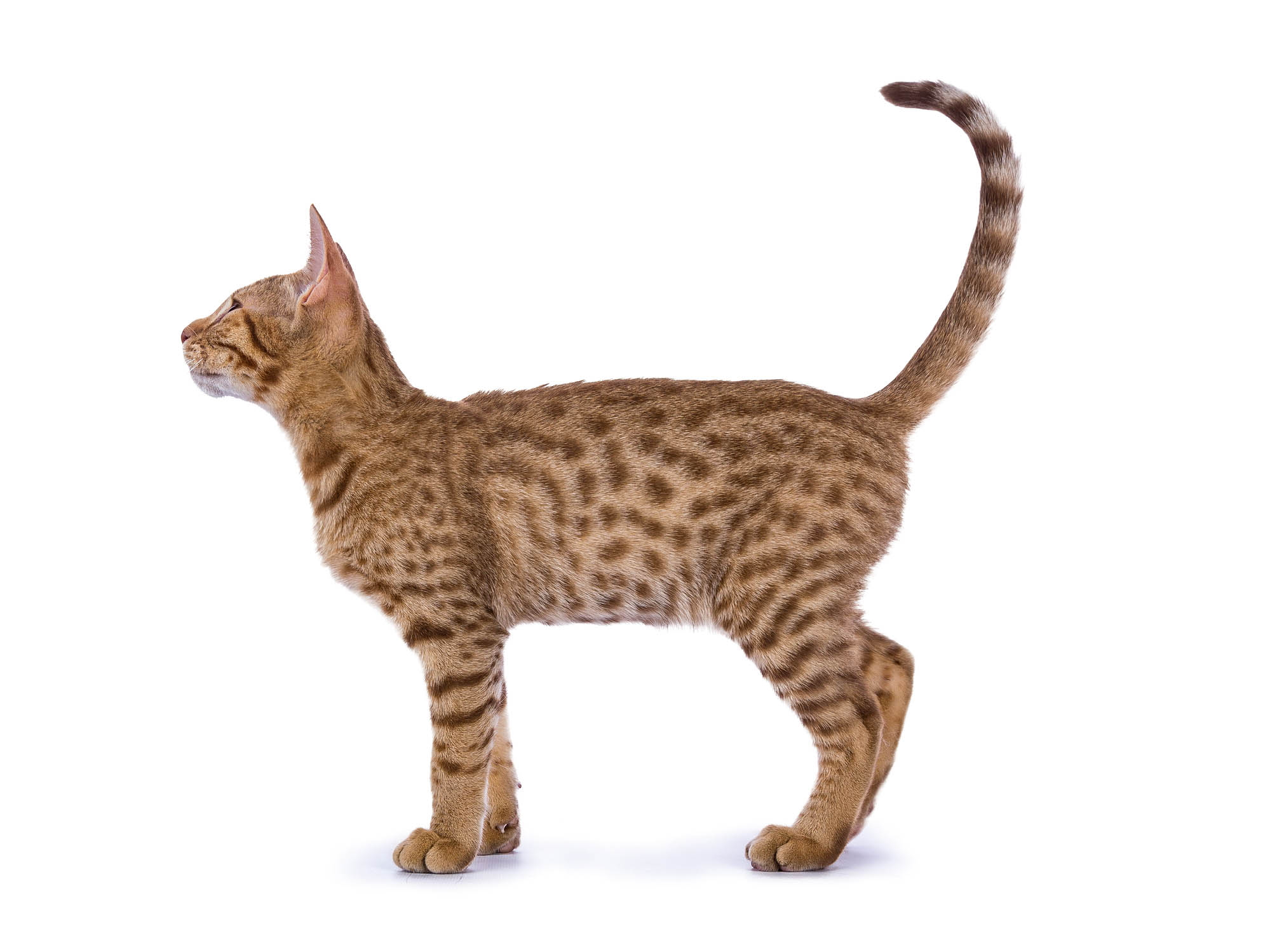 Because of their broad genetic background, the Ocicat is generally a very healthy breed, with no known genetic anomalies. They require no special care, and their short, sleek coat requires only an occasional brush to remove any loose hairs; a polish with a chamois leather will add extra shine. 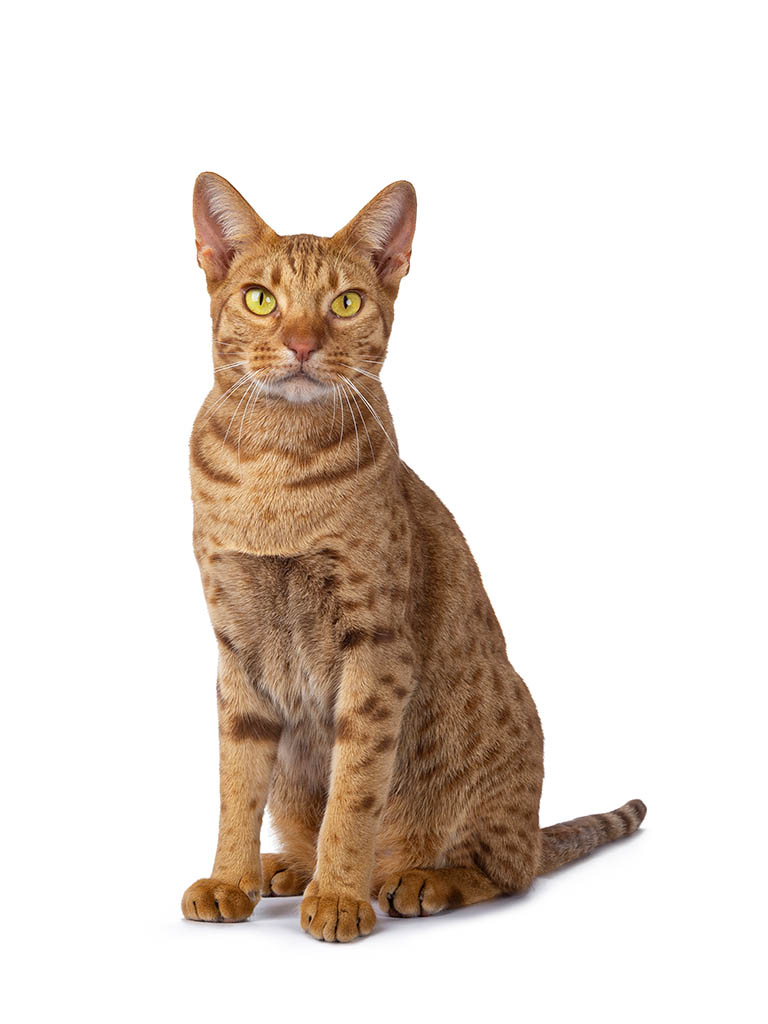 The Ocicat is a completely domestic cat.

The Ocicat captures the appearance of exotic spotted wild cats, such as Ocelots and Leopards, but with the predictable temperament of the domestic cat.

Graceful in movement, as well as being extremely beautiful, they are intelligent, affectionate, inquisitive, and playful.  Their extrovert and sociable personality makes them ideal companions. They bond well with their human family and enjoy interactive play. Confident with visitors to their home, including children, they are adaptable and undemanding. However, because of their sociability, they don’t like to be left alone for long periods and are best suited to busy households. They are well accepting of other pets, including cat-friendly dogs.

Ocicats are athletic, energetic, and can jump easily on to high places, so it is a good idea to provide them with a tall climbing frame with places to perch and snooze.