56fb5783-5e27-40fa-a2f2-563a10809137
Orientals cat breed information and advice. Orientals are very much people cats and will definitely keep owners on their toes.
Content continues after advertisements

The Oriental is a modern, man-made variety, with its origins in the Siamese breed, and was developed from the 1950s onwards.

In the UK in 1951, Baroness von Ullman planned a breeding programme to develop a self-chocolate cat of ‘foreign’ type — known as the Havana today. The preliminary matings were between a chocolate pointed Siamese male and a black non-pedigree cat of reasonable type. Consequently, Mrs A Hargreaves also used her own Siamese and Russian Blues, and Mrs Elsie Fisher also became interested, and the three breeders carried out a carefully planned programme.

In October 1952, a self-chocolate male kitten called Elmtower Bronze Idol made his appearance and was the first of the present day Havanas. During the development of the Havana, lilac kittens also appeared (then called Foreign Lilacs), and in the 1960s progressive breeders, including Mrs Betty Harrison and Mrs Angela Sayer, developed the Foreign Lilac to achieve GCCF recognition.

The Foreign White was also being developed by Mr Brian Sterling-Webb and Miss Pat Turner. Over time, more colours and patterns have been developed using breeds such as Russian Blues, British Shorthairs, Abyssinians, and domestic shorthairs. With so many colours and patterns, many of these were grouped into one breed, the Oriental. 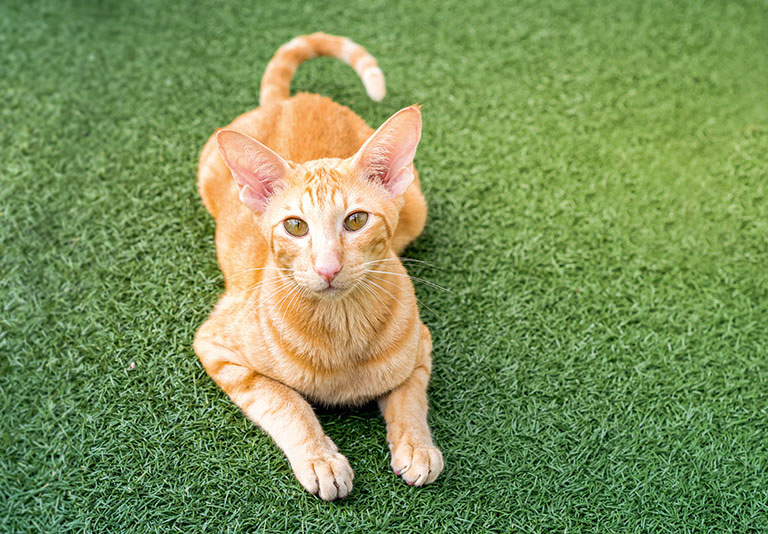 With the Governing Council of the Cat Fancy, Orientals are recognised in two hair lengths — long-hair and short-hair — and four pattern groups:

● Self: this includes black, brown (Havana), lilac, cinnamon, fawn, caramel, red, cream, and apricot — all with green eyes. The Foreign White is now shown as a separate distinct breed (a Siamese in a white coat with blue eyes). The Oriental White currently has Preliminary Recognition with GCCF and comes in three different eye colours, green, blue, or odd-eyed (one green eye and one blue eye).

● Non-Self: Tortoiseshell, smoke, and shaded in the same range of colours as above, with green eyes.

● Tabby: Four patterns are recognised; classic, spotted, mackerel, and ticked in a range of colours, including silver varieties, with green eyes. 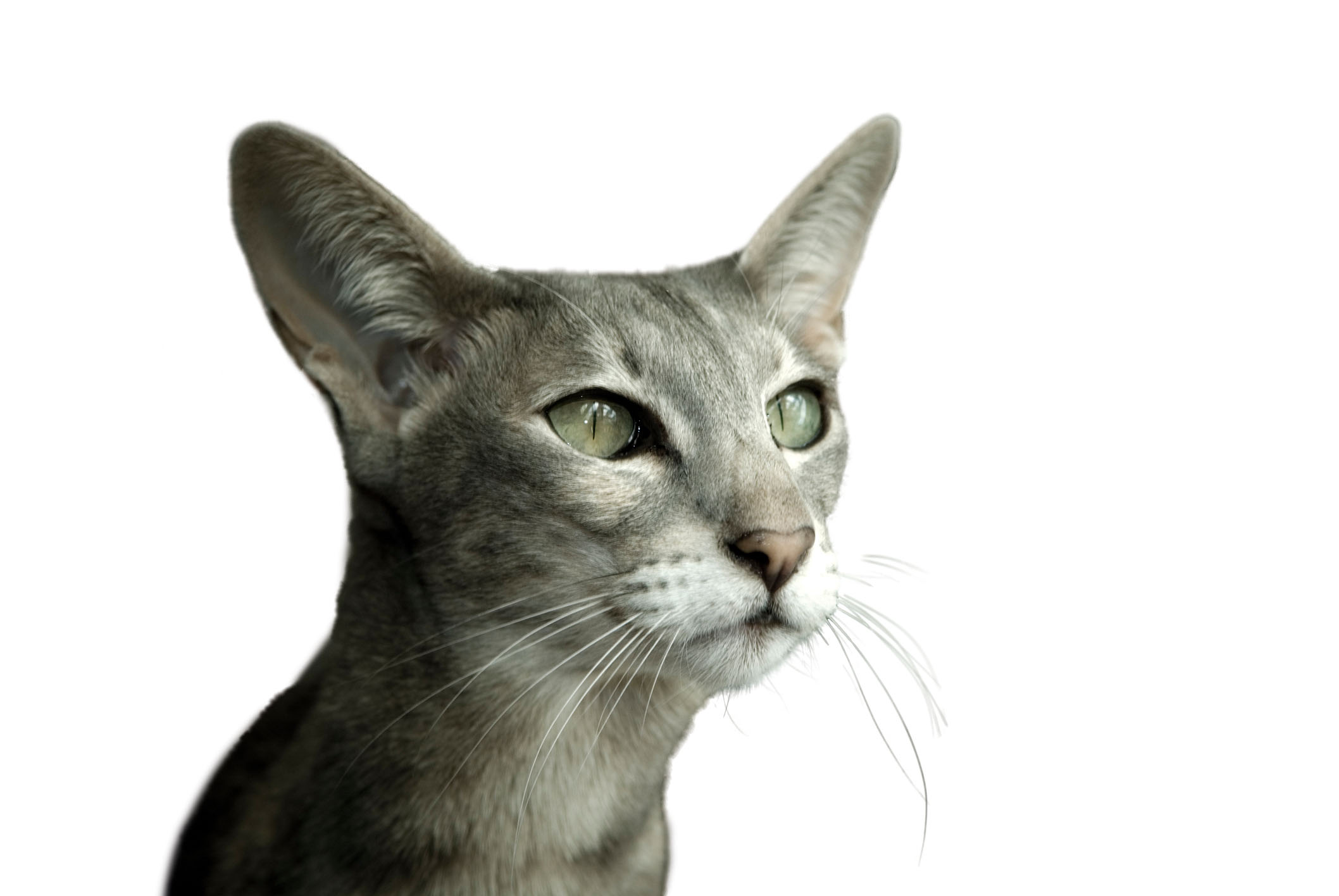 The Oriental is a medium-sized cat, with a long, svelte body that should be firm and well-muscled. The head, set on a long slender neck, should represent an equilateral triangle and be well proportioned with good width between the ears, which are large and wide at the base, and should be set so that they continue the lines of the wedge.

The eyes slant towards the nose and should not be deep set. The head narrows in perfectly straight lines to a fine muzzle and forms a balanced wedge shape. In profile, the nose is straight and the chin strong.

The legs are long and slim, well-muscled, with the hind legs higher than the front legs, and with small oval paws. The tail should be long and tapering.

In the short-hair variety, the coat is very short and fine in texture, glossy, and close-lying. In the long-hair, the fur is medium long, fine, and silky in texture without a woolly undercoat.  The tail is plume-like and the ears may be tufted. Around the neck, there may be a frill. However, Oriental Longhairs don’t normally achieve a full coat until they are mature. 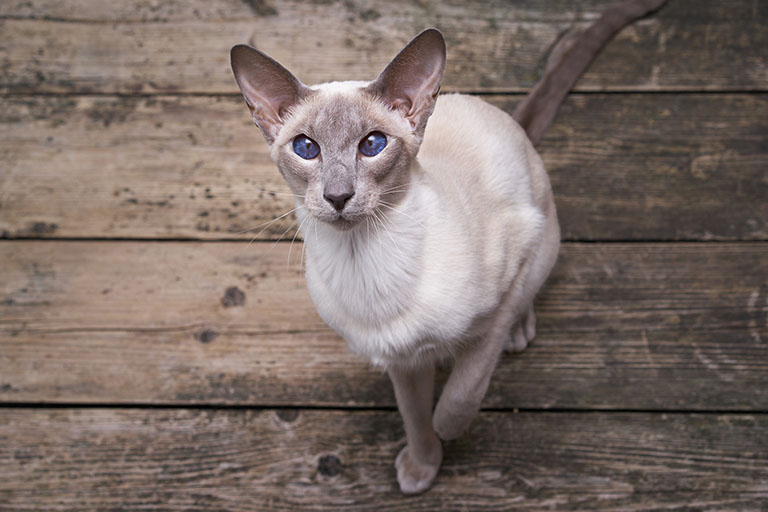 Orientals are generally healthy cats, although there are some disorders that have been identified in the Oriental family. These include progressive retinal atrophy, which causes progressive blindness. Fortunately, reliable DNA tests are available and prospective owners should ask breeders if their cats have been tested and are clear of the problem.

Orientals have been seen to have flat-chested kitten syndrome. They’ve also been seen to have a condition called hepatic amyloidosis. This refers to the deposition of amyloid in the liver. Amyloid is a type of protein compound that can cause disease by abnormally collecting inside tissues and organs. It is the same protein that builds up in the brains of human Alzheimer’s patients. In cats, amyloids are more likely to accumulate in the abdominal organs, especially the kidneys, liver, and pancreas. This build-up of protein clogs the organ and causes organ failure. Signs of organ failure may appear on blood or urine tests, but a tissue biopsy is the only way to specifically diagnose amyloidosis as the cause of the failure. Familial amyloidosis has been described in certain breeds of cats, including the Oriental. There is no effective treatment for amyloidosis as a disease, but diet and medication can be used to support the function of affected organs. Research is currently underway in both Italy and the United States to identify the genetic cause of this disease.

Male Orientals weigh 3 — 5kg, and females around 3kg. Life expectancy is around 12 years. The coat (both short and long) is low maintenance, although Orientals enjoy being brushed as part of the bonding process. 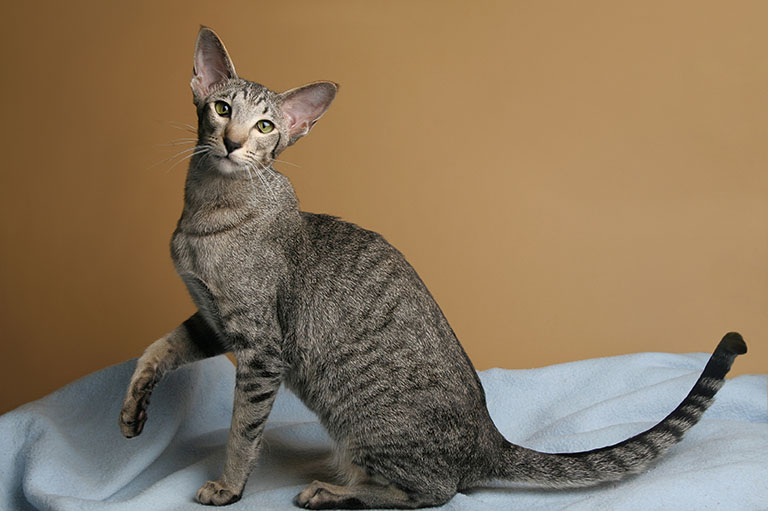 Elegant, beautiful, and highly intelligent, Orientals are also very affectionate and demand the attention of their human and feline companions — you will never be bored with an Oriental in the house! They enjoy living as part of a group and don’t do particularly well as an only cat. They are happy with the company of children and dogs, and remain kittenish all their lives.

Orientals are talkative, active, and athletic, and enjoy games, climbing, and jumping. They can be trained to walk on a harness, and should be provided with plenty of interactive toys and climbing frames. When they are tired of fun and games, they like nothing better than to curl up on your lap, in a heap with others, or snuggled beneath the bedclothes with you. Be prepared to share all of your living and sleeping space with these extrovert individuals!