The Selkirk Rex cat makes an excellent family pet. Not only are they playful and very attached to their humans, but they are also good with children and are very placid. They are happy to live both the indoor and outdoor life and love company.

These cheery little cats have an easy-going temperament and are renowned for their charisma. They love human affection and are placid and laid-back. Selkirks are also said to be very loyal and devoted companions, playful, cuddly and very 'purr-y'!

Selkirks are very adaptable and will suit most households as they are happy as lap cats, and they also enjoy access to the outdoors too. But they do like company so if you will be out all day, make sure you have two cats to entertain each other.

The most eye-catching thing about the Selkirk is their delightfully curly coat, which comes as either a shorthaired or longhaired variety, while a variant has straight fur.

The Selkirk Rex's curly coat is the result of a dominant gene that causes each hair to have a gentle wave or curl, giving the coat a soft feel. The curliness of the coat is variable according to age, gender, climate, time of year and hormones, particularly in the female. Due to the gene which makes their coats curly, a litter of Selkirk kittens can be 50 per cent curly and 50 per cent variant. Selkirk Rex kittens may lose their curls as they grow but develop adult curly coats from eight months onwards.

Selkirk Rex come in a huge variety of colours and have medium to large bodies with full-cheeked faces and large, round eyes.

The gene that determines the Selkirk Rex breed causes each hair to have a gentle curl or wave, giving the coat a soft feel.

The breed is medium to large with heavy boning that gives the cat surprising weight and an impression of power. Females tend to be smaller than males, but not dainty in appearance.

The coat occurs in both long and short-haired versions, and the curliness of the coat varies depending on age, gender, climate, time of the year, and hormones, particularly in the female. The longhair coat is semi-long and gives a tousled, unstructured look to their coat, with the curls most prominent on their flanks and underside, with a curly ruff around their neck. The curls on the tail are plumy and stand out away from the tail.

In the shorthair, the coat length is fairly uniform over the entire body, dense and plush in texture with curls; the ruff and tail fur being a similar length to the rest of the coat, with tail curls that are plush and lie compactly around the tail.

They are sometimes likened to a teddy bear. Kittens are obviously curly at birth but may lose their coat and begin to develop a curly coat again at about 8 — 10 months of age. The coat continues to develop until the cat is about two years of age. All colours and patterns are allowable, as is any eye colour.

Similar in type to the British Shorthair, the Selkirk Rex has a round, broad head with full cheeks. The ears are medium sized and broad at the base, set well apart on the broad head and may have curly internal furnishings. The forehead should be rounded and the eyes large and round. In profile, the nose, which should be short, broad, and straight, can appear to have a convex curve, and the medium-width muzzle has well-padded whisker pads, giving a rectangular impression that should be clearly visible beyond the cheeks. The whiskers are curly or broken. The chin should be firm and well developed.

The body should be cobby in type, with a level back and a slight rise to the hindquarters, broad across the shoulders and rump. Legs are medium length and well-boned, and the paws round and firm.

The tail should be medium length, thicker at the base with a rounded tip. 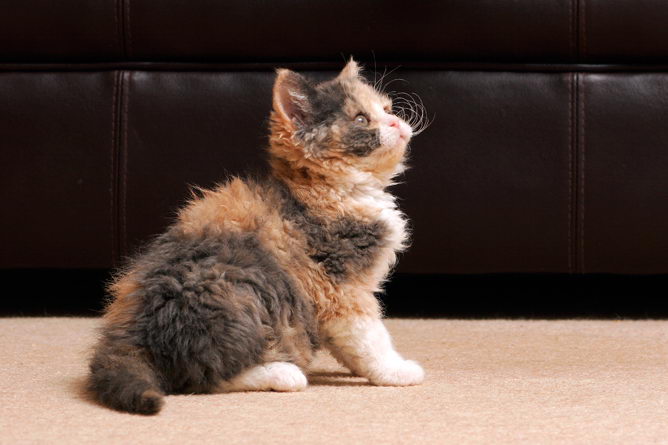 The Selkirk Rex originated in Montana, USA, in 1987 when a Persian breeder adopted a 'strange looking' curly-coated kitten from a local shelter. She bred her to one of her black Persian males and three of their six kittens had curly coats. Selkirks arrived in the UK in 2002 and were given GCCF championship status in 2009.

Unlike some cat breeds, where their origins have been lost in the mists of time, the appearance of the first Selkirk Rex is well documented. Miss DePesto was one of a litter of six kittens born in Sheridan, Montana, USA in 1987 — the only one among her siblings to have a curly coat.

Her mother was a tortie and white domestic longhair with a wavy undercoat. She was handed into a shelter who then contacted Persian breeder Jeri Newman, who was known to have an interest in genetics. Miss DePesto was a blue tortie and white shorthair with thick, gently curled hair on her neck, legs, tummy, and tail, with straight hair down her back. Jeri Newman subsequently mated Miss DePesto to her black Persian male, Ch Photofinish of Deekay, in order to improve head type, boning, and hair length to improve the curl. The resulting litter arrived on July 4, 1988 and included three curly-coated kittens, and three straight-coated kittens, indicating that Miss DePesto’s curly coat was the result of a dominant gene.

One of the kittens from this litter was a black and white male called NoFace Oscar Kowalski. Oscar was subsequently mated to Persians, Exotic Shorthairs, and British Shorthairs, producing the foundation cats for the breed. 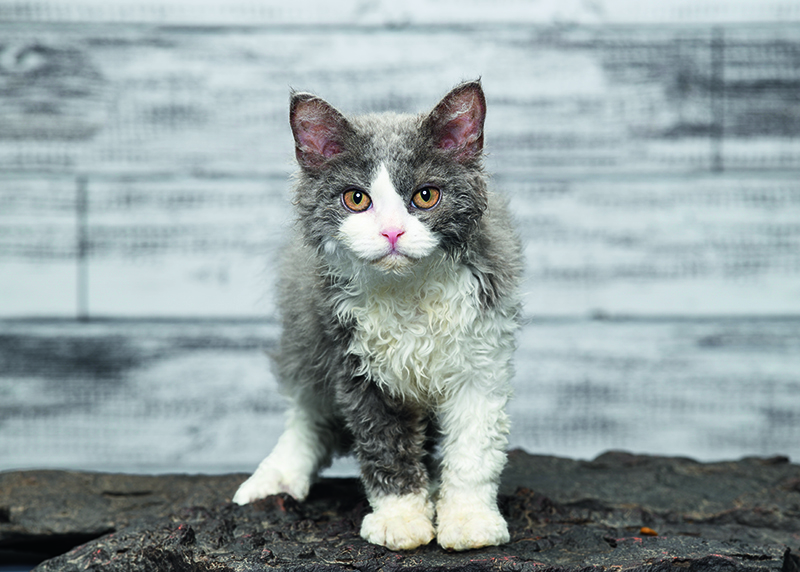 With an endearing temperament, the Selkirk Rex makes a wonderful family pet. Developed from British Shorthairs, Persians, and Exotics, their genetic background is reflected in their personality traits: affectionate, patient, playful, alert, and intelligent. They will be tolerant with respectful children and other family pets, including dogs. They love human company and enjoy a cuddle.

Visitors are often intrigued by the cats and want to touch their coats and owners may have the urge to pick their cats up — fortunately, the Selkirk Rex is a patient cat that accepts these human foibles with great tolerance. 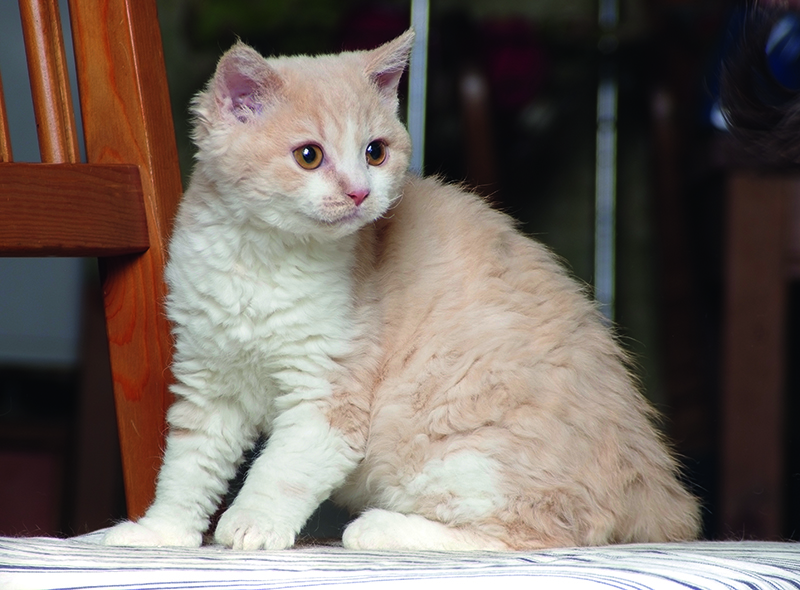 It is recommended that Selkirk Rex are groomed weekly using a wide-toothed comb so their fur doesn't become matted. Their curly fur can also sometimes cause irritation in the ears so clean these weekly. Make sure your Selkirk Rex kitten comes from a responsible breeder who has screened their cats for Polycystic kidney disease (PKD) and Hypertrophic cardiomyopathy (HCM).

The Selkirk Rex is high maintenance as far as its coat is concerned (especially the longhair variety), as they do shed and they need daily grooming with a wide-toothed comb to remove loose hair and ensure the coat doesn’t become tangled. However, care has to be taken not to overgroom or that will reduce the curl.

Some cats (in common with all Rex breeds) may be prone to a greasy coat and will require the occasional bath. They should have a slightly unkempt appearance, but should never be allowed to mat. Ears should be cleaned once a week. It has been said that Selkirk Rex are hypoallergenic, but this is not correct.

The breed is generally very healthy and robust. However, there are health problems that may be inherited from the breeds in their background. This includes polycystic kidney disease (PKD) from Persians and Exotics, and hypertrophic cardiomyopathy (HCM) from British Shorthairs. Fortunately, there is a simple DNA test for PKD and, in the UK, all Selkirk Rex registered with the GCCF for breeding must be tested clear for PKD, or be from two genetically tested parents. Always request proof of testing from the breeder if you are purchasing a Selkirk Rex.