Formerly known as the Siberian Forest Cat, Siberians are cheerful, charismatic and cuddly cats who bring so much love to their homes.

Wayne Baxter, chairman of the Siberian Cat Club, says: "They are very loving cats; the males are bigger and slightly more docile, whereas females tend to be smaller and bond closest with an individual, and they do things more on their own terms. Either way they make great pets."

They are described by breeders and owners as being dog-like in their personalities, as they are incredibly loyal to their owners and run to greet you when you come home. They also like to get into in whatever happens to be going on in the house at the time, whether it's reading the paper with you (by draping themselves across it!) or 'helping' you with your household chores.

"They have to be involved in everything; they'll always be either two steps in front or two steps behind you!" laughs Wayne. "But they'll love curling up on the sofa with you while you're watching TV. They're very addictive as well - one Siberian is never enough."

Siberians are actually good all-rounders as their sweet natures mean they are great with children and dogs, and even other cats. One of the breed's more unusual traits is their love of water due to their waterproof topcoats, whether it's a running tap, a sink of water or a shower, your Siberian may well find a way to enjoy it - so bear in mind that next time you take a bath, you might find yourself with a fluffy gatecrasher!

Siberians are happy being kept as either indoor or outdoor cats, but indoor-only cats will need lots of toys and stimulation to keep them happy. Wayne says: "They are a breed that loves to be kept interested and love to climb so it's to your advantage to have a sturdy, tall scratch post for them to climb."

Will a Siberian cat suit my allergies?

A long-standing claim is that Siberians' special coats are said to contain less of the FelD1 allergen found in cat dander which makes them popular with cat allergy sufferers. However, the Siberian Cat Club is keen to emphasise that this should not be taken as 100 per cent true and breeders always recommend that you spend plenty of time with a Siberian to determine if this will work for you.

The club also points out that claims that males are less 'hypo-allergenic' than females and that certain colours of Siberians, including colour points, black and blue, have more of the allergen FelD1 - these are NOT true.

The Siberian is a medium to large cat with a broad chest and a wedge-shaped head, topped off with tipped ears. Siberians have semi-longhaired coats and as mentioned, their top coat is waterproof with a dense, soft undercoat which grows thicker in the winter - a throwback to living through the cold Russian winters.

They come in a huge variety of colours and patterns including brown, black, blue, red, cream and white in solid, tabby, colourpoint and tortie - a total count of 124 variations! Their eyes are mostly tones of copper or green.

The breed can be traced back to rural farms in Russia and the streets of St Petersberg during the 13th century. The breed became scarce during World War Two but it is thought that the cats that survived the harsh climates did so because of their dense undercoats and top coat, and it was this trait that gave them the name Siberian. They were exported to Europe and the USA in the 1990s, and they arrived in the UK in 2002. 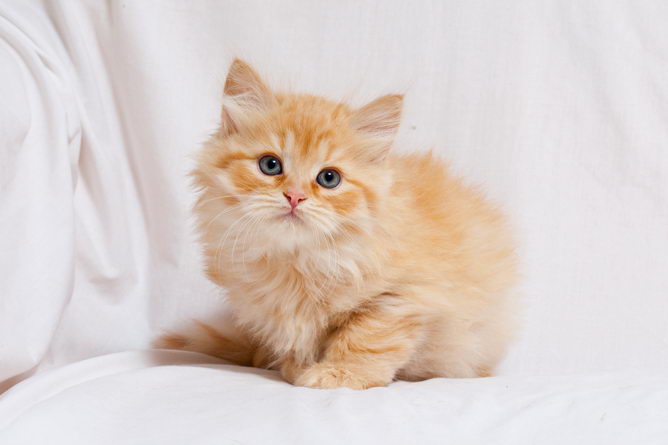 You should expect to pay around the £500 to £600 mark for a pet quality Siberian kitten, maybe slightly more in the south and London, or if they have been neutered, and you may have to wait a while if you desire a certain coat colour or pattern.

As with all breeds, look for playful, healthy kittens with shiny coats, clear eyes and ears with clean bottoms. Make sure you see the kittens with their mother, and possibly the father. If you have an allergy, spend plenty of time with your preferred kitten to make sure you are compatible.

Despite their double coats, when it comes to grooming, Siberians don't have a particularly high maintenance grooming regime. As they have seasonal moults in the spring and autumn, a daily comb during this time will keep their coats well maintained and other than that, a comb every other day will keep them looking their best.

With its origins lost in the mists of time, the Siberian is what is known as a landrace or natural variety of domestic cat. Also known as the Siberian Forest Cat or Moscow Longhair, it comes from Siberia and is the national cat of Russia. Living pretty much as a feral cat in its native country, it found its niche as a rodent controller on farms, but was also prized as a loyal and affectionate pet by Russian families. It has regularly appeared in Russian fairy tales and stories.

With the fall of the Berlin Wall and the ending of the Cold War, the Soviet Union became a series of independent republics and the Siberian Cat started to be exported; first to the United States in 1990, imported by a breeder called Elizabeth Terrell of Baton Rouge.

These included a male, Kaliostro Vasenjkovich and two females, Ofelia Romanova and Naina Romanova. The Siberian was accepted for registration by the Cat Fanciers’ Association in February 2000, and granted championship status in February 2006, but is still fairly rare in the US.

Harrison Weir first mentions the Siberian in his 1889 book ‘Our Cats and All About Them’ and he states that they appeared at early cat shows. However, they didn’t arrive officially in the UK until 2002, where they have quickly become popular and are now the tenth most popular breed by registrations with GCCF.

The Siberian Cat is a solid, medium to large semi-longhaired cat. Its most important features are head type and coat quality. The overall impression should be of a cat with substance and rounded contours. Larger animals are preferred, though females will be somewhat smaller than males, but the overall type is the most important factor. The Siberian has a very distinctive weatherproof coat, unique to the breed and, as the breed originated as a natural outdoor cat in Russia, the overall appearance of the Siberian Cat reflects this natural heritage. It is a slow developing breed; full development can take four to five years. The head should form a short, broad wedge with rounded contours, with a slightly rounded muzzle and chin. The cheekbones are low set and broad. In profile, there should be a slight concave curve at the bridge of the nose, which should be of uniform width when viewed from the front. The whisker pads should be moderately well developed and form a gentle, rounded line with the chin, with the muzzle broad and rounded, and the chin should be slightly rounded. The ears are medium sized, rounded at the tip and set wide apart and should be well furnished. The eyes are large and slightly oval shaped. The body is rectangular but not too long, and the cat should be medium to large, well muscled and heavily built with a broad chest. The neck should be short and substantial. The legs should be medium length with substantial bone and strength, and the paws large. The tail is broad at the base and tapers towards the tip. The tail should reach the shoulder blade and be well furnished. The texture and structure of the coat are important features of the breed, although kittens may have softer fur. The coat is medium length, with a substantial ruff, with a very dense undercoat that is soft and fine, covered by a coarser, more substantial topcoat. The Siberian is recognised in a wide variety of colours and patterns

The Siberian is an affectionate, adaptable breed. They fit in well in most situations, including with young children, dogs, and other pets. They have quiet voices, tending to chirp rather than meow. They are agile and athletic and because they are quite a heavy breed, items such as tall cat trees should be sturdy and substantial enough to take their weight, and bear in mind they have great jumping ability. They enjoy being up high and being able to survey their domain. Although they are friendly and attach themselves to their family members, they are not hugely demanding, but will happily follow you around the house. They are pretty bright so will need plenty of toys and puzzles to keep them amused. Unlike most cats, they like water so will often be found playing with a dripping or running tap, or may try to join you in the shower!

Because their coat is semi-long and dense, they do need regular grooming to avoid the thick fur becoming matted. The best tool for this is a wide-toothed steel comb. If you are purchasing a Siberian kitten, ask your breeder to demonstrate the best way to groom and keep the coat looking its best. Bear in mind that they will shed their heavy winter coat in the spring.

The Siberian is known to reach reproductive maturity earlier than most breeds, so if your new kitten hasn’t already been neutered or spayed by the breeder, make sure to book it in with your own vet for the procedure. The Siberian is generally a healthy breed, but cases of hypertrophic cardiomyopathy (HCM) — the most common form of heart problem in cats — have been recorded in the breed. Males weigh between 17 — 26lbs (7.7 — 11.8kg) and females from 13 — 17lbs (5.9 — 7.7kg). The average life expectancy is 12 to 15 years or more.