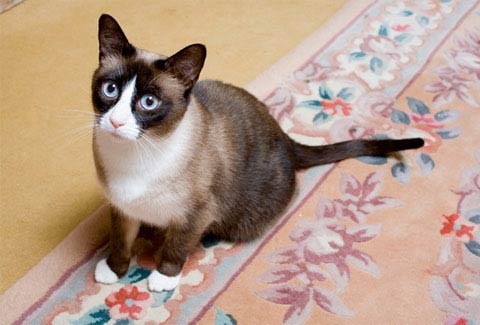 5d34b135-037b-427a-9d91-fc81c5dfee05
Snowshoe cat breed information and advice. Snowshoes are as different as pebbles on the beach - each kitten has his own distinctive pattern.

All about the Snowshoe cat breed

With their stunning deep blue eyes and signature white feet, it’s hard not to fall for the striking Snowshoe. A relatively rare breed, these beauties aren’t just a pretty face.

“Similarly to their Siamese ancestors, Snowshoes are lively cats with real extroverted personalities,” says Anne Jones, secretary of the Snowshoe Cat Society. “They are mischievous and very dog-like — they have to be with you, supervising what you’re doing, at all times!”

An avid Snowshoe fan for more than 10 years, Anne first came across the breed at a local cat rescue where she volunteers: “We had a male Snowshoe in for rehoming and when I saw him, I was first struck by his stunning and unique look, and then his personality. He was named Adie, and he had a dark moustache.”

Anne now has three Snowshoes at home, all of which are female: “The eldest is Coldenufforsnow Osage, who we call Saffy, a seal mitted kitty who is nine years old and was my first Snowshoe. She is most definitely a one-woman cat — and that woman is me!

“She loves chatting away to me and is the proud mother of my other two Snowshoes, Ruby and Amethyst.

“Seal-point Icegems Ruby is six-and-a-half years old, and she is very sociable and vocal. She is extremely loving and has a strong determination to get her own way! Icegems Amethyst is four years old and also a seal-point. She’s a sweet-natured, quiet cat but can be very greedy!”

Described as bomb-proof, these kitties love the limelight and are very adaptable. Anne says: “Nothing fazes Snowshoes — they enjoy being the centre of attention and are very entertaining, interesting cats who are up for anything.”

Despite Snowshoes being so rare, world-famous feline, Grumpy Cat, is believed to have possible Snowshoe traces in her ancestry!

Snowshoes adore human company, and so like to be with their owners at all times. Some are very much lap cats whereas others just enjoy being by your side. She explains: “They love to sit near you, but not necessarily on you. They enjoy being involved in whatever their owners are doing, so if you want a cat that will leave you to your own devices, the Snowshoe definitely isn’t for you!”

Snowshoes are a lively breed and love to play. They can be quite mischievous too.

“They are naughty, but in the best possible way!” adds Anne. “They are full of fun and there’s never a dull moment with a Snowshoe about! They have a lot of energy and curiosity; they love to go out and play in the garden and can be very good hunters.”

With a medium build inherited from the mix of their sleek Siamese and stocky American Shorthair ancestors, Snowshoes are characterised by their trademark white feet and bright blue, walnut-shaped eyes. They have a wedge-shaped head with slightly rounded contours, medium to medium-large ears, and a medium tail which tapers slightly towards the tip.

Snowshoes have muscular yet agile bodies and a short, close-lying coat, which can appear to have a slight sheen when in top condition. The most common colours are blue- and seal-point, although there are others. In terms of patterns, the classic seal with the inverted V-shape mask is most commonly seen, but there are also mitted, colour-pointed, bi-colour and harlequin patterns.

The breed was first discovered in America in the early 1960s when breeder Dorothy Hinds Daugherty, from Philadelphia, discovered that three kittens in a litter of Siamese each had four white feet. She developed the breed by crossing one of the kittens with an American Shorthair and named the breed Snowshoe because of their signature white paws. The Snowshoe was brought across to the UK thanks to Mollie Southall, who promoted the breed after spotting one in a pub when on holiday in Norfolk back in the 1990s. Snowshoes were given championship status by the GCCF in 2013.

Snowshoes are a healthy breed and have no known inherited diseases. Although cases of polycystic kidney disease (PKD) have been reported, no mandatory tests are required from breeders. Snowshoes are fairly low maintenance when it comes to grooming, with very little upkeep needed thanks to their short coats. They are very clean cats who are happy to groom themselves, although a brush every now and again can help with moulting.

As Snowshoes are quite rare and there are very few breeders in the UK, you could be waiting a while for your kitten. You should expect to pay around £500 for a pet-quality Snowshoe kitten. Make sure the breeder allows you to meet the mother when you visit. Anne advises: “When choosing a kitten, look for one that is a good size, with clean eyes and ears. He should be alert and sociable, and should be interested in everything!”

Is the Snowshoe the cat breed for you?

Snowshoes are suitable for most households, but due to their extroverted nature, they would be better suited to homes where they won’t be left alone for too long, or where they can live with other animals. They get on well with children and other pets and do not need to be indoor-only (although if you live near a busy road, this would be advised as they are not very road-savvy).

Snowshoes have a lot of energy so they do need to have a vast array of toys at their disposal to keep them entertained.