Despite the Sokoke’s elusive presence in the feline fancy, animal lovers can’t get enough of these playful, intelligent, and family-orientated cats.

One of the rarest breeds in the UK (there are currently less than 30 registered with the GCCF), Sokokes are winning over breeders and owners alike with their stunning good looks and gregarious personalities.

They adapt very easily into family homes and, once they’ve found their feet, will be the first to greet visitors to the door.

The Sokoke is the new cat on the block

Sally Rainbow-Ockwell, chairman of the Sokoke Breed Club, and GCCF judge, was one of the first breeders to bring this breed into the mainstream cat world, after reading about it in some of the GCCF’s paperwork — and falling head over heels in love. She says: “They’re very inquisitive and will follow you everywhere you go like a dog. They’re very sociable and will get on with everyone, including each other. Mine get on with my Burmese too. They’re known for piling on top of each other. They will get on with most breeds, from what we’ve seen.”

Sokokes are extremely playful and love to jump and climb. Sally says hers can jump up on top of cupboards and like to run across curtain rails — so if you can’t find your Sokoke in the house, it’s definitely worth checking up high, as they love to look down on you and observe their surroundings.

“They have to be involved with everything you’re doing,” says Sally.

Sokokes have a very special bond with their owners; your cat will love to spend time with you, and will quickly become your best friend once he’s settled into the family.

These lively cats have bucketfuls of energy, so anyone thinking of giving a home to one of these beauties should prepare themselves, as they aren’t for the sedate or faint-hearted. They require plenty of playtime and they love their toys, so fetching and pouncing games are a must.

Some Sokokes also enjoy going out for walks on a lead and harness — anything to stretch their legs! You have to be prepared to put plenty of time into your cat to keep him stimulated, as a bored Sokoke isn’t a happy one.

Just to make sure they aren’t passed by, Sokokes are also very vocal, and will tell you everything on their minds with a yowling miaow!

The Sokoke is a lean, medium-sized cat with a long, graceful body and slender legs. The position of the hindlegs gives the breed a tip toed gait, which becomes more pronounced when the cat is excited. Sokokes have medium to long tails, almost whip-like in nature, which taper down to narrow tips.

They have high, defined cheekbones, medium to moderately large ears, and large, almond-shaped eyes, which vary from greenish amber in the Sokoke, to blue in the Snow Sokoke. Most Sokokes have modified brown tabby coats, but a few Snow Sokokes exist, who have much paler coats with tabby markings. 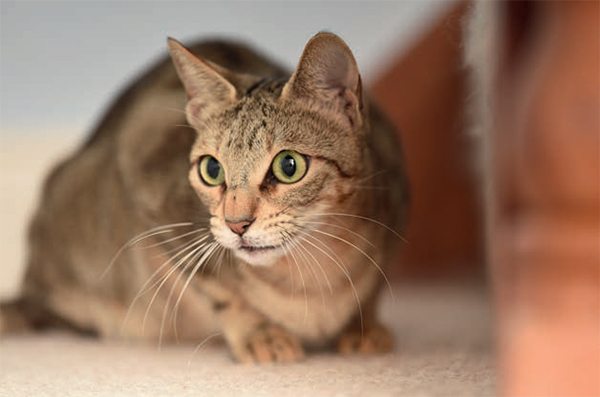 Sokokes were found as a naturally occurring native breed in the greater Arabuko-Sokoke Forest Preserve area, in the coastal zone of Kenya, near Mombasa.

The local tribe called the cats ‘Kadzonzo’, which means ‘looks like tree bark’, because of the distinctive ring patterns on their sides. These cats are now almost extinct in the wild.

In 1978, horse breeder, Jeni Slater, found a litter of these domestic-type cats in her garden and hand-reared a pair of kittens with the help of her staff.

She later decided to take a pair to Europe, and then imported three more, forming the foundation of the breed on the continent, with additional cats brought over from Kenya in the early 1990s to strengthen the breed lines.

As the Sokoke’s coat is very short, close-lying, and glossy, and there is little or no undercoat, grooming is an easy task. A hand groom and then a brush once a week is all that’s necessary.

As with all breeds, make sure you keep your cat’s eyes and ears clean, and his claws trimmed. Sally adds: “Currently, the oldest Sokoke in the UK is nine years old, so not much is known about their health in old age, but there are no known inherited diseases or health issues associated with the breed.”

As the breed is so new, Sokoke kittens are very rare, with only a small number of breeders registered in the UK — so be prepared to wait a while for your new feline addition. As with all kittens, look for healthy cats with bright eyes and clean ears and bottoms. Kittens should be playful and inquisitive. For more information, call Sally on 01793 783351 or email [email protected]

Is the Sokoke the cat breed for you?

Sokokes are good for homes with slightly older children, or for owners with dogs, as they are a very sociable breed.

However, Sally says their endless energy means they probably wouldn’t be a good fit for elderly owners or those with young babies.

“They’re very lively and they’re a lot more playful than they are sedate! Some of mine have gone to homes with children of around six or seven years old though, as they love exercise and fun, so they will play with children quite happily for hours,” she says.

Sokokes are happy at home during the day while you’re at work, but will become bored if left alone, so will definitely need some company, either from another cat or human, and plenty of stimulation.