af6b63c5-6a16-4565-bb66-046736875255
Suffolk Chocolate cat breed information and advice. These cats have already made their mark on cat lovers, thanks to their gregarious, outgoing personalities and beautiful, shiny coats.

Although considered a new breed, being accepted for registration by the Governing Council of the Cat Fancy (GCCF) in 2014, it is, in fact, a re-launch of a breed originally developed back in the 1950s.

The first records of a self-brown cat date from 1894 when an English cat fancier named Mrs French imported a chocolate-coloured female from Europe called Granny Grumps, and bred a male kitten from her called Master Timkey Brown.  These cats were described at the time as “Siamese, with coats of burnished chestnut, with greeny-blue eyes.”

Other imports were made but brown cats were considered unorthodox in the UK. In 1951, Baroness von Ullman made a study of the inheritance of the chocolate gene in cats, and planned a breeding programme for a self-chocolate cat of “foreign” type.  This led to the development of the Havana (or Havana Brown as it is known in the US) and it was granted breed recognition by GCCF in 1958. It was originally given the name of Chestnut Brown Foreign Short-hair, against the wishes of the breeders; this name was used until 1970, when GCCF agreed to the use of the name Havana once again.

The Havana’s popularity waned in the 1970s and 80s, and type development of the modern Siamese and Oriental had an effect on the type and coat quality of the Havana. As a result, a small group of breeders in the UK developed the Pure Havana group within the breed club, working on a dedicated breeding programme for self chocolate cats with the type of the original Havana. This led to the importation of a Havana Brown from France. To distinguish the cats in the breeding programme from the Havana (Oriental Chocolate) shown in GCCF, a new name was chosen: Suffolk — and new breed status agreed in June 2014, leading to preliminary status in 2016, and finally championship status in June 2018.

The Suffolk is a short-haired cat of foreign type. Graceful and elegant with a muscular body and long limbs, it should never be extreme. The type should be balanced, with high, though not upright, ear set and moderate head type. The eyes must be a clear, intense, vivid green with an alert expression.

The head should be longer than wide, with good width across the cheeks and a slight pinch at the muzzle which, although narrow, should be gently rounded and the chin should be firm. The ears are large and wide at the base with a slight forward tilt.

The eyes are medium sized and almond in shape, set at a slightly oblique angle.  The body should be muscular and lithe and the legs long and elegant with dainty oval paws. The tail length should balance with the body and slightly taper towards the tip.

The Suffolk comes in two colours: chocolate, and its dilute form, lilac. The Suffolk has a single coat that is short to medium in length, smooth with a lustrous sheen.  The chocolate version can be any shade of warm rich chocolate; the colour should be sound with a glossy surface sheen. The paw pads, nose leather, and eye rims should be deep chocolate or pinkish brown. The lilac version is frosty grey with a distinct pinkish hue to give the appearance of dove grey, with the paw pads, nose leather, and eye rims being pinkish mauve. Kittens may show slight tabby markings that resolve as the kittens grow.

They are hardy cats and will happily go outside in most weathers, but must not be allowed to become damp and chilled. A hot summer may bleach the coat so that it has
a reddish tone in parts, but the coat will grow through to its correct colour with an autumn moult. To maintain that wonderful shiny coat, a well-balanced diet is essential, as with all cats, and foods containing Omega 3 are particularly beneficial.

Especially if neutered, a check needs to be kept on their weight as they do enjoy their food. Their coat is very easy to maintain; it is low shedding, but they enjoy the sensation of being brushed and polished with a silk scarf, using a sweeping motion, which helps to give the coat a healthy sheen.

The interests of the breed are maintained by the Suffolk Breed Cat Club which is affiliated to the GCCF. If you are interested in acquiring a Suffolk, you may need to wait a little, as they are still relatively rare. In 2020, GCCF registered just 62 Suffolk kittens, although the numbers are steadily increasing.

The Suffolk is a healthy breed and medium in size. Males will usually weigh 4 – 5kg and females less, at around 3kg. However, as they are descended from Orientals, it is possible that they may be prone to conditions that affect that breed, but there is no evidence for this as yet, and there have not been any reported health issues with the breed to date. 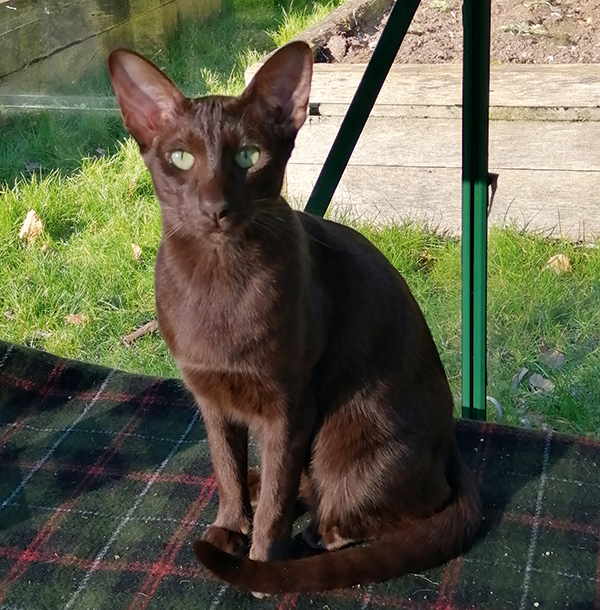 An ideal  house cat, the Suffolk is a good companion.

Said to have a dog-like devotion to their human family, the Suffolk makes a wonderful pet. They will accompany their owners happily and can even be trained to accept a harness and lead.

They have a charming character and sweet temperament. Ideal as a house cat, they make good companions for children and older folk alike.

They are very tactile cats and like to use their paws to touch and communicate.  Active, energetic, and lively, they will appreciate a sturdy climbing frame and a variety of toys to keep them amused.  They are intelligent and curious, and happy to meet and greet visitors to your home. They are quite talkative and extrovert, and are natural show-offs, enjoying a day at a cat show or just demonstrating their athleticism in play and games. It is said that they enjoy playing and grooming their owners’ hair, an unusual trait that Suffolks appear to share.

Thanks to their friendly nature, they integrate well with other cat breeds and also cat-friendly dogs. Whether reclining or playing, the Suffolk’s graceful and elegant lines are always aesthetically pleasing.

If you’re out for long periods of time, Suffolks will get lonely, so it’s best to give them a stimulating environment, or another cat with whom to play.

Linda says they can cope on their own during the day, as long as you give them plenty of attention when they’re home, adding: “I’ve rehomed cats to single people, who say they’ve completed their lives.”