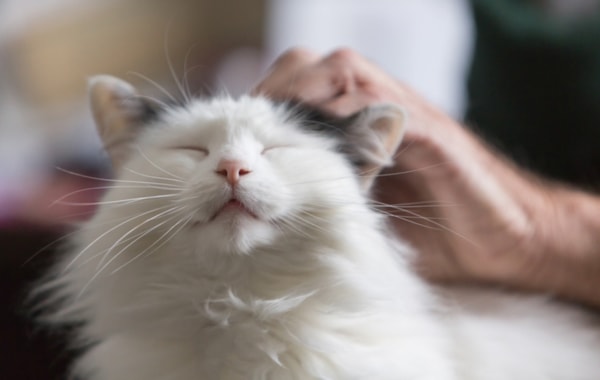 Dementia is recognized as an extremely common condition in elderly humans, largely due to the increasing number of people surviving into old age. Improvements in feline nutrition and veterinary medicine mean that the life expectancy of pet cats is also increasing; there are now more elderly cats than ever before. In the UK it is estimated that there are approximately 2.5 million 'senior' cats over ten years of age, amounting to about 30 per cent of the pet cat population.

Older cats commonly demonstrate changes in behaviour, with recent research showing such signs in 28 per cent of 11 to 14 year-olds and more than 50 per cent of cats aged 15 or over.

These signs may include:

High blood pressure - either primary or secondary to problems such as an overactive thyroid gland, renal failure, or diabetes - may affect a cat's behaviour if it is severe.

Liver disease can cause a build-up of toxic substances in the blood that have a detrimental effect upon the brain and thus the cat's behaviour. It may also make a cat feel generally lethargic and unwell, and so less willing to interact.

Reduced vision or hearing is common in older cats and may reduce the cat's level of activity due to him feeling insecure.

Brain tumours are not uncommon in older cats and can certainly affect behaviour. Some of them can be treated surgically or with drugs.

Infectious disease such as feline immunodeficiency virus (FIV) or coronavirus (the cause of FIP) can cause neurological signs that affect behaviour, but they are uncommon in older cats.

Dental disease may make a cat very withdrawn, and certainly reluctant to eat. Owners often comment on how much 'younger' their cat seems after a dental procedure has been carried out, because they had failed to notice how it had been dragging them down.

True behavioural problems can develop in older cats, just as in young ones, without being associated with any abnormal brain changes. Older cats become very set in their ways, and if something in their environment changes, it can trigger quite severe problems. Thus an elderly cat may become incontinent if his litter tray is moved to a new site, or the substrate changed to one that he does not like.

Similarly, moving house may severely affect an elderly cat who is unable to fight to establish a new territory, and so he may become withdrawn, and possibly urinate in inappropriate places because he is frightened to venture outdoors. The other 50 per cent are likely to be showing signs of a condition known as cognitive dysfunction syndrome, or CDS for short.

Work led by researchers at the University of Edinburgh Veterinary School examined the brains of older cats that had suffered from severe behavioural changes, and demonstrated that the changes that occurred were similar to those in humans with Alzheimer's. These are due to the build up of a protein called amyloid that collects as plaques between the nerve cells and inhibits messages from being processed by the brain. So what causes this problem? Just as with humans, we have some knowledge of the factors involved, but do not yet understand them all fully. It's possible that studies into the feline condition may also help us to learn more about the human disease.

The main causes are thought to be a reduction in the blood supply due to deterioration in the vessels to and within the brain, and damage to the brain cells themselves by agents know as free radicals. These are substances formed when cells burn up food substances to produce energy. The free radicals are normally mopped up quickly by the body's natural antioxidant defences, including a number of special enzymes and free radical scavengers, such as vitamins A, C and E. The balance between the production and removal of free radicals can be upset by disease, age and stress.

An excess of free radicals can lead to damage and the brain is particularly susceptible because it has a high fat content, a high demand for oxygen and a limited ability to repair itself.

Can we prevent CDS in cats?

It seems that the situation in cats is similar to that with humans. If humans and their cats live in a poor environment with little company and stimulation, they are both at higher risk of dementia, so when elderly people interact with their pet cat, it is likely to be beneficial for them both.

Environmental enrichment can lead to the production of hormones within the brain that stimulate the growth of nerve cells. The combination of environmental stimulation with human and inter-cat interaction, and food hunting games, together with a diet enriched with antioxidants are believed to act cumulatively together in improving cognitive function.

Treatment options for CDS in cats

Treatment for CDS is limited, but many of the other possible causes of the cat's behavioural changes are eminently treatable. Thus it should not be assumed that it is not worthwhile seeking veterinary attention for a cat with signs that might be attributed to advancing years, just on the basis that he is elderly. There is no specifi c treatment to cure the condition or reverse CDS, but there are three lines of support that may be of value:

Dietary modification: diets enriched with antioxidants and other supportive compounds such as vitamin E, beta carotene and essential fatty acids, are believed to reduce oxidative damage, so reducing amyloid production and improving cognitive function. There are several products on the market that are enhanced with such substances, and your vet will be able to direct you towards the ones that are most suitable for your cat.

Drug treatment: there are a growing number of possible drug options for treating dementia in humans, but there are no drugs licensed for the treatment of CDS in cats and none that have been proven to work. However, a number of drugs that have a beneficial effect upon brain function in dogs have been used 'off label' with varying degrees of success.

A limited trial in the US using the canine drug Selgian showed a positive effect on cats and the American Association of Feline Practitioners now supports the use of this drug for the treatment of CDS in the US.

Lifestyle: change should be kept to a minimum, and when it cannot be avoided it should be made slowly and with much reassurance. Some cats may become so demented and cope so poorly with change that they may benefit from having their area of access reduced in size, such as to a single room containing everything they need. This core territory can then be kept safe and constant.

Environmental application of a synthetic feline scent hormone, in spray or diffuser form, can also help in reducing feline anxiety. Sometimes, drugs to reduce anxiety used 'off-label' may also help in this respect.