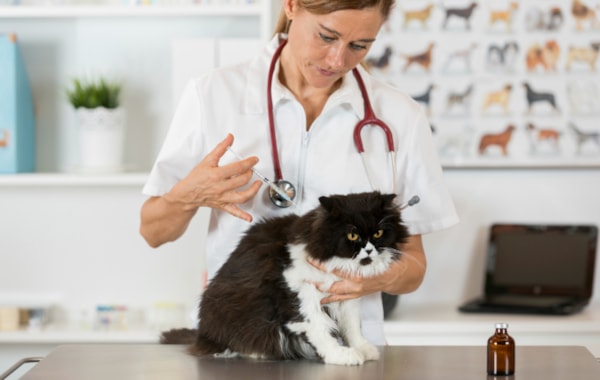 Feline leukaemia virus (FeLV) is a common and important cause of illness and death in pet cats. Cats that become persistently (permanently) infected with this virus are at risk of developing many severe illnesses such as anaemia and cancer. Between 80 and 90 per cent of infected cats die within three-and-a-half years of being diagnosed with FeLV.

The most common effect of infection is immunosuppression. The virus infects cells of the immune system (the white blood cells), killing or damaging them. This leaves the cat vulnerable to a wide variety of other diseases and infections (secondary infections). FeLV is a member of the same virus family as feline immunodeficiency virus (FIV).

Who is at risk?

FeLV is a fragile virus which is not able to survive for long in the environment, so spread of infection between cats relies on prolonged and close contact. For this reason, infection is most common in situations where there is a high population density of cats. It is estimated that 1-2 per cent of cats in the UK are infected with FeLV.

This figure tends to be higher in more densely-populated city cats and lower in rural cat populations. In multi-cat households and catteries where FeLV infection is endemic (constantly present in the household), up to 30 per cent of the cats may be infected. Young cats, particularly those less than six months old, are especially vulnerable to becoming persistently infected.

How is it spread?

The major source of virus is in saliva from a persistently infected cat. Virus is spread by activities where saliva is exchanged between cats, such as mutual grooming or sharing of food bowls. Alternatively, FeLV infection of other cats may be caused by biting or contact with urine and faeces containing the virus. It is also possible for virus to be passed from a queen to her kittens either in the womb, or after the kitten is born via infected milk. However, it is uncommon for FeLV-infected cats to give birth as FeLV usually causes pre-natal death of the kittens which results in resorption or abortion.

Not all cats which are exposed to FeLV become persistently infected. Either they have not been exposed to enough virus or their body's immune system is successful in eliminating the infection. The majority of cats become infected with the virus entering the body via the mouth or nose. The virus multiplies at these sites before spreading in the bloodstream to the rest of the body and in particular to the bone marrow.

If the cat is able to eliminate the virus, this will occur during the initial stages (four to 12 weeks) of infection. Once significant infection of the bone marrow is present, the cat remains infected for the rest of its life. Very rarely FeLV infection may be limited to certain parts of the body such as the mammary (breast) tissue. This is known as a 'localised infection'.

A variety of chronic and/or recurrent disease develops in cats persistently infected with FeLV. There is a progressive deterioration in their condition over time. Clinical signs are extremely diverse but include fever, lethargy, poor appetite and weight loss. Respiratory, skin and intestinal signs are also common. Cats may suffer from several illnesses at the same time. Anaemia occurs in about a quarter of infected cats. FeLV can infect the red blood cells in the bone marrow, causing a reduction in numbers of these cells or production of abnormal red blood cells which do not work properly. In other cases, FeLV may cause destruction of red blood cells by the cat's own immune system. Anaemic cats show clinical signs such as weakness and lethargy.

Cancer develops in around 15 per cent of cats infected with FeLV. The most common is lymphoma, a cancer of lymphocytes (a type of white blood cell), resulting in solid tumours or leukaemia (tumour cells in the blood stream). Solid tumours can be seen at various sites including the intestine, kidneys, eyes or nasal chambers. In multicentric lymphoma, the tumour involves multiple lymph nodes and other sites.

There is currently no treatment able to eliminate an FeLV infection. Treatment must therefore be aimed at maintaining quality of life and managing the effects of infection such as immunosuppression, anaemia and cancer.

Prompt and effective supportive care and management of secondary infections is essential in the ill FeLV-positive cat. Because of the failing immune system, much longer courses of antibiotics are needed.

The response to therapy is usually much slower and less likely to be successful. Relief of symptoms may be provided by non-specific therapies such as corticosteroids, anabolic steroids and multivitamins (which encourage appetite). Antiviral agents, such as AZT (azidothymidine), which have been used in people with HIV, do not appear to be beneficial in the FeLV-infected cat.

A further treatment called recombinant feline interferon has recently been licensed, and there have been anecdotal reports of its use in cases of feline leukaemia. At this point, the value of the drug remains somewhat controversial until further scientific evidence becomes available. Some cats with lymphoma may show temporary improvements when treated with cancer chemotherapy drugs. This usually involves a number of drugs given by mouth and by injection.

Cats with FeLV infection should not eat raw meat because of the increased risk of Toxoplasma gondii infection. This parasite is usually only a problem in immunosuppressed cats where it can cause uveitis (inflammation of the internal structures of the eyes), neurological signs such as seizures, and ataxia (drunken gait).

Vaccination, particularly for cat flu and infectious enteritis, is recommended for any cats staying in a high-risk situation such as a veterinary hospital or cattery. Flea treatment is recommended to minimise the risk of Mycoplasma haemofelis (a blood parasite which can cause anaemia) transmission. Routine worm treatment is also recommended.

Several vaccines are available for FeLV. The aim of these is to prevent cats exposed to the virus from becoming persistently infected. All of the vaccines aim to do this by stimulating a successful immune response to FeLV. Unfortunately, no vaccine is likely to be 100-per-cent effective at protecting against infection. Vaccination is recommended in situations where cats have a high risk of exposure to the virus. This includes free-roaming cats and those in contact with potentially-infected individuals.

It is unwise to assume that a vaccinated cat is necessarily free of infection, and where it is important to know the FeLV status of a cat (for example, introducing a new cat to a breeding colony), it is vital that a vaccination certificate is not accepted in place of a negative FeLV test. Vaccination of cats does not interfere with the FeLV blood tests. The lack of a totally effective vaccine means that it is also inadvisable knowingly to mix an FeLV-infected cat with a vaccinated, uninfected cat.

As the virus is highly infectious and readily transmitted by prolonged close contact, other cats in the household are at risk of becoming infected via mutual grooming and sharing of food bowls. Uninfected cats should be kept away from the persistently infected cat where possible. It is also recommended that FeLV-positive cats are kept indoors to minimise spread to other cats in the area. This may be difficult for some cats who will not tolerate being kept inside permanently. It is important to carefully weigh up the risks (to your own cat and others) with the welfare implications. ?It is feasible to fence in the garden or to construct a run where cats can go out, thereby preventing any risk to your own or other cats.

In the breeding cattery, the 'test and removal' system has been extremely successful at eliminating FeLV infection. This system relies on FeLV testing of all the cats with separation of any that test positive. After a period of 12 to 16 weeks, all of the cats are tested again as some cats initially testing negative may have been incubating the disease and some of those testing positive may have been transiently infected with subsequent elimination of the virus. Any cats repeatedly testing positive should be removed from the unit, while only those with two consecutive negative tests are kept. All new additions to the colony, whether vaccinated or not, should be tested for FeLV before joining the cattery. All cats in a breeding colony should be tested every six to 12 months in order to maintain the negative status of the colony.

As an aside, single cats that are confined indoors should not be at any risk of exposure to FeLV. It is however possible for an adult cat to succumb to disease from FeLV infection despite having spent his whole life since kittenhood isolated from other cats. This can be explained by the often protracted course of FeLV infection; if a kitten was infected by his dam prior to rehoming, the signs of FeLV infection may develop months to years later after the time of initial infection with FeLV. The risk of spread of FeLV at cat shows is minimal.

Whilst the results of a confirmatory test are pending, the cat should be isolated to avoid any possible risk of transmission to other cats.

The following test protocol is generally followed by vets:

Testing cats in the rescue situation

Ideally all cats entering a rescue centre should be tested for FeLV infection. However, this may not be feasible due to the cost implications involved. It is advisable to enquire whether a cat has been tested prior to agreeing to rehome it. A cat that has tested positive to FeLV should only be rehomed when all of the risks have been explained to the new owner.

The prognosis for a sick FeLV-positive cat is poor; the associated disease problems are usually serious. For cats that have been identified to be FeLV-positive but are healthy at the time of diagnosis, the prognosis is guarded. Most of these cats subsequently develop a fatal FeLV-associated problem - however, the time course for this to occur can be variable (months to years).

It is vital that these cats are isolated to prevent further transmission of FeLV infection to other cats and secondly to reduce the risk of the FeLV positive cat contracting infections; if that cannot be guaranteed, euthanasia should be considered.