How can I keep my cat safe at Christmas? 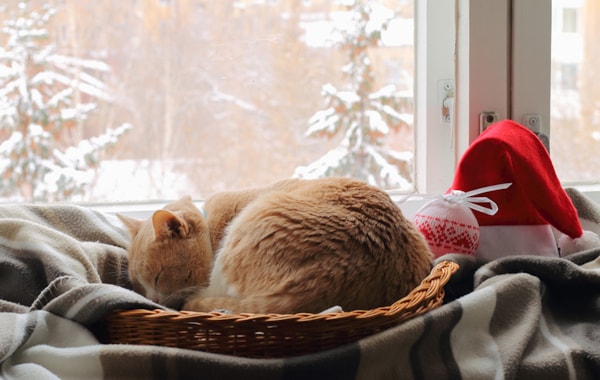 Battersea advises on how you can keep your cat safe over the festive period. Plus, take a look at our guide on keeping your cat safe, healthy, and happy during the Christmas celebrations...

For many people, Christmas is the best time of the year thanks to the rich food, gifts, decorations, cosy evenings indoors, and catching up with friends and family. Battersea Dogs & Cats Home warns that your cat may not feel the same way, however, as the things that make Christmas so great for humans can be distressing, or even dangerous, for our pets.

The cold, or sometimes freezing, weather can lead to a variety of problems for cats. Therefore, it is vital to make sure measures are in place to keep them happy and healthy throughout the cold months.

After spending time outdoors, there’s a strong chance that your cat will return feeling cold, and quite possibly wet. Dry him off and make sure you provide somewhere warm and cosy for him to curl up in — this is particularly important for older cats. During snowy spells, be sure to inspect your cat’s paws when he returns inside. Cats, particularly those with longer hair, are prone to getting snow trapped between their toes, which can compact and turn into small balls of ice, and cause discomfort and pain.

Even if your cat normally goes outside when nature calls, it may be worth considering providing a litter tray during the coldest months. This gives your cat the option to do his business in the comfort of his own home, without having to venture out into freezing temperatures if he doesn’t want to.

Some pets will be content to spend their usual amount of time outdoors, come rain or shine, while others may become more inclined to stay indoors a little more when the weather takes a turn for the worse.

A good way to keep your cat stimulated when he’s not spending as much time prowling around outside is to provide him with entertaining toys and games, such as a play tunnel, scratching post, or ball game.

Cars can pose several risks to cats, particularly during the cold, dark months towards the end of the year. Cats have a dangerous habit of crawling under car bonnets to enjoy the warmth from the engine so you should always tap the hood of a car before starting the engine. This will hopefully disturb any stowaways and encourage them to move onto a safer spot.

Moving cars also pose a danger as traffic conditions change due to lower visibility and increased traffic at certain times, particularly close to Christmas as shoppers and visitors take to the roads. If you live near a busy road, try to limit the amount of time your cat spends outdoors in the evenings and early mornings to avoid any potential accidents.

Owners should always be vigilant in preventing their cats from consuming certain food and drinks that may harm their pets. During the festive period, there is usually a higher chance of food being left within reach of four-legged opportunists who may try to consume something which they will later regret.

A lot of cats are lactose intolerant, so owners should keep human dairy treats, such as cheese boards and glasses of milk for Santa, locked away or well out of reach. Chocolate is another tasty treat that shouldn’t be left lying around for curious cats to sample — this includes advent calendars and tree decorations. Chocolate is poisonous to cats, even in the smallest of doses, and, if consumed, can cause seizures, heart problems, and kidney failure.

Other dangerous foods you’re likely to be using during the Christmas period include onions and garlic. Whether cooked or raw, the onion family can leave your cat with an upset stomach and is best avoided.

Just like humans, cats can become intoxicated by drinking alcohol. Unlike humans, however, as little as a tablespoon of alcohol can lead to serious health problems for cats, including liver and brain damage, so it is vital to keep drinks sealed and safely stored away during the festivities.

The danger of antifreeze

One of the biggest and most common dangers that cats face in winter when freezing temperatures hit is coming into contact with antifreeze, which can result in serious illness, or even death. Ethylene glycol, otherwise known as antifreeze, is a chemical commonly used during the winter to prevent freezing and is frequently used in car radiators, screen washes, and de-icers, as well as in garden water features to stop them freezing over.

Six-week-old kitten Tiny Tim (pictured above) was brought into Battersea in a bad way after coming into contact with a small amount of the dangerous chemical. Cats seem to be attracted to the taste of this chemical, which can prove deadly if they ingest in even the smallest amount.

Leaving antifreeze where cats can get to not only puts your pets at risk but also any strays or roaming cats in the area. Owners should be aware of any signs that their cat may have come into contact with antifreeze and take them to the vet’s immediately. Symptoms include vomiting, increased thirst, appearing sleepy or disorientated, frequent toilet trips, faster breathing rate, and seizures.

There are antifreeze products on the market that are safe for animals, and Battersea strongly recommends that everyone, not just pet owners, use the products which do not contain ethylene glycol to safeguard against future harm and distress for cats and other animals.

Read our festive guide on keeping your cat safe, healthy and happy during the Christmas celebrations...

The festive season presents its own set of perils for pets, as owners can forget to keep their wits about them when revelling in Christmas cheer. From tinsel to fairy lights, chocolate to over-indulgent dinners, nothing will ruin a Christmas for both you and your cat more than an emergency trip to your local vet clinic on the big day!

Spoiling your pet with love and affection (and maybe a new collar/bowl/toys) is always better than spoiling him with festive excesses, so avoid feeding rich foods and keep his routine intact if you want kitty to get through Christmas without a health hitch.

Cats eating Christmas dinner - There are lots of fatty foods around at Christmas, and many owners will indulge their cat during the holiday season. This is generally not a good idea. New foods given sporadically can, at best, lead to a bout of diarrhoea in cats - and at worst, serious conditions from gastroenteritis to pancreatitis. Keep it simple - stick to your cat's regular diet, perhaps consider some turkey breast meat, without the fat, on the big day to avoid tummy upsets. Read our cat nutrition advice.

Cats and Christmas trees - Your cat may enjoy your Christmas tree even more than you! Just be careful to watch for over-enthusiastic play when it comes to the lights, tinsel and other decorations - and pine needles if you have a real tree, all of which can cause injury to your moggy. It's best to exclude your cat from the room that the tree is in when you go to bed, just in case accidents happen while you're asleep.

Dealing with visitors - Most felines are not impressed by strangers, and yet there can be a great deal of coming and going over the Christmas period. Keep one room of the house visitor-free (generally a bedroom works best), providing food and litter trays in this location so your cat can withdraw from social engagements if he wishes to.

A change of scenery - Christmas is generally a fairly hectic period for most of us, but make sure you consider your cat's needs well in advance of the big day. If you are planning to go away, ensure that your preferred cattery or house/pet sitter is booked early, or work out the logistics of taking your cat along with you in a suitable cat carrier.

Ornaments plants, candles and tinsel - Holly, mistletoe, poinsettias are all popular plants to have in the home at Christmas. These plants, however, are toxic to cats so should be placed where your cat can't get to them. Candles are especially popular over the Christmas holiday period, but be careful to make sure your cat can't get close to lit candles. Tinsel can also pose a choking hazard to playful kitties.