How can I stop my cat visiting other people's houses? Discovering your beloved cat is eating snacks and enjoying fuss and sofa time at someone else’s house can cause more than hurt feelings. Read on to find out how to handle it.

As devoted cat owners it can be tough to discover that your furry friend is not as loyal and faithful as you thought they were.

We were surprised when our neighbours told us that our tabby cat Rita — who we thought only had eyes for us — would regularly stroll in through their back door when it was open during the summer months and enjoy a relaxing visit there and a bit of fuss. No harm done and if both parties enjoy each other’s company for a little while we don’t mind.

But what if your cat is being regularly fed by other people, or — the unthinkable — they want to live in someone else’s house instead of yours? 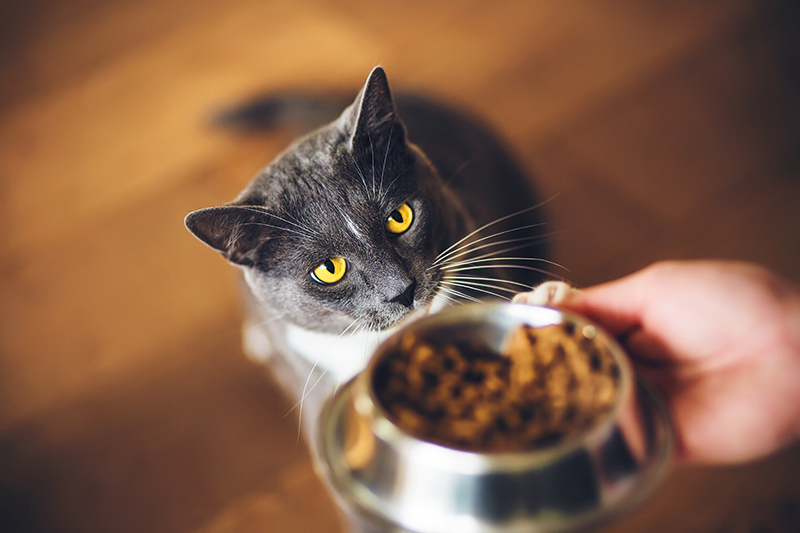 Your kitty being fed elsewhere can be problematic

There are some serious risks attached to cats being fed away from home. Animals on special diets could even have their lives cut short by eating extra food or the wrong type of food, says Cat Advocacy Programme Manager at International Cat Care Linda Ryan. Cats that have diabetes or a kidney condition are particularly vulnerable as it can upset carefully prepared dietary plans.

Linda, who is a Clinical Animal Behaviourist and Registered Veterinary Nurse, explains that if a cat is diabetic then getting extra food at the wrong time can cause problems, and if the cat then doesn’t eat at home, for example because they are full, the owner might not give them insulin because they see they haven’t eaten.

In either case, it could shorten that cat’s life, or massively impact their quality of life.

For cats with kidney disease, there are also serious risks. Linda says: “These cats need really closely managed protein and phosphorus intake and again, we now know that with long term kidney disease in cats, the most significant thing that we can do for them is to feed them the right clinical diet. And that is going to potentially increase their life by two to four times and that is one of the main management strategies without even using any medication.”

Eating something outside of the plan can cause big problems.

“We could have these animals not stabilising, needing to go in and out of hospital, waxing and waning problems and never getting control of it. Again, it could massively shorten that cat’s life, or impact their quality of life,” she said.

And even if the feeding doesn’t cause fatal complications, it can still lead to discomfort for cats if they have allergies. You may be feeding your pet an expensive, science-backed, nutritionally balanced diet, but all that good work can be undone by a handful of cheap treats from a well-meaning neighbour. For some cats it could mean they experience discomfort and itching leading to distress and even behavioural problems.
Linda says: “My little cat has dietary sensitivities and an allergy. If she eats even one piece of my dog’s kibble, she’s scratchy, she’s self-grooming all the time and it takes months to get stable again.”

That’s before we even consider the risk to otherwise healthy cats of obesity, which can also shorten life. We might think of cats as being fairly modest when it comes to food intake, but some of them really do love their dinner and will happily indulge in extra meals and treats.

“Obesity is a massive problem with our pets at the moment, particularly with our cats who are somewhat more sedentary in their lifestyles than they would be in a more active lifestyle, for example such as free-living cats might have.

“That can be problematic because obesity can lead to diabetes and make arthritis worse — it can shorten lifespan,” says Linda. 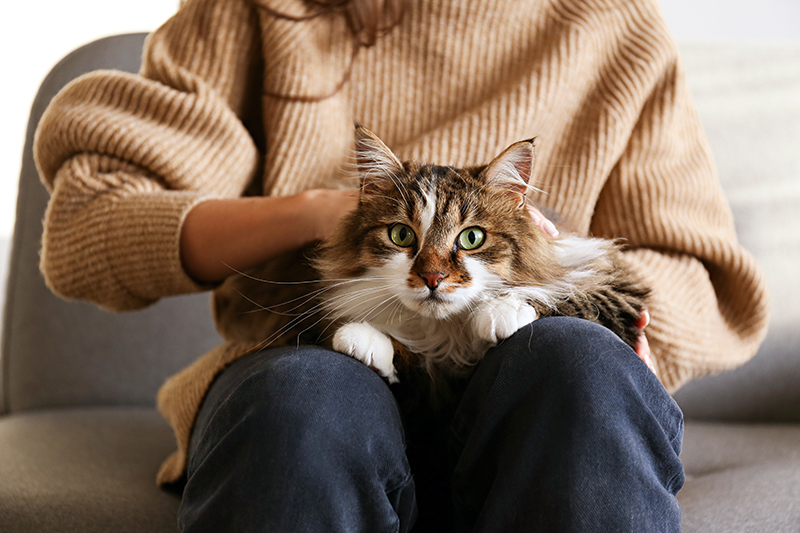 It can be distressing if your cat is enjoying someone else’s lap.

Not only that, but if cats are lured into unfamiliar territory by the promise of a nice lunch it can bring other problems. If the source of the food is at the other side of a busy road the risks are obvious and if it is within the territory of another cat, then that can create conflict for the cats to deal with. It can also be stressful for the cat if the new food source stops and starts, such as when the people feeding them go on holiday, for example.

Quite apart from the health and safety problems it causes, it can be upsetting for owners.

You may lose that connection with your cat because they’re having a more reinforcing time somewhere else.”

It’s likely that most people who feed other people’s cats mean well. Perhaps they think the cat is lost, or has no home, or maybe they just see no harm in giving a furry visitor a little treat from time to time.

Having said that, the cats themselves are also playing their part in the arrangement as many cats may want alternative places to relax and eat. For some cats, even the most loving home may be stressful for them at times. Noise, hustle and bustle, other pets, children, a new baby, a badly positioned food bowl — all these things can make cats uncomfortable, especially at mealtimes and so they may be drawn to an environment that they perceive as calmer and more comfortable for them.

If the situation at home is consistently problematic for the cat and the new home fits the bill better, they sometimes just leave altogether and move into somewhere new.

Make no mistake though, cats do not do this lightly. 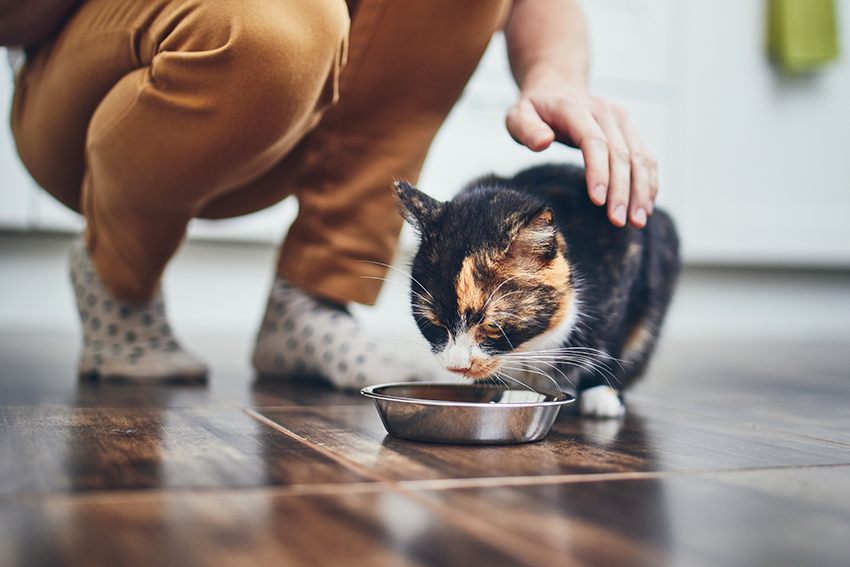 Cats on a specialist diet can suffer if they’re being fed elsewhere.

Linda explains that cats are highly attached to their home and territory and to leave and make a permanent move somewhere new is a big deal for them. They will do it though for a life that suits them better.

So, if you think your cat is eating away from home it’s important to assess whether there are aspects of your home life that could unintentionally be driving them away.

Linda says: “We want to make sure that they have plenty of resources and free access to them.”

Resources can be anything from food and water to litter trays, sleeping places, scratching posts and places to hide. Linda encourages owners to supply plenty of resources, at least one more than you have cats in the house and ideally, if your house is over several floors, to provide them on each level.

How you feed them at home is also important. In homes where there is more than one cat, Linda recommends they eat in separate places. She also suggests using a glass or ceramic bowl rather than a plastic one that may retain odours, and making sure the bowl is wide enough that it doesn’t press on their whiskers, causing ‘whisker fatigue.’

It may seem that there are many variables that could cause your cat to be unhappy with their homelife but finding the right thing could make all the difference.

RSPCA cat welfare expert Sam Watson agrees that this is important and if you can work out what your cat wants and provide it, it can help stop them going into other people’s homes.

She says it is important to try to read the signs your cat is giving you. It’s not always obvious though. “They haven’t evolved with us like dogs have where they can clearly communicate what’s making them happy or unhappy or worried,” says Sam. “With cats the cues are often a little bit more subtle, so it’s really important to pay attention to your cat. Look at their tail and their eyes, look at them to see are they happy right now, are they calm and relaxed, are they a little bit worried or are they frightened of whatever’s happening. It’s really key to having good interactions with cats that you learn to read what the cat’s telling you, because they will give clues.” 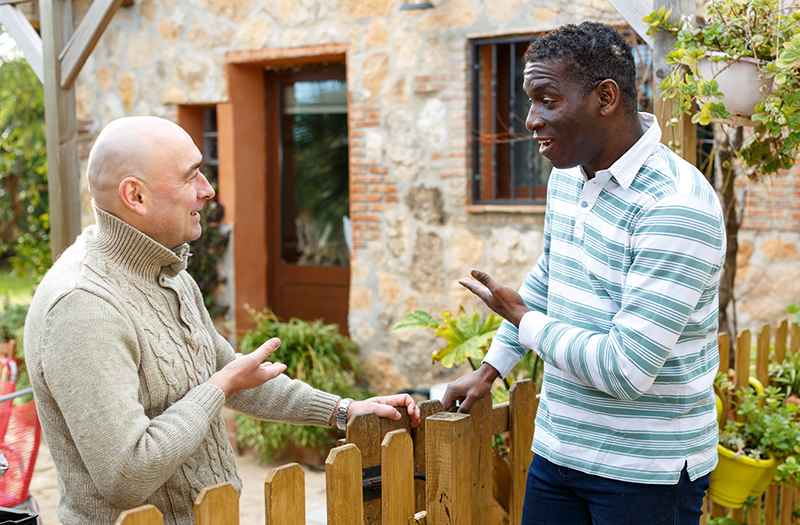 Talk to your neighbours if you’re concerned about your kitty being fed elsewhere.

How do I stop someone else feeding my cat?

If you know who is feeding your cat, pop round and have a calm and friendly chat. Explain that your cat is on a special diet and shouldn’t be allowed extra food. Even if your cat is not on a specific vet-prescribed diet, you are still entitled to choose how your cat is fed and becoming obese would be a problem for any cat.

If you don’t know who is feeding your cat, try posting a picture of your cat on your neighbourhood Facebook group, or put up a notice explaining that she has a loving home and shouldn’t be fed elsewhere.

Add a paper collar that explains that your cat shouldn’t be given extra food. Make sure any collar you attach is quick-release and any tags are suitable for cats and won’t be a hazard to them. 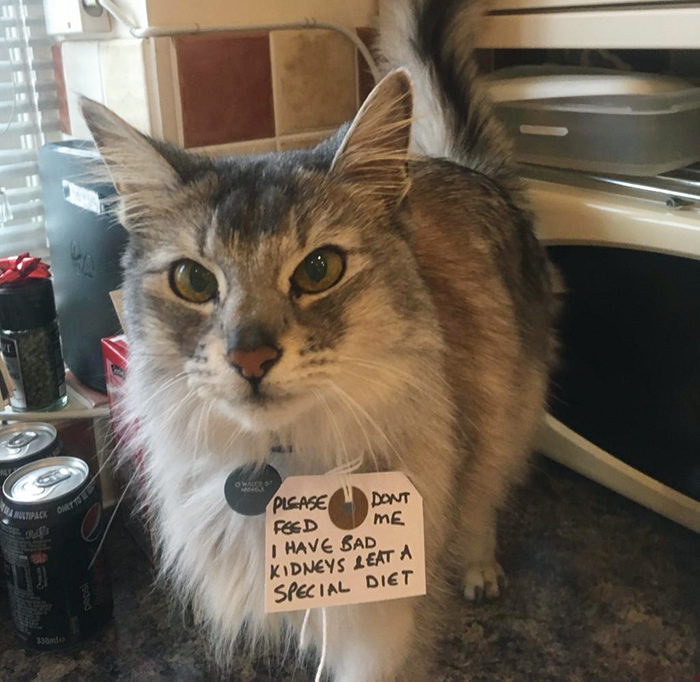 Rooky with the note on his collar.

Deborah Forbes, from Northamptonshire, discovered her cat Rooky, who had kidney disease, was being fed by a neighbour. She found a simple way to successfully resolve the problem.

“Rooky was a real character; he was super friendly and loved everyone and I know that he liked to visit our neighbours to say hello and get some fuss.

“He had kidney disease and although he was well day to day, he needed a strict diet of special food to prevent strain on his damaged kidneys. Cats with kidney disease can be rather skinny and may have rather unkempt fur so can look as though they are underfed or not cared for. They can be sick quite frequently and I began to notice that Rooky was coming in from his morning trip around the neighbourhood and sicking up white fish. I wasn’t feeding him fish as that wasn’t part of his diet, so I thought that one of my kind neighbours was giving him a treat. 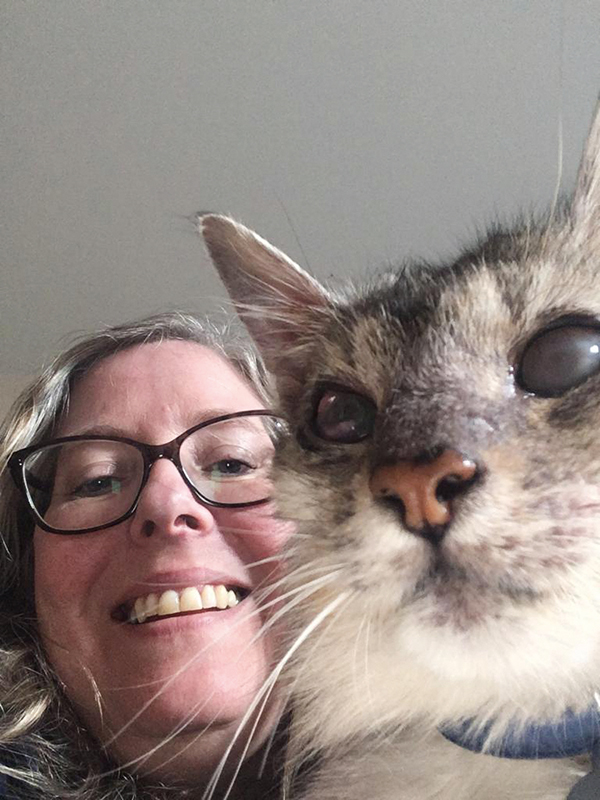 “I wasn’t sure which neighbours he visited or how far he went so I wasn’t sure what to do. After some thought, I decided to put a label on his collar to let people know not to feed him as he had a special diet — it worked!

“A couple of weeks later a neighbour passed me in the street and said she’d been feeding Rooky as he came for a visit most mornings when she was feeding her cats and it felt mean to not give him anything, but now she knew then she wouldn’t feed him. We had a good laugh about what con artists cats can be.

“Sadly, Rooky died a few months later and I miss him every day.”

You can download and print out a paper collar from the RSPCA website which you can use to send a message to the person feeding your cat. You can also use it if you are being visited by a cat and you want to check if they have an owner. Visit www.rspca.org.uk/adviceandwelfare/pets/cats/straycats to download the collar printout.