Is my cat getting enough sleep? Sleep is an incredible regenerative force and cats are renowned for their ability to snooze. But what are the signs that our feline friends are actually getting good sleep?

One of the most important essentials for making sure your pet has a happy and healthy life is often overlooked: plenty of snoozing. Just as with us, getting enough sleep is absolutely key to good physical and mental health, and it can play a part too in the bond you have together.

Sleep affects almost every single type of tissue and system in the body, from the brain, heart, and lungs, to immune function, disease resistance, and metabolism, to mood, memory, and learning processes.

Cats are Olympic champions when it comes to sleeping! On average, an adult will snooze for around 15 — 16 hours each day. Your cat only spends around 25 per cent of that time in deep sleep however; the rest of the time he is dozing, still resting but alert enough to rouse at a moment’s notice. Kittens and seniors spend even longer sleeping, as much as 20 hours within a 24-hour period.

The reason why cats sleep so much is thought to be the legacy of feline evolution, physiology, and nutritional habits: hunting prey uses a lot of energy and taking a nap between meals conserves energy and helps the body to recharge.

Too much or too little?

How much time your cat spends sleeping varies between individuals as well as according to age. An energetic cat who has had plenty of stimulation and activity may nap for longer periods; sleeping time also tends to increase on cloudy, cold, and rainy days. However, sudden changes in sleeping patterns can be a sign that there’s a health issue, especially if you also notice changes in behaviour. If you notice that your cat is sleeping either more or less than usual, consult your vet.

Cats are crepuscular — that is to say that they are most active at dawn and dusk. Most adapt their sleeping schedules to their humans, but some will be at their liveliest at those times when you either want to go to bed or don’t want to be woken up in the morning. They are also what is known as polyphasic sleepers; rather than sleeping for one long period like us, they have multiple sleep periods. 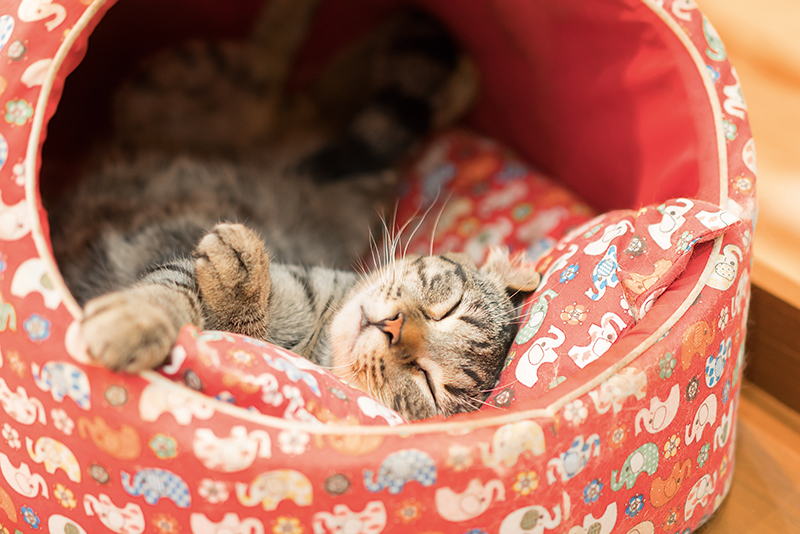 Yes, they do! Like us, cats cycle through different stages of sleep, experiencing both non-rapid eye movement (NREM) and rapid eye movement (REM) sleep. Studies reveal that during the NREM stage your cat is in light sleep, ready to wake for action almost instantly should he need to. This stage may then be followed by a period of alertness, then drowsiness and more NREM sleep, cycling through them several times before moving into REM sleep.

While he’s in REM sleep you may see your cat twitching his paws and whiskers, and spot his eyes moving both horizontally and vertically behind his closed eyelids. In humans, REM sleep is linked to dreaming and it would seem cats and other animals are no different, with studies showing them appearing to act out their dreams while in this stage.

Again, like humans, some cats snore while sleeping. It occurs when air cannot move freely through the nose and throat, making the tissues vibrate. Overweight cats are more likely to snore than slim ones due to fat build-up around their upper airways, which narrows their oxygen intake. Short-nosed breeds, such as Persians, Exotic Shorthairs, and Himalayan cats, also have more of a propensity to snore because the shape of their heads can result in narrowed nostrils, nasal passages, and nasopharynx.

Respiratory infections, allergies, or a foreign body, such as a grass seed trapped in the nose, can also be a cause of snoring. If your cat is normally a quiet sleeper and suddenly starts snoring, ask your vet to check him out. 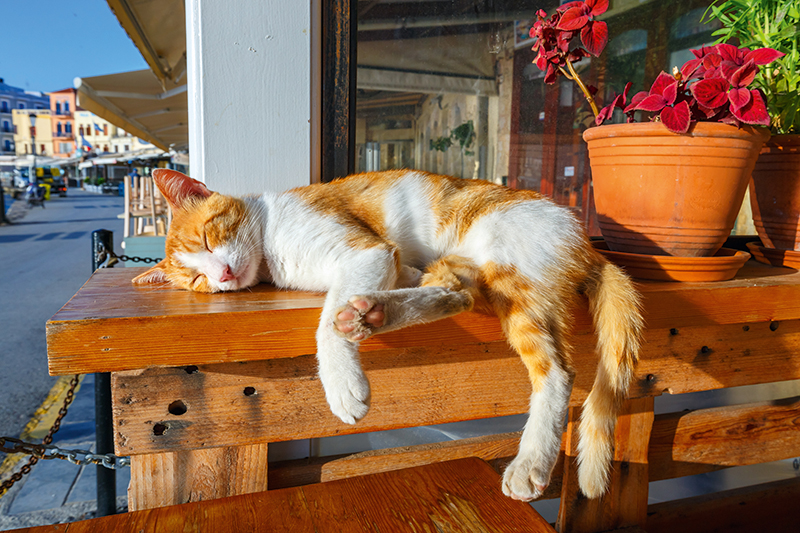 Cat owners will be familiar with the scenario: you get out your laptop, switch it on, and immediately your cat magically appears out of nowhere and nothing will do but that he takes a nap on it. It can’t be that comfortable, so why do they do it? There are various theories, including being drawn to the flickering screen, marking it as their property, because it’s warm, attention seeking, because it smells of you, or even that the keypad makes an interesting toy. Take your pick!

Cats have the ability to get comfortable in the most awkward looking spots, and in a wide range of sleeping positions, many of which look uncomfortable to us. The posture they adopt can be a yardstick of health when taken into consideration with other physical and behavioural indicators. A cat that adopts the ‘loaf’ position for example, with paws and tail tucked in, is usually thinking about (or taking) a brief nap; a sick cat rarely sleeps like this unless he is worried about falling into a deep sleep — maybe he’s feeling off colour and vulnerable, or is worried about a new arrival in the house. If he’s constantly sleeping like this, he’ll only be dozing and not getting enough of the deep sleep he needs.

If your cat sleeps in a variety of positions, it’s likely that he’s fine; it’s when he adopts one sleeping position all the time that warning bells should ring, suggesting that he is maybe under the weather and needs a vet check.

A cat sleeping with one or both eyes open may be absolutely fine; but if he does it a lot, it can be a sign of feeling unwell as he won’t be able to manage more than a light nap like this.

Beds come in all shapes, sizes, colours, and fabrics, and at prices to suit all pockets, from bargain to high-end. But just as you have personal preferences about bed mattresses, so do cats and these may be liable to change as they grow older and become less mobile, or at any time in his life if there are health issues.

However, as author Eleanor Farjeon famously observed in her well-known poem: “Cats sleep anywhere!” so don’t be offended if your cat doesn’t spend all his sleeping time in the bed you’ve purchased for him. Felines like to vary the places where they rest. This is thought to be a survival instinct which has been passed down to domesticated cats from their wild ancestors. Most will tend to gravitate to areas that are quiet, afford a degree of privacy, are warm, and draught-free.

Some nervous cats may appreciate an ‘igloo’ type bed that increases his sense of security, others might prefer a high area like a cat tree to sleep on. A survey of 1,177 cats found that most of them had five preferred sleeping areas around the house.

Changes in the home — visitors, a second cat, new furnishings (or even just moving the old ones) — can make your cat feel anxious and unsettled, and may lead him to search out new hiding places to sleep in. 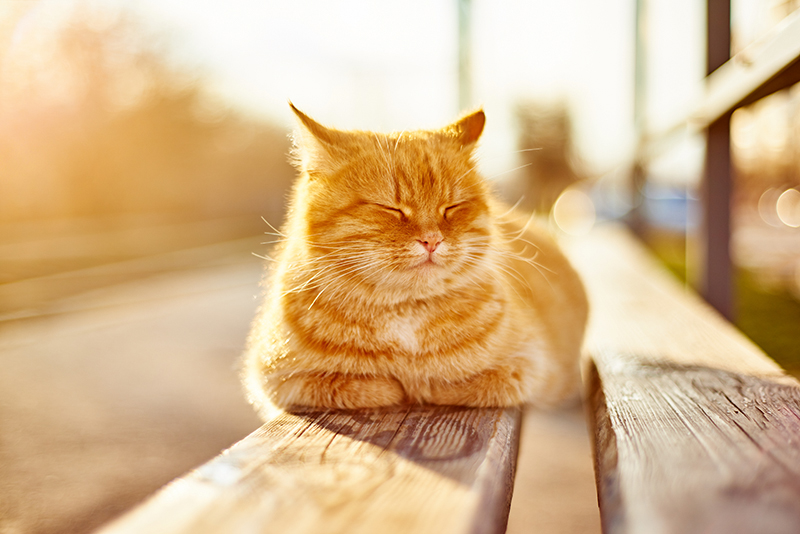 According to polls, over half of all guardians share their beds with their cats — but don’t start doing it if it’s not a habit you plan to continue. Suddenly shutting your cat out of the bedroom after he’s grown accustomed to being allowed access can lead to him becoming frustrated and even destructive.

There are pros and cons for having a furry bedfellow; on the plus side, it’s said to strengthen the bond between you, and to help you both feel safe, calm, and relaxed — important factors in being able to enjoy quality sleep time.

The downside is that some cats may disturb your own sleep! There may also be potential health risks including exposure to bacterial infections, debris from the litter tray being tracked into the room, and parasites, so regular grooming, parasite treatments, and changing your bedding is important if you want to share the pleasures but not the pitfalls of bed sharing. 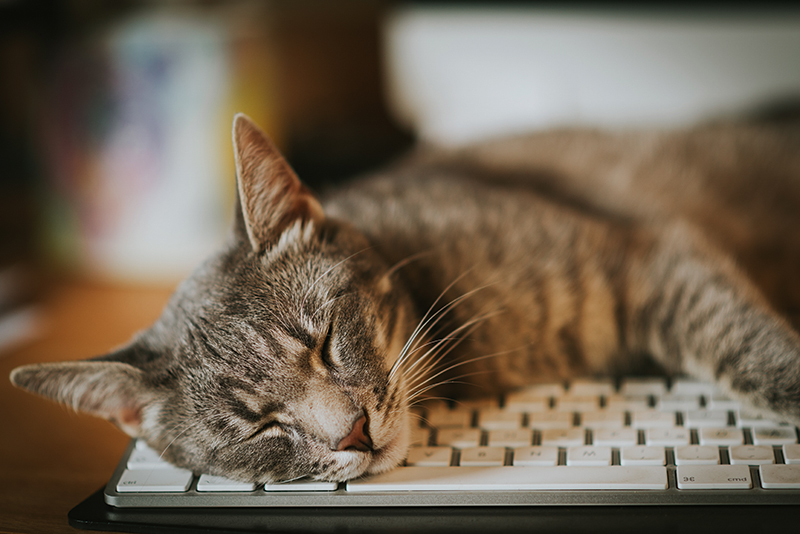 The prophet Mohammed is said to have cut off a sleeve and Nobel prize winner Albert Schweitzer to have written prescriptions with his right hand (he was left-handed) so as not to disturb their cats who were sleeping on their arms. They obviously knew what they were about — just as it’s wise to let sleeping dogs lie, it’s best not to interrupt your cat’s slumber. Especially if in a deep sleep, they may be disoriented if woken abruptly and might react defensively; he could at best give you the cold shoulder!