Should I vaccinate my cat? 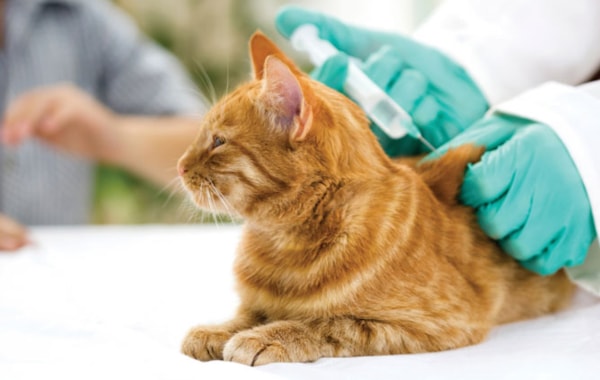 Not sure whether you should vaccinate your cat or not? Vet Dr Bradley Viner shares his advice.

Vaccinations - to have them or not?

Vet Dr Bradley Viner says why on earth not...

Vaccines work by introducing an agent similar to the actual infection that stimulates the recipient's immune system to protect it against disease.

Some mild reactions can be considered a normal part of the vaccination process. These are much less frequent than they used to be as vaccine technology has moved on, but can include an animal being off-colour for a day or two, or tenderness and swelling at the vaccination site, and generally do not need any treatment.

Similarly, acute allergic reactions to the vaccine are also now very rare because vaccines have become much purer and so less likely to trigger a response. They most commonly involve fluid swelling of the face and/ or limbs that come up quickly after vaccination. In the most severe of cases acute anaphylactic shock can occur, where the animal develops breathing difficulties and collapses. This type of reaction usually occurs very quickly after vaccination, and immediate veterinary attention should be sought.

Many longer term reactions have been suggested but never proven, because it is really difficult to prove a cause and effect relationship - when so many animals are being vaccinated, a proportion will become unwell in the period afterwards just due to statistical probability.

There is a significant amount of well-intentioned but potentially very harmful scaremongering about the risk of vaccinations in pet animals, but diseases that are thought to have been brought under control by longterm vaccination programmes will quickly rise up again if the level of protection in the population as a whole is allowed to lapse.

A parallel situation was seen recently in human medicine, where research that has now been completely discredited, proposed a link between the MMR vaccine (measles, mumps and rubella) and autism. As a result, many parents refused to vaccinate their babies, and there have recently been several serious outbreaks of these diseases in the UK. Sometimes doing nothing may seem the safest option, but may turn out to carry the greatest risk.

A specific issue in cats that can occur is an injection site sarcoma, a type of cancerous tumour that can develop in response to any injection under the skin.

Any swelling that persists for more than a few days at the site of an injection should be checked over by a vet. Severe reactions such as this are thought to occur in approximately one in every 10,000 cats vaccinated.

A Suspected Adverse Reactions (SAR) Surveillance Scheme (SARSS) is run by the Veterinary Medicines Directorate for licensed veterinary medicines (see www. vmd.defra.gov.uk). Less than one adverse reaction for every 10,000 doses sold relate to vaccines, and of these only three per cent report the possibility of an associated injection site sarcoma.

Also known as feline panleukopenia virus, this can be responsible for a severe and often fatal form of gastroenteritis. Once a major killer of cats, thanks to a highly effective vaccine developed in the middle of the 20th century, it has now become a much rarer condition.

Affected cats typically show signs of severe vomiting and diarrhoea, but the disease may be so severe as to cause sudden death with no other signs. The virus can survive for long periods in the environment and thus it is important that all cats are vaccinated against this disease. A single injection will protect for at least three years.

Two viruses, feline herpesvirus and feline calicivirus (FCV), are responsible for most cases of cat 'flu, or acute upper respiratory tract disease. These viruses are extremely common, and infection results in sneezing, nasal discharge, conjunctivitis, ocular discharge, mouth ulceration and a sore throat. Following infection many cats remain carriers of these viruses (although they may no longer show signs of disease), thus acting as a source of infection for others. The viruses don't survive for long in the environment so infection is usually acquired through close contact between cats.

Vaccination against these viruses is vital in protecting cats or reducing the severity of disease in cats. However, vaccination does not necessarily prevent infection with these viruses (partly because there are many different strains of FCV), and vaccinated cats can also become carriers of the viruses and pass them on to others.

All the product licences issued in the UK for these vaccines recommend annual booster vaccinations, although the WSAVA suggests that this may be needed less frequently. The problem is that when a vet in practice works outside of the licensing regulations they may lay themselves open to challenge if problems subsequently develop.

Some are able to fight off an infection, but cats that remain infected with the virus generally die or are euthanized within three years of being diagnosed with the infection, due to damage to the immune system, progressive anaemia, or the development of tumours (lymphoma).

As it is only spread through close contact, cats that live largely isolated from other cats may not need this vaccination, although most cats in the UK are now vaccinated against feline leukaemia virus.

Many UK vets would consider this vaccine to be core, and it is thought that widespread vaccination has resulted in a dramatic reduction in the incidence of this serious condition.

This bacterium is probably most familiar to pet owners as one of the causes of kennel cough in dogs but it can also cause upper respiratory tract infection in cats. It is not generally considered to be a common cause of significant disease as infections are usually self-limiting and respond well to antibiotics.

An effective intra-nasally administered vaccine can be used if situations arise where it is considered important to protect cats, such as when there has been an outbreak of the disease within a cattery.

This is a type of specialized bacterium that mainly causes conjunctivitis. It is very fragile and cannot survive in the environment, so is transmitted by direct contact between cats. Infection is most common in young cats from multi-cat households.

The chlamydophila vaccine does not necessarily prevent infection with the organism and thus mild disease can occur in a vaccinated cat.

The major alternative to vaccination is not vaccinating and treating any disease problems if they occur. As many of the diseases that we vaccinate cats against are viral, antibiotics are ineffective and treatment mainly involves supportive care. This may be an option in cats that live a very sheltered lifestyle, particularly if elderly or where the stress of vaccination may be more likely to cause harm.

One option that I would advise strongly against is the use of homeopathic nosodes. Although there is no likelihood that they will do any harm, there is absolutely no evidence that they have any effect in controlling disease.

If you have any issues that you wish to discuss regarding vaccinating your cat, speak to your vet.