The difference between play for Indoor and Outdoor Cats Can you tailor play to suit both indoor and outdoor cats? This month’s feature in Clare Hemington’s Power of Play series shows that yes, you can!

I expect you’re wondering how I can write a fully formed article about the differences between play for indoor and outdoor cats; after all, it’s obvious isn’t it? Indoor cats require more of it and outdoor cats not so much.

But while in essence this might be the case, it’s probably over-simplifying things a bit. So, in this month’s ‘Power of Play’ feature I’d like to investigate this in a bit more depth. When it comes to play, what opportunities should you be offering your indoor cat and why? Likewise, what amount and types of play do outdoor cats really need?

What do studies say?

Although only about 10 per cent of pet cats in the UK are believed to live permanently indoors, studies show that this figure is increasing, and with an estimated 10.7 million pet cats living in the UK in 2021, by my calculations this means approximately 1.7 million are kept indoors.

In the outdoor world, these cats would be indulging all their natural behaviours such as seeking out prey to pounce on, throw around a bit, and ultimately kill. Unless the challenge and stimulation associated with these behaviours can be replicated indoors cats can become frustrated, bored, depressed or generally stressed, and will find other activities to pass the time such as sleeping and eating.

In addition, cats that lead a restricted lifestyle with little or no challenge are more likely to develop behaviours that can have serious consequences for them and their owners. These can include over-grooming, aggression, house-soiling and urine spraying.

But can playing with your indoor cat help minimise the risks of problem behaviours developing?

In 2014, a study was conducted with 277 owners of indoor cats. It showed that on average, each cat was provided with seven toys, mostly furry mice, toys containing catnip, and balls with bells. The majority of owners left the toys out for their cat all the time and over half reported playing with their cat more than twice a day, with the play sessions lasting from one to 10 minutes. Interestingly, owners who reported playing with their cat for sessions of five minutes or more reported fewer behavioural problems than those with play sessions of one minute.

What this study appears to demonstrate is that there is a direct relationship between the amount of time you spend playing with your indoor cat and his or her emotional health.

Of course, there are additional factors that need to be taken into account including how many other cats are living in the home and their relationships, and the character of the cat.

By giving your indoor cat appropriate outlets for play you can help fulfil his need for stimulation and challenge while giving him the opportunity to perform natural predatory behaviours. As indoor cats have a generally more sedentary lifestyle than their outdoor counterparts, you might also be helping your cat to shed a few unwanted pounds.

Activities that get him running, jumping and pouncing are really important. In addition to all the physical health benefits they provide, when your cat plays these types of games feel-good endorphins are released which will give him a lovely sense of well-being, just like how you might feel after a work-out at the gym or a long walk. 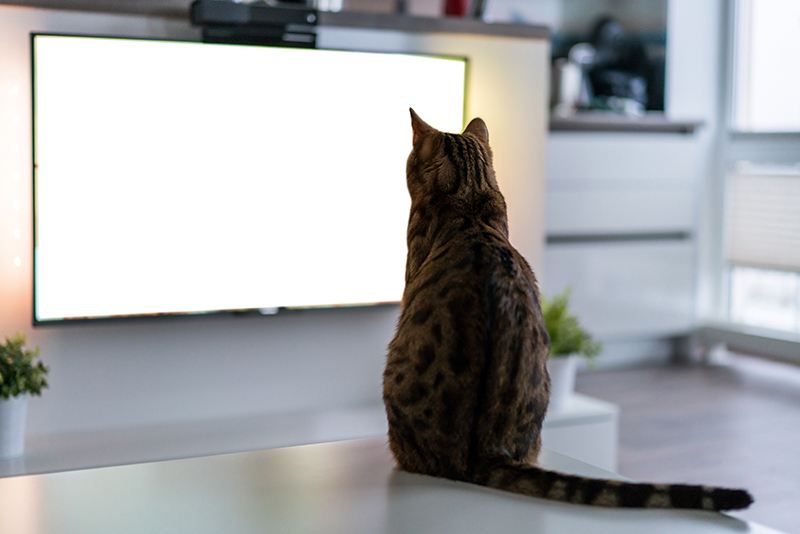 Bringing the outdoors in

I would suggest using toys that mimic the look, feel and movement of a cat’s natural prey. Fishing rod toys with feathers on the end can be ‘flown’ around to replicate a bird or, if your cat is frightened by this type of movement, you could take the other end of the rod, place it under a rug or any other item on the floor, with just its tip showing. Then slowly withdraw the tip so that it’s hidden then randomly reveal different lengths of it from different angles. Granted, this probably doesn’t look like any prey that your cat has ever seen, but in my experience, it seems to do the trick. Likewise, you can attach a feather or any small toy to the end of a shoelace or piece of string and trail it across the floor, allowing it to ‘stop’ momentarily just as his prey would.

Ideally indoor cats should be played with at least twice daily with sessions lasting as long as your cat is interested! Once his enthusiasm starts to wilt, it’s time to stop the game.

Cats also enjoy playing alone with toys they can pick up, toss in the air, and pounce on. To maximise the chances of your cat liking at least one of the toys he’s given, it’s a good idea initially to provide a variety. You’ll soon learn which types of toys he predictably favours and those which don’t float his boat. Toys that are covered in real fur can be a good alternative to what your indoor cat might find outside, or if this is a step too far, then there are some lovely realistic faux fur-covered toys available. Scent-enriched toys such as those containing catnip, valerian, silver vine and Tatarian honeysuckle, can give your cat a temporary ‘high’ and after what is usually a frenetic session either drooling on, kicking, or rubbing the toy, it’s not unusual for a cat to indulge in a lovely natural and deep sleep. Whatever toys you make available for him, ensure that you rotate them daily so that his interest in them is maintained.

While your cat might be able to view the world outside through a window, these days he can also experience his prey at close hand through the plethora of wildlife videos now available online that are designed especially to pique your cat’s interest. Turn the volume up and let your cat absorb the movements and sounds of a vast variety of furry and feathered creatures. However, it’s important that the video is removed if your cat starts displaying any signs of frustration such as looking for the prey behind or under the device.

To stop boredom setting in when you’re out of the house, try leaving items out for him that he can explore, such as cardboard boxes with a treat, pinch of catnip, or toy in, a ball that he can chase around the bathtub, and treats for him to forage for. The treats can be placed around your home, inside egg boxes, yoghurt cartons, toilet rolls, cut-down cereal boxes, or loosely wrapped in greaseproof paper. Remember, it’s very important to keep an eye on your indoor cat’s weight, so make sure any treats are incorporated into his daily allowance of food. 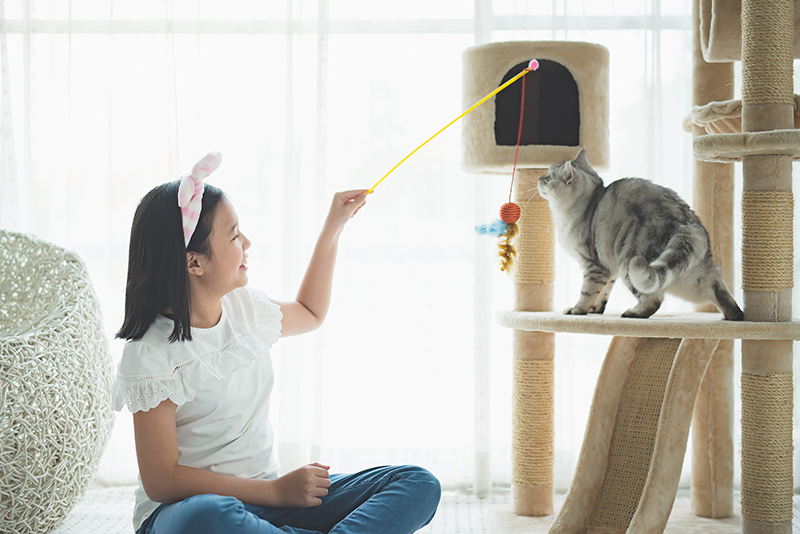 Toys that mimic prey are good for a cat’s hunting instinct.

With the wind in their fur and grass between their toes you might think that these cats need little in the way of play when they are indoors. After all, the outdoors is a big and interesting space to explore, filled with different smells, sights, sounds, tastes, and textures and one in which they can express all their natural behaviours through hunting, climbing trees and fences, and through engaging, for better or worse, with neighbouring feline residents.

However, the truth is that not all cats that can go outside want to go outside. Some less confident cats feel anxious in the outside world, especially if they know there’s a bully boy (or girl) cat lurking, ready to ambush them at any given opportunity. Likewise, older cats might eschew the charms of the outdoors for the security of their inner sanctum. And even if your cat is the Ernest Shackleton of your and your neighbour’s gardens, come winter they might be just as likely to abandon their outdoor hidey holes in favour of a nice spot inside next to a warm radiator. Or you might have a cat that spends an inordinate amount of time outside, lulling you into believing that he is getting all the activity he needs. In reality however, he might just be sampling the delights of your neighbours’ homes, each of which is happy to spend time indulging their furry visitor. I know a cat called Angus who does exactly that.

And if you spend all day out at work, leaving your cat to come and go as he pleases through the cat flap, you’re not going to know how much or how little time he actually spends outside, or for how long, unless of course you’ve got a ‘smart’ cat flap that tells you all about your cat’s comings and goings via an app on your phone.

For these reasons it’s still a good idea to make sure your outdoor cat is given appropriate opportunities to play when he’s inside. Additionally, playing with your cat and supplying him with toys will help ensure that he associates being indoors with fun activities and this means he is more likely to want to return when he finishes each outdoor adventure. Finally, spending quality time playing with your outdoor cat can be a lovely way to strengthen the bond between you.

The guidelines I mentioned earlier in relation to types of play and types of toys for indoor cats, equally apply to outdoor cats. And while it might be that your outdoor cat wants to play less frequently or for shorter periods of time, if your cat has a high play drive it’s possible that he’ll need every bit as much play enrichment as an indoor cat. My take-home piece of advice is be guided by your cat.

So, whether your cat is indoor or outdoor, keeping him occupied through play is not only great for his emotional and physical health but is interesting, challenging, and fun for both you and him.