My cat is traumatizing my new cat! With her cats at loggerheads, Wendy Hunter turned to behaviourist Peter Neville to help restore the peace.

(Q) World war three is raging in our household! Our ginger adult cat Loki is being a monster towards our new black female Meera. Loki will seek out Meera to pounce on her and she is now completely traumatized. I would really like your advice on how to resolve this conflict.

(A) Behaviourist Dr Peter Neville says: When your cats don't get on, it affects absolutely everyone in the house, as poor Wendy had found out.

Loki was a strapping young ginger cat who had been rescued by Wendy when he was just four weeks old. After spending a few days at the vet being treated for dehydration, Loki came home and soon became king of the castle. 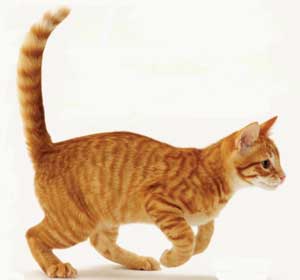 He was an only pet who thrived on human company, and Wendy was his favourite person. However, that devotion didn't stop him from visiting the neighbours' beds when he was allowed outside!

Since most of the neighbours knew Wendy, nobody minded their 'time-share cat' visiting, but when one neighbour moved out and a new family arrived trouble started. The new neighbour was allergic to cats and wasn't impressed with Loki's assumption that this house also belonged to him.

While they agreed to cat-proof their house and shoo Loki away, Wendy also decided to try and encourage Loki to stay at home more by getting another cat to keep him company.

Meera was duly adopted from a local charity where Wendy had been assured that she was a very friendly cat who got on well with other cats.

Unfortunately, Wendy's good intentions were not at all well appreciated by Loki, who chased and pounced on Meera from the moment she arrived. Meera didn't know what Loki's problem was, and kept trying to make friends. She clearly had no idea that cats vary a lot in their willingness to be sociable with each other. After two weeks of this behaviour, both cats seemed to be very unhappy.

I observed Loki and Meera during my visit, and one thing became clear almost immediately. Loki wasn't actually being aggressive towards her, he was just completely clueless about how to play with another cat. Having always been an only cat, he didn't know how to interpret Meera's signals of friendly intent, and he was so excited about the moving target living in his house that he couldn't help but pounce on her whenever she moved around.

If Meera was lying still on the sofa, Loki would often try to approach and sniff her, and Wendy had noticed them actually lying on the sofa together, albeit it at opposite ends. Meera had even managed to groom Loki a little when he was half asleep, but as soon as she walked in front of him, Loki would ambush her.

He would sneak up on her, kicking and biting whichever part of her he could reach. Meera never retaliated except for a surprised hiss, although when Loki let her go she'd run away and hide. This was what upset Wendy the most. She didn't want her new cat to be unhappy, but she also didn't know why Loki seemed to have developed a Jekyll and Hyde attitude towards Meera.

I explained to Wendy that Loki and Meera had a communication problem. Since Loki didn't grow up with other cats and never learnt to 'speak cat', he had no idea how to play appropriately and he also didn't know how to initiate interactions with Meera.

Thankfully, he wasn't really trying to hurt her, he just needed to learn to play gently and how to understand what Meera was trying to tell him. Since play in cats often revolves around hunting type chase and pounce behaviours, Loki was using the only behaviours he knew on his new companion.

I started by asking Wendy to initially supervise all interactions between the two cats. This meant keeping Meera in a separate part of the house until Loki learnt how to play properly. I didn't want her to get defensive or start attacking him because she disliked him. I also didn't want Loki to continue rehearsing his current set of behaviours! 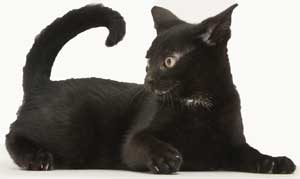 Thankfully, Wendy's house was set up in such a way that we could quite easily keep the two cats apart during the day when she was at work.

Next I suggested introducing scratch posts and cat-friendly toys into the environment. Wendy had to teach Loki how to play using fishing rod-type toys, toy mice and scrunched-up balls of paper that he could chase around.

Wendy's homework was to teach Loki how to play using just the toys - and nothing else. I also employed a bit of clicker training with Loki to teach him the 'leave' cue. Clicker training works really well with cats if you make the effort - it's definitely not just reserved for dogs!?

I also asked Wendy to heap calm praise and gentle strokes on Loki and Meera when they were lying together or just being relaxed in each other's presence. Since both cats enjoyed being groomed, this was another activity we could introduce when they were together.

Wendy would give them each a brush while the other cat was nearby. If anyone started getting rowdy, that cat was then removed and placed in another room until they were both calm again and could be reintroduced.

After two weeks, I went back to Wendy's house to help her bring Loki and Meera together for their first official play session. Loki had not had the opportunity to pounce on Meera for two weeks as Wendy was really careful and had done all her homework diligently.

I could immediately spot a difference in their behaviour - both cats were much more relaxed, and while Loki still eyed Meera when she walked away, he responded beautifully to Wendy's 'leave' cue.

He still needed to learn to play with Meera instead of using her as a toy though, so this session was really important. We started with the fishing rodtype toy, dragging it past each cat and getting them engaged in chasing it.

Loki is very food motivated, so I asked Wendy to reward him by dropping a piece of his favourite kibble where he would find it while chasing the toy. This would also satisfy his need to catch and eat what he was chasing. Of course, it also helped to keep him from getting too worked up during the game.

Meera wasn't too interested in food, but she really enjoyed being able to chase and pounce on the feather at the end of the toy.

We kept the play sessions short as I didn't want either of the cats to become too aroused, but the sessions needed to be frequent so that they got used to having fun in each other's company and would come to expect it.

After each session, Wendy would spend five minutes grooming Loki and Meera. This brought about almost instant relaxation, and after an hour both of the cats curled up together to sleep. All in all, our session was definitely a success!

A few weeks later Dr Peter Neville received an email from Wendy, thanking him for all of his help: "Peter, I have such wonderful news. Meera and Loki are now firm friends, and Loki now chooses not to leave the house very much when I'm at work so the new neighbours are pleased!

He prefers to stay with his new best friend, and the two of them spend all their time either on the couch grooming each other or playing with one of the many toys I leave out for them."