Why does my cat miaow at me? 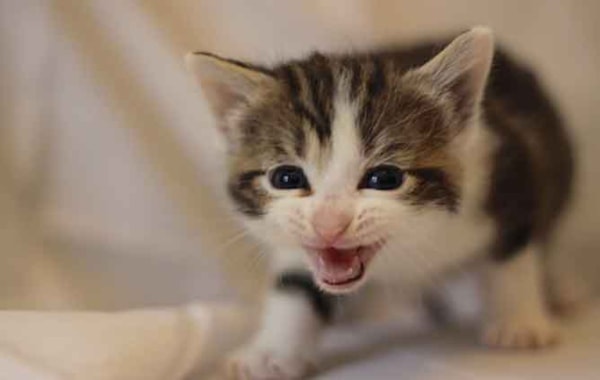 The exact meaning of a miaow remains a bit of an enigma, explains behaviourist Celia Haddon.

(A) Behaviourist Celia Haddon says: The exact meaning of a miaow remains a bit of an enigma, though many researchers have spent time and effort trying to work out the language of cats. Indeed, not all cat owners can agree on what a miaow means.

The problem is that a great deal of feline communication is silent body language (like the tail-up greeting to humans) or scent language (like friendly rubbing) and relatively little cat calls have been classified into three main groups, not by the noise itself but by way they are emitted. There are mouth-closed calls like purring, mouth held open calls like yowling, and mouth opening then closing calls like the miaow.

We are so used to our cats miaowing at us, that we don't realize how rare it is to find in the wild! Feral cat colonies very rarely use the ordinary miaow to talk to each other, as Dr John Bradshaw, author of the best-selling book 'Cat Sense', explains: "I don't think anybody has discovered what it means among them."

He says that each individual cat has to learn for himself how to use the miaow towards his human.

"The cat learns that a miaow gets attention and that after a miaow something rewarding will happen, like getting fed or let out. So it is a learned signal to humans."

"I can generally interpret what she is saying," says Paul. "When she is unhappy, there is a tone of anguish in her miaows. The miaow is deeper in register.

"When she wants to jump on a lap, on the other hand, she gives a different, higher miaow. That higher miaow is one she also uses if she is wandering round the house looking for somebody. And in the evening, when she is hungry for her dinner, she makes this maiow repeatedly with a note of impatience in it. She has a very strong personality!"

So does Paul ever get fed up with the noise? "I grew up with Siamese and we have had several of them," he says. "I love the sound."

Paul may understand Miss Ruby Foo, but research has shown that if her miaows were recorded and played to strangers, most of them wouldn't be able to interpret what she was saying.

At the other end of the noise scale is the silent miaower. A few cats just don't make any noise at all, yet their mouths open and close as if a miaow sound has been made. "We have seen this in feral cats," says John. "Maybe it is just a visual signal."

So what is a miaow? It is a private language between you and your cat. You could say that it is the language of love!