Why is my cat hissing at my other cat? 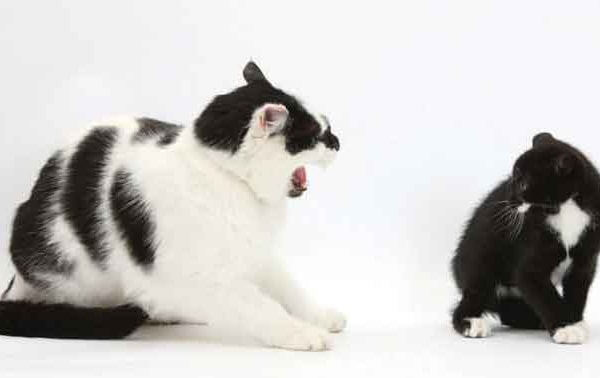 When cats go to the vets, they can pick up scents from other cats or the hands of the staff, says behaviourist Jon Bowen.

(Q) Last year my family got a female rescue kitten. She settled in really well with our other six cats, especially our youngest male. After she was spayed, the male hissed and screeched at her. Now, whenever she goes near him, he hisses at her and walks off. What is happening?

(A) Behaviourist Jon Bowen says: Unfortunately, this is a really common problem. The wild cousins of our domestic pet cats have highly camouflaged coats that enable them to blend in with the environment. This stops them being spotted by prey as well as larger predators. As a result, it would be difficult for cats to identify each other purely on sight, because one set of camouflage stripes looks the same as any other. So, cats evolved a system of scent recognition to compensate for difficulties in visual identification. This also enables them to quickly identify cats they have a relationship with; if two cats rub against each other they will pick up a little of each other's scent to create what is called a 'group odour'. So, when cats meet they can immediately recognize each other's individual scent as well as the group odour that reminds them that the other cat is part of their social group.

When cats go to the vets for an operation, they can pick up the scent from other cats from the table or the hands of the staff, and they can also have some of their own scent stripped off by the cleaning chemicals that are used to prepare them for surgery. Some of the cleaning agents we use also have strong odours that cats find unpleasant. The end result is that a cat comes home smelling different, and sometimes other cats find this alarming. Added to this, the returning cat may still be under the influence of sedatives and anaesthetics that can make them appear and behave oddly.

The advice I give to cat owners is that if a cat goes to the vet clinic for any reason, keep him isolated from other cats for a few hours when he gets back home. This allows the cat to clean and groom himself, and remove any funny smells that he has picked up. Then give the cat a rub all over with same bedding used by the other cats in the household in order to re-establish some of the group scent. Only once the returning cat is fully relaxed and back to normal should you allow him to meet the other cats. If there is any sign of hostility, separate the cats and allow a little more time for normal scent to be established.

Once a problem has already arisen, with cats hissing and growling at each other for several days, then the only option is to go through a standard introduction approach as if the cats had never met.